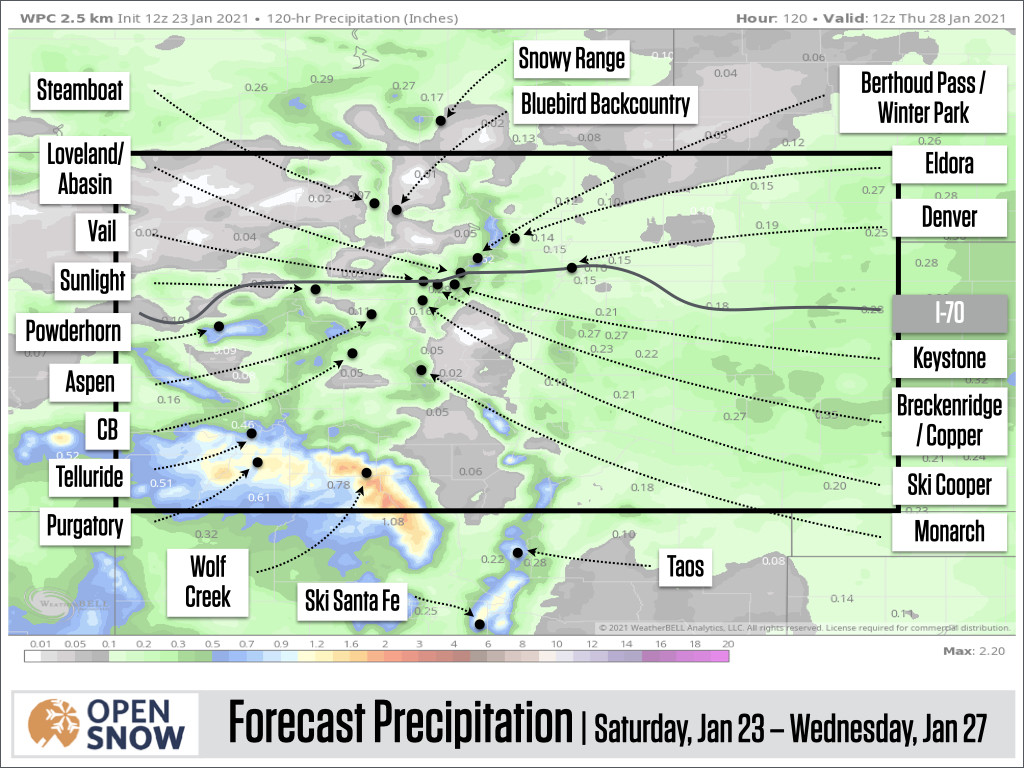 Southwest flow delivered 6-16 inches to favored mountains on Friday night. Southwest flow will continue with multiple waves of snowfall through early next week. While other mountains should see at least a few inches of accumulation, the deepest accumulations will occur in the southwest. Did I use the word "southwest" enough?!

Snow showers fell across the state though accumulations were limited. This was the day before the storm really cranked up.

The storm cranked up with intense snow over the far southern mountains and moderate snow for mountains farther to the west.

Here is the snow stake cam at Purgatory. 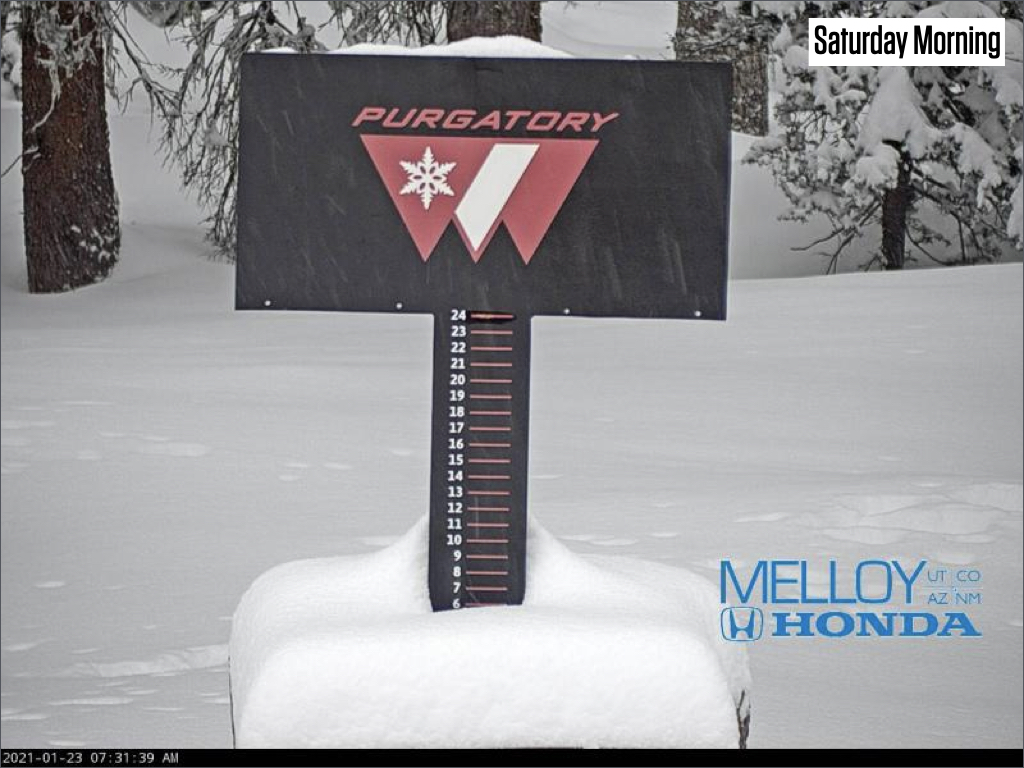 Snow will continue to favor the areas that it has already favored, namely the far southwestern mountains (3-10 inches) and also areas farther to the west (2-6 inches). As a wave of energy pushes across the state, we could see some flakes (a few inches) for areas that are not favored by the southwest flow. But as you see on our radar, the name of the game is southwest flow.

This could be a short lull in the snow, though flakes may find a way to continue over the far southwestern mountains.

This could be a time that actually favors the northeastern mountains near I-70 and near and east of the divide. As Monday's energy pulls away to the east, it could induce at least a few hours of steady snow and 2-6 inches of accumulation. Eldora, Winter Park, Berthoud Pass, and nearby areas could be favored.

Another wave of snow will focus on the far southwestern mountains with 3-10 inches while other mountains continue to see just dribs and drabs with a few inches possible.

This map says it all. Southwest flow will heavily favor the far southwestern mountains with 6-24 inches of additional accumulation through Tuesday night. Other mountains will only be favored if they are farther to the west, or on Monday night, the northeastern mountains will have a short time in the spotlight. 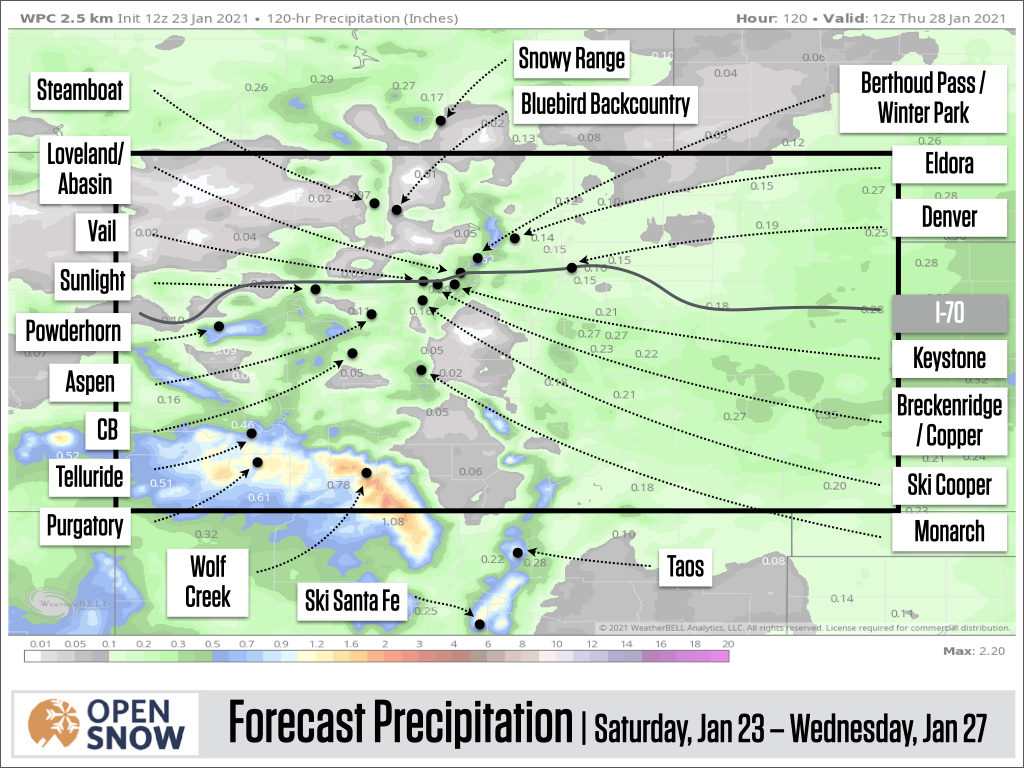 I see two distinct chances for snow in the longer-range forecast.

Saturday, January 30th will be our first chance for snow. This storm looks like it could be on the weaker side.

Wednesday, February 3rd will be our second chance for snow. This storm looks like it could be on the stronger side.

NOAA's precipitation outlook through early February is delivering news that just isn't awesome for us but will be good for areas to our west.

From January 28 to February 1st, California should get walloped. 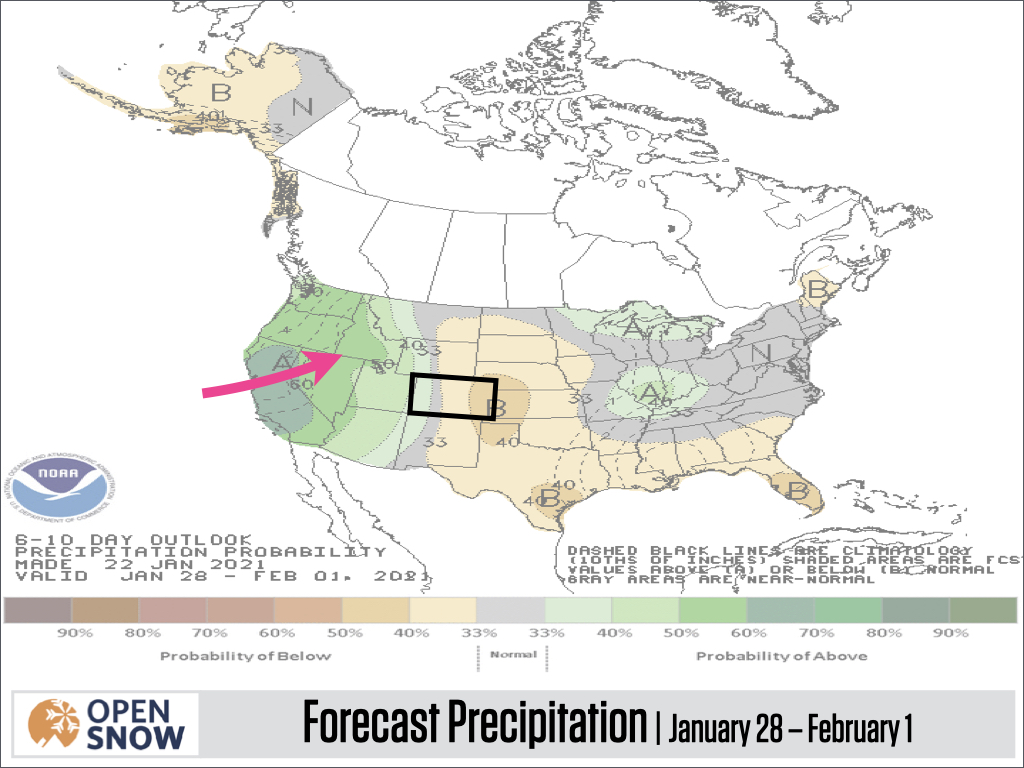 From January 30 through February 5, the higher chance for a lot of snow should shift to the Northwest. 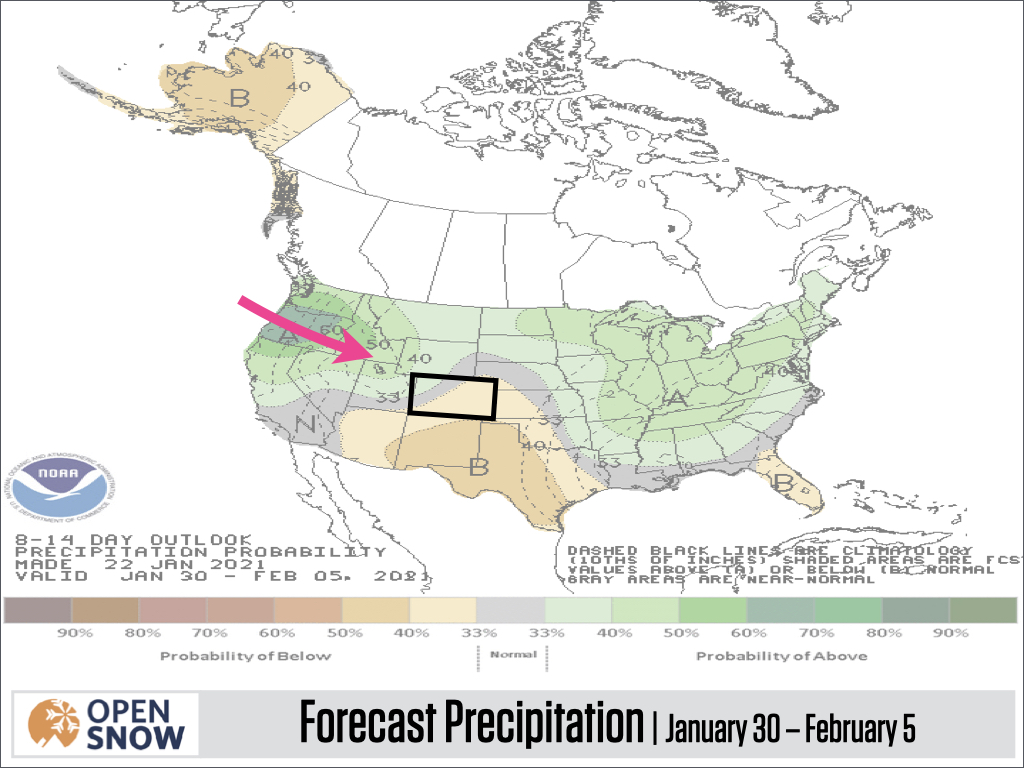 This longer-range forecast doesn't make me super pumped for big snow here in Colorado, but at least we'll see chances for storms now and again, and maybe we'll get lucky.