Thursday freshies in the east, next storm on Friday night & Saturday 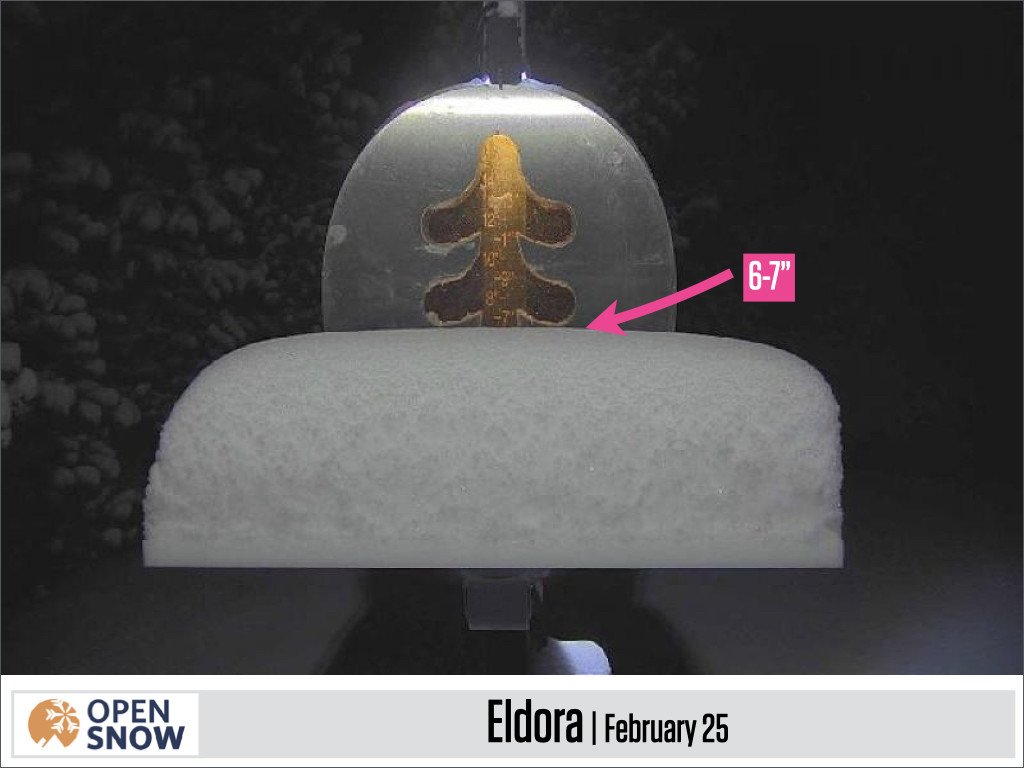 Wednesday night brought intense snow to areas east of the divide with double-digit totals in the Denver area, 6 inches at Eldora, and 1-4 inches for other less favored mountains. On Thursday we'll see dry weather with a few showers over the south. The next storm from Friday afternoon through Saturday afternoon will deliver 3-10 inches to the northern and central mountains.

Wednesday was a dry day across the state.

Going into this storm, we were thinking 5-10 inches for the foothills, 3-7 inches for Eldora and Rocky Mountain National Park, and 0-3 inches for areas near and west of the divide.

Below are the actual totals as of Thursday morning:

The deepest ski area total of 6-7" can be verified by looking at the Eldora snow stake cam. 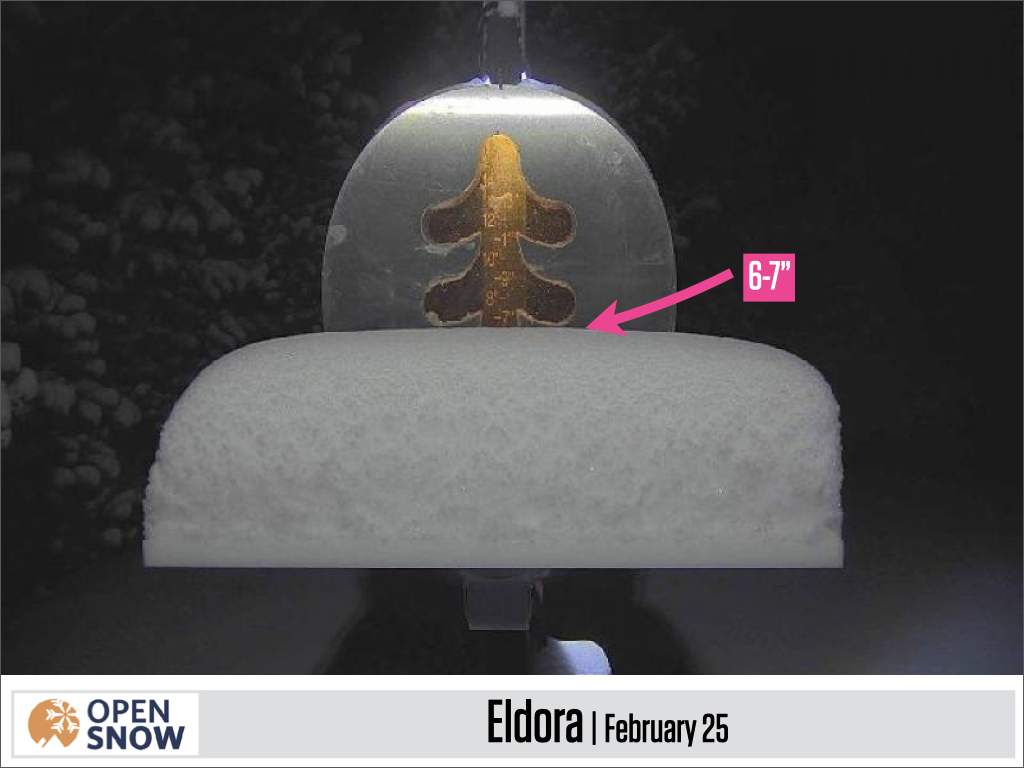 Overall the Wednesday night forecast worked out rather well. As people that like to slide downhill on snow, we would like to see more snow fall on the mountains compared to the city. But Colorado is an arid state, and getting moisture to fall from the sky is a great thing even if it falls on the flatlands and doesn't produce a mountain powder day at most spots.

Thursday will be mostly dry as the storm from Wednesday night moves away. Snow showers could linger for the southeastern and southern mountains during the day.

The next storm will bring snow from Friday afternoon through Saturday afternoon. We should feel pretty lucky to see snow during this time because just a few days ago it looked like the storm would track around Colorado rather than through Colorado which would have led to less snow. 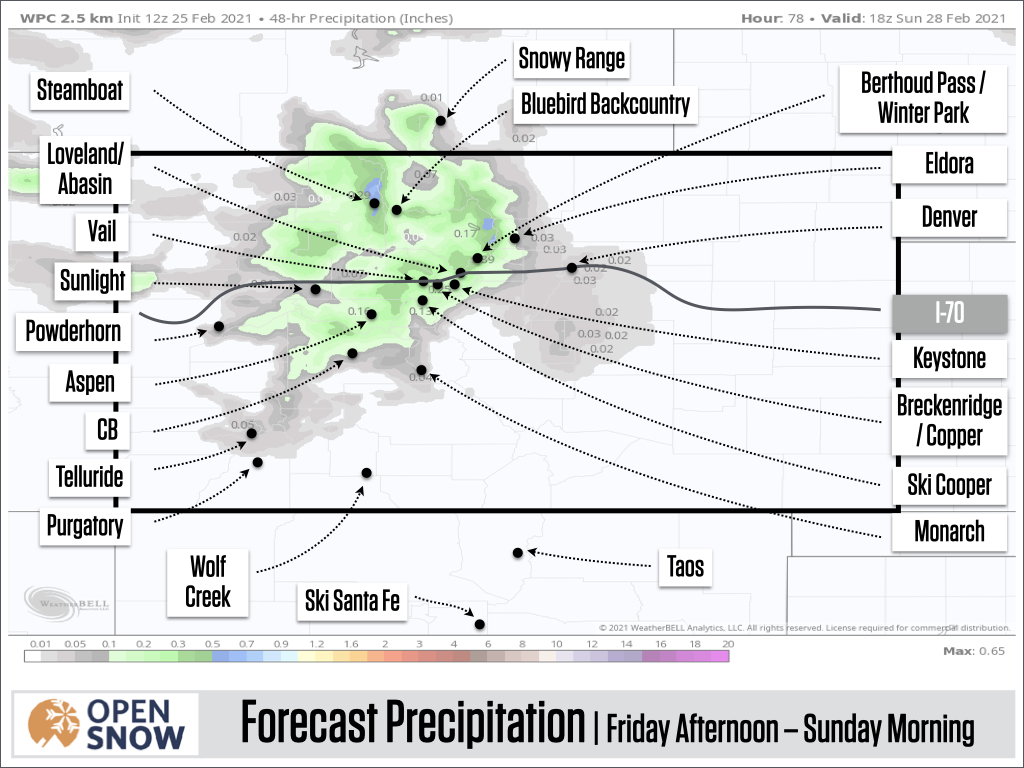 Most models show that the most snow will fall in the central and northern mountains, roughly from Aspen north to I-70 and north to the Wyoming border. The map above shows precipitation and we can multiply by about 15 to estimate snowfall.

The wind direction during this storm will mostly be from the west and this could favor the Aspen area, Beaver Creek, the higher elevations of Summit County (Copper, Breckenridge, Keystone, Arapahoe Basin, Loveland), perhaps along the divide around Berthoud Pass, Eldora, and Rocky Mountain National Park, as well as Steamboat.

The bottomline is that the best powder will likely be on Saturday with at least some fresh snow to start the day and more falling during the day. If snow showers persist into Saturday night, there could be more powder to enjoy on Sunday morning, though I am more uncertain about Sunday morning's powder potential.

February delivered above-average snowfall to the northern 2/3rds of Colorado, but it does not look like the beginning of March will keep the powder streak alive. Instead, the first 1-2 weeks of March looks like it will trend to the drier side.

Even with a drier forecast coming up, there will still be chances for storms. I see a chance around March 3-4 and again around March 8-9. While most models do not show big snowfall associated with these systems, maybe we'll get lucky.

Between about March 10-15, most models show a stormier pattern setting up over the west coast. We'll have to watch if this pattern does develop, and, if it does, if it translates into more moisture and snow heading east into the Rockies and here in Colorado.