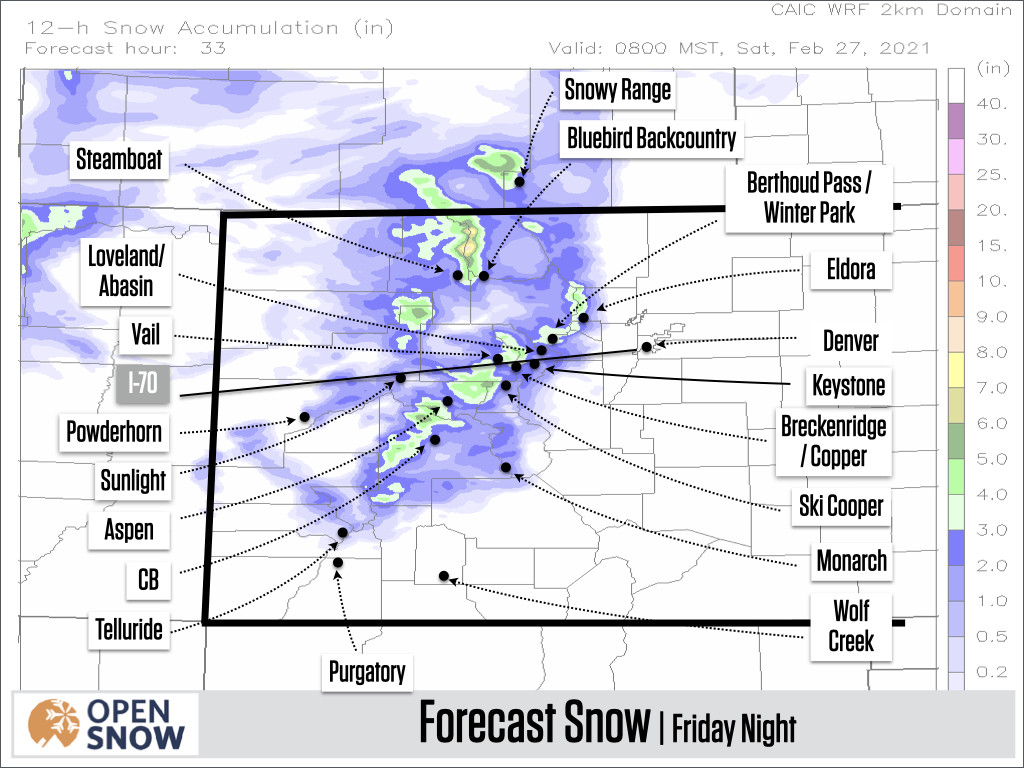 Friday will bring a few snow showers but likely little to no accumulation. On Friday night, most mountains will see 2-6 inches, and then on Saturday midday, an additional 0-4 inches will fall. This timing means that the best snow should be on Saturday morning through Saturday midday. After that, our next chances for snow will be around March 4 and March 7.

Thursday morning was fluffy for many eastern areas with 6 fresh inches at Eldora and 9-10 inches in the southeastern foothills. 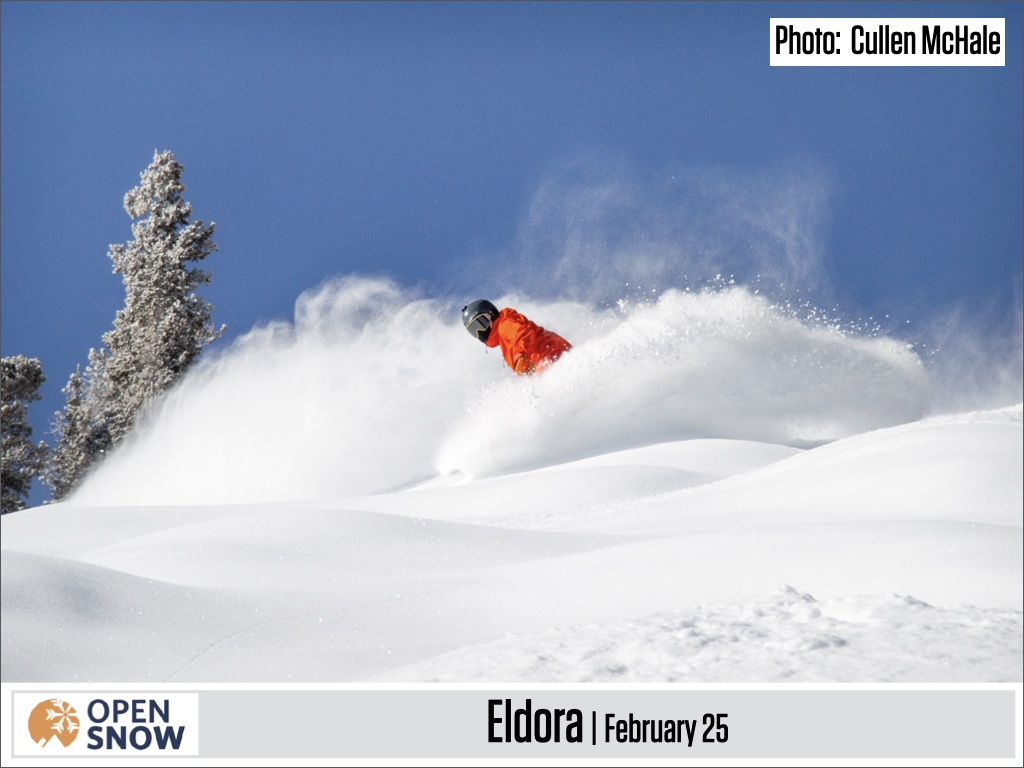 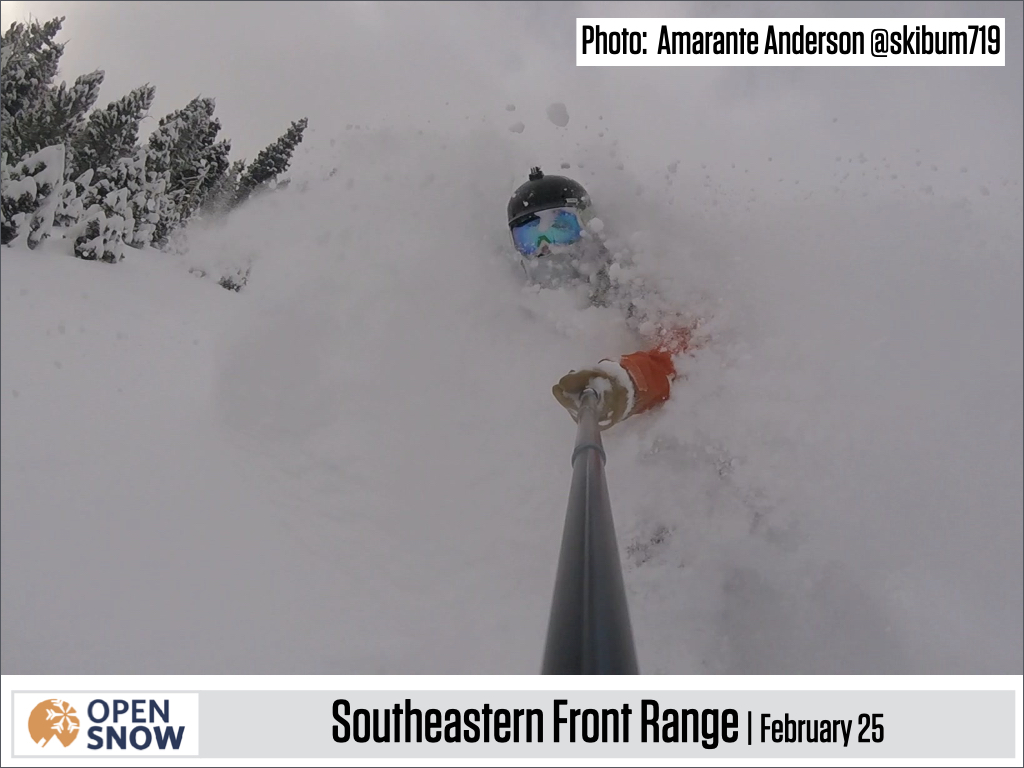 The weather during the rest of Thursday was generally dry across the state with just a few lingering showers mostly over the southern mountains.

The next storm will bring snow from Friday night through Saturday afternoon with 2-10 inches of accumulation for most mountains. It took until about 12 hours before the storm started to gain clarity on these details, but it finally looks like all models are on board with the forecast timing and snow accumulation.

On Friday night, a band of snow will push from north-to-south across Colorado and the northern mountains, central mountains, and the northern San Juans should see 2-6 inches of snow. I am calling this snow for Friday night, though it looks like the timing will drift a little bit into Saturday mid-morning so some of this snow could call after the Saturday morning 500am snow reports. 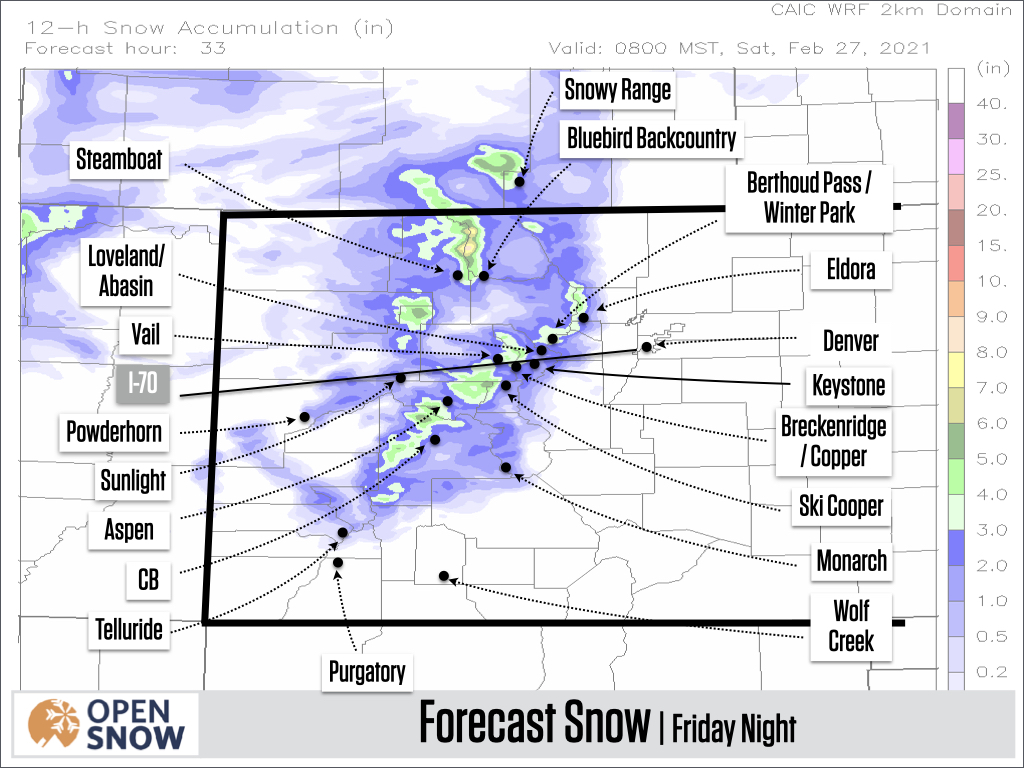 On Saturday morning there should be fresh powder to enjoy, and as I mentioned, there could be more on the hill than what you see on the morning report. There could also be a lull in the snow once the band moves through most mountains by mid-morning.

On Saturday late morning through Saturday afternoon, showers will pop up across mostly the northern and central mountains and these showers will move west to east. Snow accumulations could be from 0-4 inches. Most mountains will likely not see much snow, but for areas under a persistent west-to-east band, snowfall could be intense for a few hours with at least a few more inches of snow. 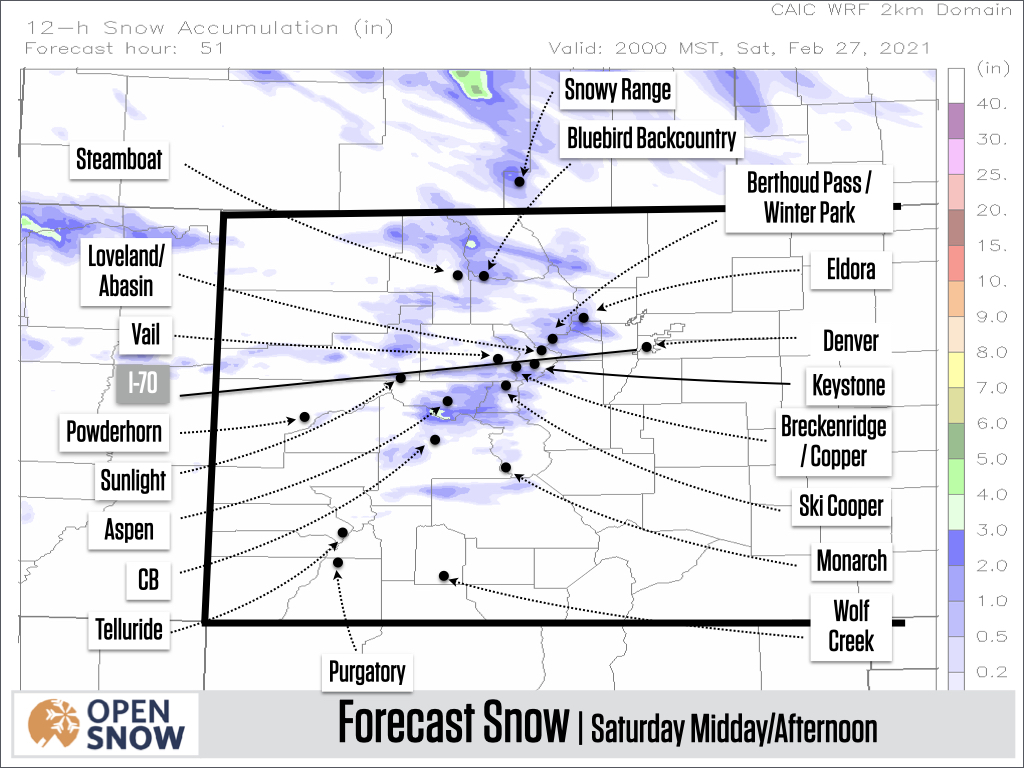 The bottomline is that Saturday should be a low-to-moderate end powder day for most mountains with the best chance to enjoy the powder in the morning and some mountains will get additional snow accumulation throughout the midday and afternoon.

Sunday will be a dry and cold day with highs in the teens.

Monday, Tuesday, and Wednesday will be dry with warmer temperatures and highs in the 20s and 30s.

Our next chance for snow will be around Thursday, March 4th. This is likely going to be a weak system that should bring little to no snow, but, if it happens to track directly over us and can pick up moisture from the southwest, then maybe we'll see decent snow after all.

Below is the 5-day average weather pattern forecast for next week, Monday, March 1 to Friday, March 5. In general, we will see dry weather (except for that chance of snow on March 4th). 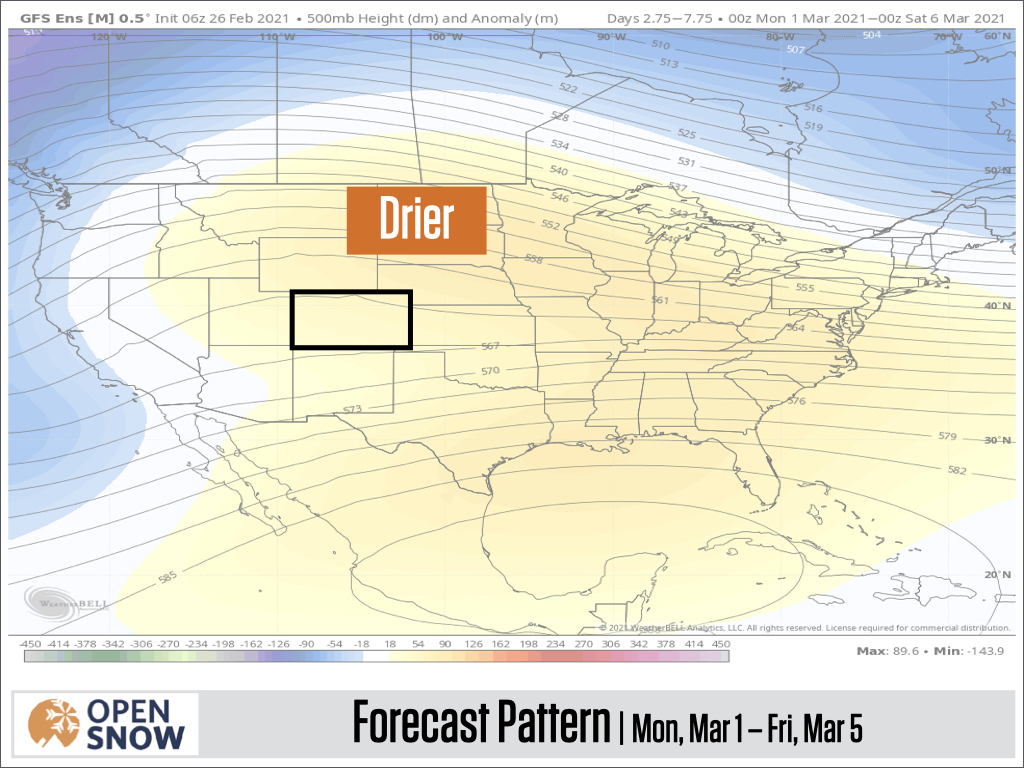 Then during the following week, we will see a switch toward a stormier weather pattern setting up over the west coast between about Monday, March 8, and Friday, March 12. 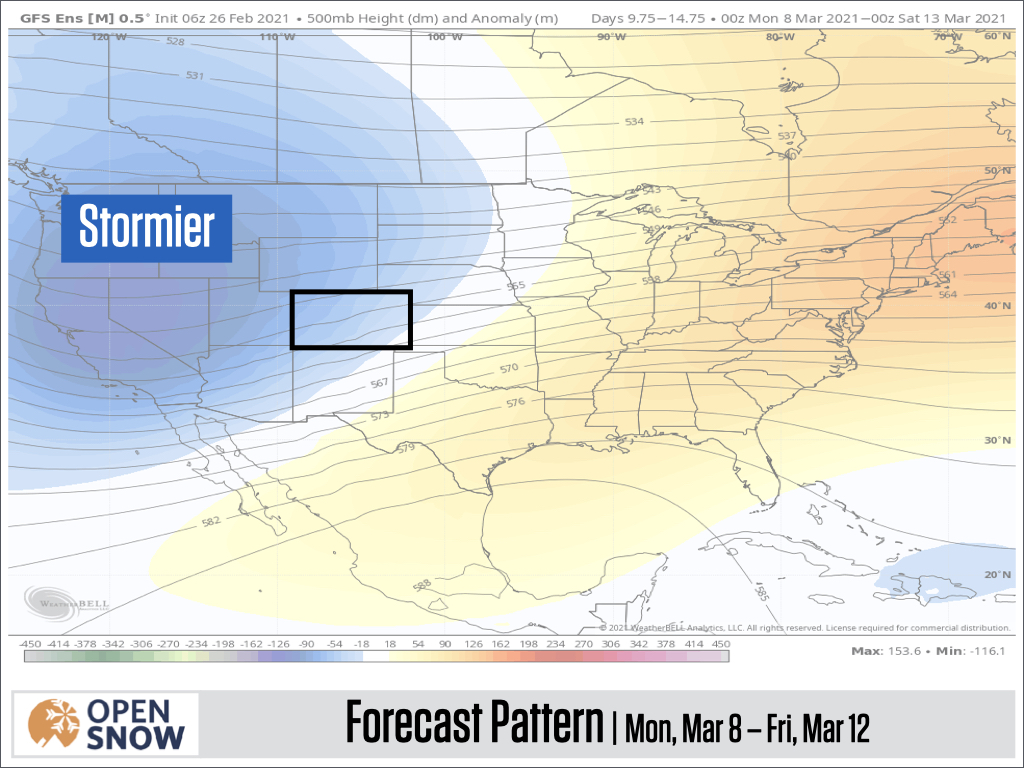 As this stormier west-coast pattern develops, we might see our next chance for snow around Sunday, March 7th. And after that, we'll just have to wait and see if any of the west-coast energy makes it east into Colorado.