Cooler temperatures and some snow Tuesday into Wednesday 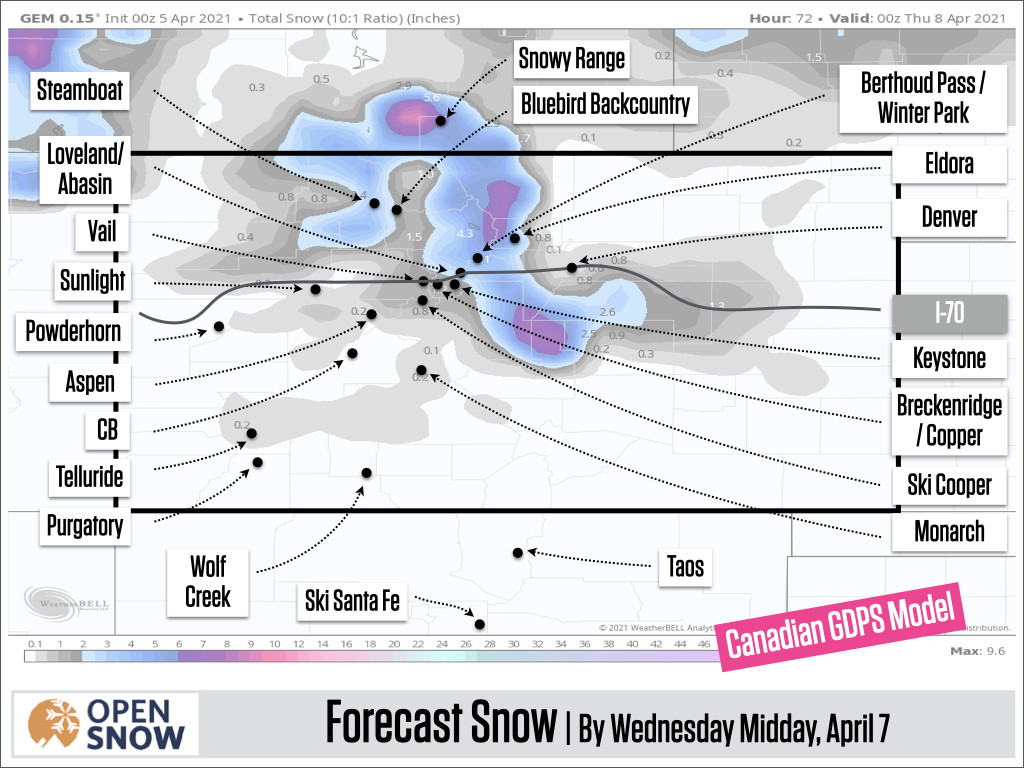 Monday will be the final very warm day of this cycle. On Tuesday, expect temperatures in the 30s and snow showers. On Tuesday night, the northern mountains have the best chance of measuring a few inches of snow, which could create a little bit of powder for Wednesday morning. The next chances for some snow should be around Sunday, April 11, and during the week of April 12-16.

Sunday was another very warm day with on-mountain high temperatures in the 40s and 50s. We saw more clouds in the afternoon with some virga (precipitation falling from the sky but evaporating before it hits the ground). There may have been a few drops of precipitation that did hit the ground, but mostly it was a dry day.

Monday will be our final very warm day with on-mountain high temperatures again rising into the 40s and 50s. The early-morning satellite imagery shows that some clouds should drift into Colorado throughout the day, though this cloudiness could be less than what we saw on Sunday.

Tuesday into Wednesday is when we'll see chilly weather and a chance for snow mostly over the northern mountains.

On Tuesday, expect temperatures in the 30s with scattered snow showers.

Then from Tuesday night through Wednesday midday, we'll see a greater chance for accumulating snow, especially over the northern mountains, roughly near and north of I-70.

Most models, like the European ECMWF, continue to forecast just light amounts of snow (a coating to 2 inches) by Wednesday midday. 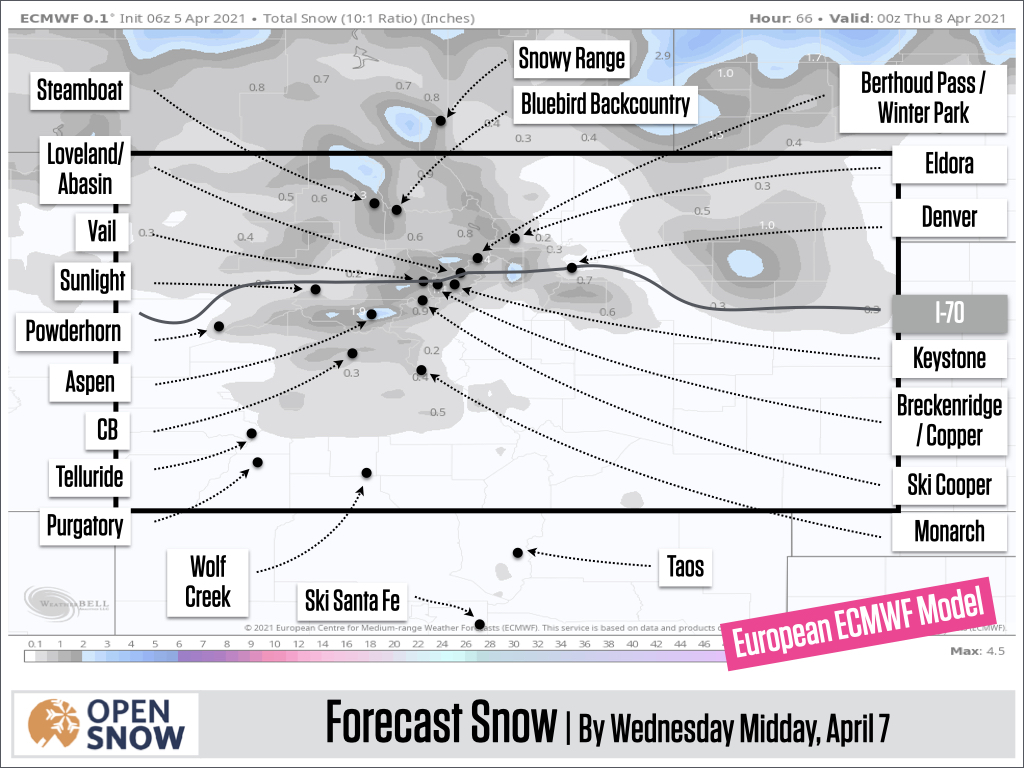 However, since the storm will be rather strong as it passes across Colorado, there is a chance for a moderate upside surprise with up to 4-6 inches somewhere, most likely along the northern divide. The Canadian GDPS model shows this upside potential, especially along the divide. 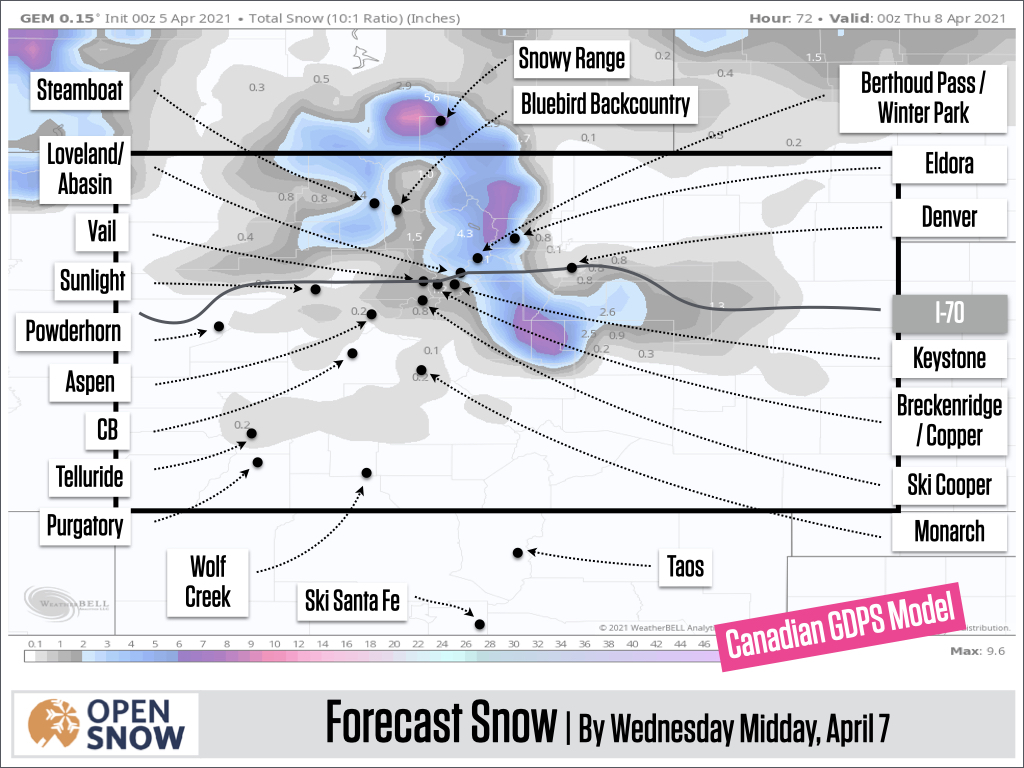 The bottom line is that Tuesday and Wednesday will be cooler days with high temperatures in the 30s, and Wednesday morning should offer the best chance to enjoy a few surfy inches of snow over the northern mountains.

Thursday should be sunnier and warmer with high temperatures in the 40s.

Friday could be cooler (highs in the 30s) as a storm drifts near but stays north of Colorado.

Saturday will be a little warmer (highs in the 40s) and likely dry.

Sunday could be cooler (highs in the 30s) and there might be some snow over the northern mountains as yet another storm drifts by to our north.

Looking ahead to the week of April 12-16, there is a possibility of just about anything.

The latest European EPS model has backed off the potential storm and keeps us mostly dry. The latest Canadian GEPS model is hanging onto at least some snowfall. And the latest American GEFS model is refusing to let go of the idea of a pretty significant storm. 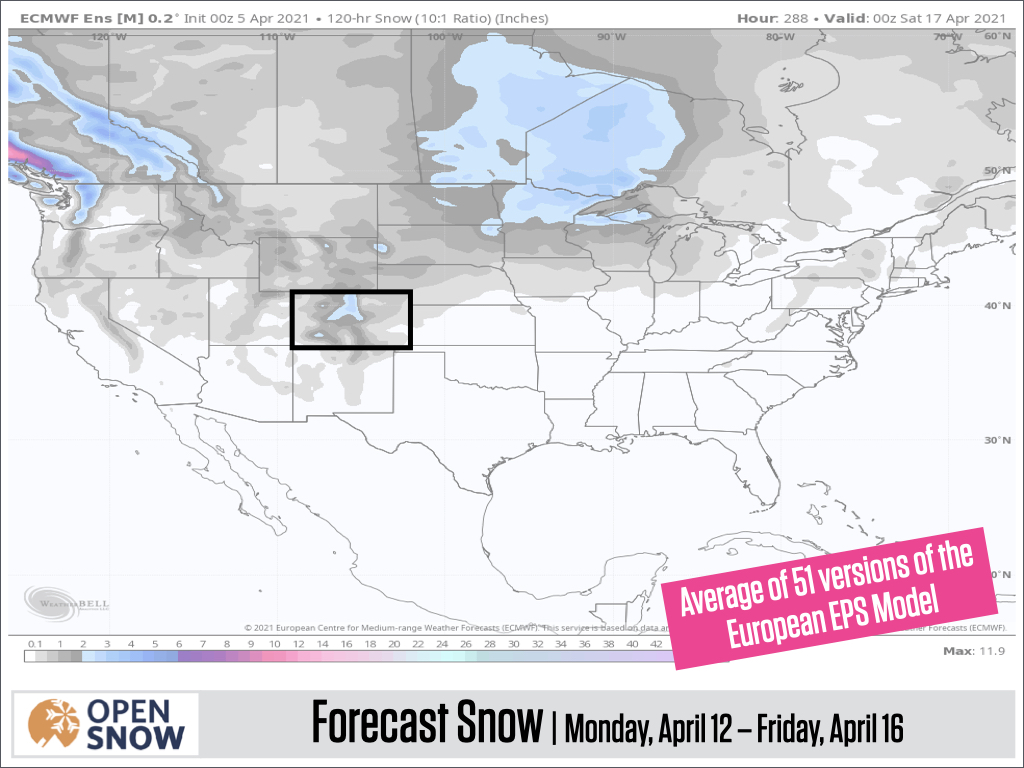 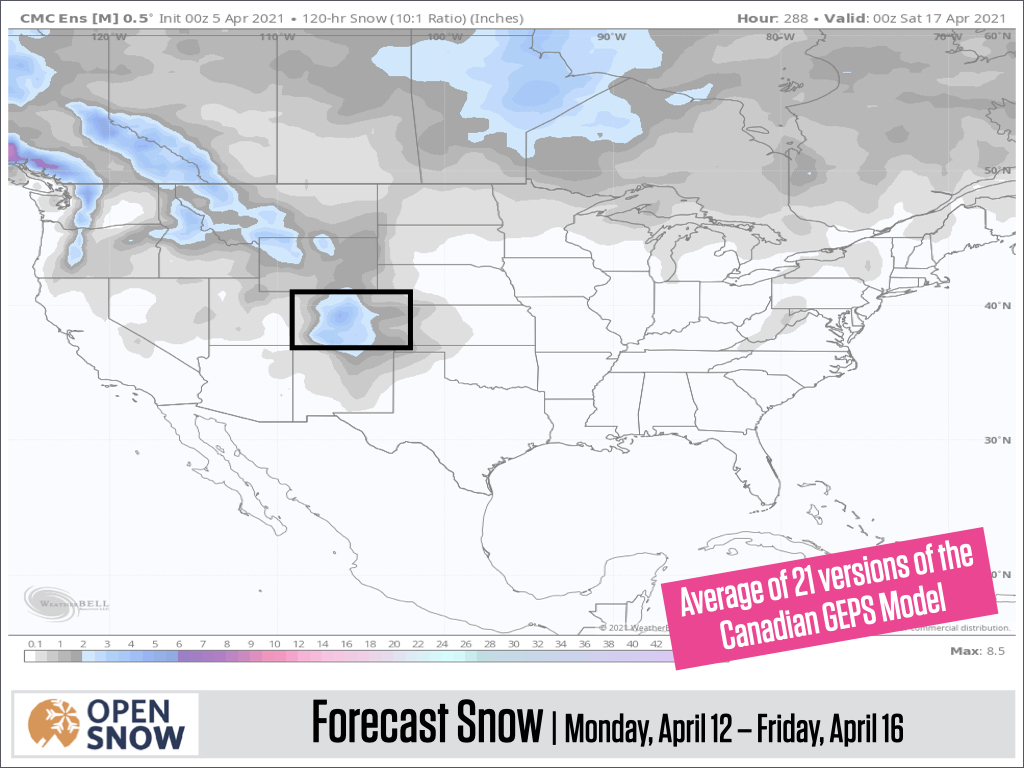 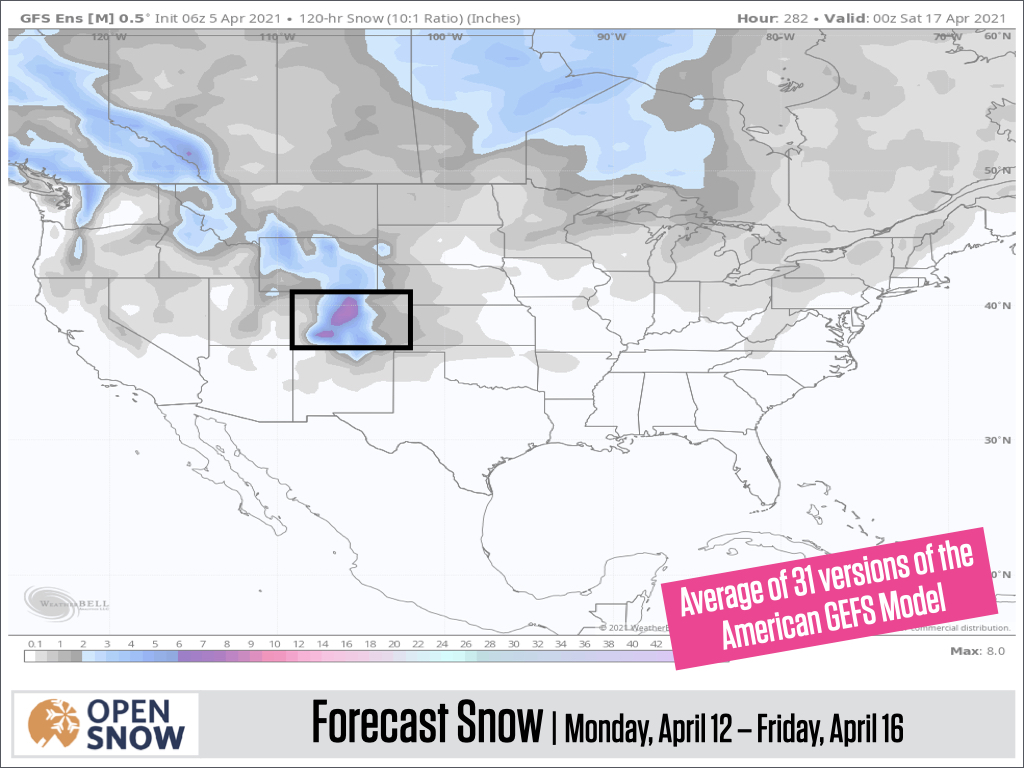 In an ideal world, the average of many model versions would not shift in a big way from day to day, as the European model did by backing way off the storm that it was forecasting just 24 hours ago. But we cannot perfectly model the atmosphere and even these multi-model averages are prone to swings.

The bottom line for next week is that we should keep an eye out for a significant storm but it's far from a lock.

I asked parents to send me a few pictures of them skiing with their daughters since I had posted a lot of father-son pictures and wanted to mix it up. Below is the last picture that I have to post.

Here are Harper and her dad Sam enjoying a day at Copper Mountain in March. Sam asked me to ask you to consider a donation to the Friends of CAIC (he also included the product placement in the photo:-). 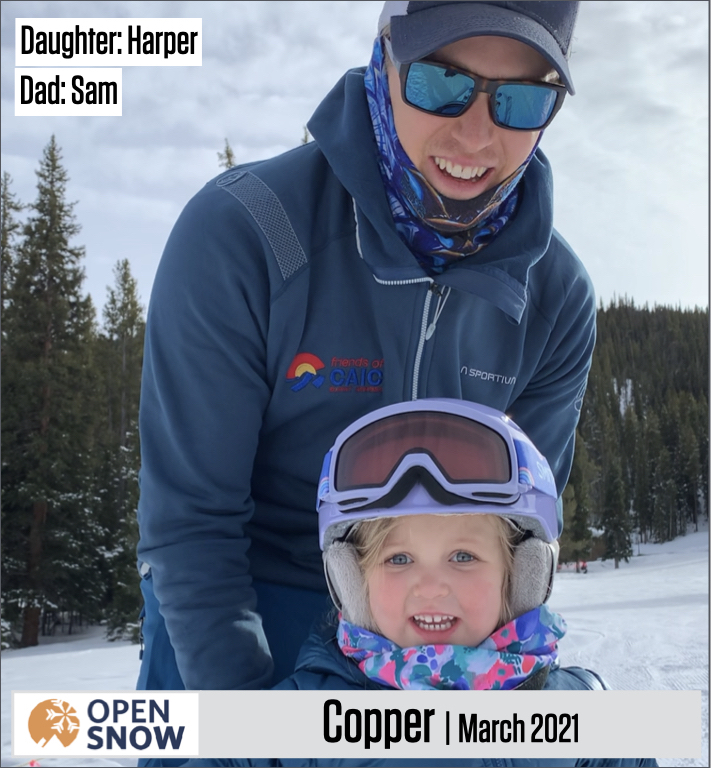