Look for snow on the peaks on Thursday into Friday morning 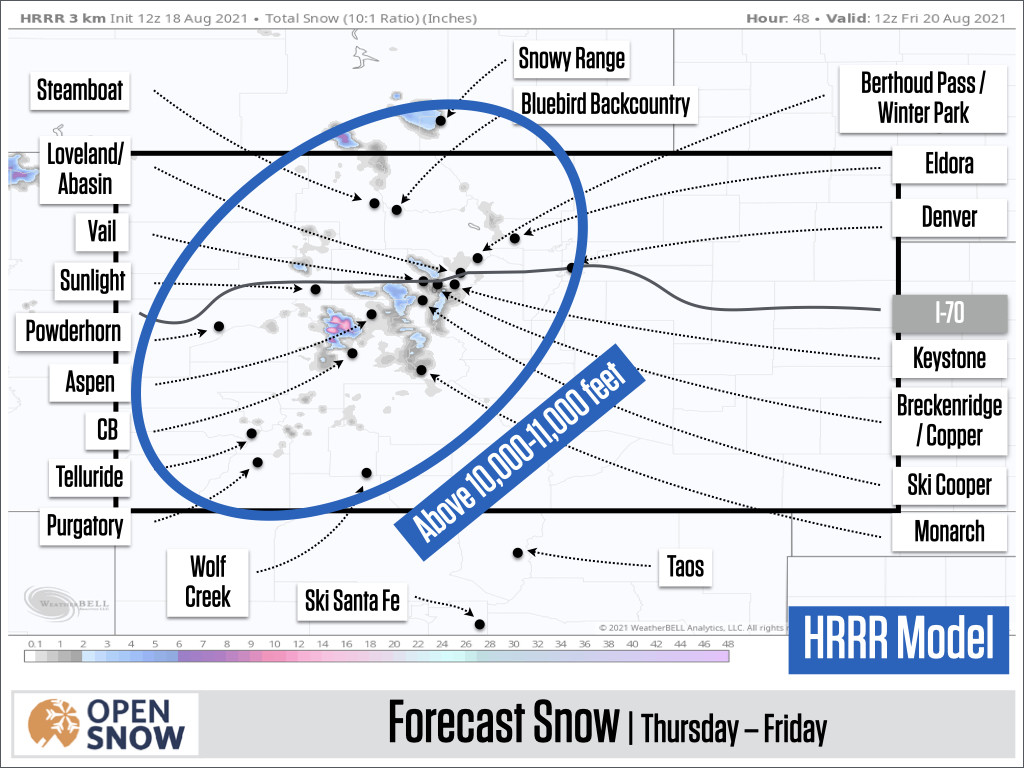 It has been a warm and smokey summer, but happily, snow is on the way! Temperatures should turn cold enough for many high peaks above 10,000 feet to see snow accumulations during Thursday and especially Thursday night into Friday morning. As the clouds clear on Friday early or mid-morning, I'm hopeful that we'll see white-capped mountains.

It's been a challenging summer with smoke, bad air quality, and at times, intense rain on top of bur scars from previous wildfires which resulted in debris flows. One of these debris flows closed I-70 through Glenwood Canyon for an extended time.

If you are not using our OpenSummit app and website to track the current air quality, the 48-hour smoke forecast, and the detailed weather forecast for your next summit attempt, please download the app. If you're an All-Access subscriber to OpenSnow, you get all the features of OpenSummit at no additional charge.

The 48-hour smoke forecast and 48-hour radar forecast maps (from the HRRR model, updated hourly) are what I look at multiple times per day throughout the summer. I know of no other mobile app that provides these high-resolution maps that load quickly, can be 'scrubbed' through quickly and without lots of buffering, and allow you to zoom in/out to any place in the US and southern Canada. Yes, I'm biased about OpenSummit because we built the app, but truly, it's a very useful service!

Ok enough about the summer. Let's think about snow for a moment.

A late-summer storm with cool temperatures will bring rain showers and snow accumulations on Wednesday, Thursday, and into Friday morning. A storm like this is NOT rare for late summer here in Colorado. But that doesn't mean we should take it in stride. Instead, it's an excuse to get excited for fun weather coming up!

On Wednesday, expect a lot of afternoon showers over the mountains.

On Wednesday night, some models show that a lot of showers will continue, so it could be an atypically rainy evening. By late Wednesday night into Thursday morning, the snow level should be around 14,000 feet, so the highest peaks could see a bit of snow.

On Thursday, additional showers will fall over the mountains throughout the day. The snow level will likely stay around 13,000-14,000 feet, so the highest peaks could again see some snow accumulation.

*** If you're hoping to see snow-capped peaks, the best time to look will likely be on Friday early or mid-morning as the snow/rain ends and the clouds clear. ***

The total precipitation forecast from Wednesday through Friday morning will be significant over the western half of Colorado. Orange colors show an average of 1 inch of precipitation, though the actual accumulation will be much spottier due to the random nature of thunderstorms. 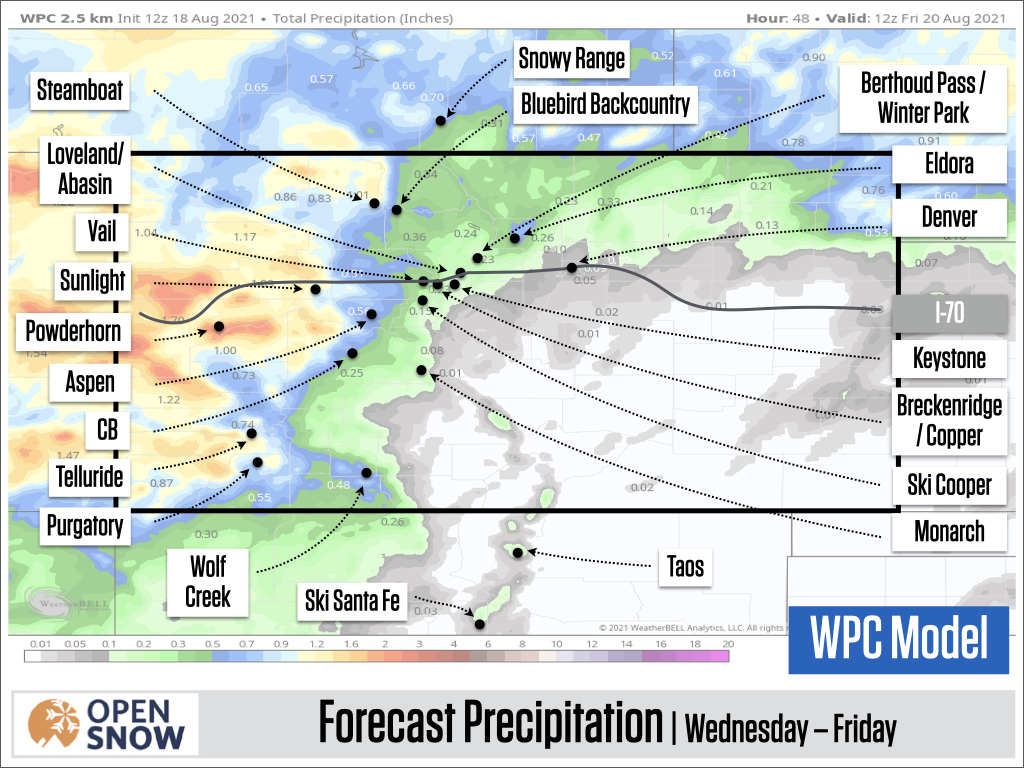 The snow level forecast will be lowest on Friday morning, getting down to about 10,000 to 11,000 feet (green colors). 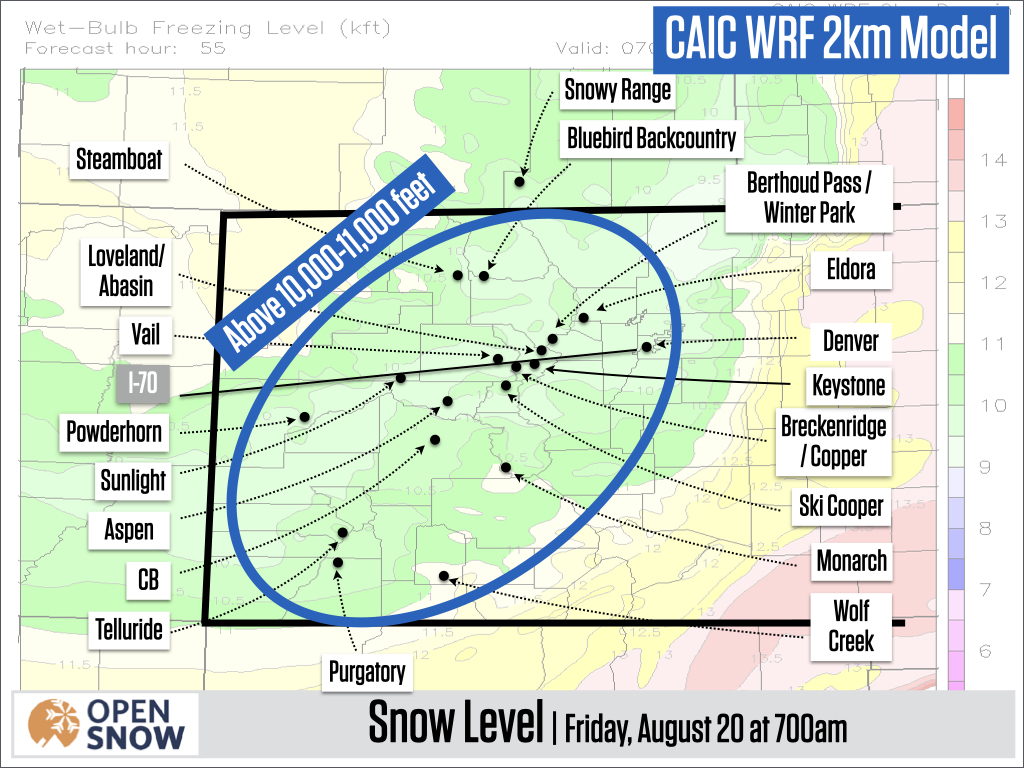 The multi-model snow level forecast from our own internal data (we're working on a LOT of awesome stuff, stay tuned) confirms the CAIC WRF 2km forecast above. Late Thursday night and early Friday morning will be the time with the lowest snow level. 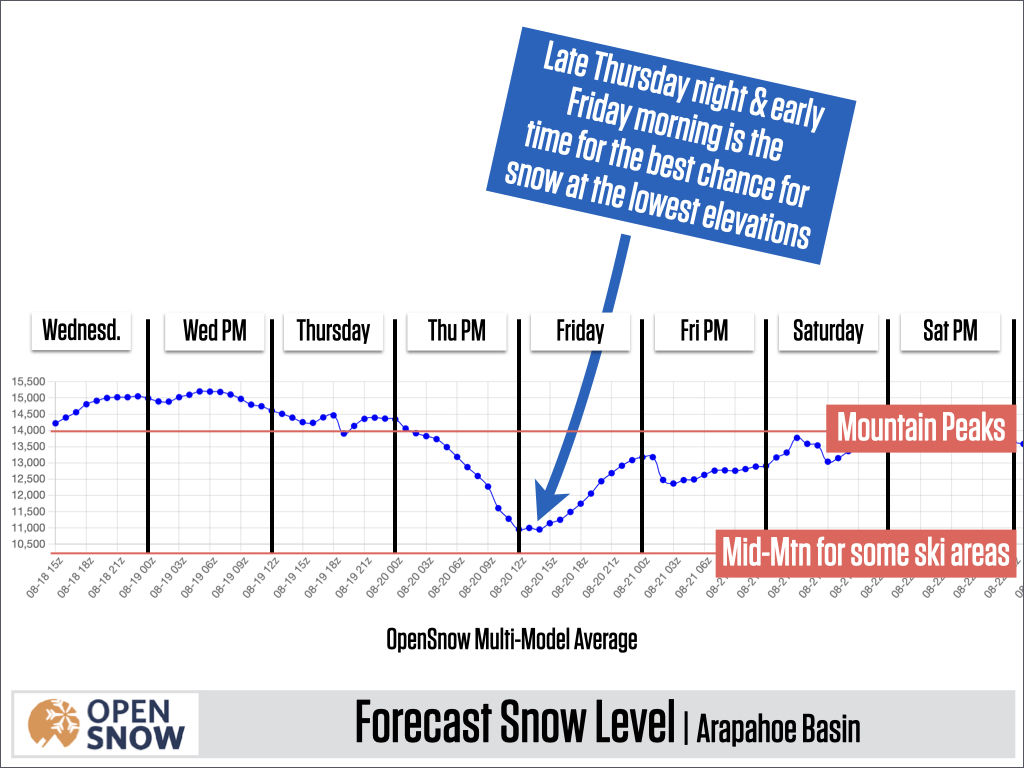 The snow forecast shows scattered accumulations across most of the highest peaks in Colorado. Accumulations could be anything from a dusting to 4+ inches if a few intense cells hit a certain mountain. 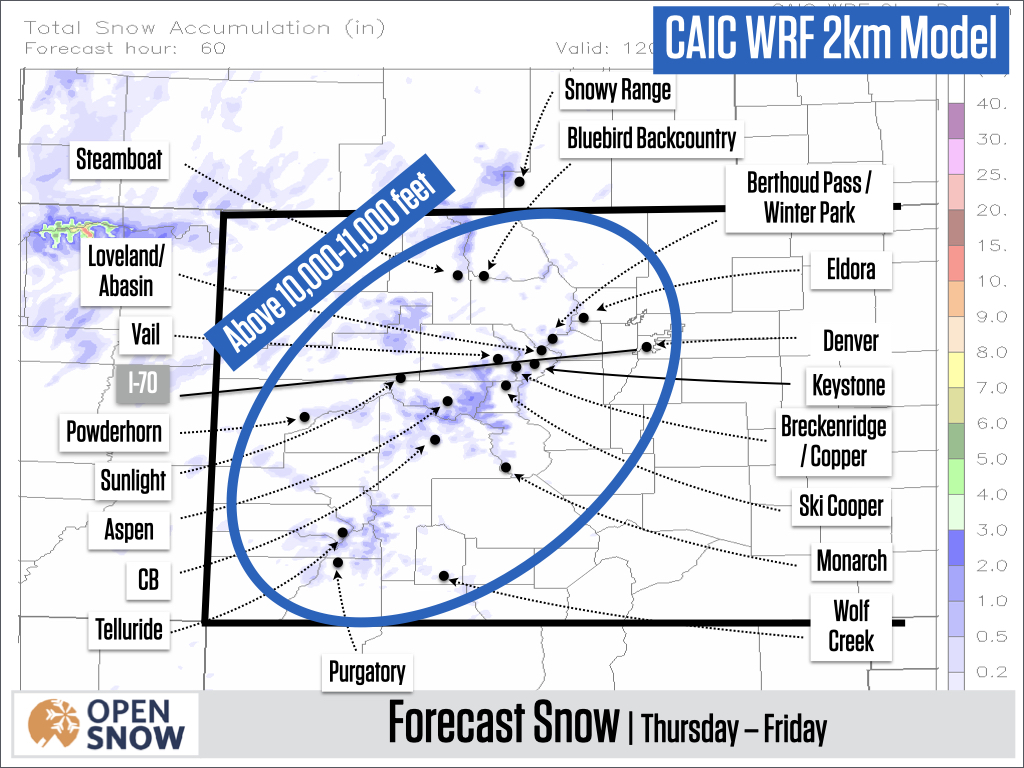 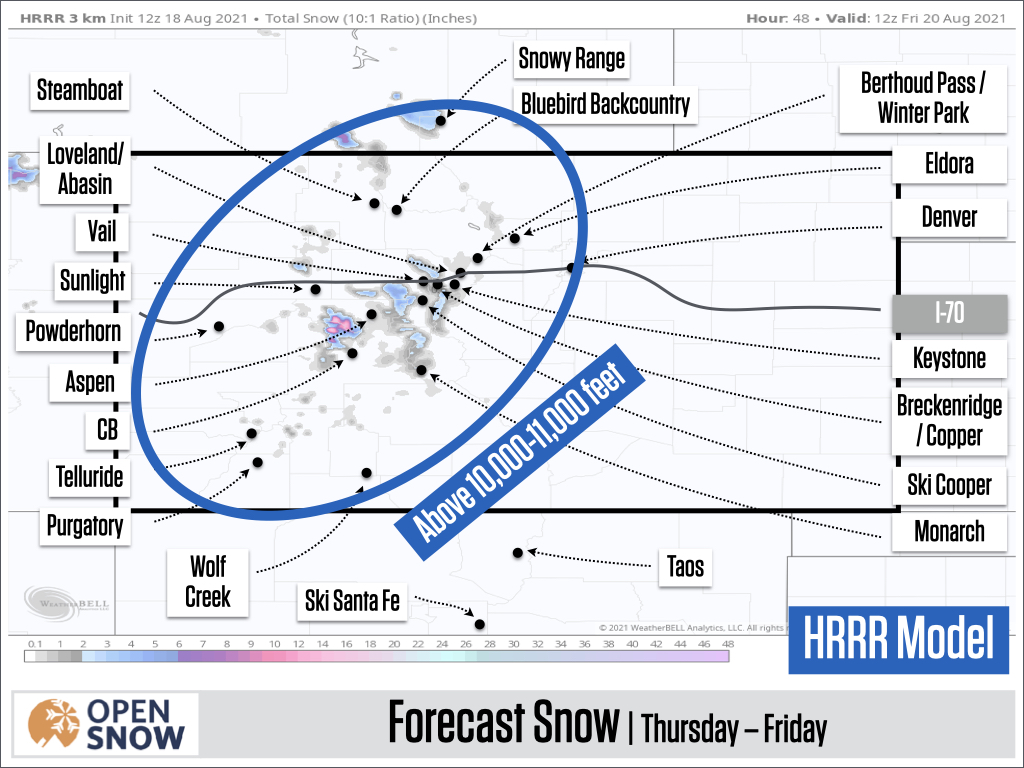 Enjoy the storm, let's hope for some snow, and on the other side of the coin, let's hope that the most intense lower-elevation rain showers happen to miss most wildfire burn scars and do not lead to additional debris flows.

What's coming up after this week's storm?

Not much. We'll stay cool through Saturday then return to warmer weather on Sunday and beyond. Winter isn't here yet!

Speaking of winter, there will likely be a La Nina this season (cooler water temperatures in the central Pacific Ocean). The only near-guaranteed result of a La Nina winter is for average to above-average snowfall in the Pacific Northwest and maybe into the Northern Rockies. Here in Colorado, past La Nina winters have generally brought average to above-average snowfall, but not always, as last winter showed us. So there's not much we should read into the upcoming winter forecast at this point.

I'll be back with another post when there's another chance for snow, likely in September.