Some snow Wednesday, then looking to December 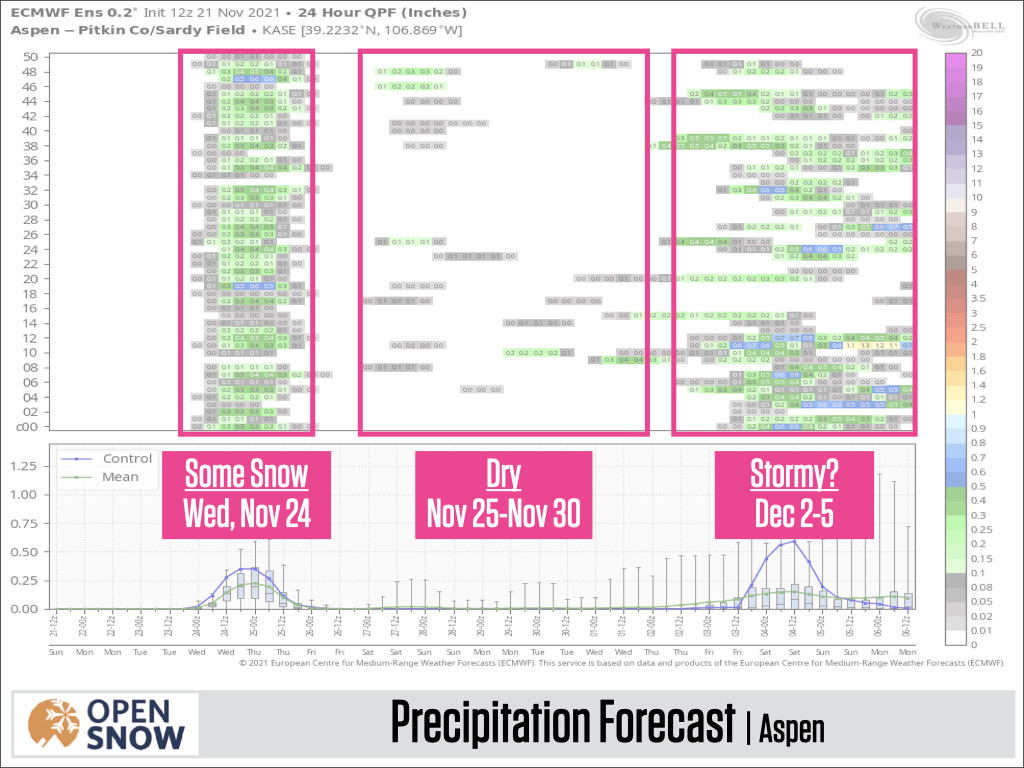 Monday will be a warm and dry day, then from Tuesday afternoon through Wednesday, a weak storm will bring some snow to the southern and central mountains with light accumulations possible for the northern mountains as well. After that, the rest of November will be dry, and we'll look for a potentially stormier weather pattern in early December.

Sunday morning was fun as it started to look a bit like winter in the northern mountains with the clouds clearing and the moonlight illuminating a fresh coat of snow. 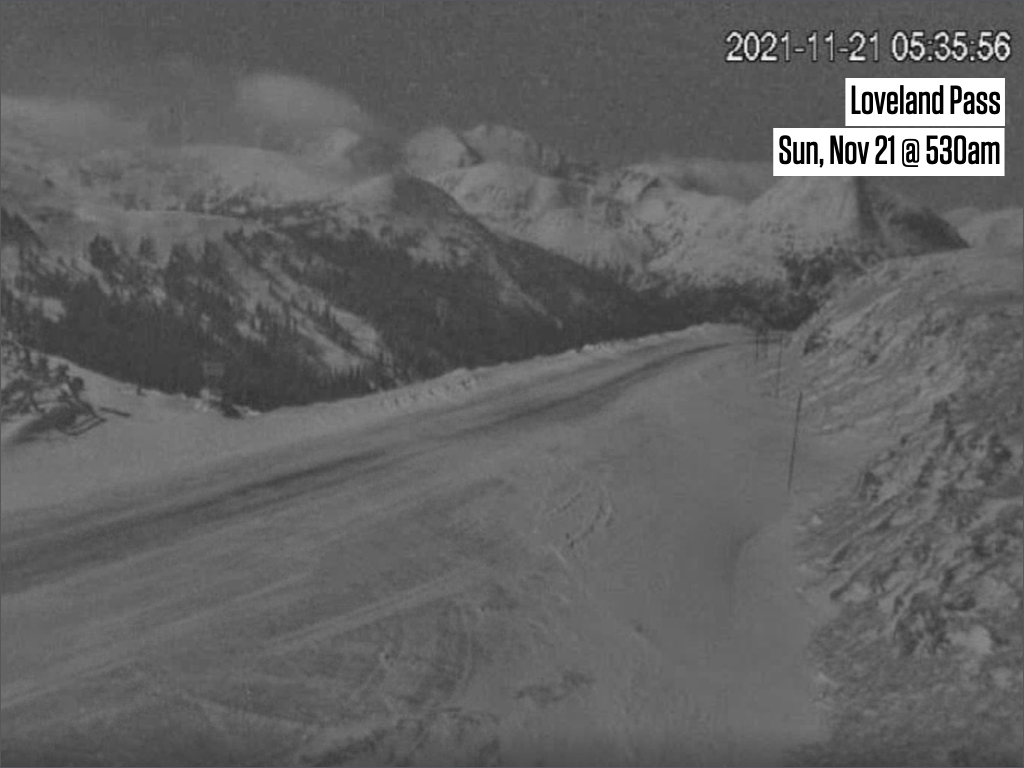 Once the clouds cleared on Sunday morning, the rest of the day was sunny and dry.

On Sunday night, temperatures were cold enough for snowmaking. But on Monday, there will be sunshine and warmer temperatures that will rise into the 30s and 40s, which will mean no snowmaking during the day.

On Tuesday, we'll start dry, then on Tuesday afternoon, a surge of moisture from the southwest should bring some snow to the southern and central mountains.

The snowfall potential from later Tuesday through Wednesday continues to look unimpressive as the latest models show just a few inches over the southern and southeastern mountains and a dusting to maybe an inch or two over the northern mountains. 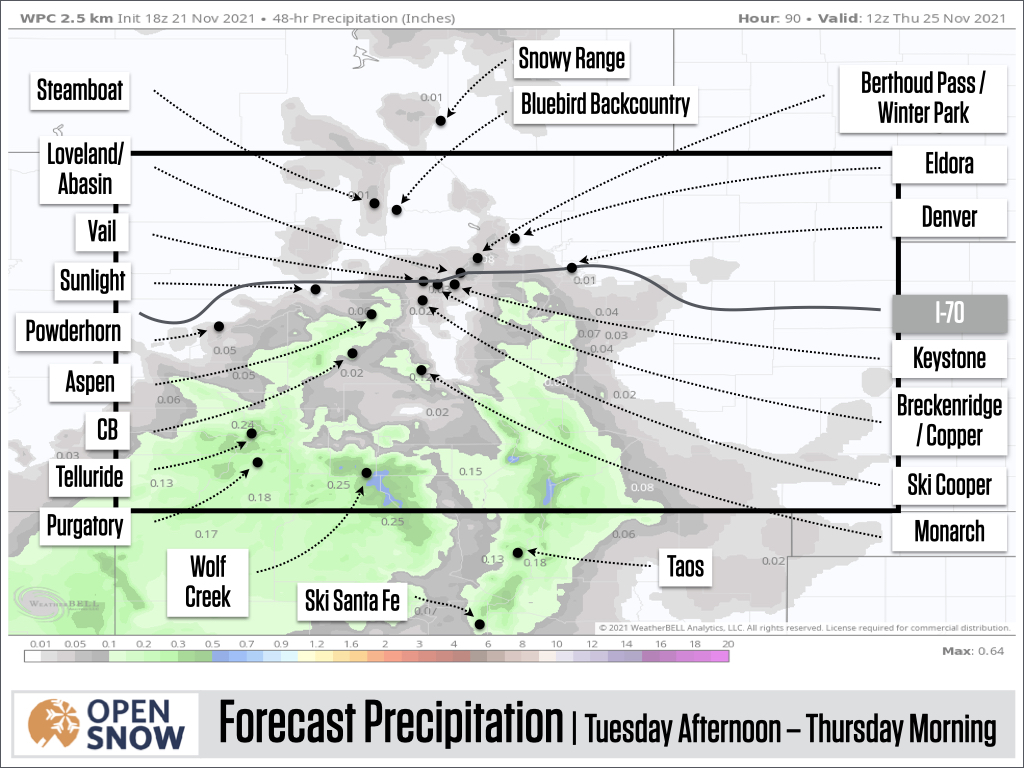 The graphic above shows the multi-model precipitation forecast. Multiply by about 13 to estimate snow.

There are two upsides to the midweek storm. The first is that the forecasts continue to show variability, so maybe we'll wind up with some good fortune and see a little more snow than expected. The second is that temperatures will get chilly on Wednesday into Thursday morning with readings in the teens and solid snowmaking for 24+ hours.

From Thanksgiving Day through the end of November, there's not much good weather news. It'll be dry with moderate temperatures that may offer conditions that are ok for snowmaking at night. There's a chance that a few pieces of energy clip Colorado with a bit of light snow, but as the middle of the graphic shows below, most model versions show no snow. 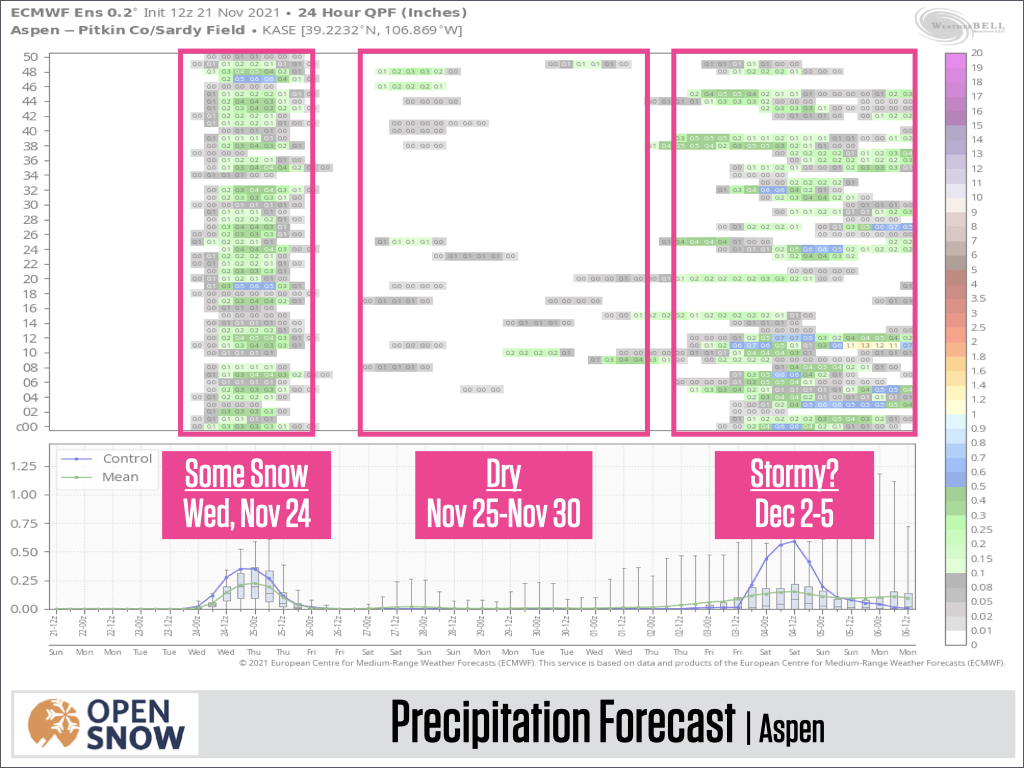 Early December is still 10+ days away, so we have zero confidence about getting a strong storm on a particular day. At least it looks like our chances for a storm will increase, though.