For this week, we'll be in a holding pattern with no snow, sunshine, and relatively warm temperatures. On Sunday, December 5, the northern mountains could see a few flakes, and then around Tuesday, December 7, we might see a stronger storm with meaningful snowfall.

Sunday was yet another clear day with blue skies, light winds, and high temperatures that rose into the 30s.

Monday morning's temperatures are unfortunately starting out about 5°F warmer compared with Sunday morning, which means that conditions are more marginal for snowmaking. Aside from that difference, Monday will look a lot like Sunday with clear skies and high temperatures in the 30s to low 40s.

Tuesday to Saturday will continue our streak of dry and warm weather with high temperatures in the mid-30s to mid-40s, and overnight lows will be cold enough for snowmaking on Tuesday and Wednesday and then a little warmer with more marginal snowmaking conditions later in the week. The Colorado Daily Snow isn't supposed to be focused on snowmaking, but it's all we have at the moment!

Visually, this week's weather pattern is about as simple as it gets – dry high pressure is covering most of the western United States, including Colorado. In about one week, we'll finally see some changes to our stagnant and unexciting weather.

On Sunday, December 5, the northern mountains may be clipped by a storm to the north and there could be a few flakes.

Then around Tuesday, December 7, the most exciting news is the potential (NOT A SURE THING!) for a decent storm to move across Colorado with snow for most or all mountains. The latest American GFS model (below) shows the potential storm on Tuesday. 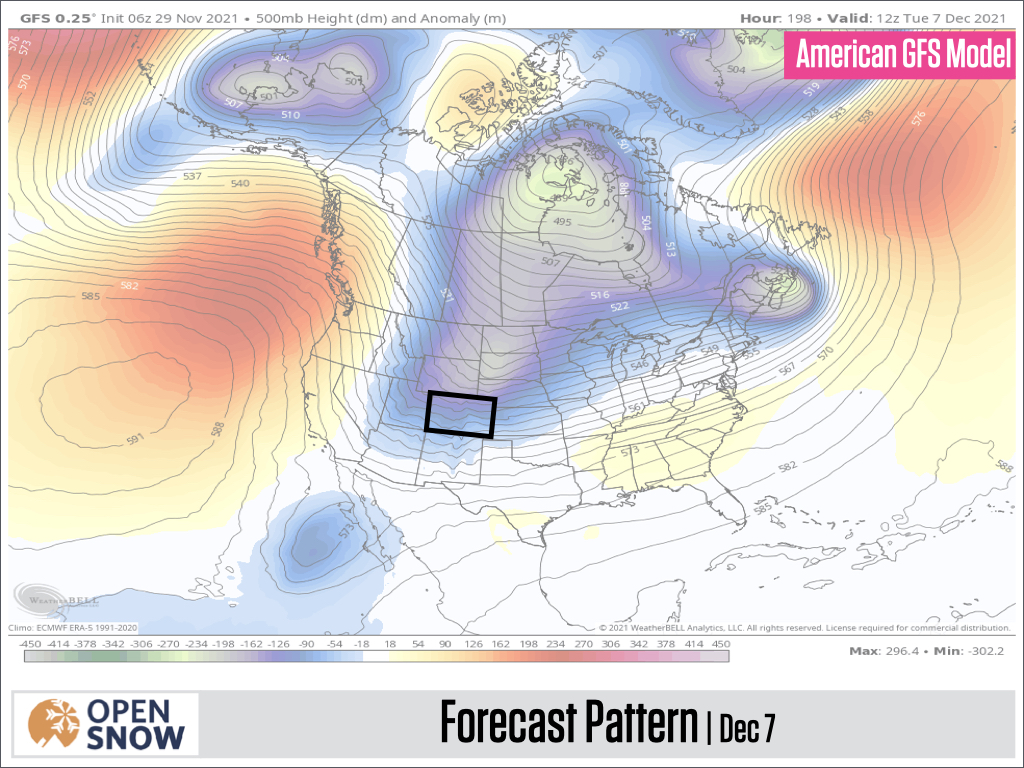 While the above map looks like a sure bet, it's just one version of one model.

Below are 51 versions of the European model, and for the storm around Tuesday, December 7, about 50% of the versions show a meaningful event with the other 50% showing a lesser event. In other words, there's a good chance that we'll see snow, but it's too soon to know if this will be a significant storm. 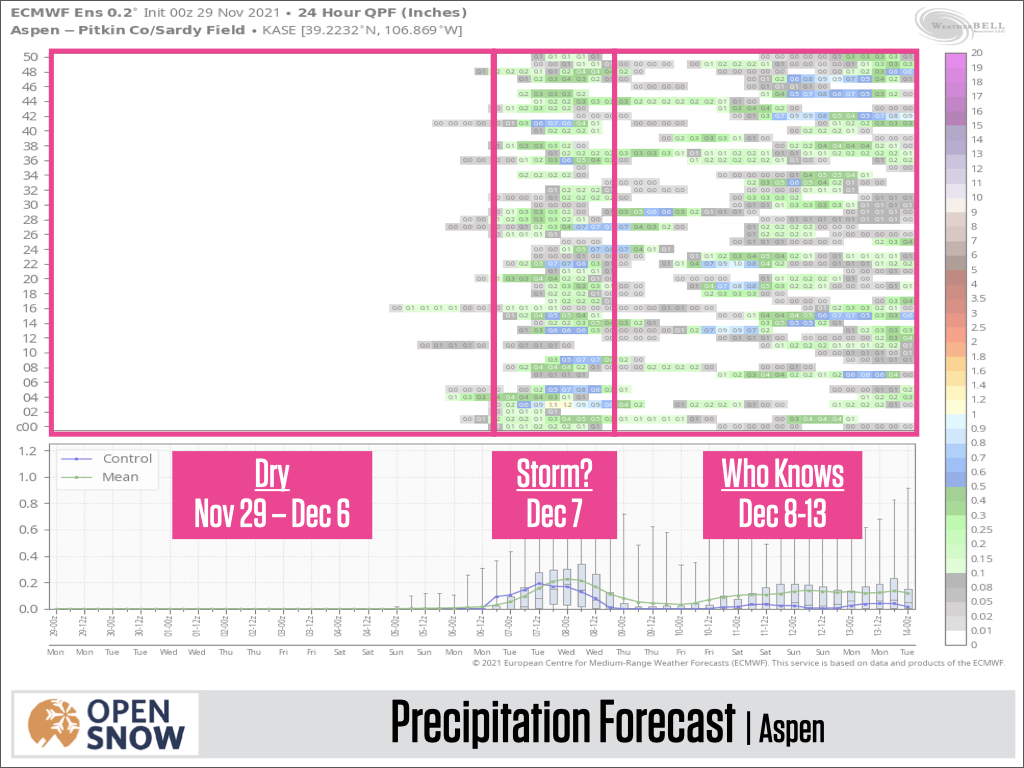 After December 7th, we'll head into the "I'm not sure" part of the forecast.

In the graphic above, you can see a variety of colors from December 8-13, which indicates forecasts that range from dry to more snow.

Below are the longer-range forecasts from December 8-13. That blue stormier area to our north is getting closer to us (compared with the forecast for the first six days of December), and that's a good thing, but it is also not right over us, so I do NOT have high confidence that we'll enter a stormier pattern around mid-December. 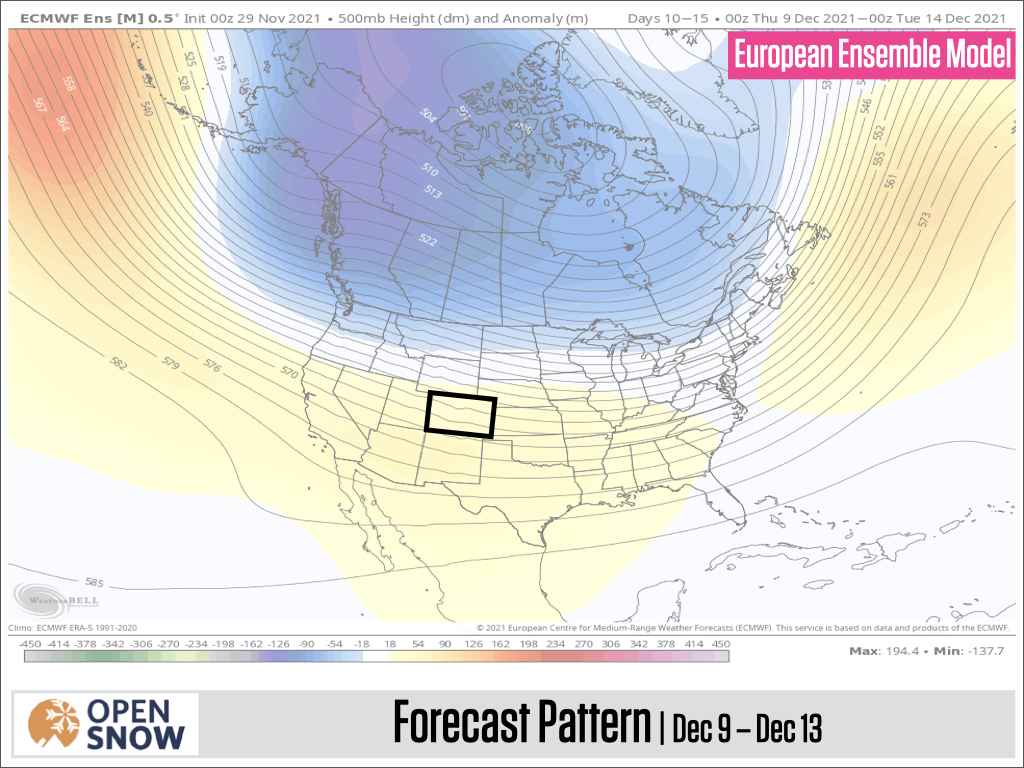 The European model above and the American model below both show storminess over the Northwest during the middle of December, but whether the brunt of these storms move farther south and east to Colorado or just clip us from time to time is something that we can't know at this point. 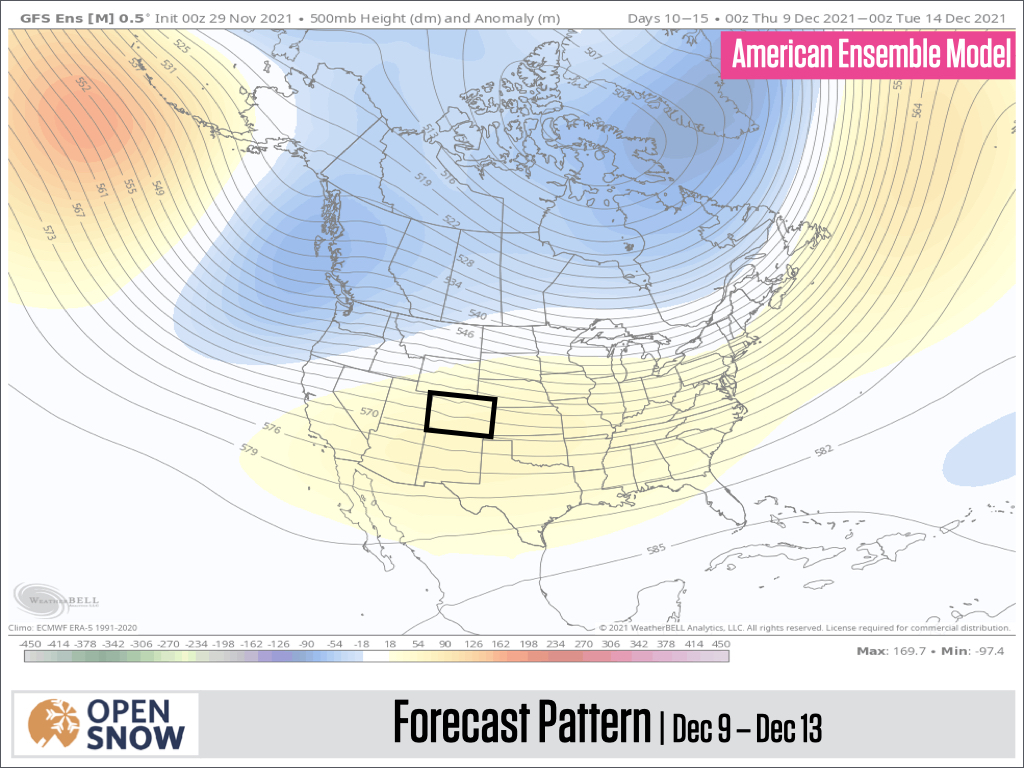 Like I mentioned yesterday, our high-elevation snowpack is below average but could be brought up to average or above with one or two big storms. Our low-elevation snowpack is non-existent, which is why skiable terrain at this point is greatest at the higher-elevation mountains and/or at the upper part of mountains. With the sun angle getting to its lowest point of the year, any snow that does fall in December will stick around on north-facing slopes, so that's in our favor. We just need the atmosphere to deliver the flakes, and the next shot of that is around December 7th. Fingers crossed!