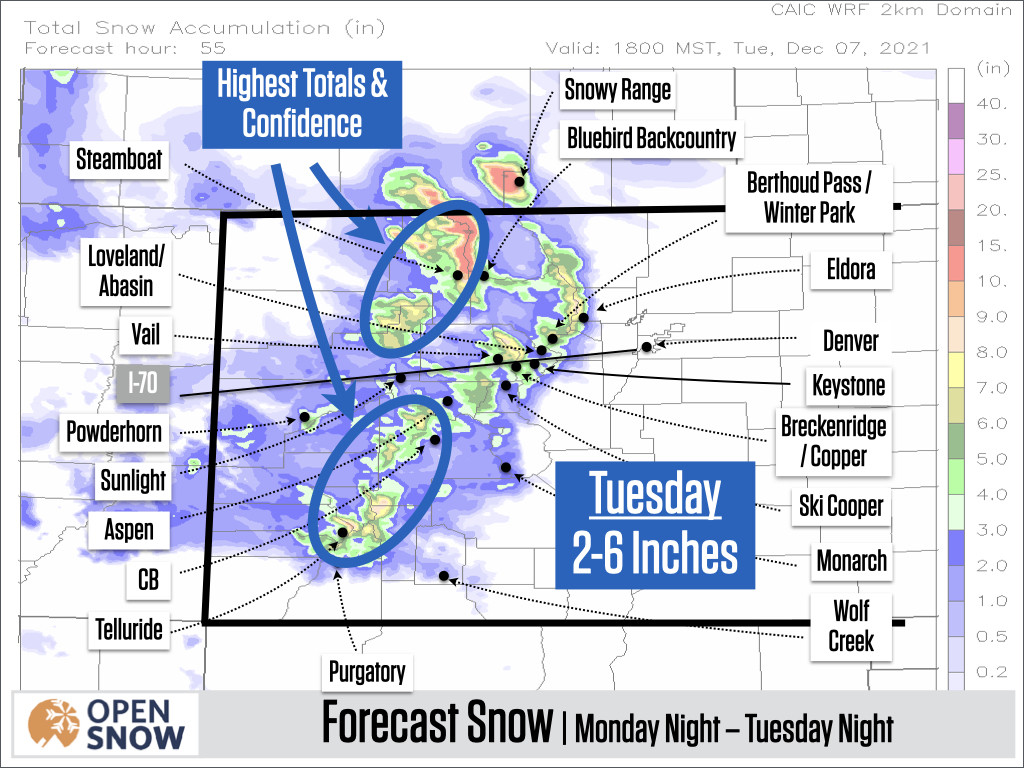 Sunday was dry, mostly sunny, and a little cooler than previous days with highs in the 30s.

Most of the day will be mostly dry with high temperatures in the upper 20s to low 30s. Snow from the next storm may arrive during the afternoon, so the final few hours of the day could deliver some flakes.

Finally, we have snow to talk about!

As of Monday morning, this storm has made landfall over the Pacific Northwest and radar shows that snow is heading our way.

Expect snow to begin late Monday afternoon and Monday evening. There will be steadier snow on Monday night and Tuesday morning, and then snow will taper off to snow showers on Tuesday midday and Tuesday afternoon.

The latest models continue to point to low-end to moderate snow accumulations with an average of 2-6 inches across Colorado and deeper totals of 6-8"+ around Steamboat, the Elk Mountains near and west of Aspen and Crested Butte, and the northwestern San Juan Mountains around Telluride and Silverton. These higher totals could fall in areas favored by winds from the west-southwest, west, and west-northwest, which will be the dominant wind directions during this storm. 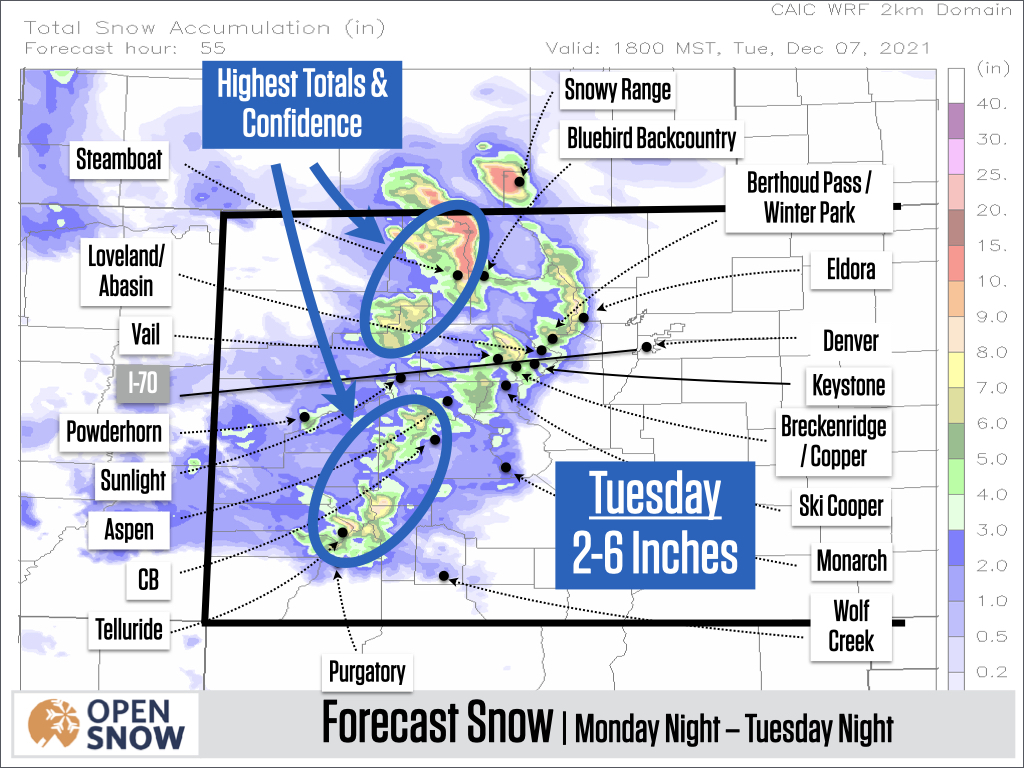 The best time to enjoy some softer turns should be on Tuesday during the first half of the day.

There will be a mid-week lull followed by a strong storm later this week.

Most likely, we'll see dry weather. There could be a few showers here and there, but I think accumulations will be little to nothing.

This storm continues to have a lot going for it, with a lot of moisture, a cold front moving through the state which will serve as a focusing mechanism for intense snow, and the jet stream will be overhead for some period of time, which should help to lift the air and create a band of intense snow.

All of that said, the latest models are now mostly showing this as a storm that will produce solid moderate-to-higher-end snow totals and not a blockbuster storm for all mountains. A good-to-great storm is still fine, but I was really hoping for a big, big, big, storm to get our snowpack back into shape.

The latest multi-model precipitation forecast continues to show that the deepest totals will be farther to the west with 1+ inch of precipitation possible (orange areas), which converts to 10-20"+ of snow. Other areas in blue would be closer to 6-12 inches of snow. 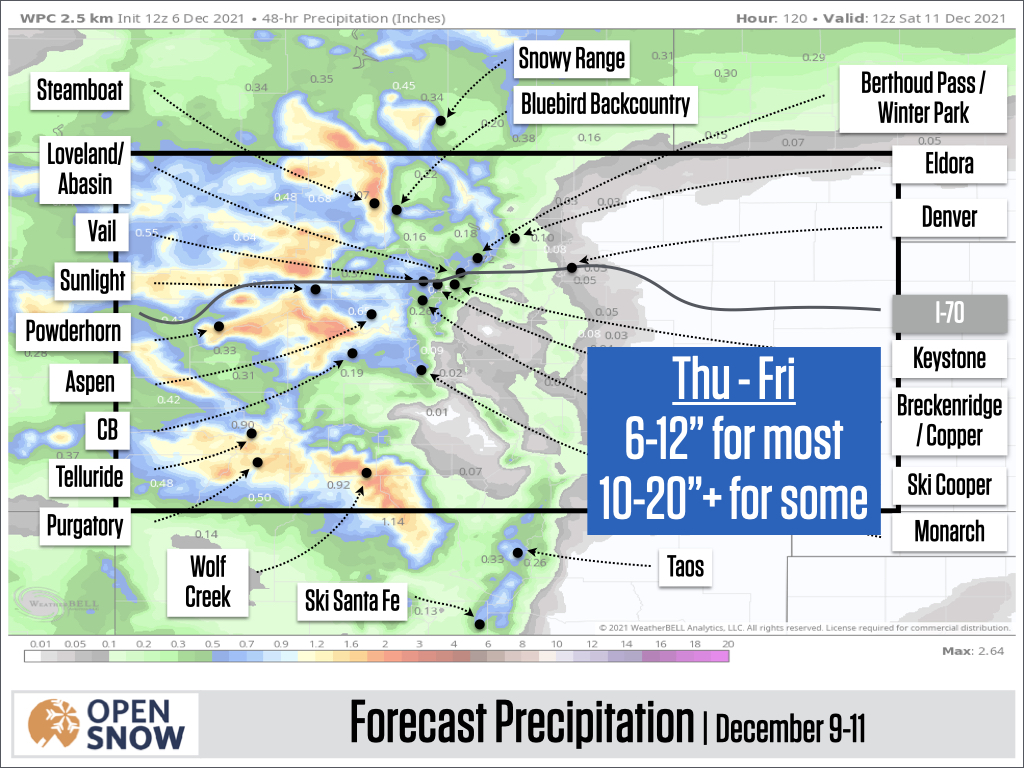 The most intense snow will likely fall on Thursday night through Friday midday or early afternoon, so keep this in mind for planning a time to ride and/or drive (the snowfall rates will be intense for a time, so some roads could close).

I like to keep our expectations in check, so I think the numbers that I mentioned above are very reasonable. But, with a few good factors involved (moisture, cold front, jet stream), there could be some upside surprises from this storm.

The weekend and week from December 11-18 will be mostly dry. Most of the storminess will be along the west coast and over the Pacific Northwest. We might see a storm push east into the Rockies and Colorado, but my expectations for snowfall are low.

The following week, December 20-24, will likely have a better chance for snow when that storminess over the west coast finally moves east toward Colorado. This is the busy holiday travel time, and this stormier period is what we would need to open a lot more terrain.