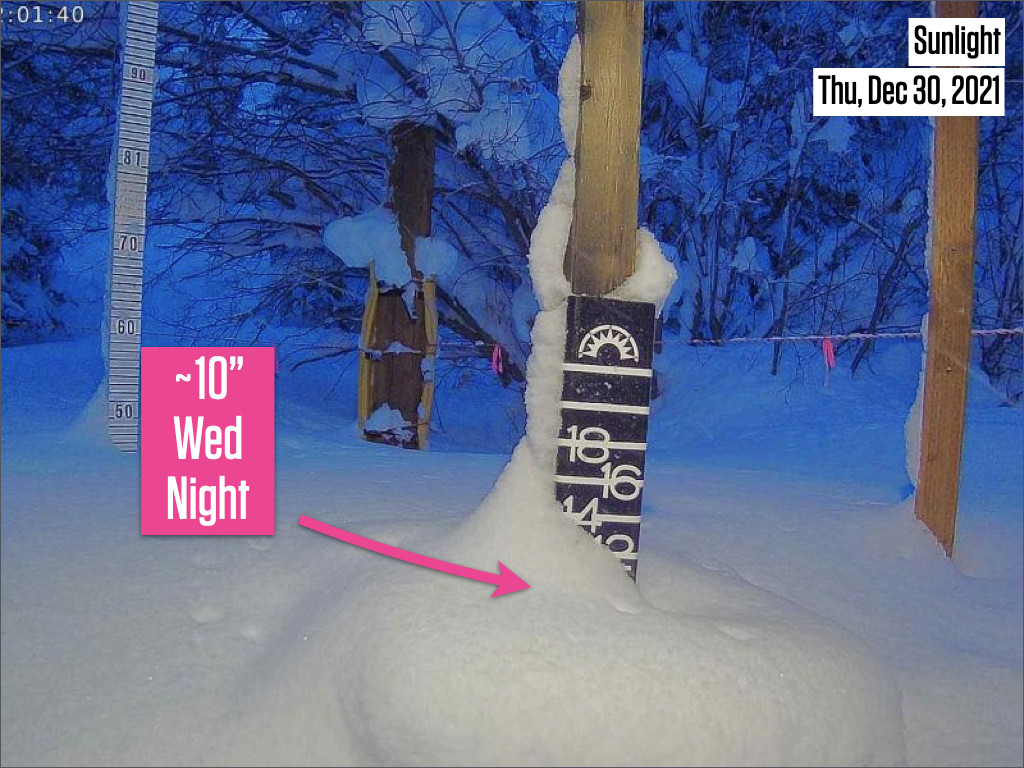 On Thursday morning, there is fresh snow from Wednesday and Wednesday night. Thursday should bring some more snow but I have low confidence in amounts. The main event will be intense snow from Thursday night through Saturday morning with a foot or more for most mountains and two feet or more for some favored areas. We'll then clear out over the weekend with snow returning later next week.

We're in the final stretch of an AMAZING storm cycle. Let's get to it!

Many mountains saw snow in the morning which tapered off during the afternoon. In general, amounts were 2-6 inches but more at some spots with 7-8 inches at Winter Park. Those 7-8 inches of fluffy snow at Winter Park were a massive surprise as no models indicated anything close to this and the wind direction wasn't favorable. The atmosphere (and all of us that like powder) won this round and meteorological science did not win!

Overnight, snow ramped back up for some mountains with 6 inches at Crested Butte and Purgatory, 3-4 inches at Monarch and Aspen, and a little bit of fluff elsewhere in the central and southern mountains. The big winner was Sunlight with 10 inches of fluffy snow on Wednesday night which we can see on their snowstake cam. 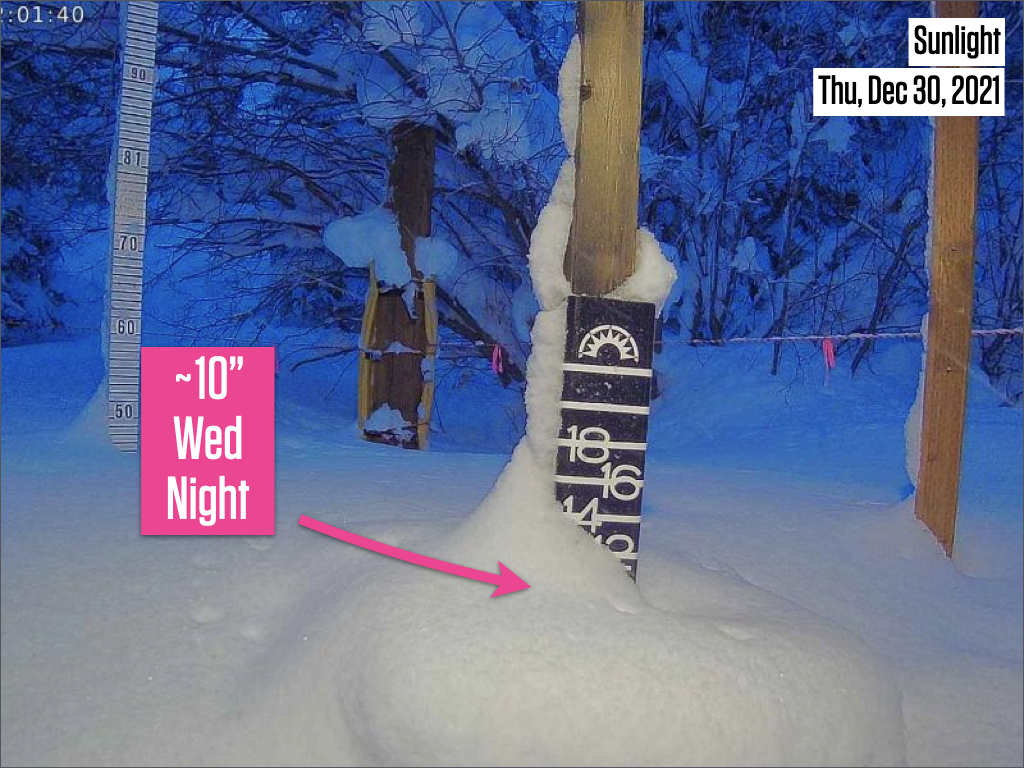 Wednesday night featured continued moisture, good temperatures, and a wind from the west-southwest and west, which favors the mountains I just listed that saw the most snow on Wednesday night.

I have low confidence in this forecast. Most mountains will still be in the crosshairs of moisture and storm energy flowing in from the west and west-southwest, so snowflakes should continue to fall from the sky. Temperatures will warm slightly, which could limit snowfall for some areas. Overall, I'd say another few inches is likely for most mountains with 5-10 inches possible for areas of the central and southern mountains favored by flow from the west-southwest.

All mountains will see significant snow during this time and I think the best powder will be Friday with snow getting deeper throughout the day and also on Saturday morning when first chair should be deep and fluffy.

During this 36 hour period of generally moderate to intense snow, a period of more intense snow (along a cold front) should hit Steamboat early on Friday morning, then the band of intense snow should shift south toward I-70 by Friday midday or afternoon, and then it'll continue south across the central and southern mountains later Friday into Friday evening.

Total accumulations should be 10-18 inches for most mountains with 18-36 inches for spots favored by a flow from the west-southwest (some of the Aspen mountains, Crested Butte, Silverton, Wolf Creek).

Below is the CAIC 2km WRF snow forecast for Thursday through Saturday morning. The numbers are bonkers (good!) yet also look reasonable and are in line with other models. 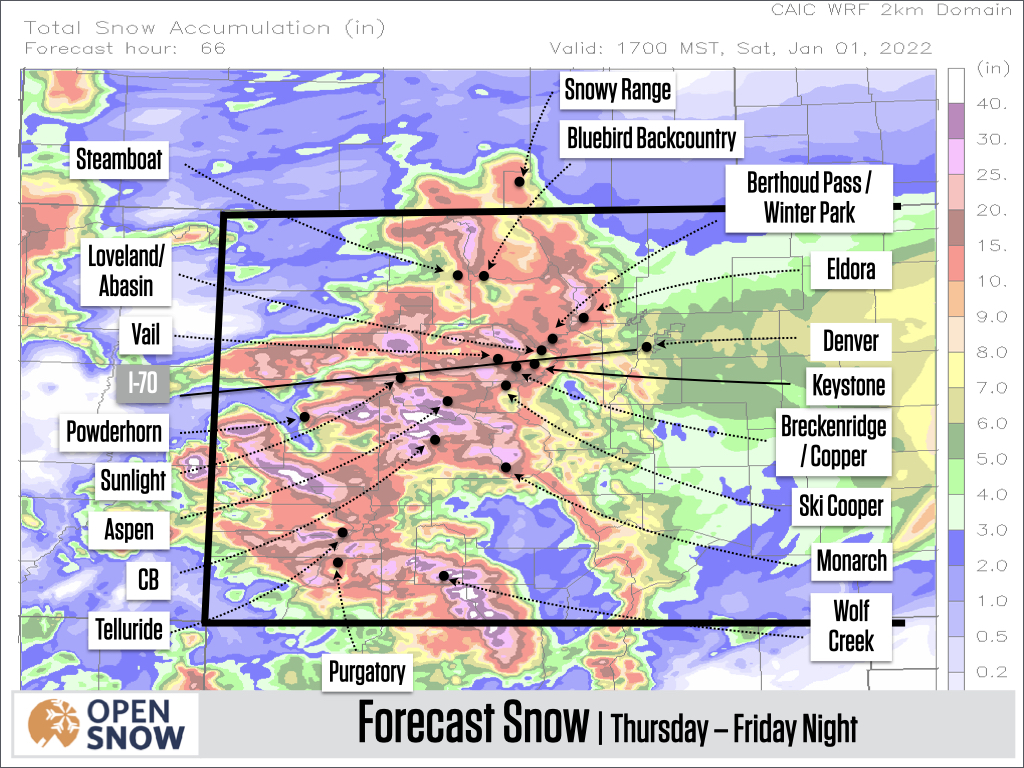 In summary, Thursday will bring some snow though I have low confidence, Friday should be a fun powder day with snow getting deeper throughout the day, and Saturday morning's first chair should be delicious yet very cold.

Saturday, Sunday, Monday, and Tuesday will be dry. Saturday will be cold with temperatures near 0°F and then each day will warm a little more with comfortable temperatures and sunshine returning.

Starting around Wednesday, January 5th, and continuing for a few days, we MIGHT see snow return to the northern half of the state. I have high confidence that points to our north in Wyoming will see snow, but I'm not sure if the majority of this snow will stay to our north or if it will make it into northern Colorado. The average of most models shows that we will see snow for multiple days, but I don't want to get too excited just yet as we're still 6-7 days away from this potential storm cycle and the forecast will change in one way or another.