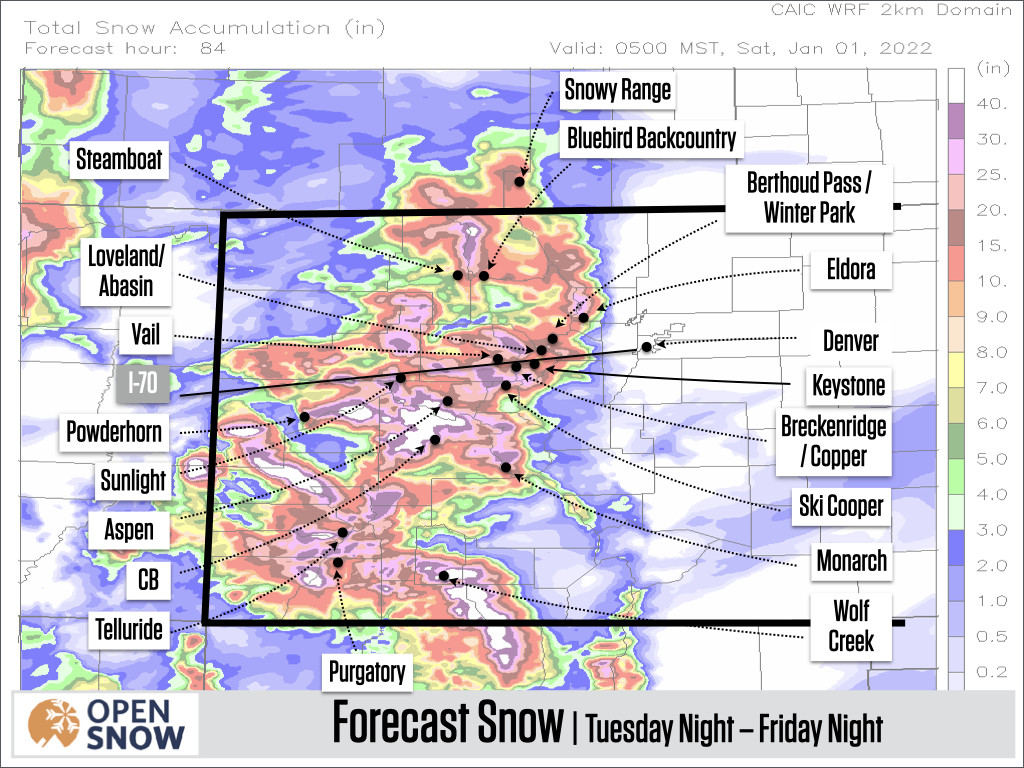 Tuesday was a fluffy and fun powder day for many areas. Wednesday should also be soft and fun thanks to snow that continued to fall throughout Tuesday and Tuesday night. On Wednesday afternoon, we might see a break in the action. Then the final round of snow will start on Wednesday night or Thursday and continue through Saturday. Total accumulations should be 10-40 inches:-)

We are in the midst of a 7-10 day storm cycle that many of us will remember for a long time. Let's get right to it!

It was a fluffy and fun day for most areas.

There was fresh snow (3-20 inches) at first chair and more fluff fell throughout the day.

The deeper totals were near and south of I-70 and near and west of Vail Pass (generally in the southwestern quadrant of the state).

The deepest and surprising total was at a southern mountain whose name ends in "Creek". That mountain received about two feet of blower powder and I didn't realize this when I posted very early Tuesday morning because the official resort report was not yet updated. Also, I did check SNOTEL data but thought totals were not this high as I didn't realize that the snow-to-liquid ratio was so fluffy.

A first-hand report from a reliable source (picture below) said it was an unforgettable powder day. The combination of a favorable wind direction from the southwest and west-southwest AND perfect temperatures of about 14°F at the mountain top were the ingredients that made this possible. 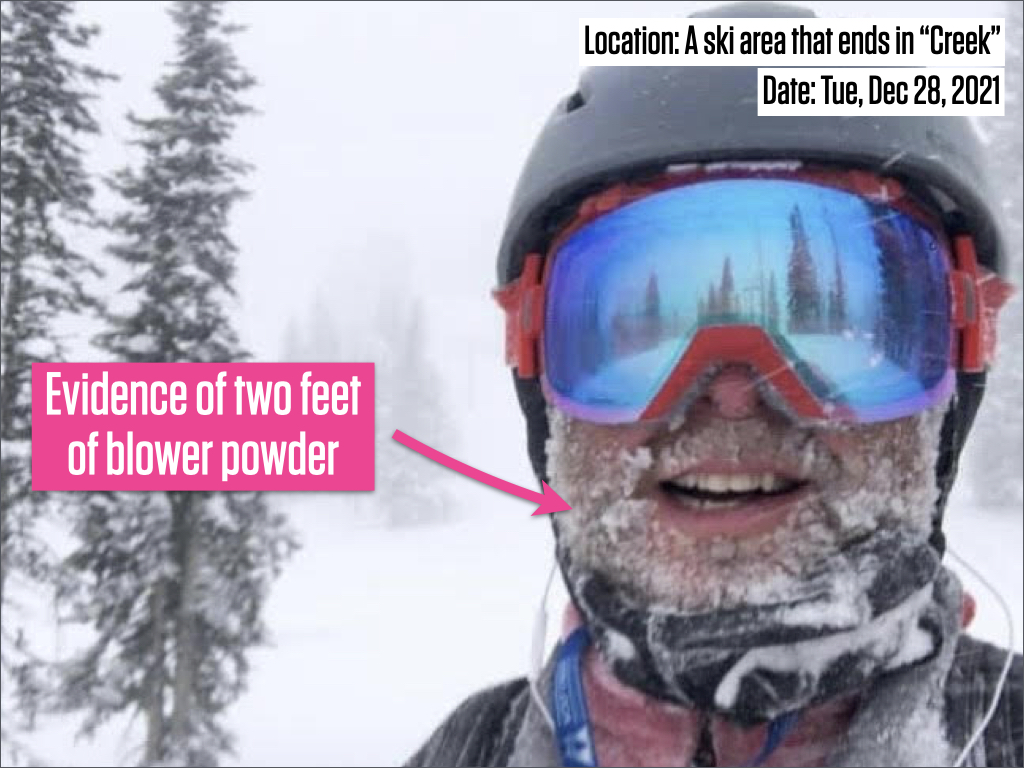 Snow continued for the southwestern quadrant with an average of 2-4 inches of fluff overnight. Based on cams, the southern mountain that ends in "Creek" could have massively higher totals of 1-2 feet of snow. We'll see in a few hours when the official report comes out around 630-700am. In general, the snow on Tuesday night was very fluffy, so conditions on Wednesday morning will range from "soft" at areas that didn't see much overnight snow (mountains farther to the northeast) to soft and fluffy blower at other areas.

I have low confidence in the forecast. In the morning, snow should continue for the southwestern quadrant of the state with a few inches of accumulation. In the afternoon, snowfall should wane as storm energy drifts off to the east and we're left in a short-lived lull.

I also have low confidence in this part of the forecast. On Wednesday night and Thursday morning, snow could ramp up. A wind from the southwest and west-southwest should favor the central and southern mountains with maybe 2-6+ inches of snow on average with 10-15 inches for some spots.

All models now agree that this will be a time for significant snow. Expect snow to ramp up on Thursday night, intense snow to fall on Friday, and maybe, if we're lucky, snow will keep going through Friday midnight or into early Saturday morning before letting up on Saturday. Friday should be a phenomenal powder day for most areas with freshies for first chair and free refills throughout the day. Saturday morning could also be very good if we get snow on Friday night and/or if new terrain opens. Saturday morning will be cold with temperatures near or colder than 0°F.

The forecast is, to use a technical term, bonkers. All models agree that all mountains will receive at least 10 inches from Wednesday through Saturday morning with most mountains hitting 12-24 inches and some spots like Crested Butte, Silverton, and Wolf Creek likely hitting the 24-48 inch range. 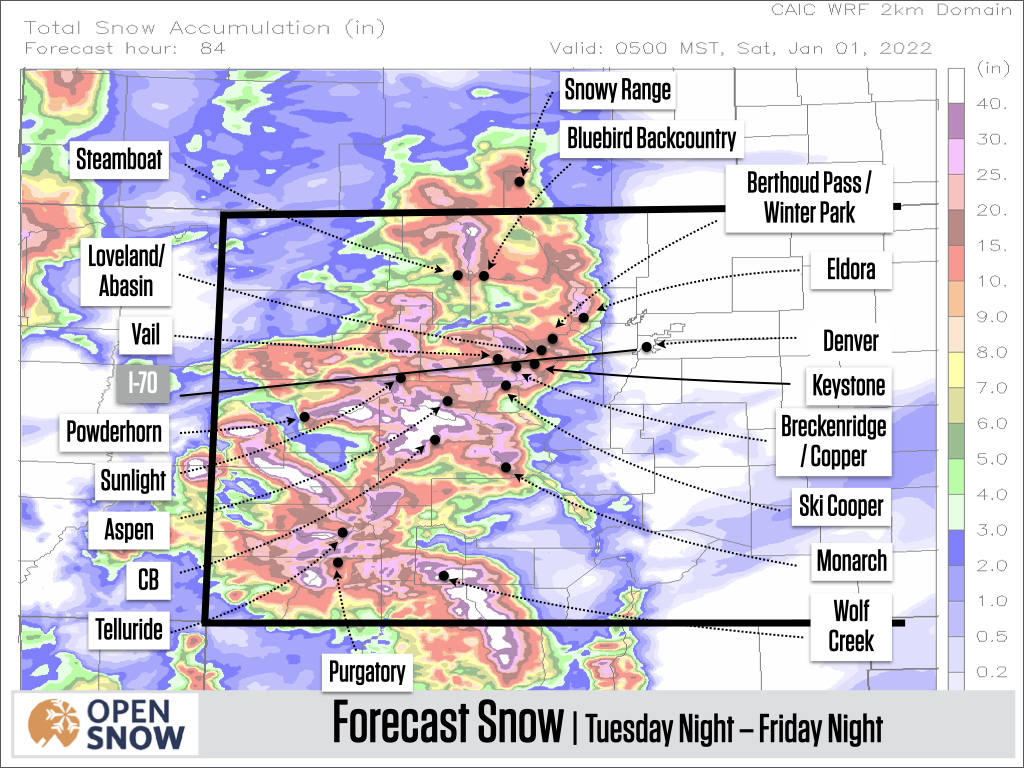 I posted one model image above, and our forecast data (which you see on our website and app) generally agree with this image. It is important that our data show these high totals because it's based on the average of multiple models and multiple runs. When I see big totals in the forecast data, I have pretty high confidence in the numbers since it means that most runs of most models agree that the forecast will be 'bonkers'.

Wednesday will offer some fluff, Thursday afternoon could be sneaky good, Friday should be deep and getting deeper all day everywhere, and Saturday morning might offer super fluffy for some spots that keep getting snow on Friday night.

To get significant snow on Friday night, we have to find the areas where the coldest air will wait to arrive until Saturday morning. This is because when the air turns frigid, the amount of moisture plummets, which reduces the potential for deep snow. The areas that I think could offer great powder on Saturday morning (where the coldest air will stay away on Friday night) are Vail, Beaver Creek, Aspen, Crested Butte, Telluride, Silverton, and Wolf Creek.

We'll see a break, and then more snow.

Sunshine will return on Sunday and Monday with a few more clouds on Tuesday, and temperatures will be comfortable in the 20s and low 30s.

There is now a general consensus amongst the multiple versions of the ensemble models (European, American GEFS, and Canadian) that snow will return to the Rockies around Wednesday, January 5th, and could continue through the weekend (January 8-9).

During our current storm cycle, the wind direction is generally from the southwest and west-southwest, which brings the most snow to the central and southern mountains.

During the next storm cycle between January 5-9, the wind direction could be more from the west and northwest, and this would favor the northern and central mountains. 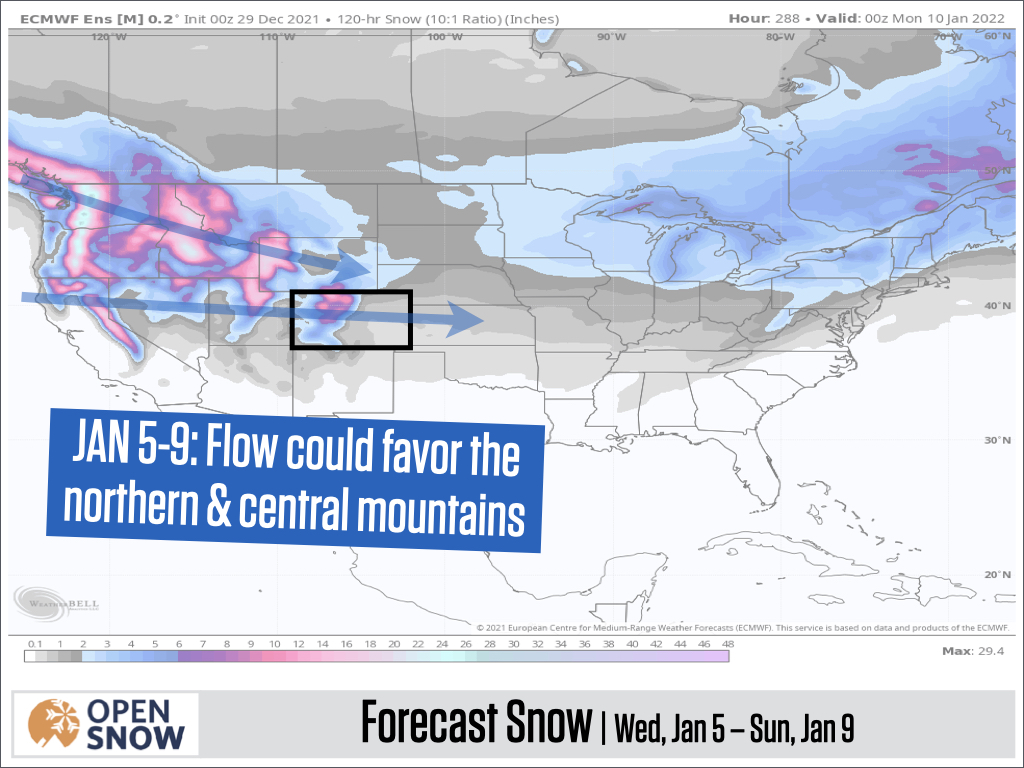 The wildcard for the January 5-9 period is if the trajectory of storm energy and cold air makes a direct hit on northern Colorado or if it tracks just a bit too far north. If we get the energy moving directly overhead, the northern half of Colorado could get a lot of snow. If the energy stays just a bit too far to our north, then snow totals will be unimpressive and limited to fewer northern mountains. We'll dial this in during the next few days.