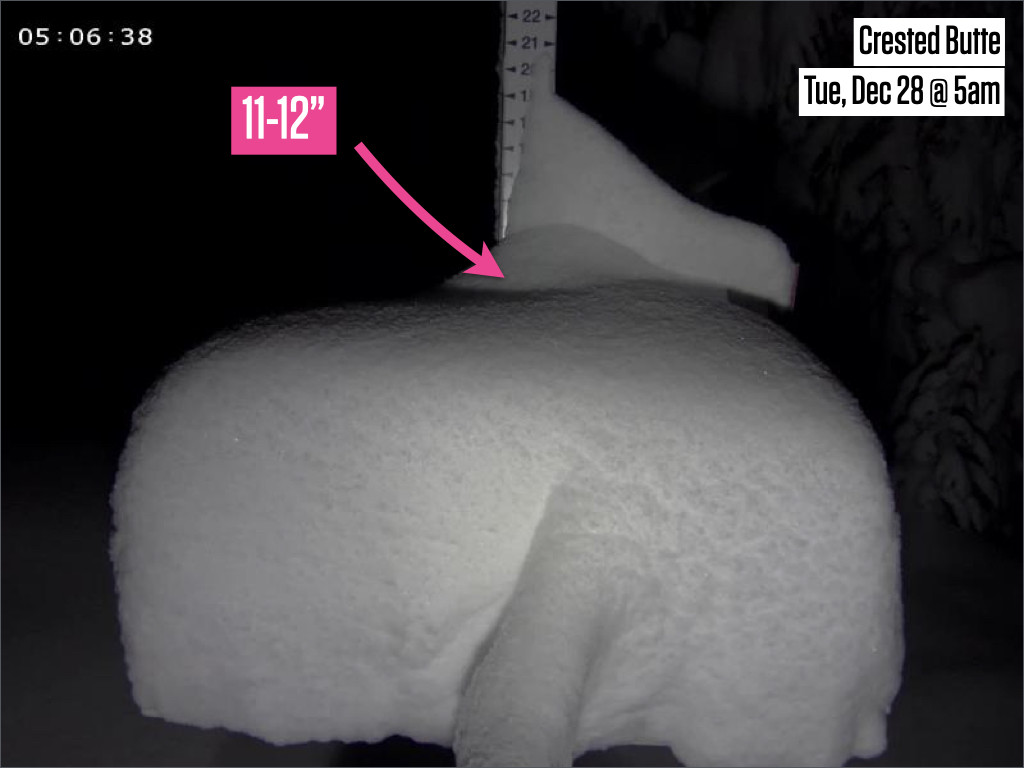 As of Monday, December 27th, our statewide snowpack is now above the median. That was quite a catch up the atmosphere performed during the last week, and there's more snow on the way!

On Monday we saw light snow, then the main event happened on Monday night with 3-9 inches accumulating at most mountains and 10-15 inches on the snow stakes in the central and southern mountains.

Once again, Crested Butte delivered with a favorable wind direction from the west-southwest. 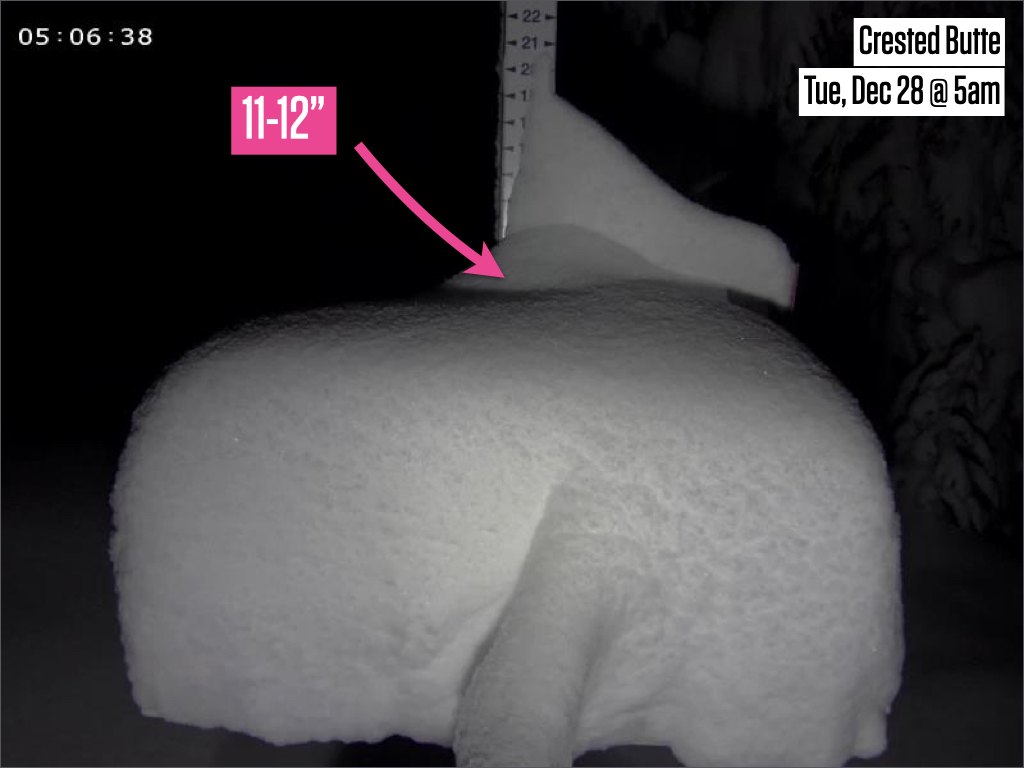 Tuesday morning will be a nice time to enjoy powder at most mountains as the snow quality should be decently fluffy. Temperatures are right in the range for fluffy snow (single digits and teens) though exposed areas did see strong wind gusts of 50+mph with this storm, and strong winds are not what we want for fluffy snow.

From Tuesday mid-morning through Tuesday night, there will be more snow, generally near and south of I-70 and through the central and southern mountains. I have low confidence in the forecast for this time period. Most models show just a couple of inches, but the atmosphere could produce more. This means that snow should stay soft all day Tuesday and into Wednesday morning. Snow totals could be a few inches and up to 10 additional inches.

I think we'll see somewhat of a break in the steady snow. There could still be snowflakes falling from the sky on Wednesday, especially near and south US50 (roughly Crested Butte and Monarch and points south). Snow totals could be a few inches.

This will be the final round of significant snow during our current stormy period. It looks like snow will ramp up on Thursday, continue through Friday, and end by Saturday midday or afternoon. The best powder could be on Friday with great skiing and riding all day, and again on Saturday morning. Total snowfall should be 10-30 inches during this time, and once again, the higher totals will be in the central and southern mountains.

The forecast above feels somewhat vague as I'm writing this, but I actually think of that as good news because the snow will be somewhat continuous throughout the week with great conditions and multiple chances for fun powder. Don't think too much about your powder strategy – get out and ride as much as possible and hope to catch some terrain openings, too!

Our current stormy period will end on Saturday afternoon.

From Sunday, January 2 through Tuesday, January 4, we will see dry weather, the sun will return, and temperatures will be warmer with highs in the 20s. 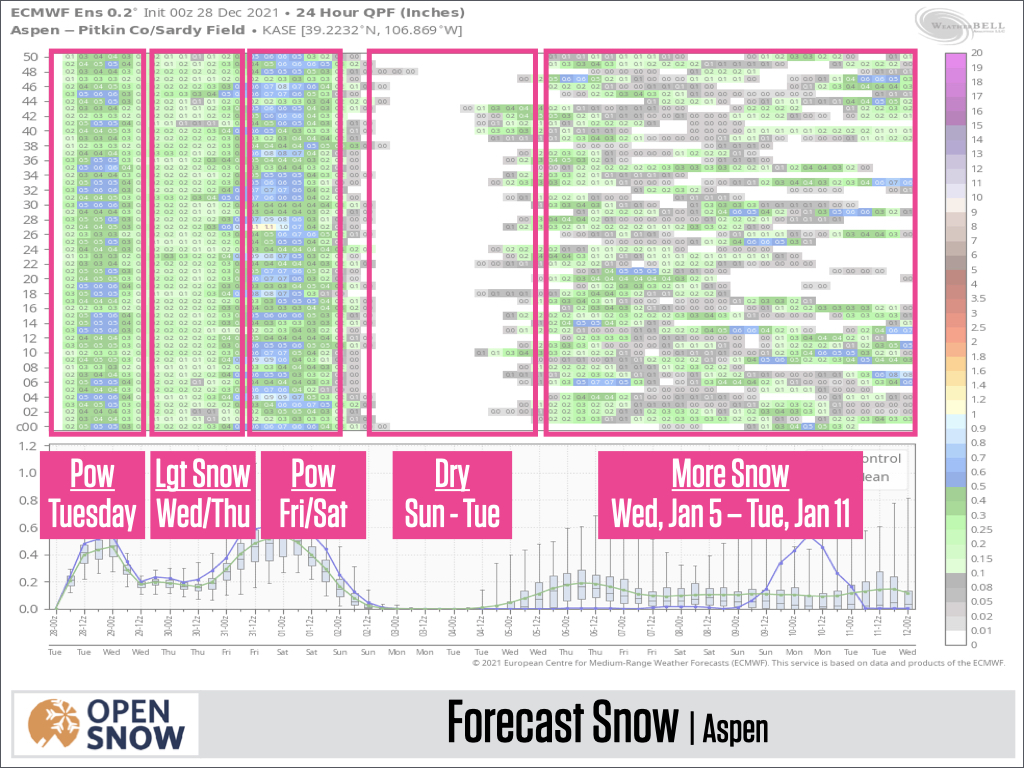 January 5-11 is a wide range of dates for snow to return, and the wide range is mostly because the longer-range models aren't quite sure how and when storminess over the west coast will evolve and move east over the Rockies.

Maybe the storminess will take its time, continue to bring snow to the west coast, and not reach us until closer to the first weekend of January. Or maybe a piece of that west-coast storminess will quickly push east and create a west-to-east flow of multiple storms starting closer to January 5th or 6th. There's no way to know at this time which of these options will happen or if another option will happen, but I am confident that we'll see more storminess in early January.