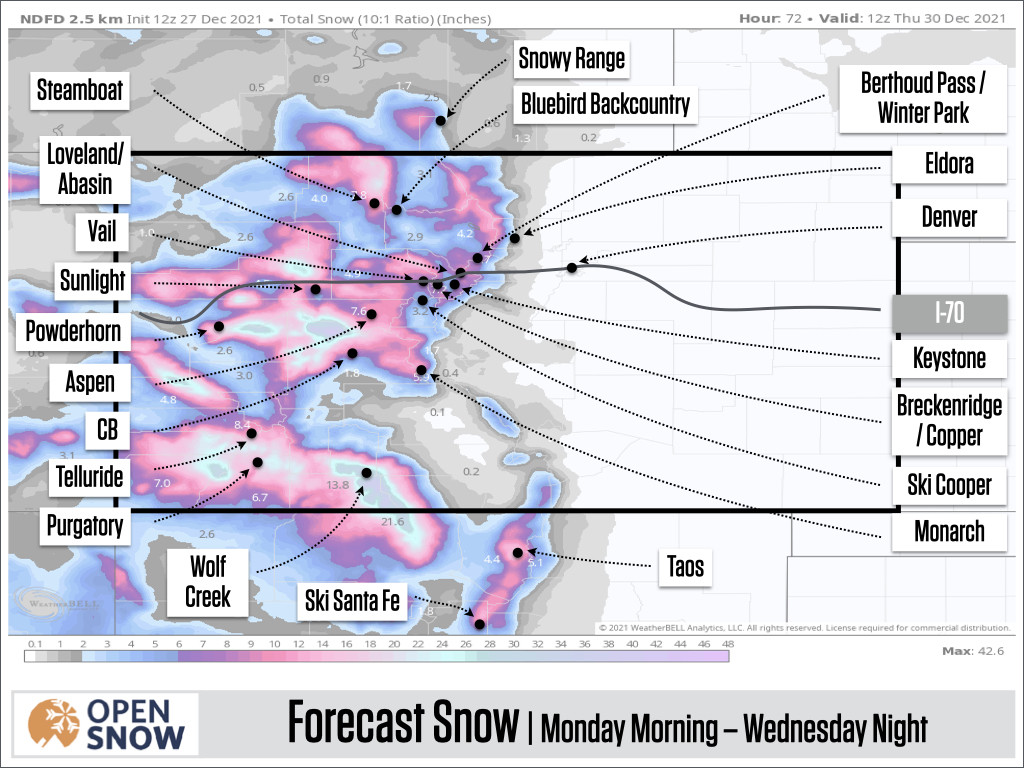 Sunday's storm delivered 4-10+ inches, and now on Monday, we'll look ahead to snow falling every day this week. The most intense snow should be on Monday afternoon to Tuesday morning and again later Friday into Saturday morning. Total accumulations this week should be in the range of 15-45+ inches. Winter is finally here:-)

Before getting to the forecast snowfall, let's take a quick look at our current snowpack.

As of Sunday morning, December 26, we now have a state-wide snowpack that is 95% of the median. That's quite an improvement from our situation in early December when we were in danger of setting a low-snowpack record. This season's snowpack is the black line in the graphic below. I expect that we'll be higher than the median by the end of this week, if not sooner. 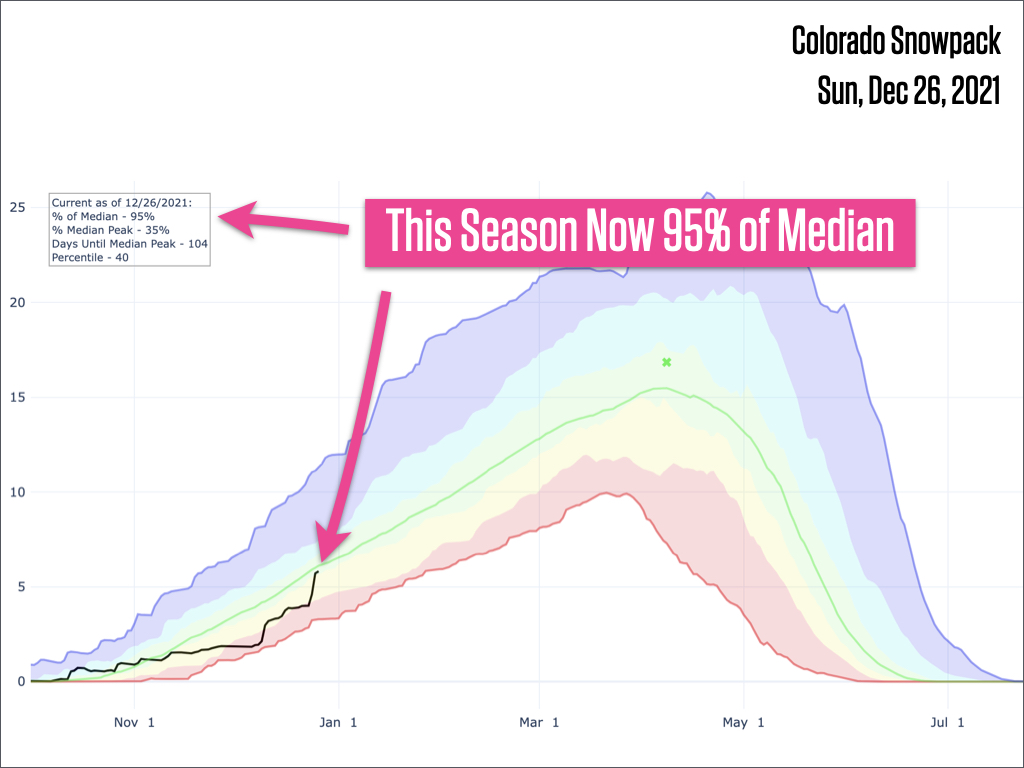 The 24-hour snow reports from Sunday morning to Monday morning are generally in the 4-10 inch range. Some mountains saw most of this during the day on Sunday, and others saw a pop in the snowfall on Sunday night meaning that there will be freshies now on Monday morning. Winds were fast during the day on Sunday with some ridge-top weather stations reporting 70+mph gusts. Storms like this one, with moderate snow totals, don't always make the headlines or produce the best conditions for all areas, but they are important as they continue to help us to deepen the snowpack and they keep conditions soft.

Monday morning and midday will bring less intense but still some snowfall. There will be fun powder in the morning from Sunday's leftovers and/or the snow that fell on Sunday night.

The next round of snow will push through and all mountains will see the most intense snow from Monday late afternoon or Monday night and into Tuesday morning. Like the storm on Sunday, I am thinking that 5-10+ inches of snow is a reasonable forecast, though some areas in the central and southern mountains will see 10+ inches. The powder quality could be quite good on Tuesday morning into midday thanks to cold temperatures in the single digits and winds that will not be as strong as previous storms.

The snow will continue, mostly for the central and southern mountains. I have low confidence around accumulations, but at least 3-6 inches of additional snow is likely and maybe double this. There will be moisture and stormy energy lingering around the state, and with southwest and west-southwest flow, the central and southern mountains will continue to see flakes. Wednesday could be another powder day thanks to new snowfall, leftovers, and terrain openings.

Snowfall during the 48-60 hours from Monday morning through Wednesday night will be significant with 8-30 inches across the state, favoring the central and southern mountains.

The multi-model forecast blend shows this snow, favoring the central and southern mountains. 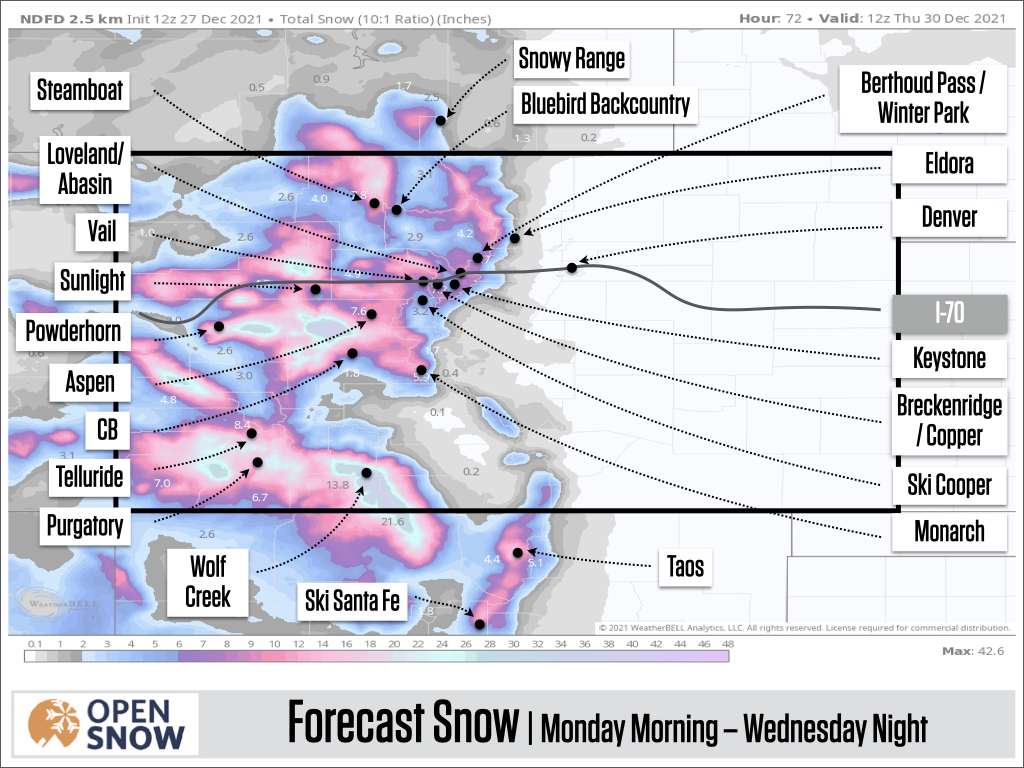 And the CAIC WRF 2km shows this snow as well, favoring the central and southern mountains. 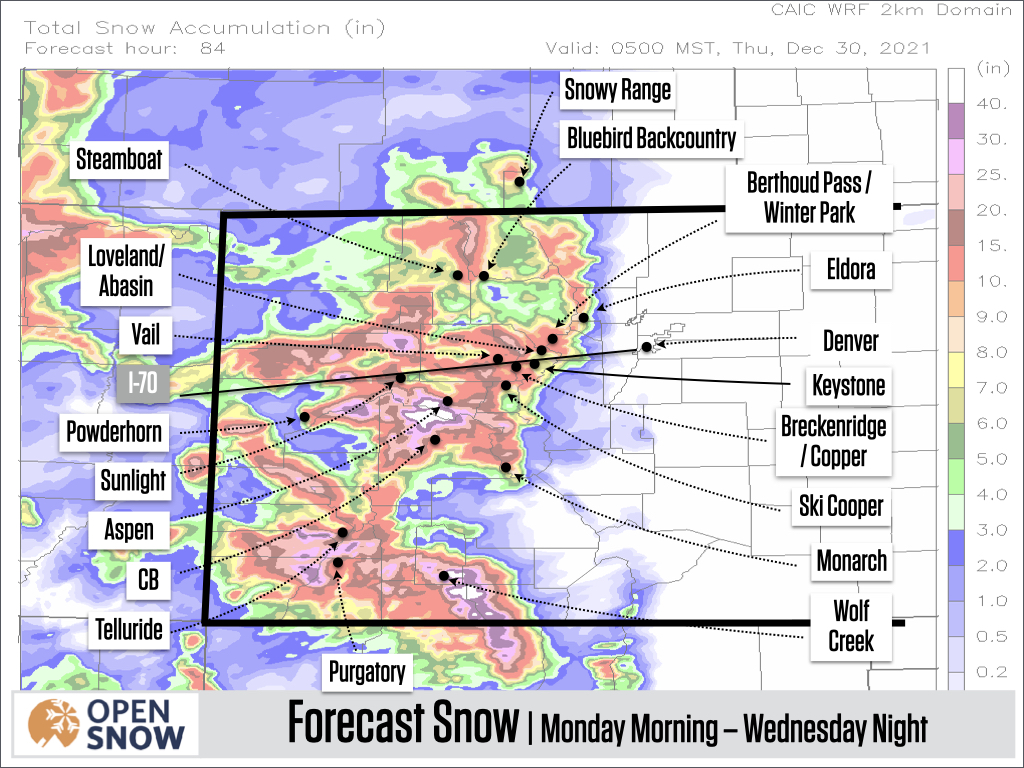 On Thursday into early Friday, I continue to think that some or most mountains will see a break in the snow, but the southern mountains could continue to see snow during these days thanks to plenty of moisture and a continuous flow from the southwest.

This will be the final storm of our week of storms. I expect intense snow for all mountains starting sometime Friday midday, afternoon, or evening, and continuing into Saturday morning or midday. The best powder will likely be on Saturday morning. With a soft base from a week of snowfall and cold temperatures, the powder and ski/ride quality from this storm could be excellent later on Friday and most likely on Saturday morning.

We should see a break in the weather with dry conditions starting on Sunday, January 2, and likely continuing through Tuesday, January 4.

Then snow should return during the second half of the week, between about Wednesday, January 5, and Friday, January 7. I do not yet have confidence whether this snow will come from persistent northwest flow (European model) or another set of storms moving in from the west and southwest (American GFS model).