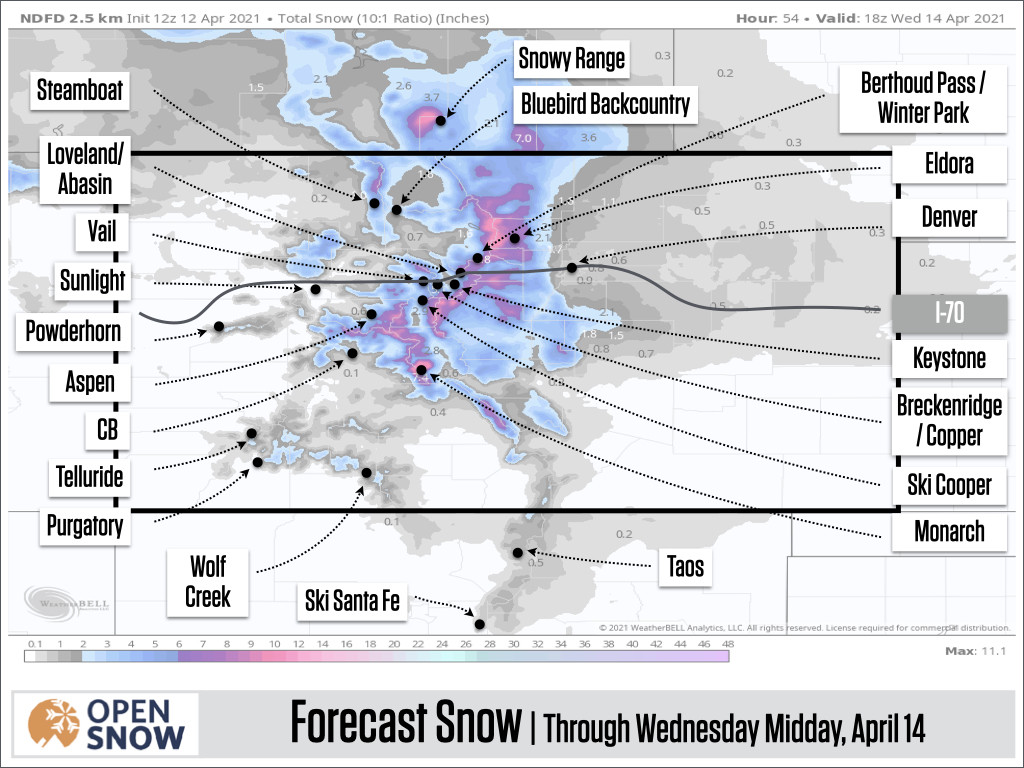 Monday will be dry and partly sunny. Then we'll see snow showers begin on Tuesday and there will be waves of snow throughout the rest of the week. The best chances for 3-6+ inches of powder should be on Wednesday morning and again on Friday morning. For the other days, Thursday and the weekend, there could also be powder, though my confidence is lower.

Sunday was a sunny day with high temperatures from the upper-30s to the mid-40s.

The wind kicked up at times, and that, combined with already dry south-facing slopes, allowed a wildfire to burn in Summit County. The fire started near an outdoor shooting range, though there is no official cause listed. It seems like the fire is mostly under control, did not burn much acreage, and should be able to be extinguished thanks to the incoming cooler and wetter weather.

It's only April, and it seems early for wildfire season, but the ground is dry in many spots and all it takes is one spark and a bit of wind and the result is not good.

Monday will be the last mostly dry day for a while. Expect mostly-to-partly sunny skies and high temperatures in the upper 30s to mid-40s. We could see some showers later in the afternoon and at night especially over the northeastern mountains.

For the rest of the week, we will see multiple rounds of snow. Temperatures will be coldest and snow levels will be the lowest over and east of the divide, and elsewhere, snow levels could be near or above 10,000.

The first round of snow should be on Tuesday afternoon, Tuesday night, and through Wednesday morning. Most models show 3-6+ inches possible, focused on the northern mountains and mountains near and east of the divide. Wednesday morning might offer some powder for these areas.

The two forecast maps below, for snow through Wednesday midday, roughly agree, which increases our confidence. The first is a multi-model average and the second is the CAIC WRF 2km model. 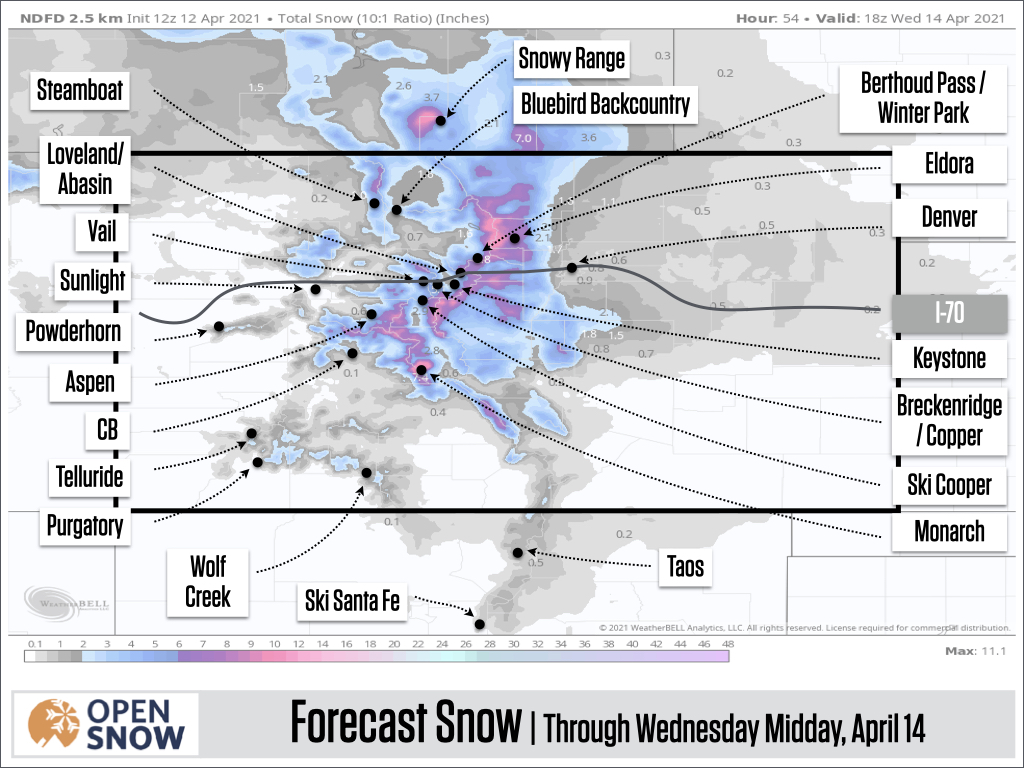 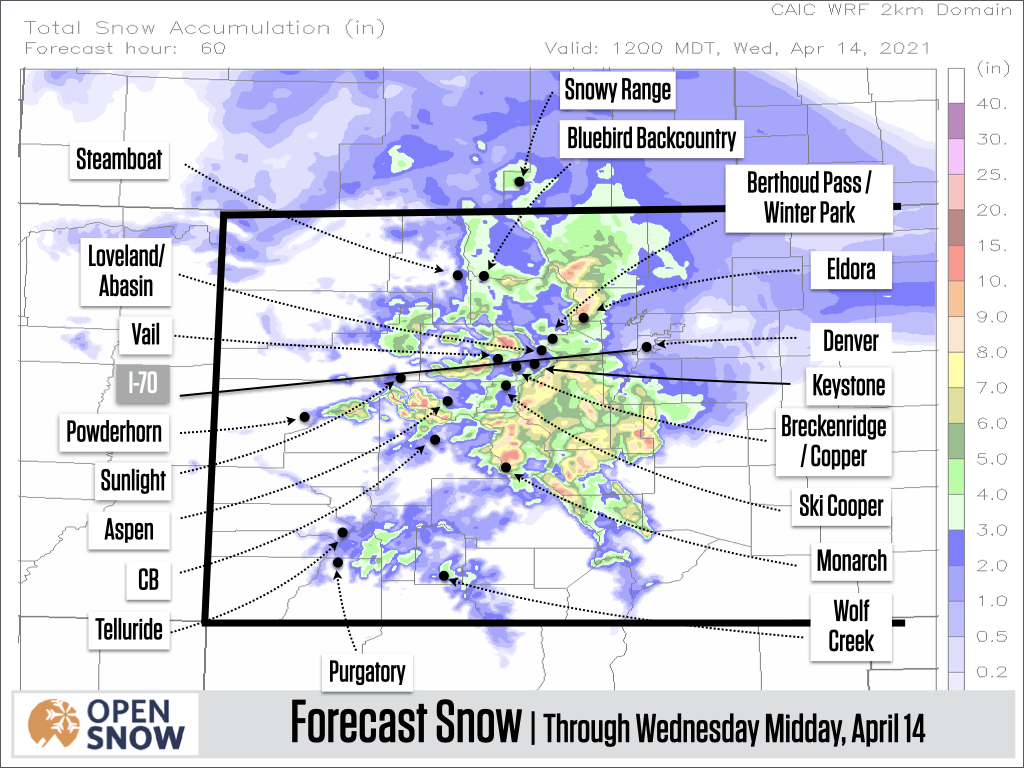 The second round of snow could be on Wednesday night into Thursday. I have much lower confidence in this round of snow compared to the one on Tuesday night into Wednesday. Yes, it's possible that there will be more powder on Thursday morning, but there's also a possibility that there won't be. I hope to narrow down the forecast in the next day or two.

The third round of snow should be Thursday night through Friday. Most models agree about this snowfall, and it could have a similar look to the snow on Tuesday night into Wednesday with 3-6+ inches for the northern mountains and those close to and east of the divide.

There will be more rounds of snowfall during the weekend and into early the following week. But there is little consistency between model forecasts during this time, so I am going to hold off mentioning any details.

The one thing that does appear consistent is that the last round of snow could be around Tuesday, April 20th, and after that, additional cool systems could affect Colorado, or at least the northeastern mountains, through late in April. Of course, we'll take the snow, and this active weather pattern through later in the month would also be good news for our water supply as any moisture at this point is very much needed.

I have a few more reader-submitted pictures to share over the coming week.

Below, a deep backcountry day in the northern mountains last season. The only comment from John, the skier, was "Very tasty!" Indeed! 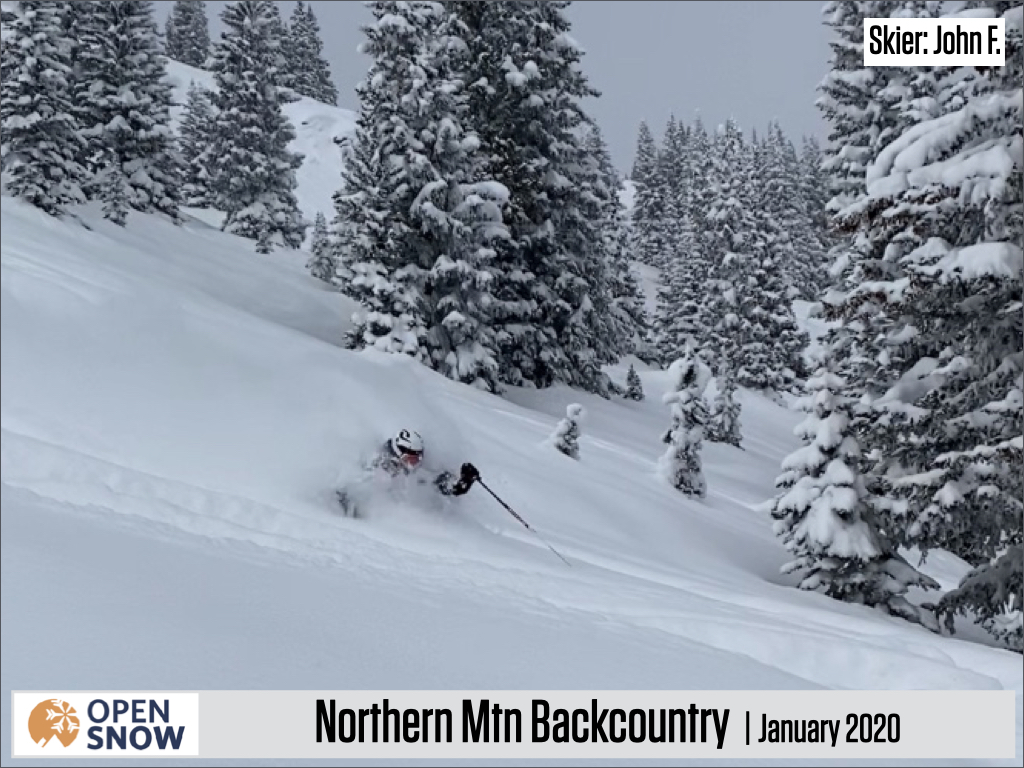