Next storm arrives on Sunday 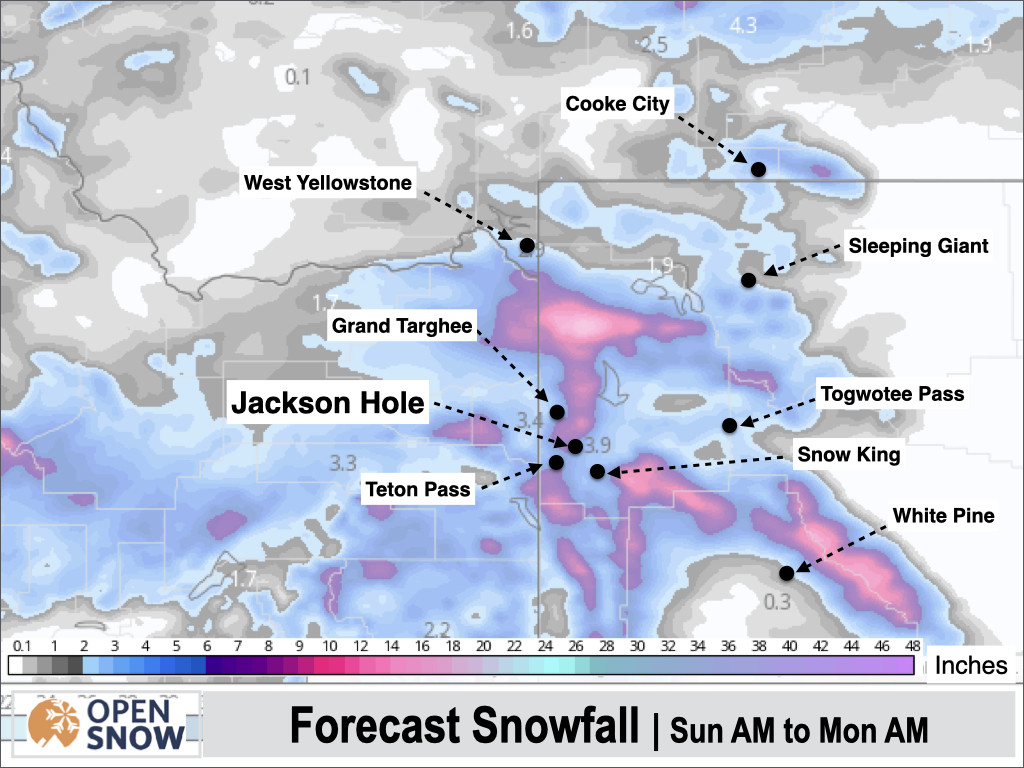 A break in the pattern will occur on Saturday, then the next storm will bring snow to the area on Sunday and the snow forecast is trending up. Sunday afternoon could offer some fun storm skiing, though the new snow will be denser than recent storms. Additional snow showers will arrive Mon-Tue and this will be lighter density & will favor Targhee. The next stormy period could arrive Dec 9-12th.

We have cleared out with cold air settling into place after picking up another 1-2 inches in the Tetons on Friday. Temperatures are starting out well below zero in the valley and in the single digits above zero in the mountains as an inversion is setting up.

I expect the inversion to weaken but remain in place through Saturday afternoon with highs in the mid/upper teens in the valley and low 20s at 9,000 feet.

Mostly clear skies up high with areas of low elevation fog/low clouds on Saturday morning will give way to partly cloudy skies (mid to high clouds) late in the day.

A storm is on track for Sunday, and it's looking a little bit better compared to my last post as we'll have a nice surge of moisture arriving from the southwest, along with good support from the jet stream to enhance snowfall rates on Sunday afternoon especially.

Snow will begin on Sunday morning around or just before sunrise and will gradually pick up through the deay with the heaviest snow on Sunday afternoon. Snowfall rates will become lighter and more intermittent on Sunday evening and Sunday night.

Wind: Winds will be out of the southwest on Sunday with gusts as high as 30-40 mph on the upper slopes of JHMR and Targhee. On Sunday evening, winds will become lighter and veer to west/southwest.

Temperature Trends and Snow Density: Milder air will be arriving with this storm with temperatures reaching the low/mid 20s at 9,000 feet by midday Sunday and remaining steady for most of the snow event. This will result in a higher-density snow event with snow-liquid ratios of around 10 to 1 (10% density). Valley temperatures will be right around freezing on Sunday afternoon and evening.

I'm upping my snow forecast to 5-9 inches in the Tetons and 2-5 inches in the Jackson Hole Valley. Most of this will occur during the daytime hours on Sunday, so I would target Sunday afternoon for the best conditions (though more snow will arrive on Monday... more on that below). 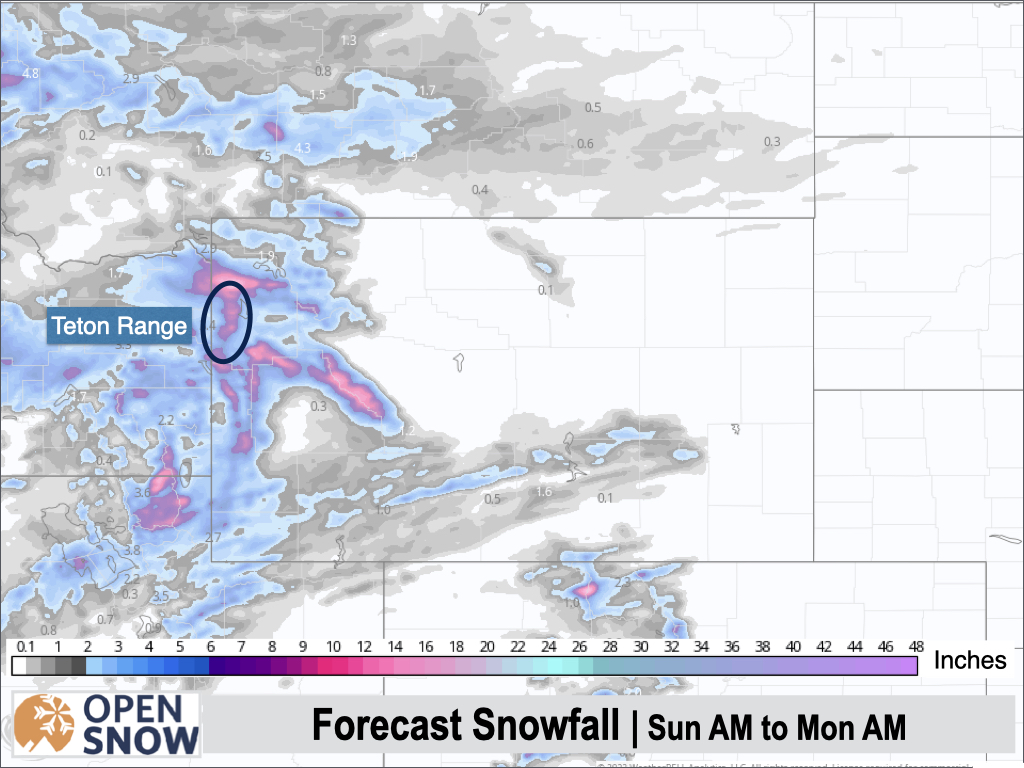 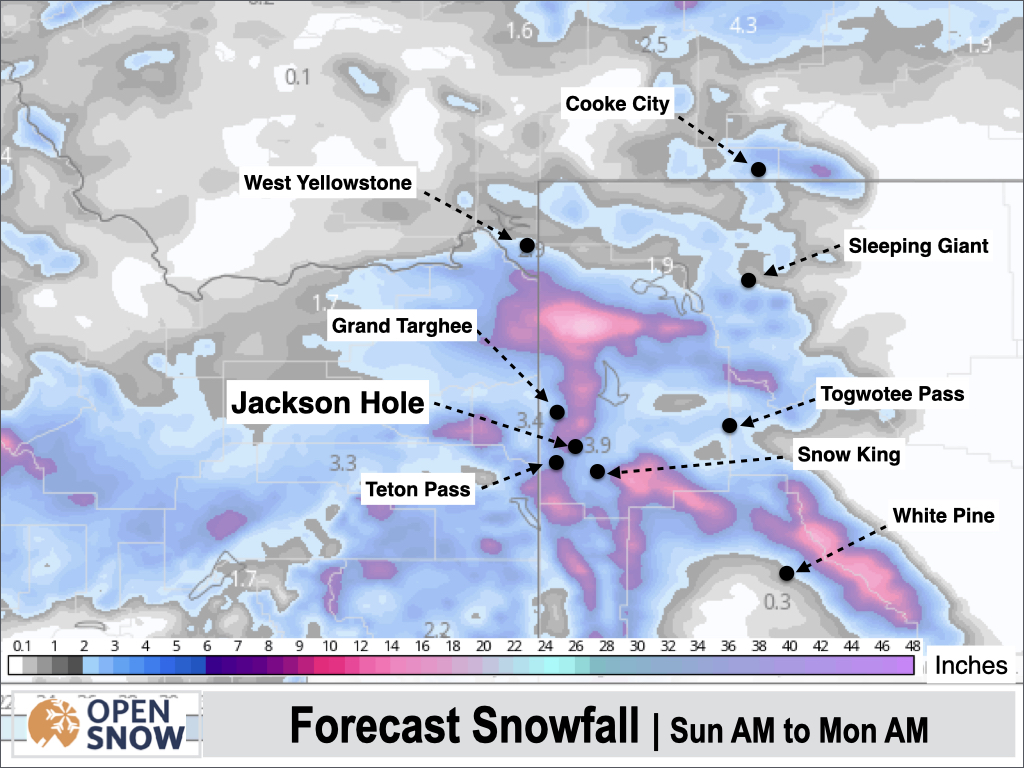 A cold front will arrive early Monday morning, and this will cool temperatures back down following Sunday's milder temperatures.

The storm from Sunday will be located well to the south while another storm will be passing just to our north. We should see enough moisture reaching the Tetons to produce additional terrain-driven snow showers on both Monday and Tuesday – with Monday's activity looking slightly heavier and more widespread.

For now, I'm expecting another 2-6 inches total in the Tetons on Monday-Tuesday, favoring the Targhee side more than the JH side since the snowfall will largely be orographic in nature (moisture reaching the west side of the Tetons and being forced to rise) with limited forcing in the atmosphere otherwise. Keep an eye on Targhee, as they can occasionally see upside surprises in these patterns.

Snow-liquid ratios will be closer to 15 to 1 on both days, so the new snow will be drier and more powdery compared to Sunday's snowfall. Skiing conditions will be good both days with light refills expected.

The JH Valley should only see an inch or less total on Monday-Tuesday as less moisture will be reaching the eastern side of the Teton Range.

We should see a break in the pattern on Wednesday (Dec 7) and Thursday (Dec 8), then the pattern will turn more active again with 1-2 storms possible in the December 9th-12th timeframe. I don't have much confidence in the details yet, but at the very least, more snow is likely during this window.

Thanks so much for reading and have a great weekend! Next update on Monday (Dec 5).