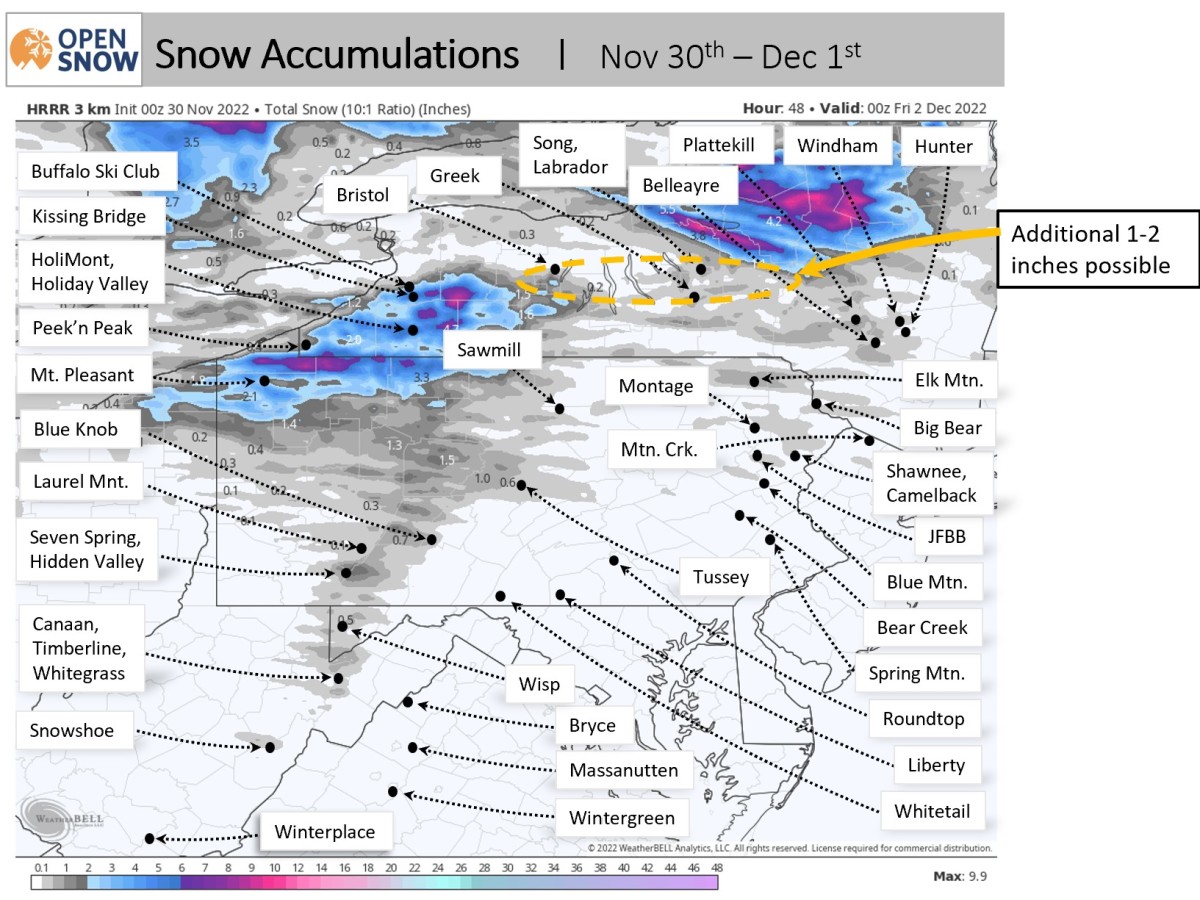 A wet Wednesday with gusty winds will give way to accumulating lake effect snow in the northern Mid-Atlantic. Expect 1-6 inches of snow with the highest totals in the northwest Mid-Atlantic. Snow clears on Thursday as the next storm system moves into the region Saturday with light rain. Let’s break it all down…

Widespread rain affects the region Wednesday with moderate to heavy downpours at times associated with a strong cold front. This cold front will move west to east from 10 am to 4 pm. Expect gusty winds for the higher terrain of the western Mid-Atlantic and upstate NY at 40-50 mph.

Here is a look at the HRRR model’s depiction of precipitation type and intensity from 4 am Wednesday, November 30th to 7 pm Thursday, December 1st.

With cold temperatures in the low 20s, snow-to-liquid ratios will be 12-14 and make for some soft turns on resorts that are open in NY. Let’s take a look at the HRRR model’s snow accumulations on Wednesday and Thursday. 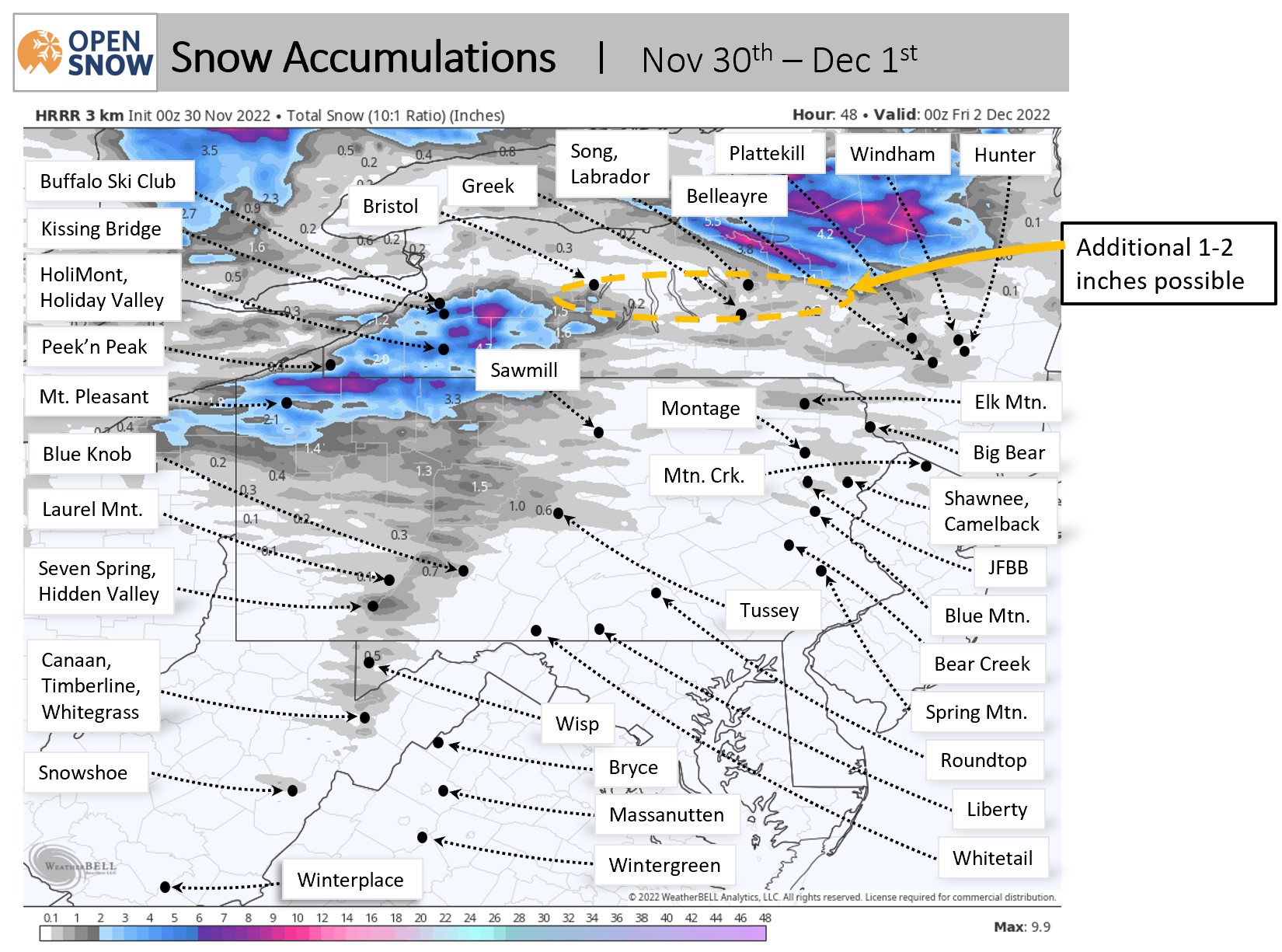 Make sure to check out the 5-day snowfall forecast from the OpenSnow PowderFinder.

Temperatures will be plenty cold enough Thursday night for snow-making operations to ramp up throughout the region. Unfortunately, that cannot be said the same Friday night as warm air moves back into the region ahead of the next storm system moving into the region on Saturday.

This storm system will track well to the north of the region Saturday and bring scattered rain showers throughout the region. This storm will NOT be a washout so make sure to keep your ski and ride plans this weekend. A few snow showers are also possible in the north and west Sunday!

The storm track will remain active starting next week on Monday, December 5th. Rounds of storm systems impacting the western US will continue to track to the north of our region. This continues the theme of initial rain with backside snow showers.

As powder piles up out west, I am still keeping my eye on a pattern switch after Wednesday, December 7th. A blocking pattern is set up near Alaska and Greenland, which will break down and potentially move a large area of cold air into the region. Here is a look at the Euro model’s predicted upper-level pattern on Wednesday, December 7th. 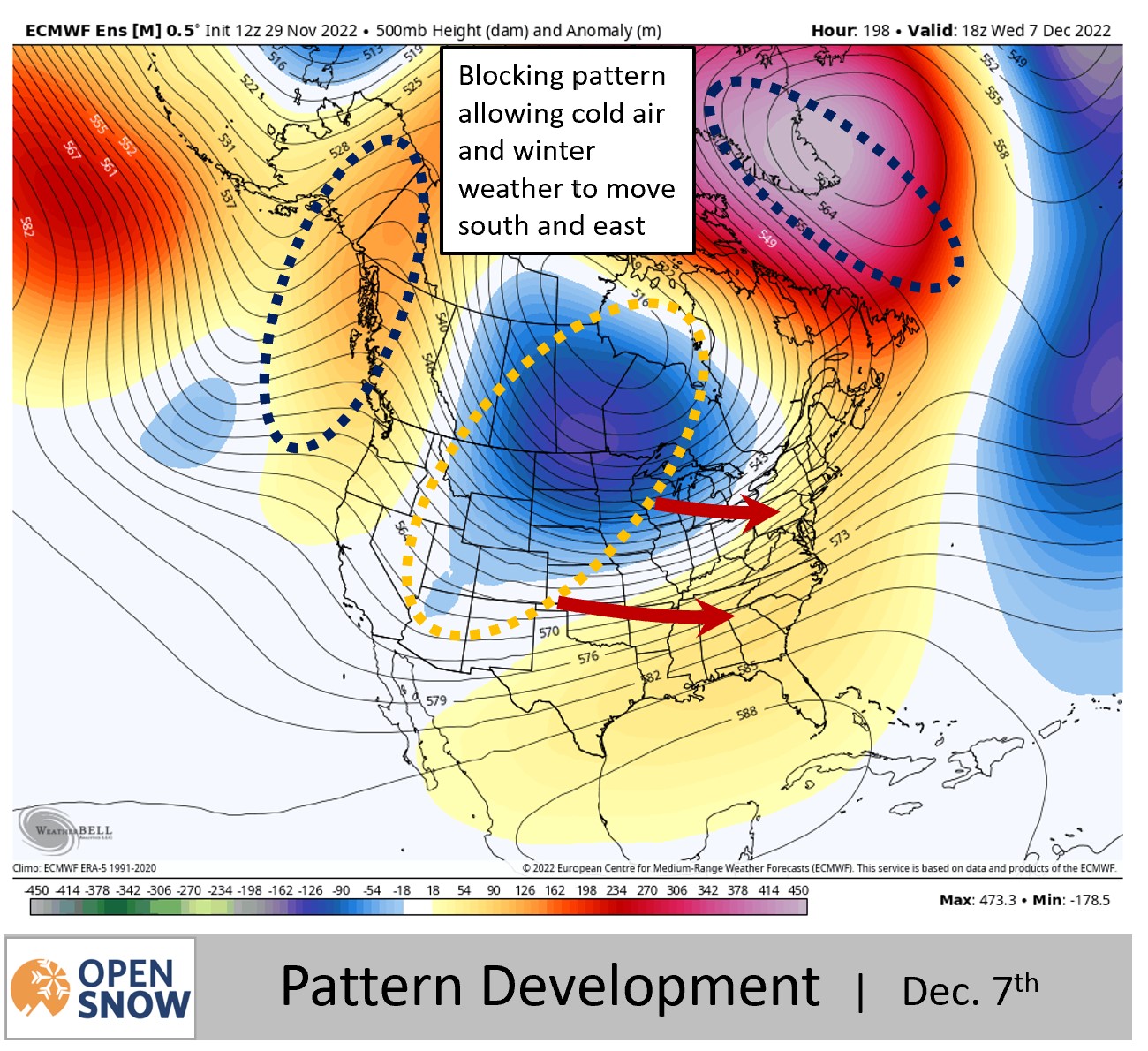 This area of cooler colors and cold air will move south and east near the end of next week around Thursday and Friday, December 8th and 9th. This will in turn move the jet stream and bring chances of lake effect snow and storm systems with accumulating snow to the East Coast.

While long-term forecasts are inherently hard to predict, the models continue to show a strong signal of this happing. Let’s look at the Euro model’s predicted upper-level pattern from Tuesday, December 6th to Sunday, December 11th.

This potential pattern switch will definitely help us get through the next week. Stay tuned for more updates and I will have the next forecast Friday morning.