By Croix Christenson, Meteorologist
Posted 1 month ago
December 4, 2022 8:24am CST

State of the Snowpack Sunday will bring warmer and more pleasant conditions to the slopes with sunshine for many and highs in the 20s and 30s. The start of the work week will bring a few light snow chances before a more active pattern is possible starting around December 9th for the Midwest.

To kick off today's forecast let's take a look at where and how much snow is on the ground in the midwest. 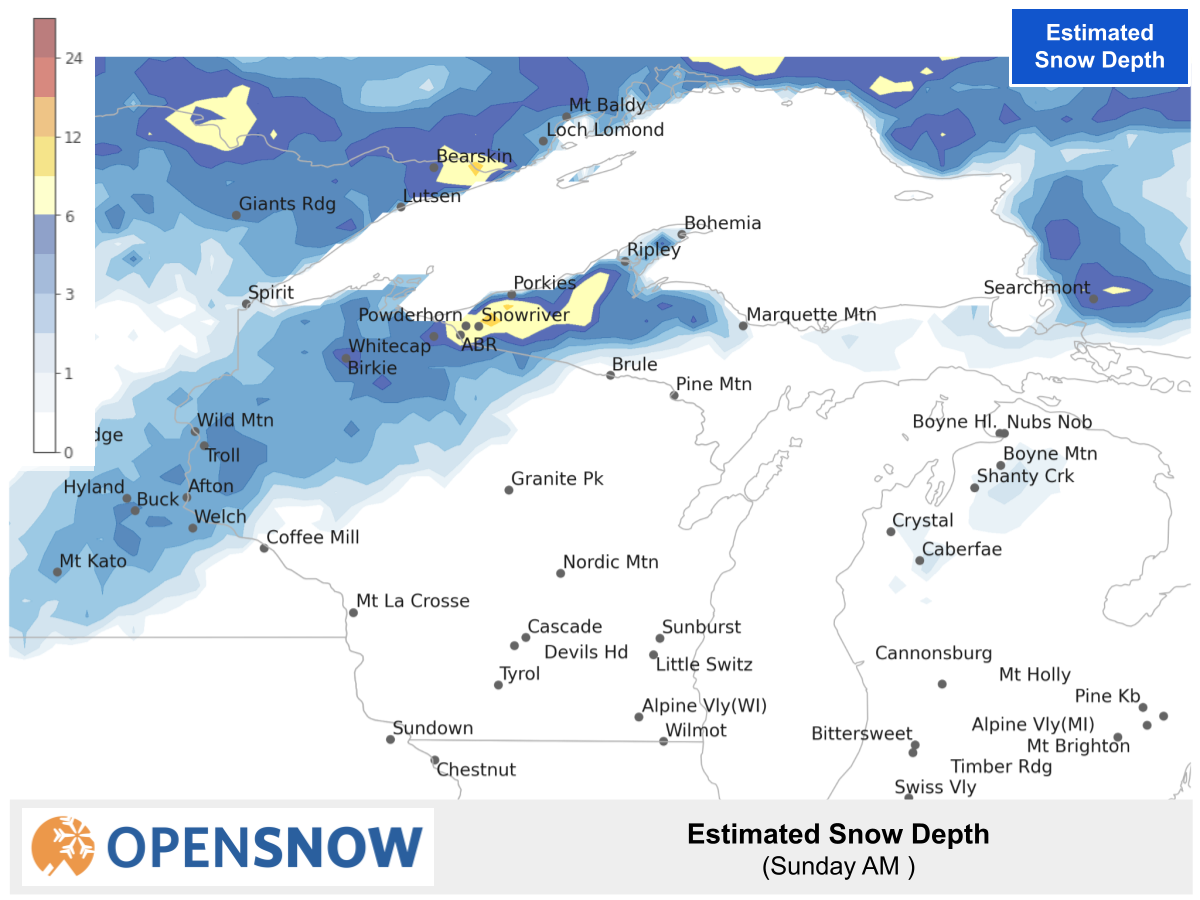 Generally, a couple of inches up to 6 inches can be found from the Twin Cities up to northern portions of Wisconsin, with 6-12+ found near Ironwood, Michigan. In northeast Minnesota, snow depth runs from a few inches near Duluth to nearly a foot up near the Gunflint.

Over near Searchmont, 4-8 inches of depth could be found with a dusting to a few inches in northern portions of lower Michigan. Keep in mind this is not the reported snow depth at the resort, these maps help get a better idea of how much snow might be in glade runs or for nordic locations. Or if you also snowmobile this can be used as a tool to locate areas to hit the sleds.

For comparison, here is the reported base depth, or how deep the machine-made snow is at various resorts (or natural for nordic locations): 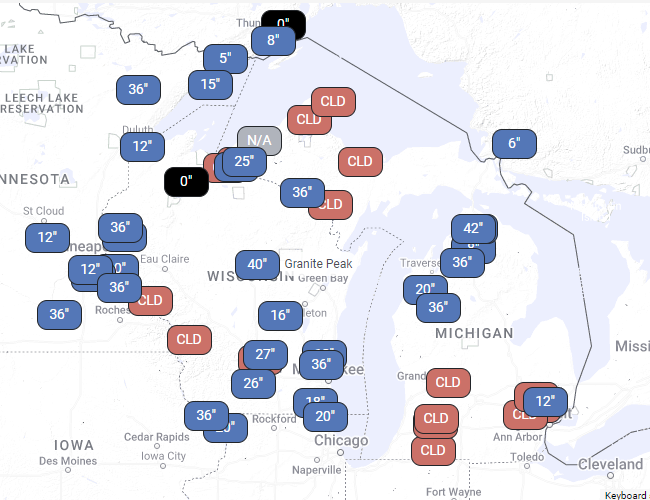 The short-term forecast is getting rolled into the extended forecast for today's forecast, so check below for those details.

Today I am going to use 24-hour forecast snowfall to discuss the next week across the region. All of the 24-hour snowfall graphics used below are from the ECMWF Ensemble, which is 50 different simulations put onto one graph.

Starting with Spirit Mountain as a proxy for northeast Minnesota, light snow is possible starting on Tuesday, December 6th, with amounts in the dusting to a couple of inches possible. Around Saturday, December 10th the models suggest we hit a more active period with one or more chances of a storm.

With more blue, pink, and purple in the graph, this suggests we could see a more significant snowfall. The models are in poor agreement on timing, however. 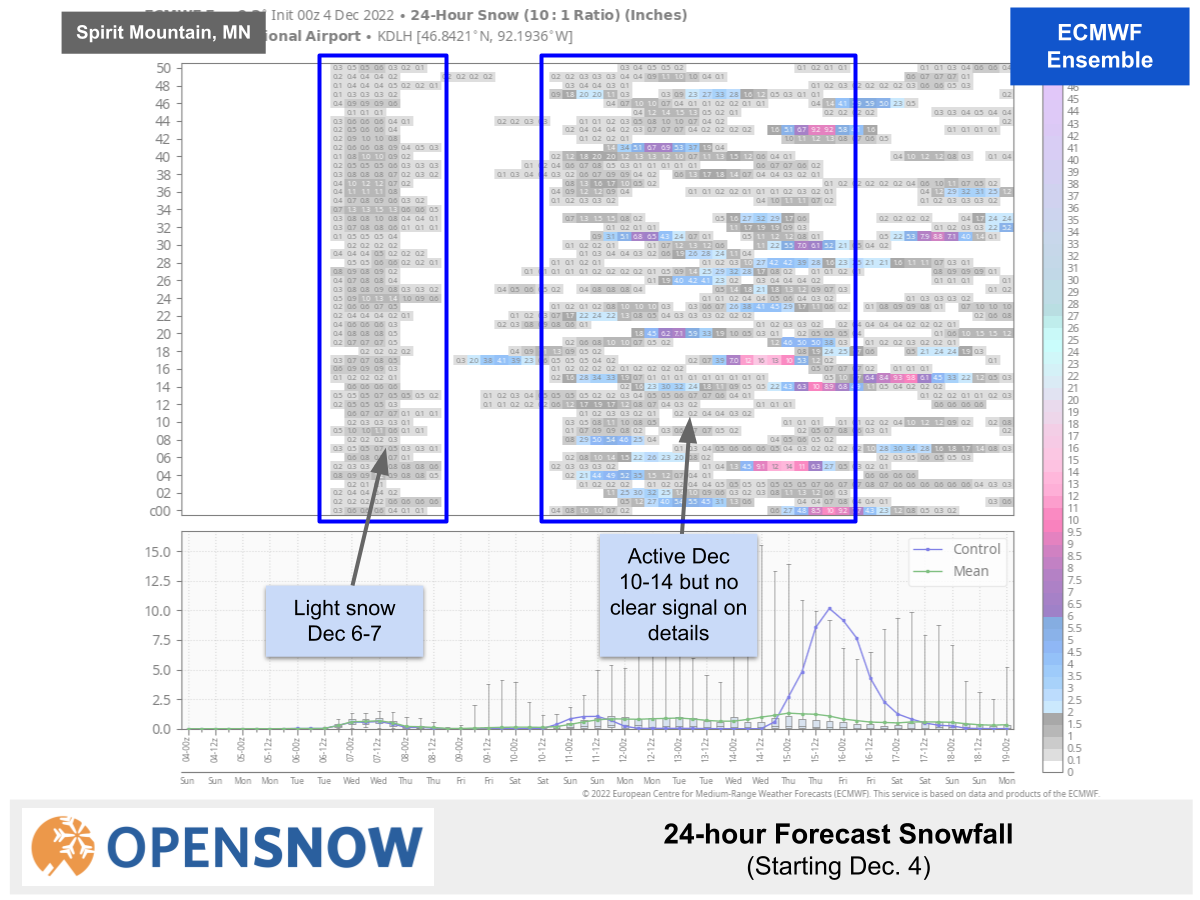 As we shift east into the UP of Michigan, models are in fairly good agreement that off-and-on light snow and lake effect snow will continue until around Thursday, December 8th. Total snowfall during this period will range from an inch or two to around 6 inches.

Similar to Spirit Mountain, models suggest that the UP will get in on the same active pattern beginning around December 10th. 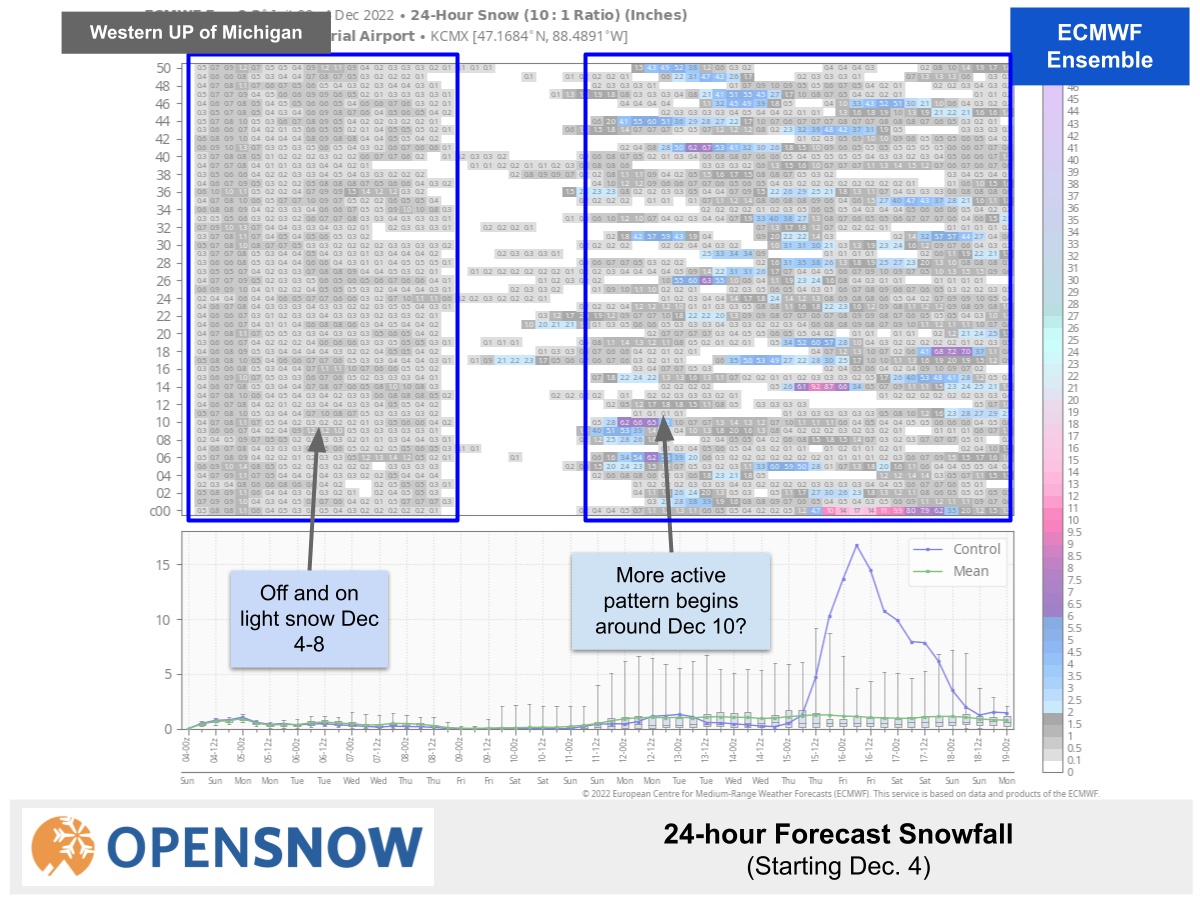 Looks mostly dry and quiet with a little bit of light snow through Thursday, December 8th. Starting around the 10th, a more active period is likely to occur, though there are fewer ensemble members (model runs) that have snow when compared to the prior images for Spirit Mountain and the UP.

I would say it is possible the resorts in the Twin Cities region get a bigger snowfall during this period but I would not say it is likely at this time. Too many of the members show all white or light grey in the graphic for snowfall from Dec. 10-16. 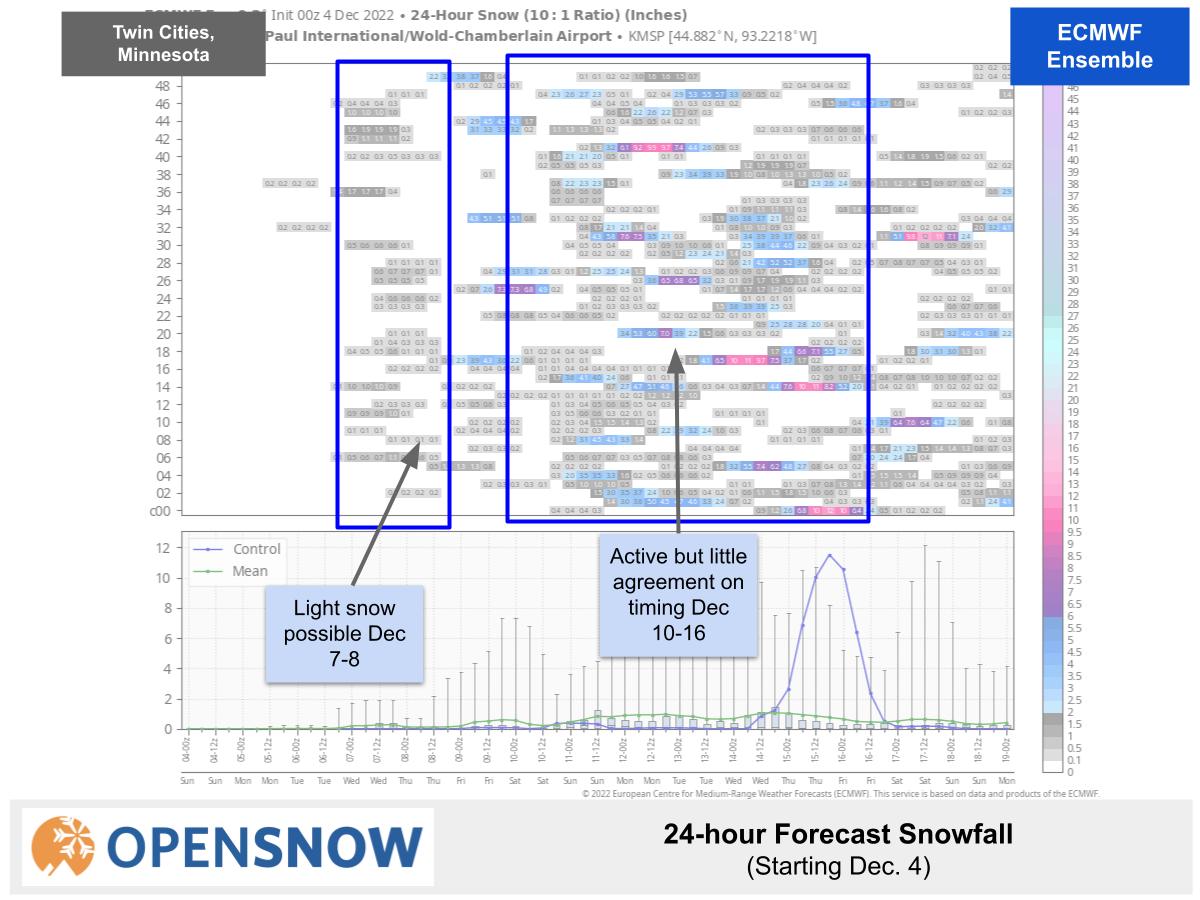 Continuing south to southern Wisconsin, it looks like a little bit of light snow is possible around the middle of next week (Dec. 6-7) before another chance comes around Friday, December 9 and yet another one is possible in the Sunday-Tuesday (Dec. 11-13) time frame.

It is way too early to talk about specific amounts but the models do suggest that the storm around Dec. 9 and Dec. 11-13 has some potential to bring more than just a dusting to an inch as there are lots of darker blues, pinks, and purples in the graph below. 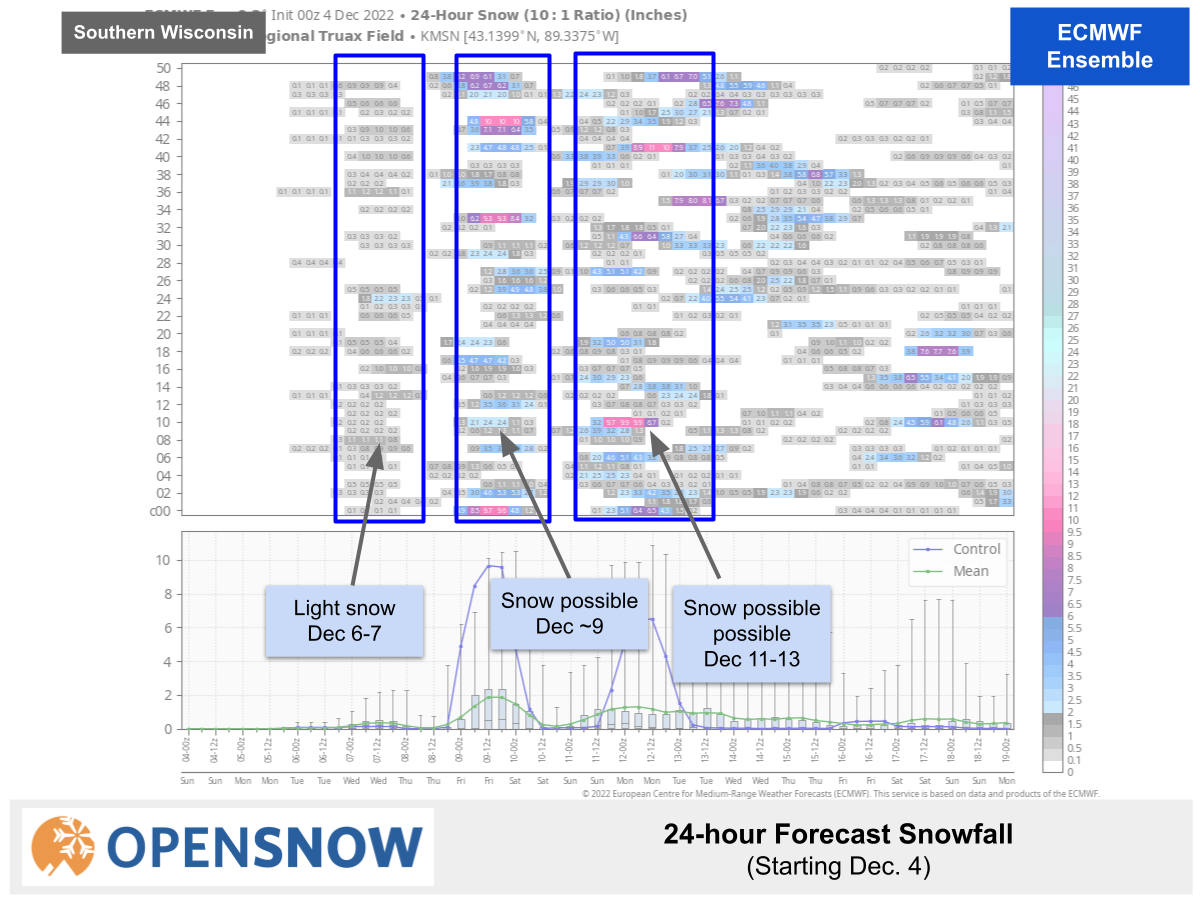 Finally, one more stop on our tour, let's head northeast into the northern portions of lower Michigan and use Traverse city as a proxy for the region. Off and on light snow looks likely from Tuesday, December 6th to Thursday, December 8th.

After a brief break, it looks like a more active pattern with both lake effect snow and possibly one or two bigger storms in the December 12-20 range. This is a long way out in fantasy land but it's nice to see this signal. The bonus of this more active pattern being a week away is this allows locations to make more snow and open more terrain! 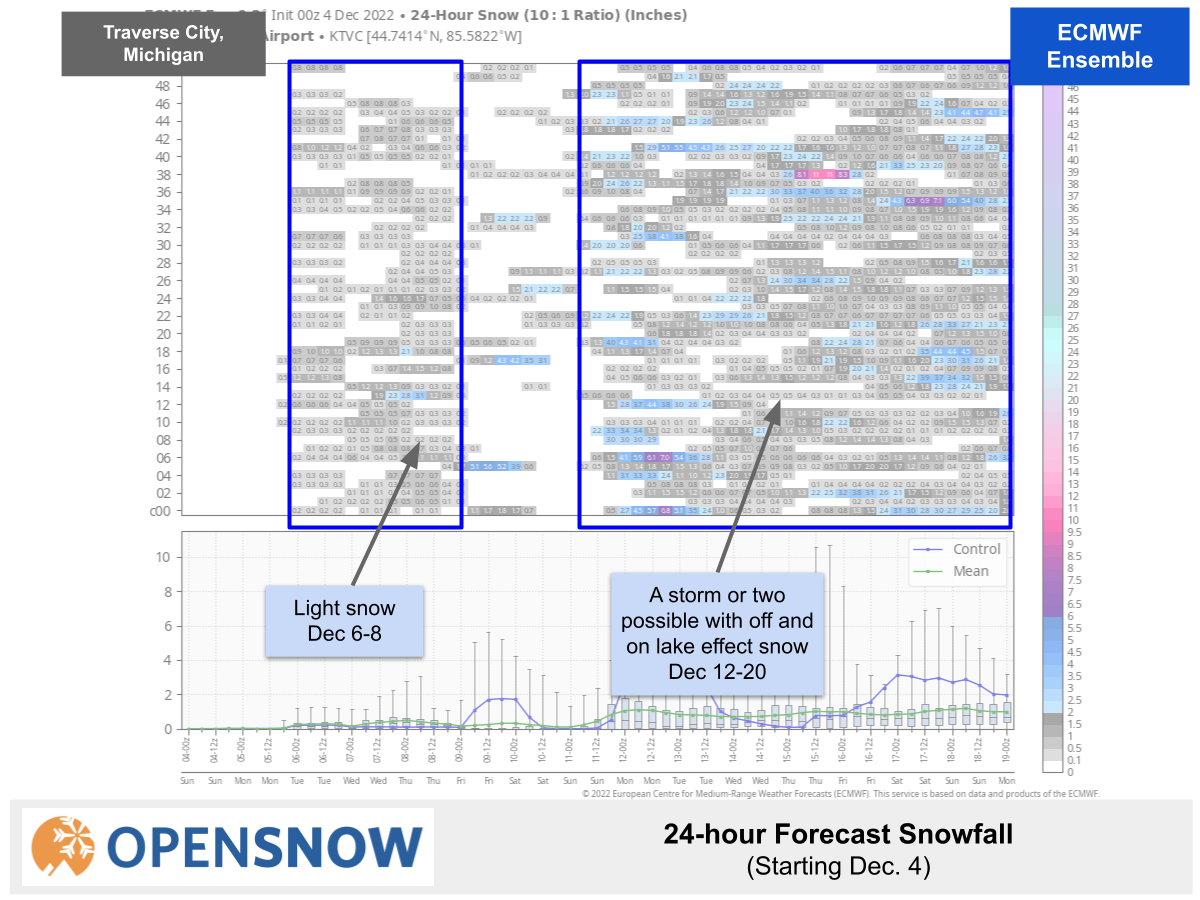 It does look like we might get a brief warmup late next week into the following week (around Dec. 9 - Dec. 13) as both the ECMWF and GFS ensembles have hinted at this for a few days now. The most recent runs of those models are in very good agreement that some milder conditions will pay us a visit. 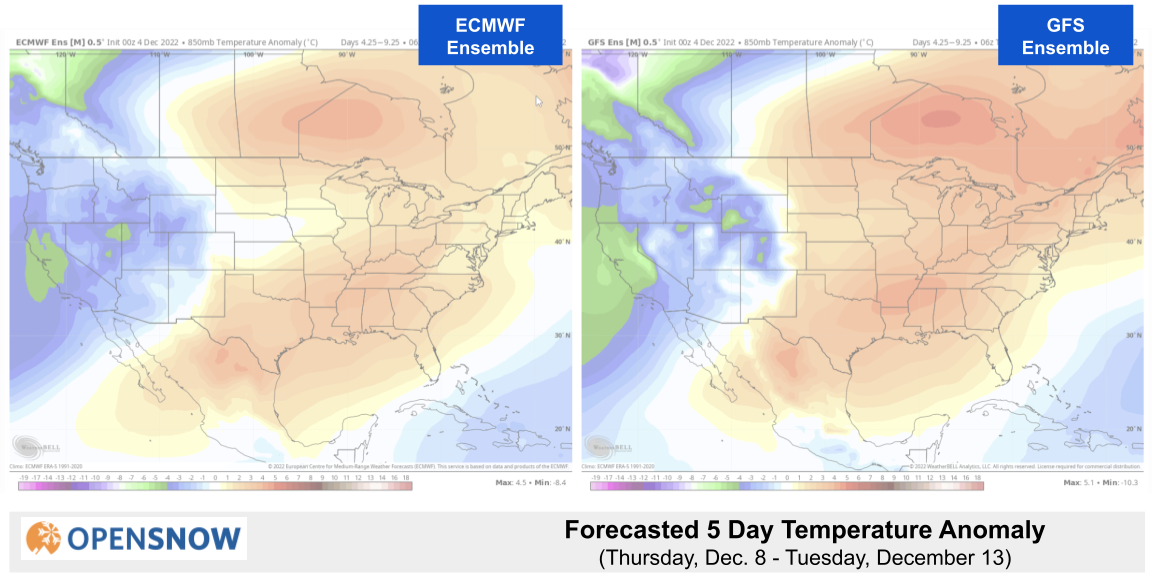 The month of December:

Overall, most of the signals point to a colder-than-normal December for us in the Midwest. Keep in mind, however, this is a 30-day average, so there will be periods where we are near or above normal, such as the signal for late this week into next week which was discussed above.

The good news and the main reason I am showing these graphics is that this should allow most locations to be approaching 100% open by late December! The main reason I think that is likely? Generally, favorable conditions for snowmaking. A few exceptions may exist, such as Bohemia, which relies on natural snow for example. 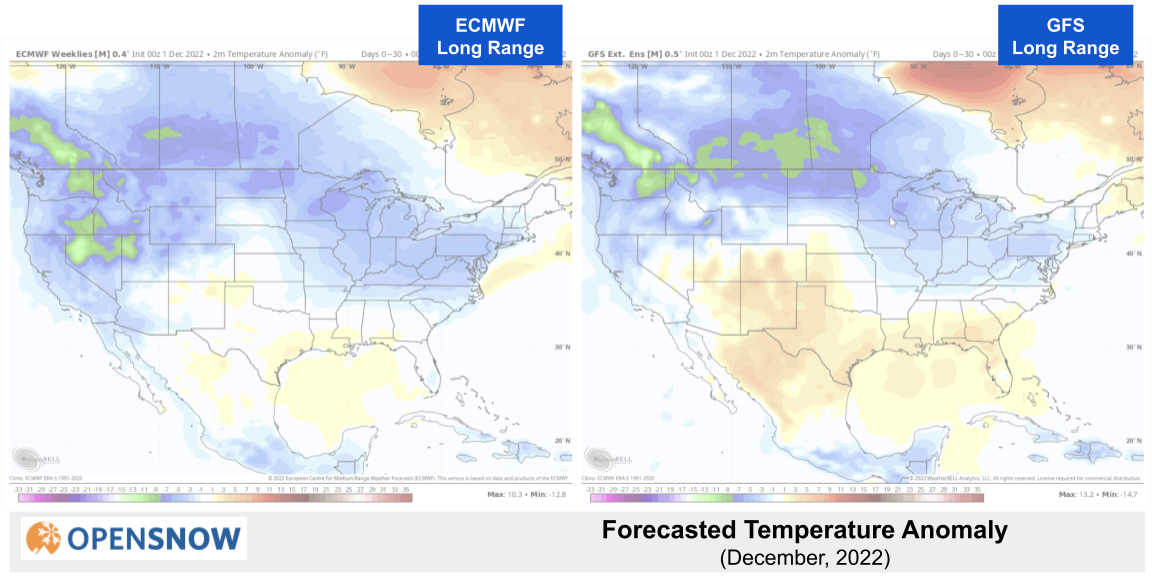 The signal I have lower confidence in is the precipitation anomaly. This one gets a little bit trickier because, while the models may handle the overall pattern for the month, all it takes is one or two big storms and we are above normal for portions of the Midwest.

Couple this with the fact that if we are below normal temperatures, I would expect consistent rounds of lake effect snow, which could result in near-normal or even above-normal snowfall for some. 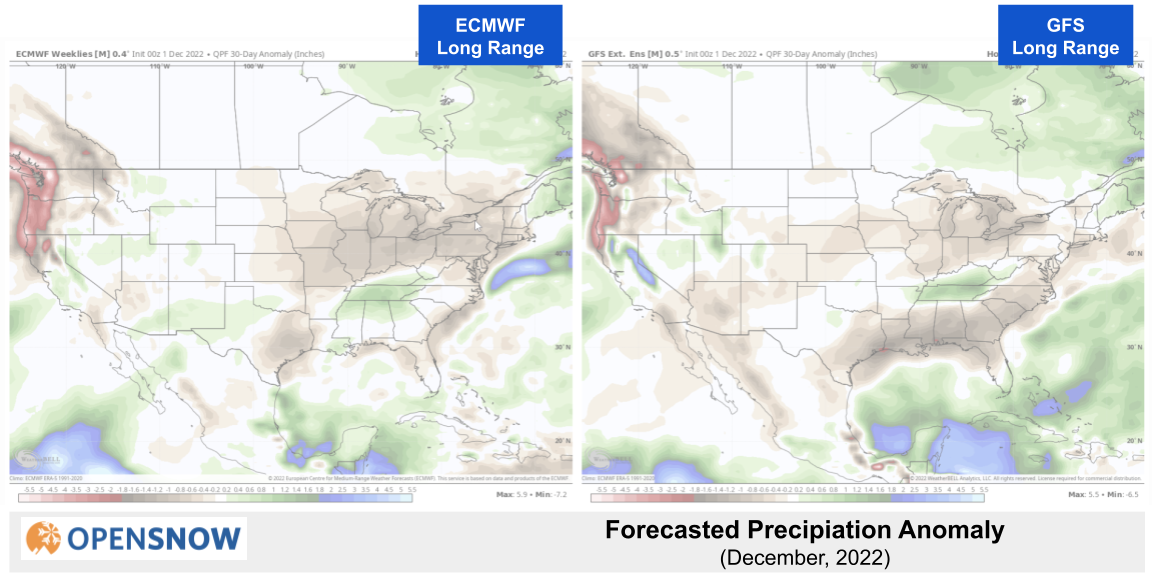 With a quieter start to the work week, expect the next update on Tuesday!