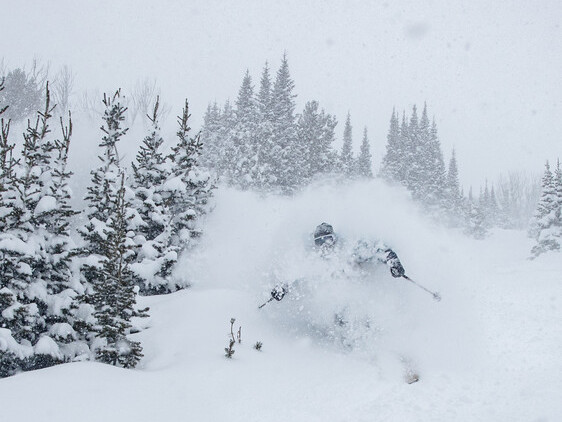 With Big Sky, Red Lodge, Lookout Pass and Great Divide set to conclude their winter operations this weekend, I thought I’d share some observations of this unique season from both sides of the Divide. Best news of all, every ski area from the mom and pops to the fancy resorts made it through this pandemic winter to the end without closing for health reasons. Kudos to everyone who made that happen!

For the westside of the Continental Divide the 20/21 La Nina winter delivered just enough snow at just the right times to be a fairly good, but not great winter. There were variations in weather patterns across the Westside with the majority of the storm systems tracking to the south from Lookout Pass to Lost Trail Pass. This can be seen in the river basin snowpack map below with the Bitterroot (Lost Trail) having the highest snowpack in the state at 108% of average. In contrast, the Flathead basin (Whitefish, Blacktail, Turner) had just a so-so winter with a current snowpack of 91%.

East of the Divide had its highs and its lows. Lows were in the first half of the season when extended high-pressure systems bumped storms to the south to the Tetons. The recovery started in the beginning of February with a few big dumps hammering places like Big Sky, Bridger and Showdown. It kicked up a notch during the first two weeks of March with several feet falling at most areas/resorts across the region. Red Lodge was having a low tide year but finally got in on the action in March with one memorable storm dumping 22 inches in 24-hours. Snowpack percentages were fairly unform ranging from 93% at Big Sky, Showdown and Bridger to 96% at Great Divide, 97% at Red Lodge and 101% at Teton Pass along the Rocky Mountain Front. 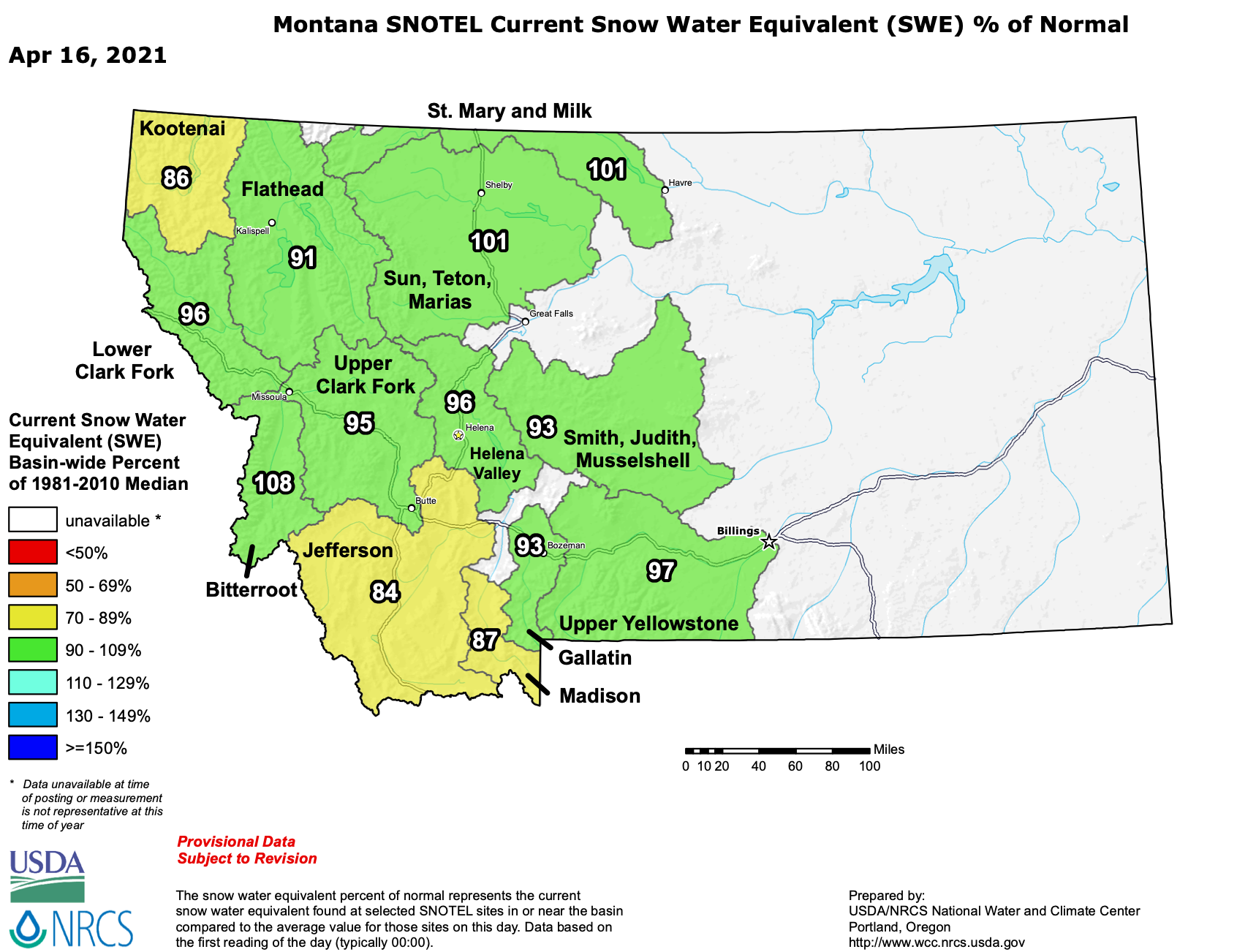 Lost Trail Powder Mountain lived up to their name in February and March with many epic powder Thursday’s. Other standouts were Showdown where the deepest 24-hour snowfall in Montana this winter occurred in February with 24 inches. Red Lodge also had a 22 inch dump in 24-hours in March. Lookout Pass, on the Idaho border racked up an incredible 424 inches this season. Big Sky and Bridger Bowl enjoyed epic week-long storms in early February and early March that kept the cold smoke refilling run after powdery run.

Lift lines were longer than usual at most places due in part by chairs running at partial capacity but also due to a spike in out of state visitors. Sprinter vans were peppered across the parking lots with plates from California to Minnesota and most states in between. With the pandemic winter, Montana became one of the least restrictive states in the West relating to lift ticket reservations requirements. The only places where reservations were required were at Big Sky and Bridger Bowl. Whitefish, Red Lodge, and all the rest allowed daily lift ticket sales without restrictions.

Heartfelt thanks go out to the lifties who had the extremely tough job of insuring the diverse cliental wore their masks. Kudos to ski patrol for keeping our slopes safe and management for operating with limited human resources during the tail end of the season. And finally, thanks to all the skiers, borders, mono-skiers, snow bladers, and snow bikers out there that wore their masks and endured longer lift lines. Make no mistake about it, this was an unusual winter with lots of challenges. Not only did we make it, we shredded it to the bitter end! Thanks again for reading, see you next November.

Below: A quite memorable February 5th at Big Sky....  (courtesy of Big Sky Resort) 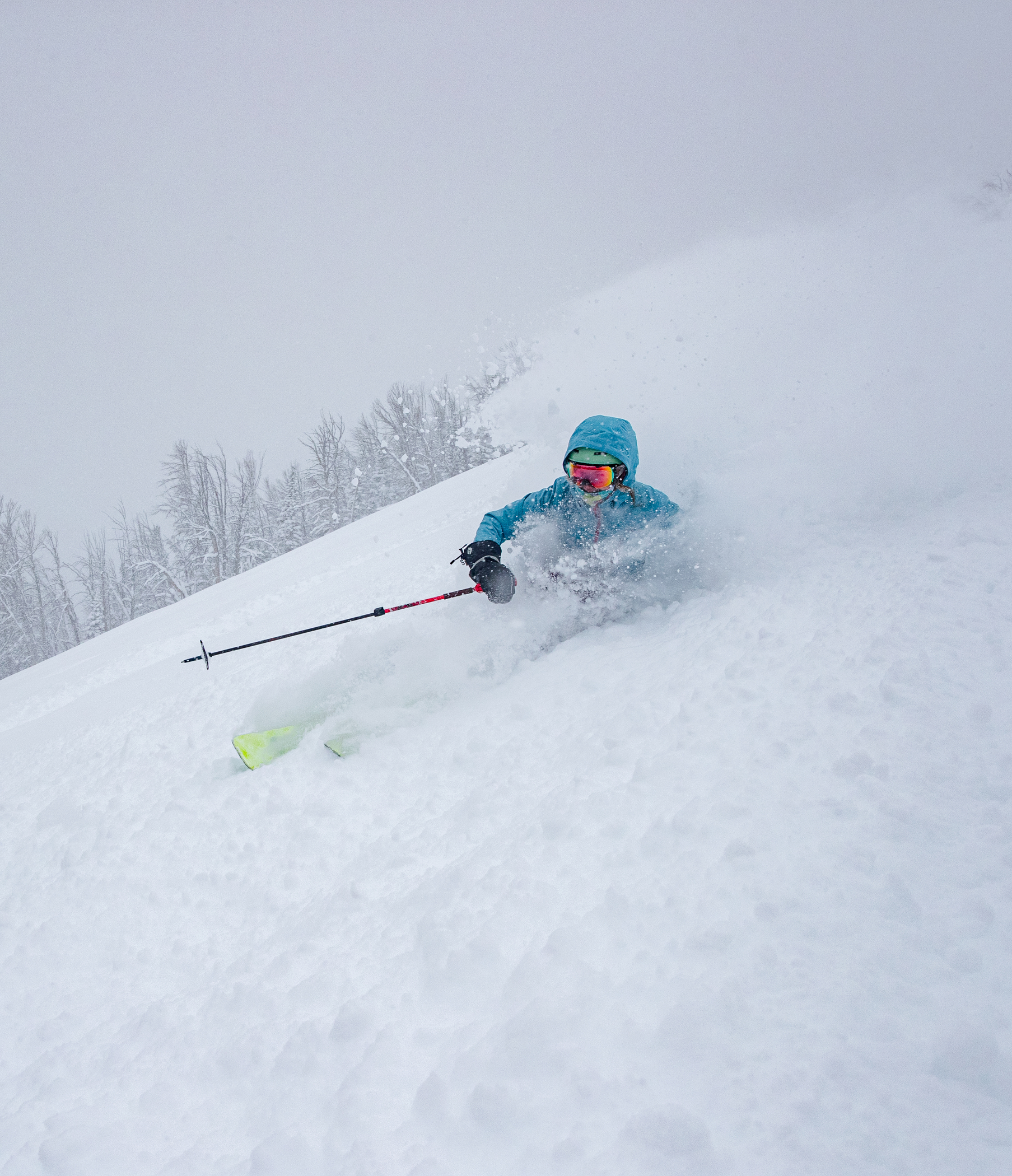 Below: Although Whitefish had a somewhat lean winter, there there a few epic days to remember, this one was on February 19th. (Courtesy WMR/R.McLaury) 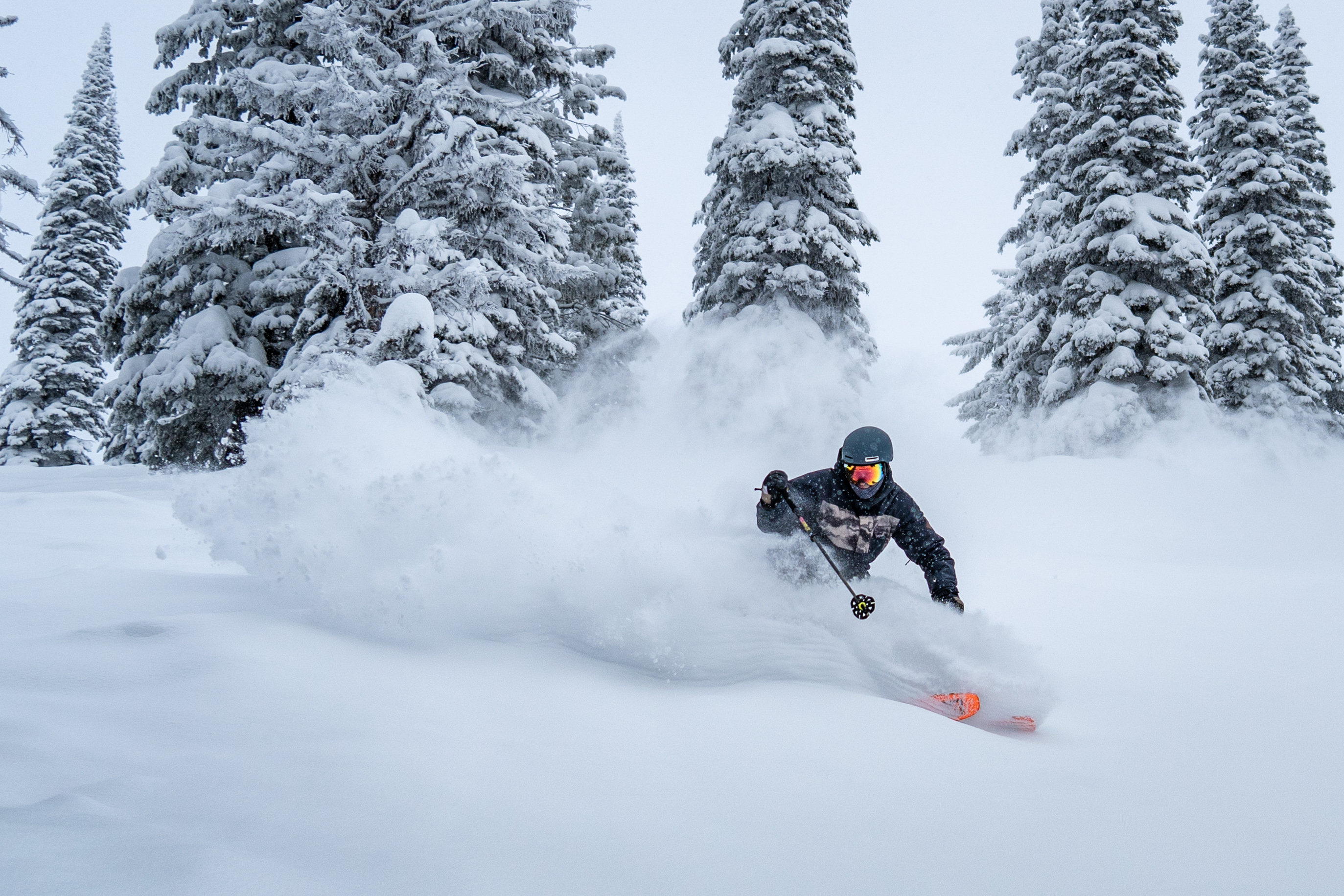 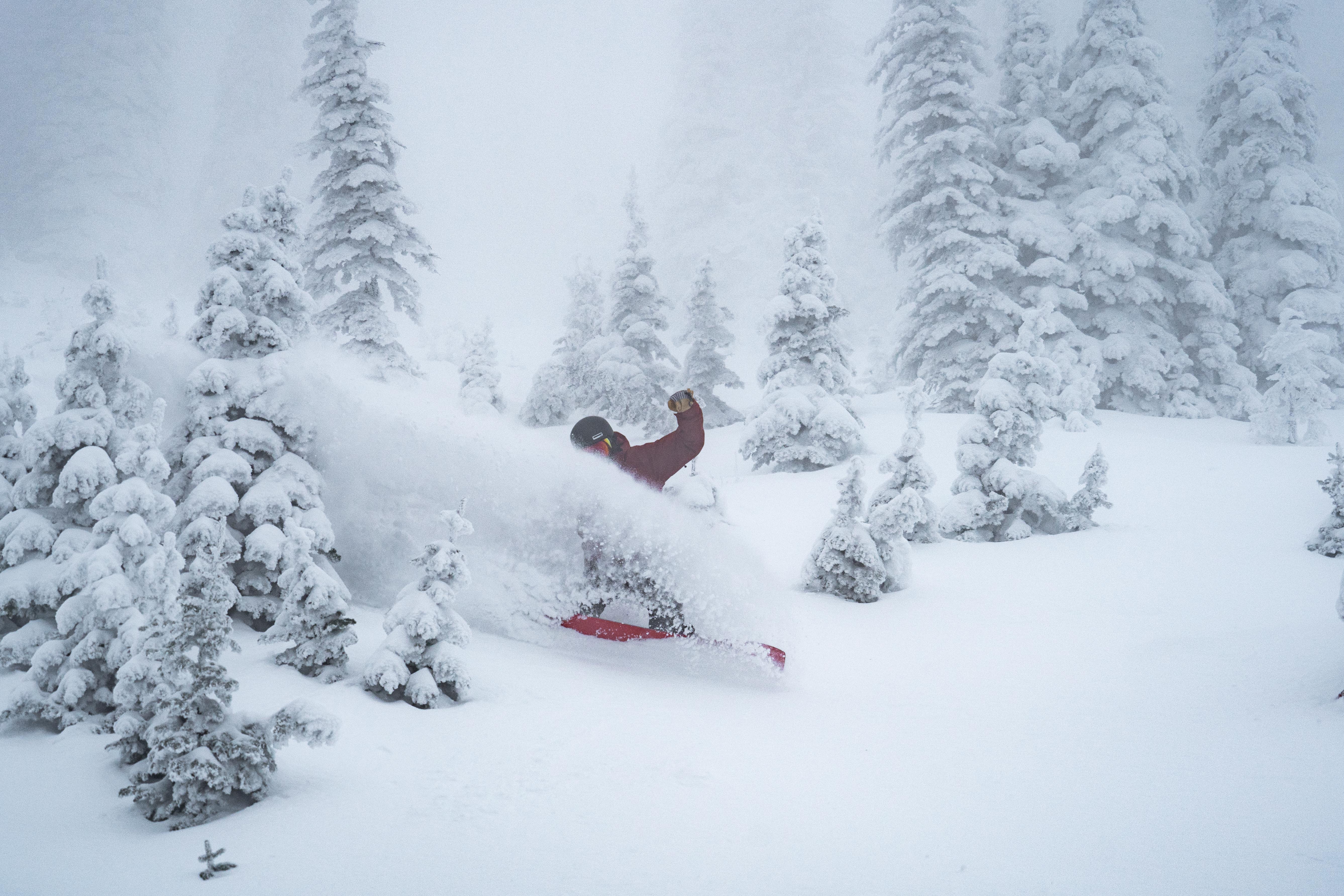 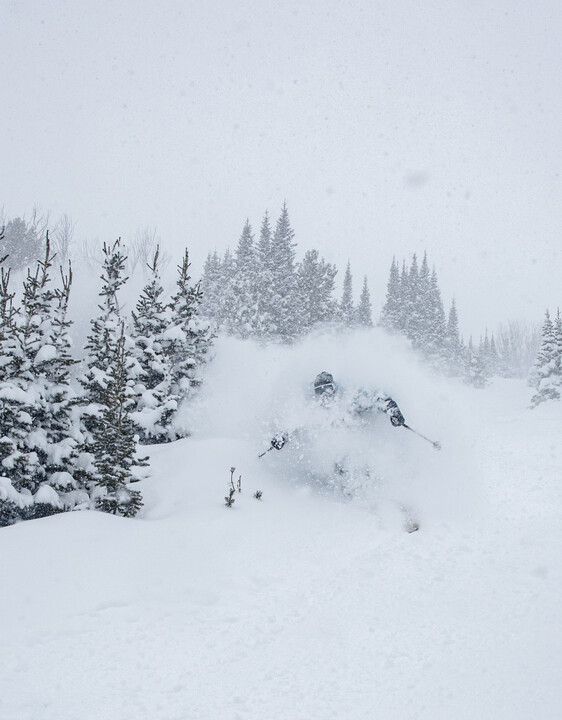