Heads up, there may be fresher snow! Read the latest Montana Daily Snow 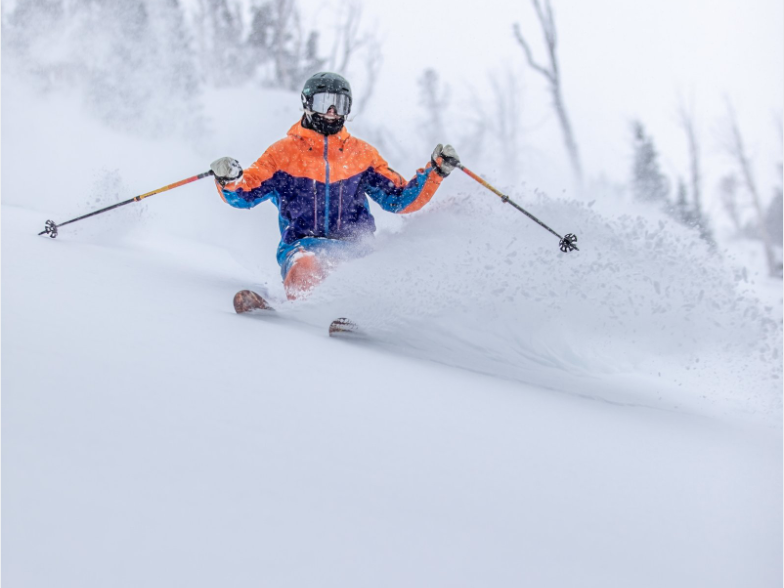 It’s powder Monday at Big Sky where 7 – 9” of cold smoke fell overnight. The Alpine snowtel at Bridger registered 6.6” of fresh snow there. West of the Divide, Disco was in prime location picking up 6” with Lookout reporting in at 2”. A Canadian low will bring another round of snow (Mon. PM – Tues. PM) mainly for the northern half of the state with 3 – 6”. An active pattern continues thru Friday.

Below: The latest snowpack percentages by average for river basins across Montana. SW Montana's Madison River Basin (Big Sky) snowpack has grown the most over the last 2 weeks. All other mountain locations remain above average. No complaints. 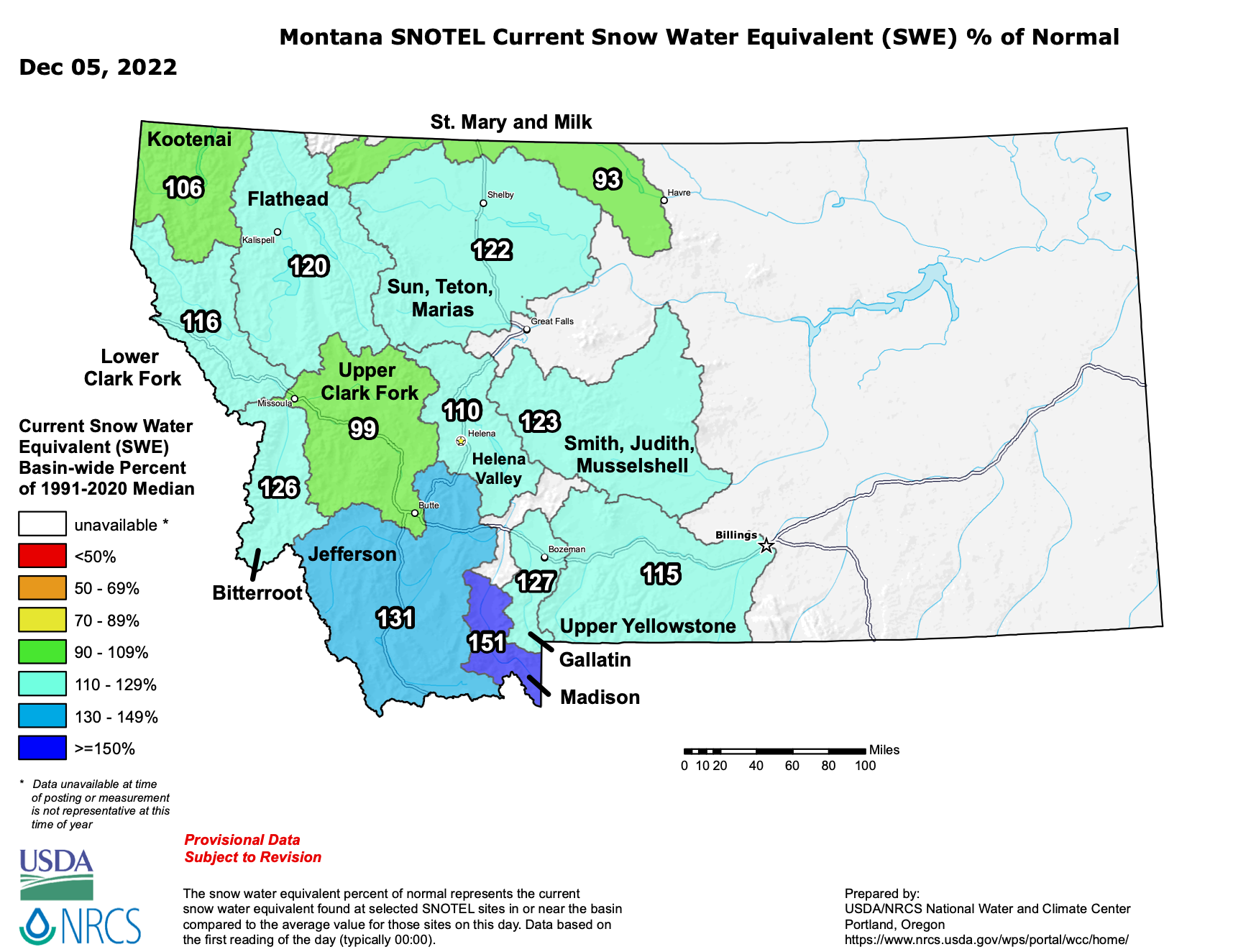 West of the Continental Divide:

For the rest of the day on Monday, light snow showers in the wake of the departing storm system may add another inch or two at Discovery, with trace amounts to an inch at Whitefish, Lookout, Snowbowl, Blacktail, and LT.

A Pacific low-pressure system is still expected to move inland from the Oregon Coast beginning Monday night drawing a backdoor arctic cold front east to west across Marias Pass (Continental Divide). This cold air will interact with the Pacific moisture bringing periods of consistent light snowfall Tuesday into Tuesday night. NW Montana locations near the Divide (Whitefish) look to be in the best position with chances of 3 – 5” through Tuesday night. Discovery is close to the Divide as well but will be just south of this northerly storm track. Lookout Pass and Snowbowl could see 2 – 4”. Temps will continue to be well below seasonal averages.

High-pressure to the west on Wednesday will be triggering an active NW flow aloft that will keep snow showers and below average temps in the forecast through Thursday, especially for the mountains along and north of the I-90 corridor where a trace to 3” is possible. A slightly stronger wave on Thursday night into the day of Friday looks to track into N/NW Montana with 2 – 4” likely in a line from Lookout to Turner to Whitefish.

East of the Continental Divide:

Below: Powder days have been plentiful at Big Sky since opening less than 2 weeks ago. Add Monday to that list. Image/Big Sky Resort 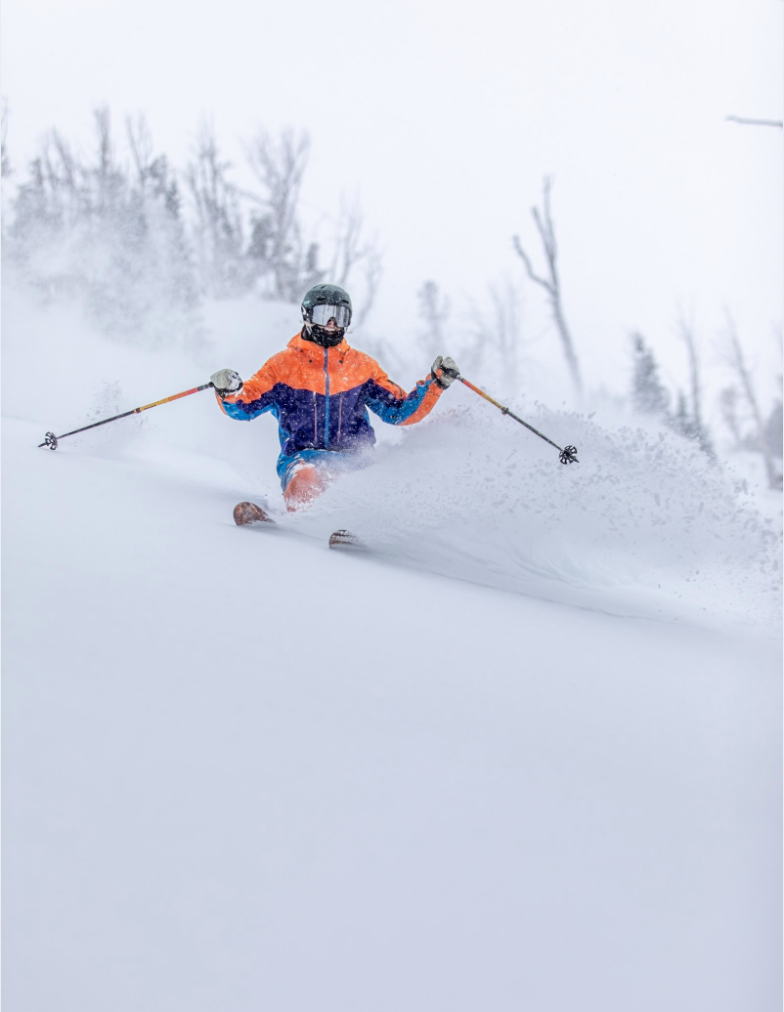 The system that dropped moderate accumulations Sunday night into Monday morning across SW Montana (Big Sky, Bridger) will move in a N/NE direction bringing periods of snow across the North Central mountains where Showdown could see 1 – 3” by Monday evening. Colder on Monday with highs in the low to middle teens at 8000’.

Accumulations begin late Monday night and continue through the day on Tuesday for these northerly locations with storm totals of 4 – 7” possible at Showdown and Teton Pass Ski Area, with 2 – 4” possible at Great Divide. Clouds and flurries with a skiff Tuesday at Bridger and Big Sky. High temps Tuesday at 8000’ will range in the low teens across the northerly tier with upper teens at Big Sky and across SW Montana. Just a note that south of the frontal boundary moderate SW winds will develop at Big Sky with gusts to 30 mph contributing to a very cold chill factor.

A weak ridge of high-pressure will bring a mix of sun and clouds for Wednesday and Thursday with continuing breezy SW winds across the resorts and areas of SW Montana. Temps will be moderating slowly but will generally be below the seasonal average.

A shortwave storm system is favored to move over the Divide during the day on Friday with increasing clouds and snow showers developing across mainly SW Montana. This system will also usher in another cold shot of Canadian air.

West and East of the Continental Divide:

For the upcoming weekend and into next Monday, the models are somewhat agreeing on an active weather pattern across the Northern Rockies with continued accumulating snow possible. However, each model has different scenarios:

The GFS brings a Pacific low inland where it splits and the eastern cut-off low slams SW Montana (hello Big Sky, Bridger). Overall, this would be the best scenario.

The Euro brings the Pacific low inland with a track through southern BC clipping NW Montana on Saturday with a weak secondary low on Sunday tracking across SW Montana.

And the Canadian model slows the progression of the Pacific low, bringing it into the Northern Rockies on Sunday with the main energy moving through Idaho with remnants for Montana. Areas along and south of I-90 favored.

Beyond Monday, next week looks to remain active as another Pacific storm system appears to throw several disturbances into the Northern Rockies through the following Friday.

Thanks for tuning in, my next update will be on Wednesday,12/7.