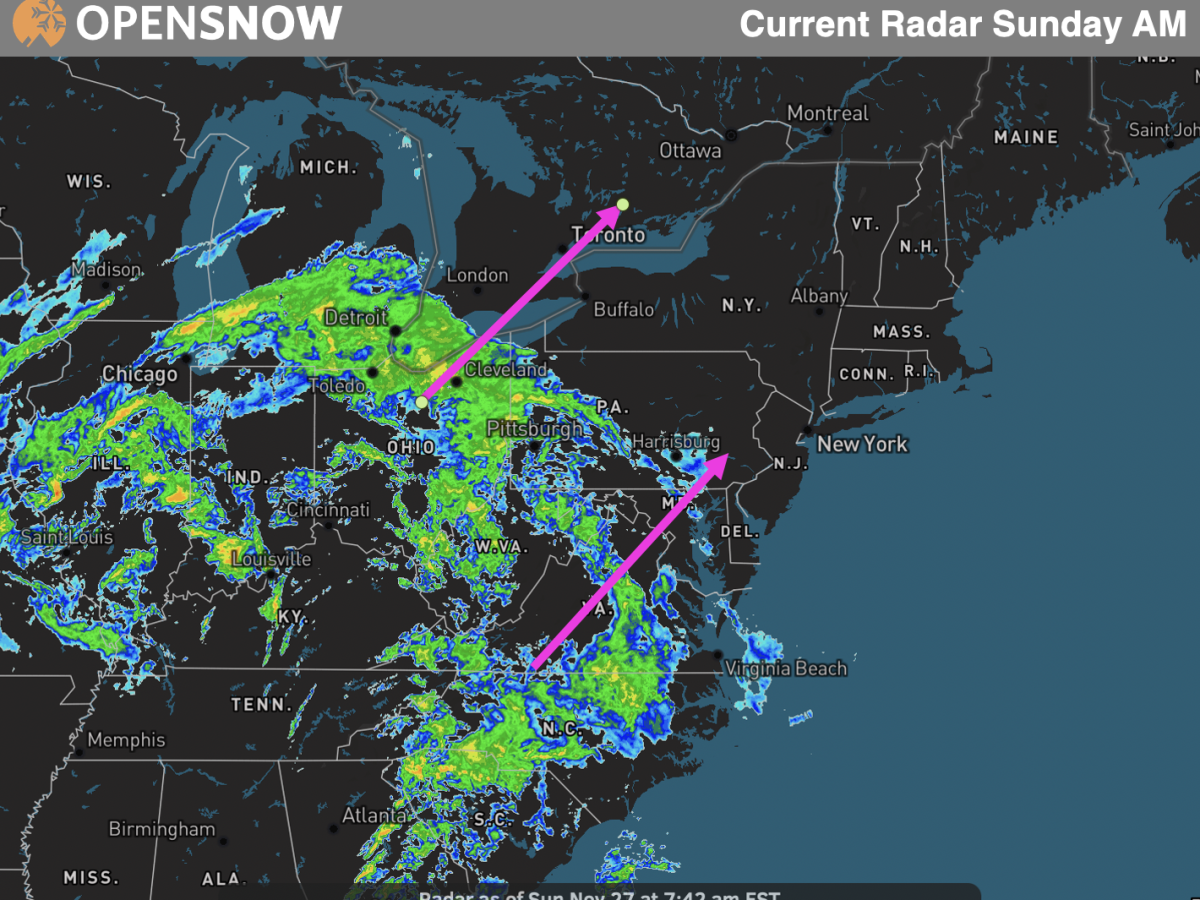 Rain moves in on Sunday with a brief shot at upslopes snow showers on Monday morning. Another good bout of rain is expected on Wednesday with more robust upslope snows into Thursday. 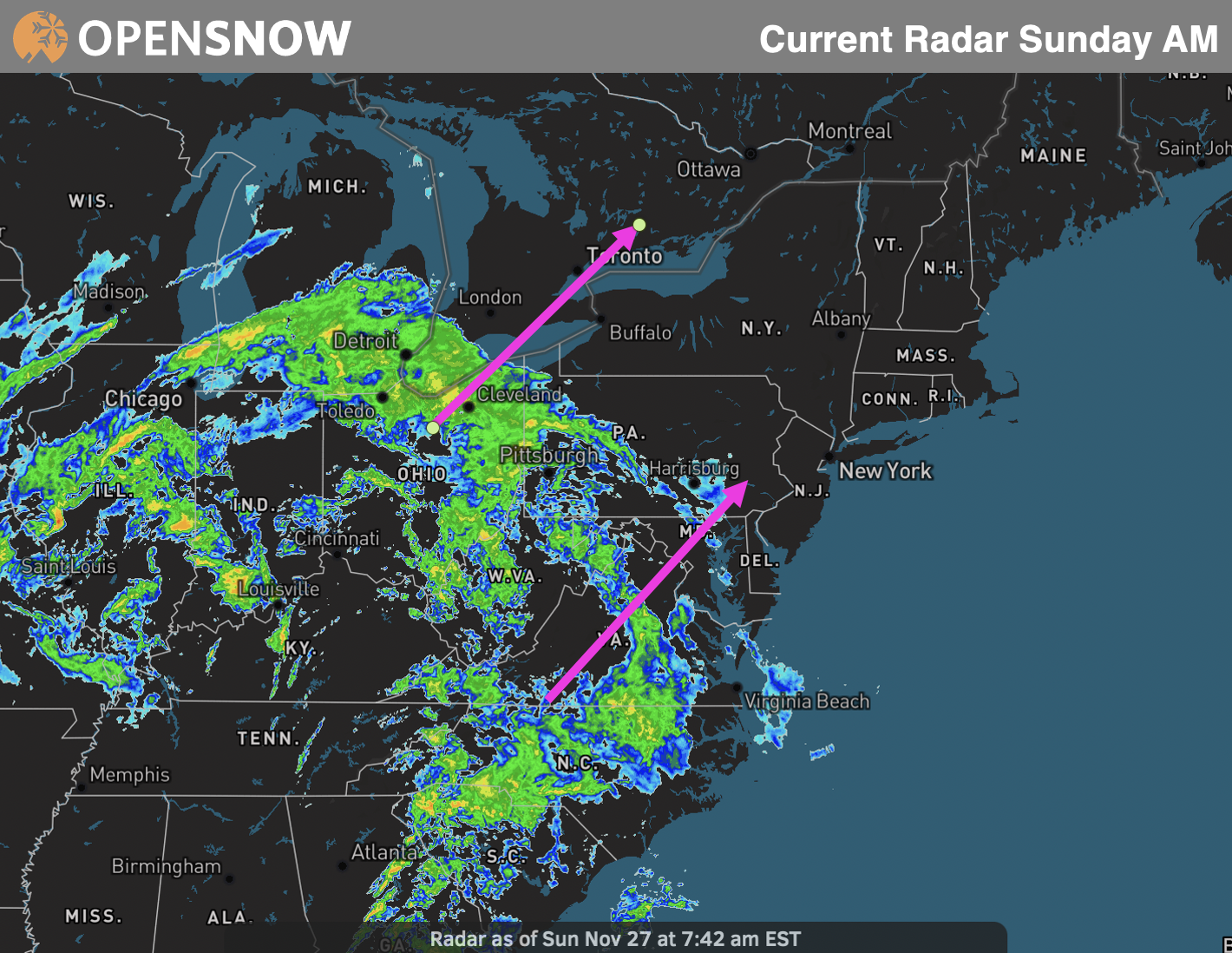 NAM model forecast for 7AM Sunday through 1AM Monday.

With temperatures above freezing already on Sunday morning, any precipitation that falls on Sunday afternoon into Sunday night should fall as rain. Rain arrives across the Adirondacks and Southern Greens by ~4PM and overspreads the rest of the region overnight ending after midnight as low pressure tracks across New York and into the Gulf of Maine. Anywhere from 0.5 to 1" of rainfall is expected. Warm temperatures and rainfall should unfortunately soften conditions across the slopes.

NAM model forecast for 4AM to 10 AM on Monday.

Cold air should filter back into New England as the Sunday night as the storm pulls away into the Canadian Maritimes on Monday. A brief period of upslope snow and rain showers will develop in the Adirondacks and northern Green on Monday. Optimistically, 1" of new snow may fall in the higher terrain; our forecasts have 0-1" at Jay Peak and over in Tuckerman and that's about it. Temperatures remain below freezing through early Wednesday morning increasing odds that some resorts may continue to blow snow ahead of our next rain event to maintain coverage.

ECMWF model forecast for 7AM Wednesday through 1AM Thursday.

Our next shot of snow is not until Thursday, but it comes on the backside of another beast of a rainstorm on Wednesday. The storm track continues to favor large storms moving to our west or north pulling warm air into the region. Once the rain passes on Wednesday, cold air will dive back into the region pushing temperatures back into the 10s and 20s with a good signal for lake-moisture enhanced upslope snows across the Adirondacks, Greens, and Whites. Most forecast models are pointing toward 1-4" of new snow in the mountains on Thursday. 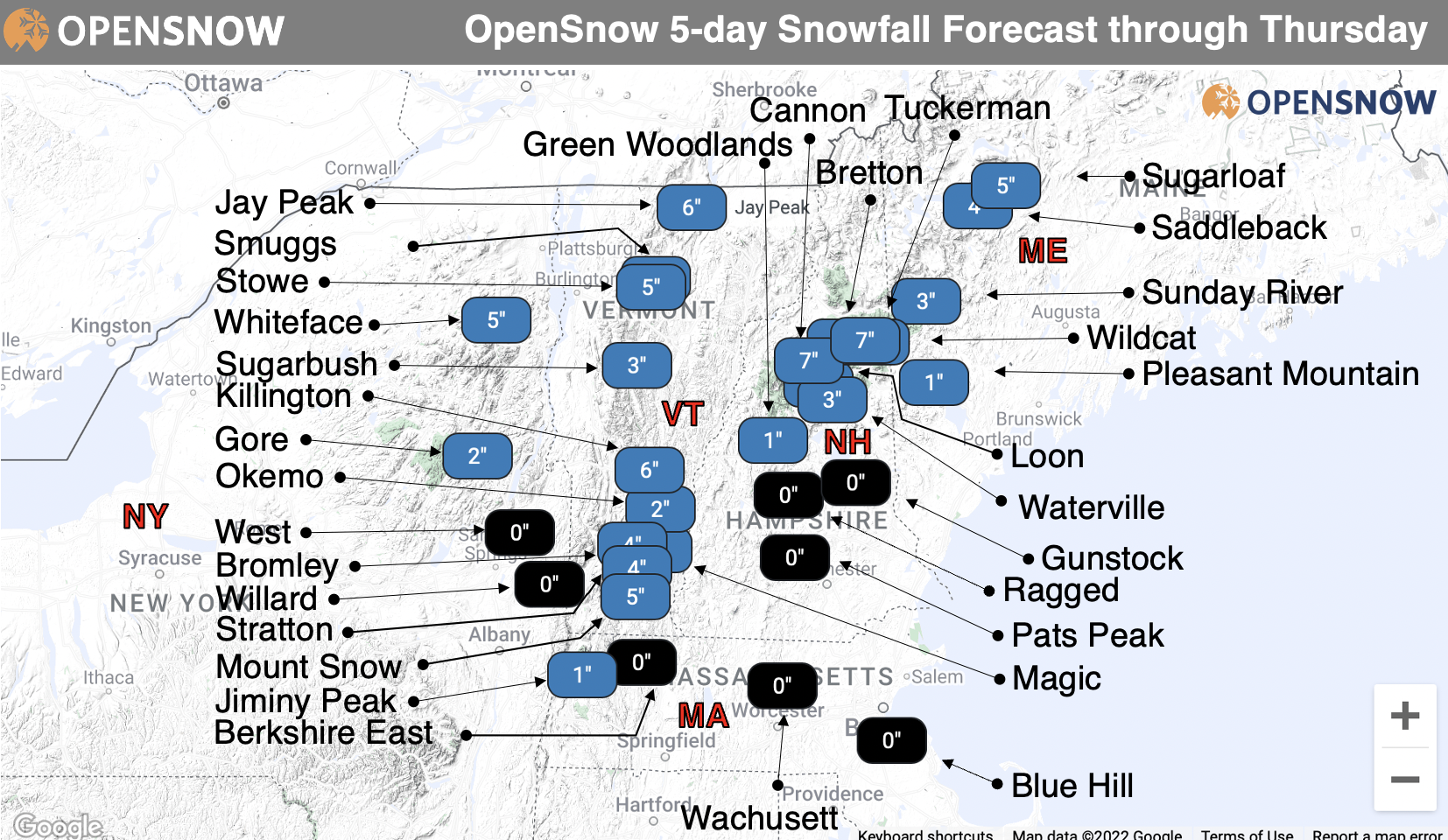 Our OpenSnow blended forecast paints 3-5" of new snow through Thursday. Some of these forecast totals have some ~1" amounts from Monday and some ~1-2" amounts carrying into Thursday night. A bulk of these totals do fall on Wednesday night and Thursday.

The New England Daily Snow will be back on Monday morning will a full forecast, including a look into next weekend and beyond.