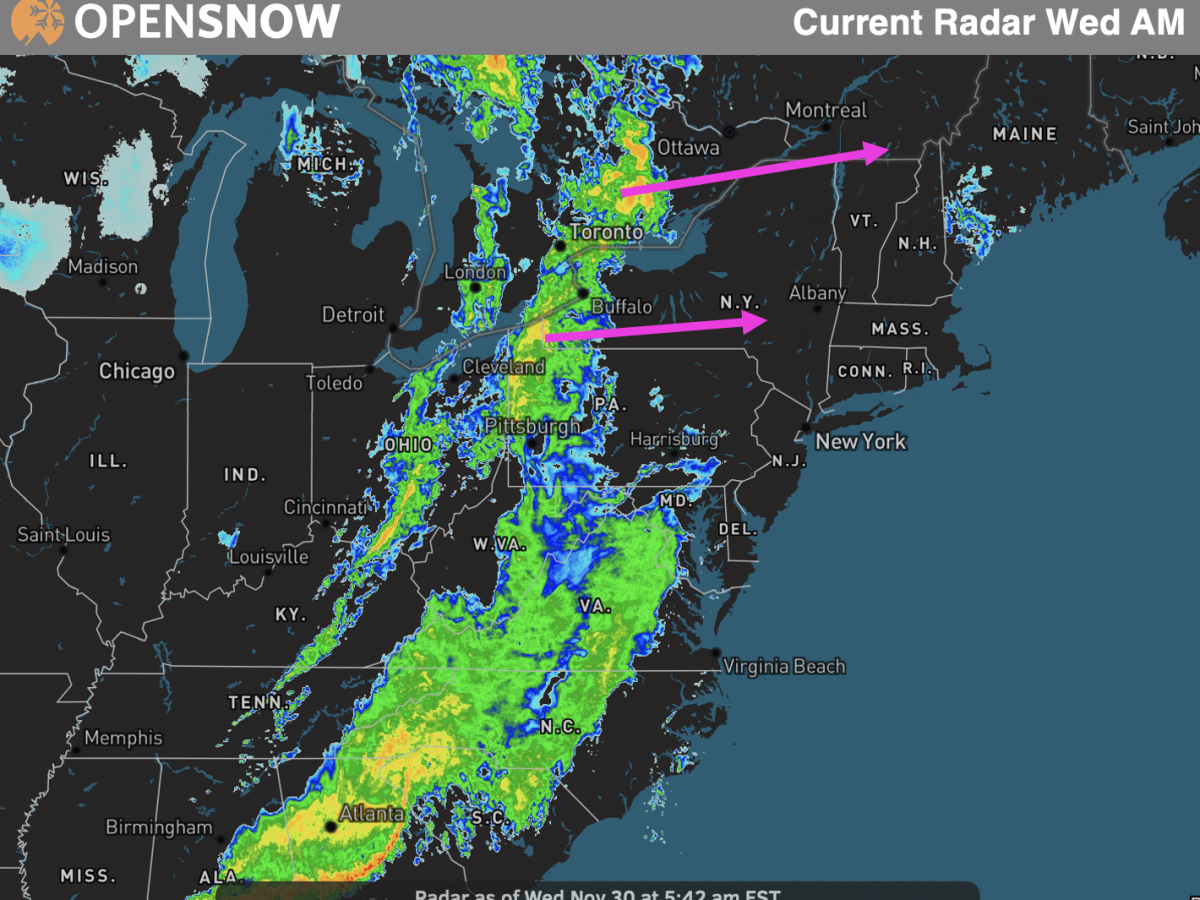 More rain is in the cards on Wednesday with some upslope and scattered snow showers likely on Thursday. Another rain event is in the forecast for Saturday. Are we having fun yet? 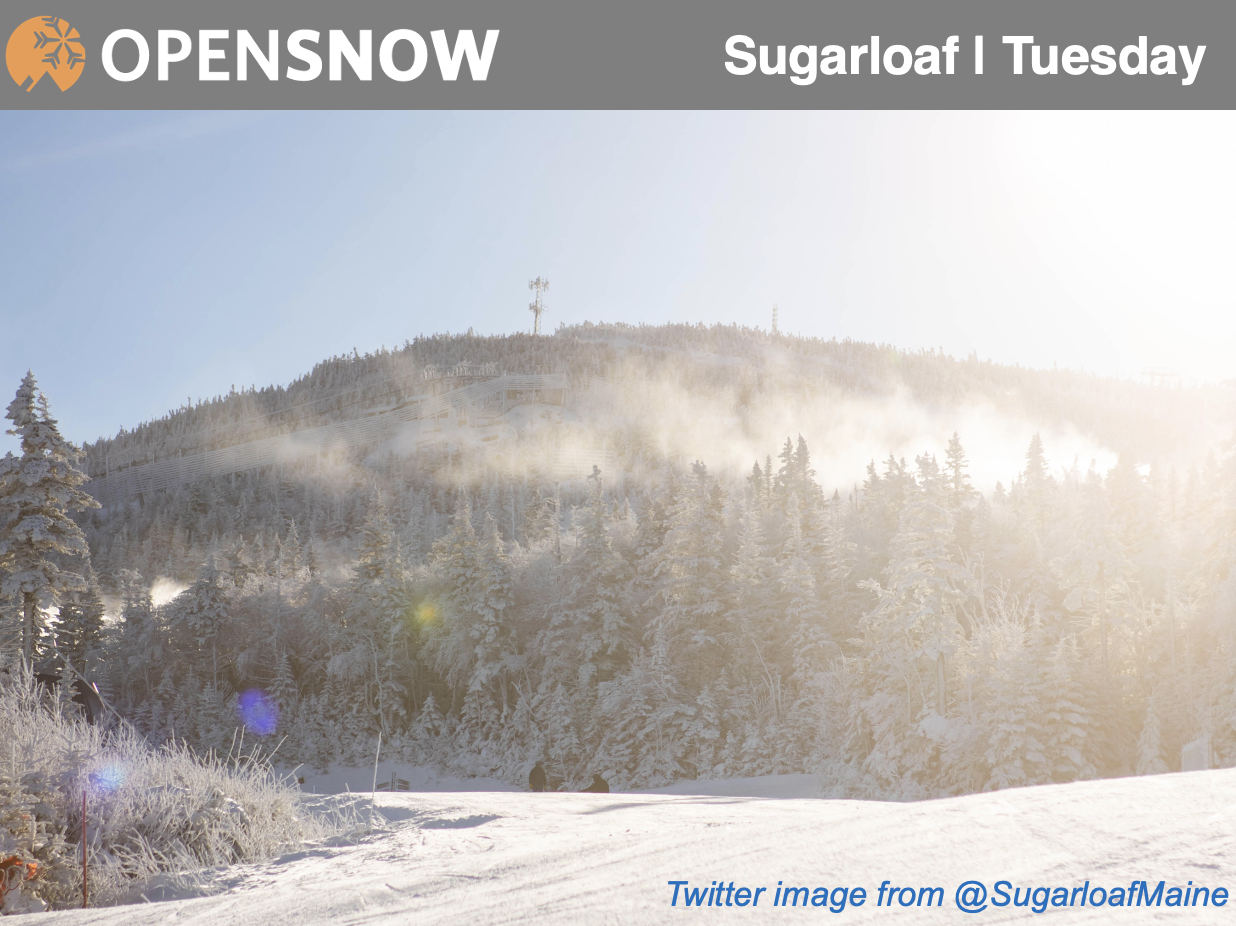 Several resorts took advantage of the cooler weather on Tuesday to make snow in advance of our next storm arriving on Wednesday. This storm will bring strong southerly winds, warm temperatures, and rain on Wednesday followed by a transition to strong west-northwest winds and some snow into Thursday. Details below. 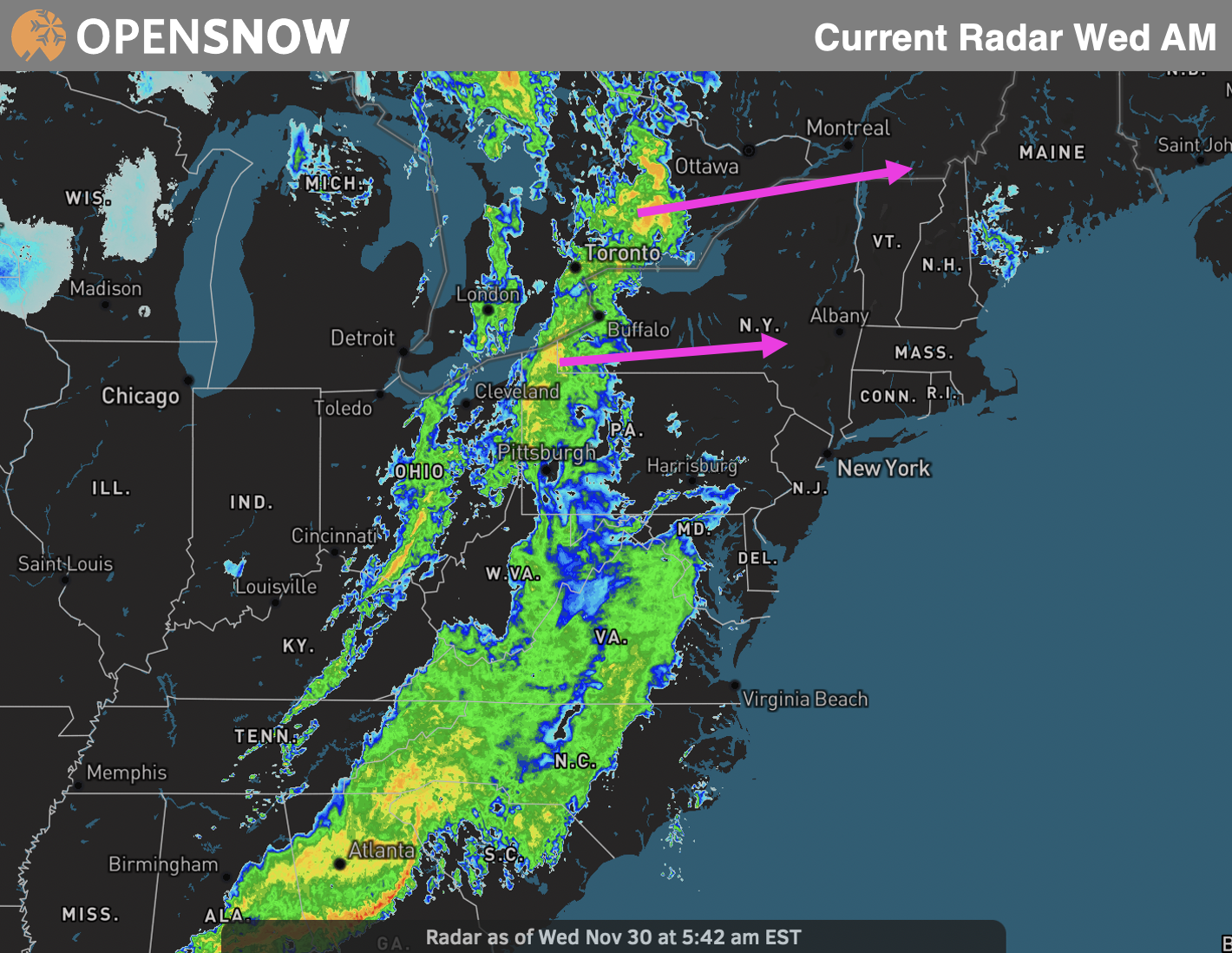 The Wednesday morning radar shows the edge of precipitation marching from west to east across western New York as of 5:45AM with some light rain and snow showers over western Maine. The bulk of the precipitation will arrive into the Adirondacks later on Wednesday morning and cross New England around lunchtime. The timing is nicely captured by the NAM model forecast below.

NAM model forecast animation for 7AM Wednesday through 1AM Thursday. Rain. Ugh.

A bulk of the precipitation falls between 1PM and 9PM in New England and will mostly fall as rain. Rainfall amounts of at least 0.5" and as much as 1" are likely especially in the Whites where south facing mountain slopes will wring out a bit more orographic precipitation. The ski slopes that have snow can likely handle 0.5" of rain, especially on machine made snow. Temperatures and dewpoint temperatures will spike into the 40s on a strong southerly wind that could exacerbate some melting on the fringes. If any slopes looked terrible on Tuesday, they are going to look even worse by Wednesday night. 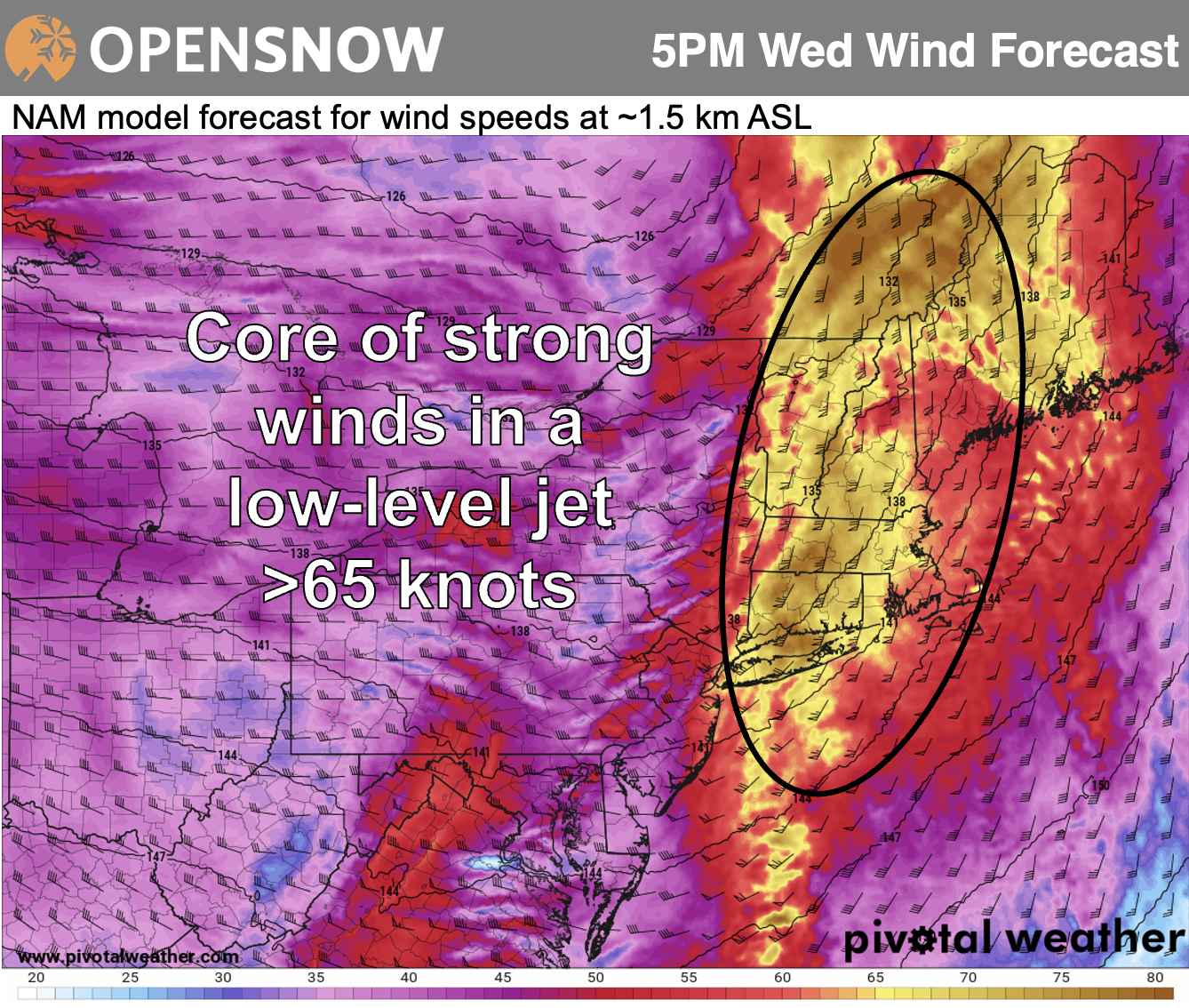 The big story out of this storm is likely going to be the winds. Wind gusts on the upper slopes and summits are going to crank above 70 mph with gusts possible over 90 mph. The core of strongest southerly winds cross New England throughout the afternoon. It's going to be dreadfully rainy, but if resorts do open there will likely be wind holds as winds ramp this afternoon.

Over at Killington we have wind speed forecasts of south-southeast near 60 mph with gusts over 100 mph. It's been a while since I've seen the OpenSnow forecast go for triple digits on gusts. In my opinion, these are likely "highest possible" wind gusts and the actual wind gusts are usually ~20% lower.

NAM model forecast animation for 1AM to 7PM on Thursday.

Rain will eventually go over to upslope snows on the backside of the storm on Wednesday night with some accumulation possible in the northern Greens and on the north slope of the Whites. Temperatures will drop quickly with gusty west-north winds; first-chair temperatures on Thursday will be in the teens on the slopes. A bulk of the Thursday snows will arrive late morning through midday with the passage of the upper level trough aloft and will likely trigger some snow squalls and localized heavier snow showers across the North Country.

Snowfall on Thursday will be localized to the lake-effect belts in New York and the high terrain in Vermont and New Hampshire. Some of the lake-effect moisture will spill into the Adirondacks and favor some accumulations of 1-2" at Whiteface and Gore, otherwise upslope snows of 1-2" are possible at Killington, Stowe, and Jay. The deepest snows will be above 4000 feet in the Whites where we have 3-6" at Tuckerman. The NAM high-resolution model in the animation above favors some higher totals in the Greens (10" at Killington), but it is usually an outlier on the upside. Colder temperatures will at least support more snow-making activities region wide through Friday ahead of our next storm.

ECMWF model forecast for 7AM Saturday through 1AM Sunday.

Our next storm arrives on Saturday, and you guess it, another rain event. A large region of low pressure will cross southern Canada near Hudson Bay this weekend and drag a cold front across New England. Rain ahead of this cold front will overspread New England in the morning hours and likely continue into the evening. Cold air will rush into the backside of the storm with some upslope snows possible Saturday night. Rainfall totals will be lower with this system and backside snows will be limited.

A note about the snowfall totals. The OpenSnow forecast actually has ~3-6" snowfall amounts for the second half of the day on Saturday. I'm not buying it. Here is what I think is happening. Take a six-hour period where there is precipitation (rain) during the first hour, then dry for the next five and temperatures that are 38F in the first hour, then dropping to 20F by sixth hour. The model will say that six-hour period as a whole was cold enough for snow and assign that first-hour precipitation (rain) incorrectly as snow. I think the models are spoofing us. We'll see, but I'm take the under for now. 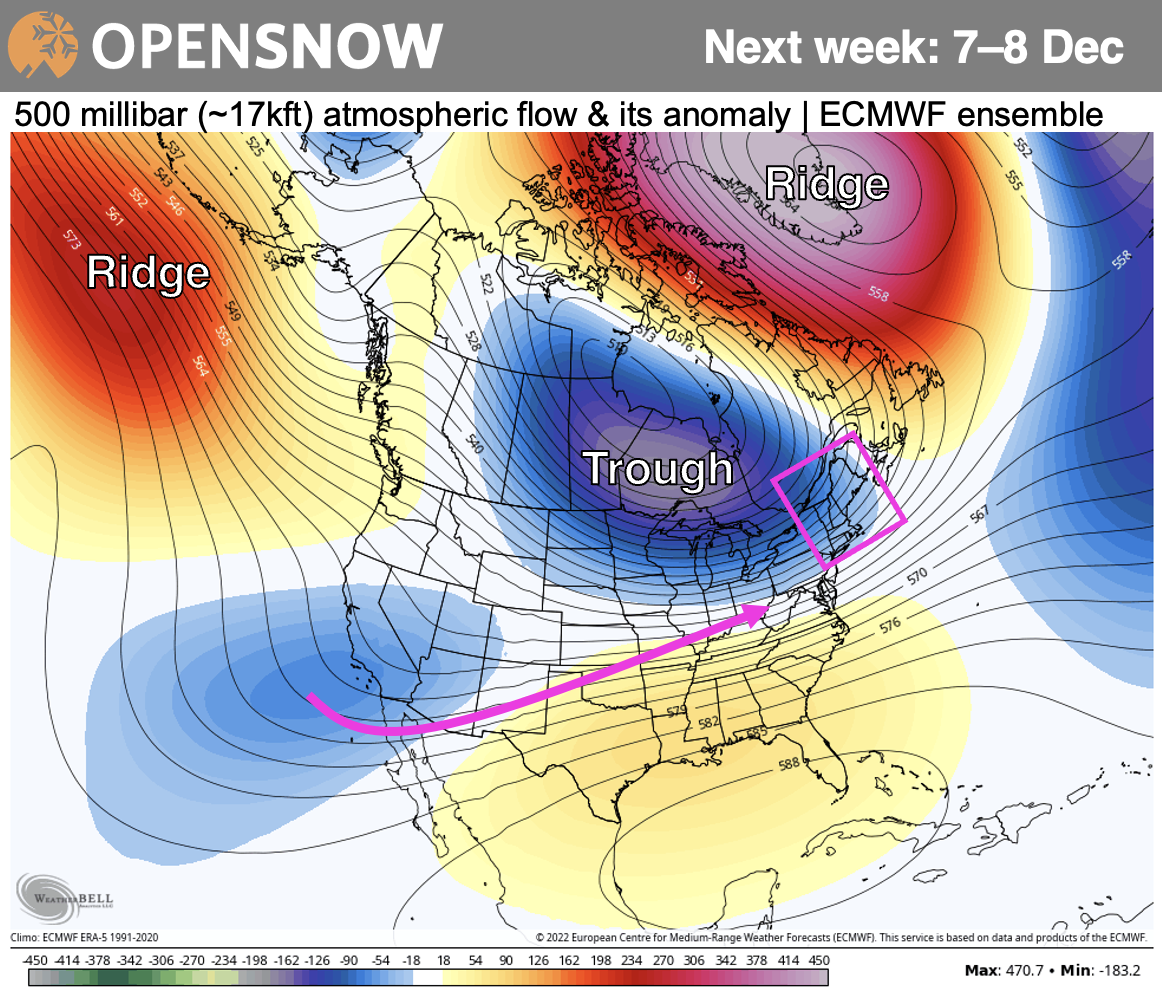 ECMWF ensemble analysis of the upper-atmospheric flow and its departure from climatology for next week (Wednesday and Thursday) on 7-8 December.

Our next shot at precipitation won't be until around next Wednesday (Dec 7) as the pattern slowly changes to favor a trough of cold air over the Great Lakes region with a storm track to our south. I'll break down those details in my next Daily Snow on Friday.