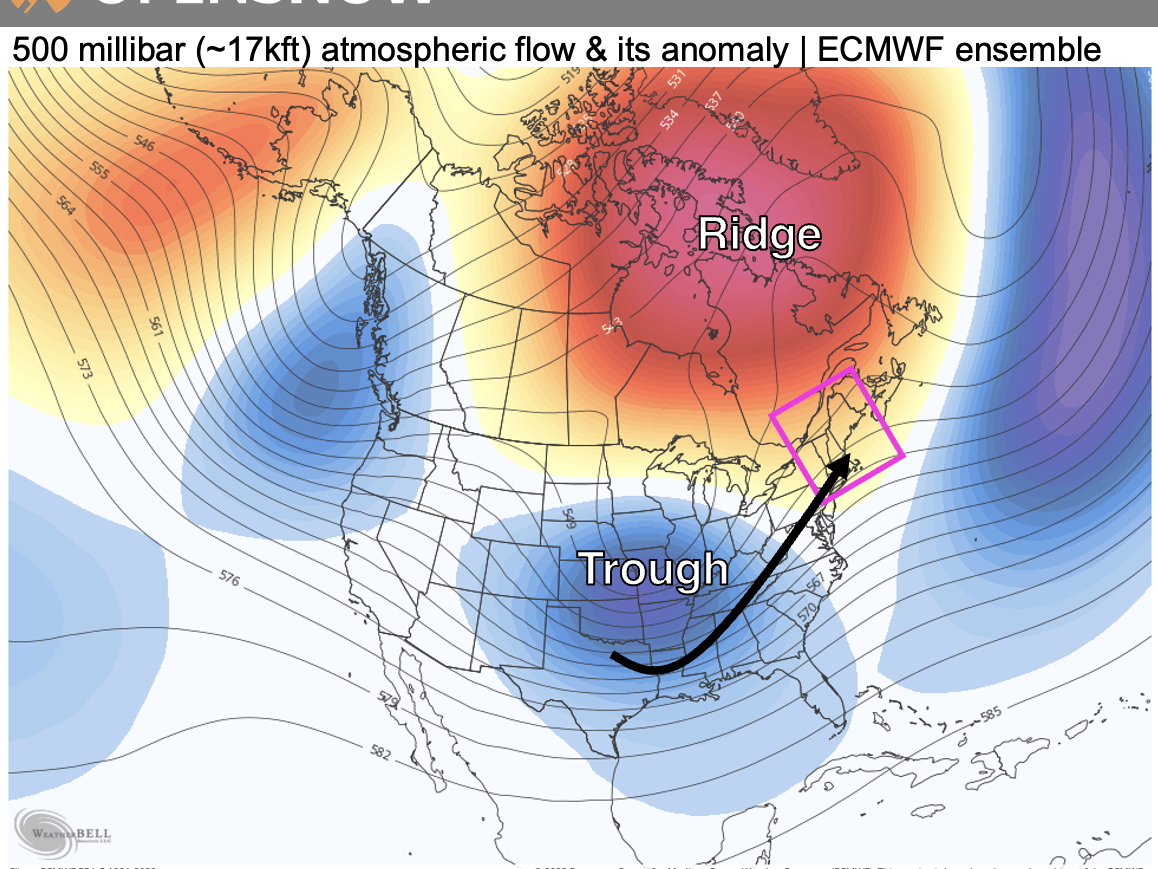 Another rain storm is on our doorstep this week for Tuesday and Wednesday with temperatures warming into the 40s. Models are then uncertain about a storm for the weekend, but are trending colder and snowier into next week. 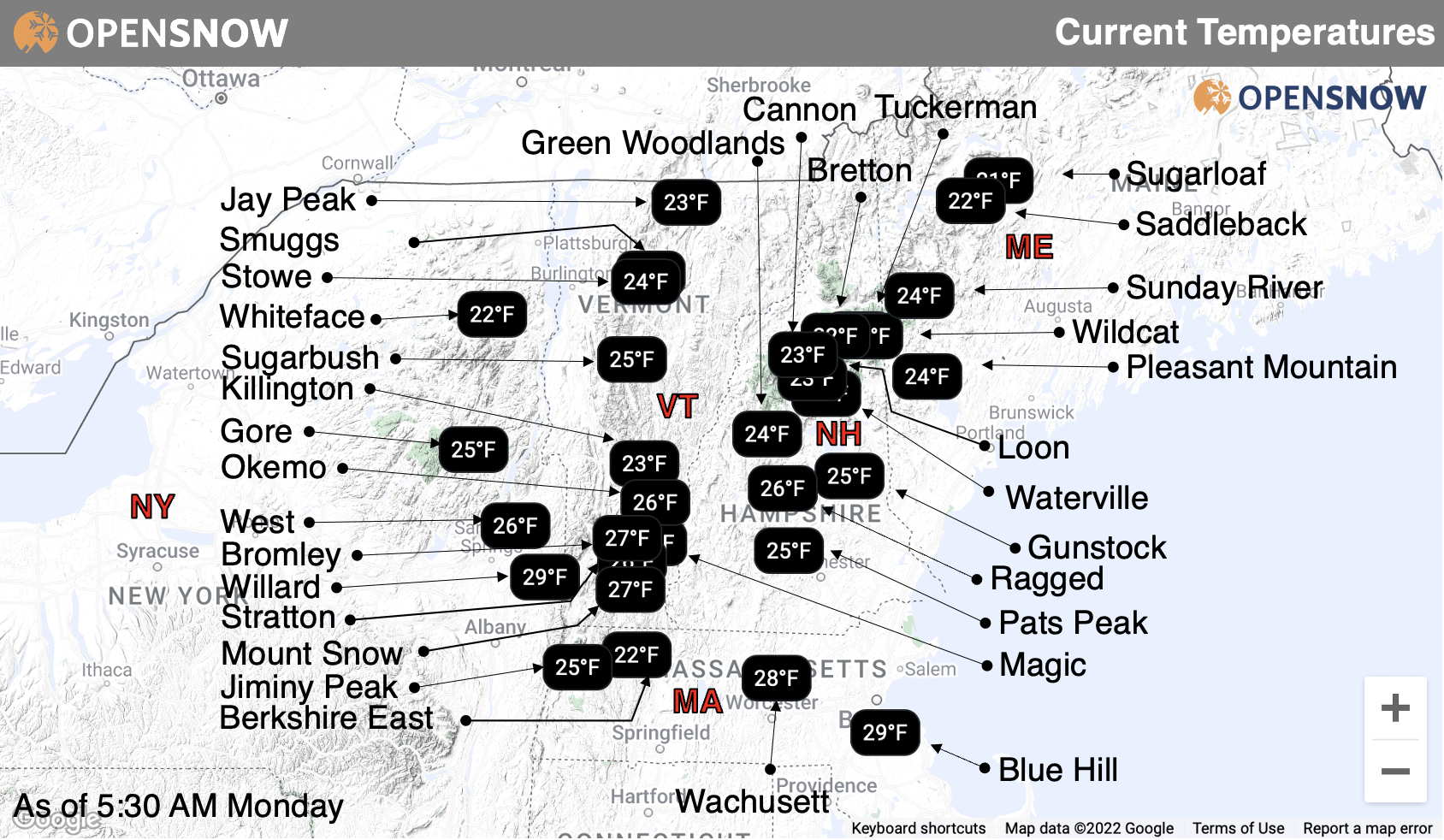 The snow stakes and the skies remain clear on Monday morning with temperatures down in the 20s across much of New England. Dry weather will prevail throughout the day as temperatures climb to near 30F across the region. Winds are calm in the valleys to start with a bit a breeze on the peaks. Expect that breeze to hit the bases as the sun mixes out the low-level temperatures inversions.

NAM model forecast for 9AM Tuesday through 1PM Wednesday.

Rain showers return to the region on Tuesday as a slow and disorganized region of low pressure passes. Showers arrive midday and persist through Wednesday evening totaling ~0.75" to 1.00" of liquid. The definition of crud. Temperatures will climb into the upper 30s and low 40s with a breezy 20-30 mph south-southeast wind on the slopes.

We have temperatures increasing above 32F at Killington at 4AM on Tuesday and not dropping back below freezing until 8AM on Thursday (52 hours) with a freezing level that should push well up above 6000 feet. Not great, Bob.

There is a surprising and hilarious amount of model spread between the ECMWF and GFS deterministic models from the Monday morning runs for the weather this weekend, starting on Friday.

Usually when there is this much spread in the deterministic models, one of them is out to lunch. A look at their respective ensembles shows that the GFS ensemble has a surprising number of members (>30-40%) holding on to precipitation (here rain or snow totaling >0.1" of liquid in 24 hours). The ECMWF ensemble is <10%.

Why the difference? I've scoured some of the forecast model data and all the models look fairly similar through about Thursday night. The key difference in the models appears to be a region of high pressure over Canada that the GFS has far up over Eastern Canada and the ECMWF has tucked between the Great Lakes and Hudson Bay. The more southerly location of the high in the ECMWF shunts storms south toward the mid-Atlantic and keeps us dry. The differences arise right around hour 72 in the forecast (Wednesday night), so we'll have some closure (model consistency) here very soon. If not by lunch time today, likely be the end of the day. I'm leaning toward the ECMWF solution.

Model comparison for 7AM next Tuesday (Dec 13).

Regardless of what happens this weekend, the models are pointing toward another potential storm arriving on Monday and Tuesday next week (Dec 12-13), but with all the usual uncertainty for a 7-8-day forecast. The comparison between the two models above is like a game of "where are these images the same, where are they different?" They both have storms coming into the West Coast and they both have storms over the central U.S. The GFS is very wet and snowy into the West with a Great Lakes snowstorm, whereas the ECMWF spins up a coastal low for New England. 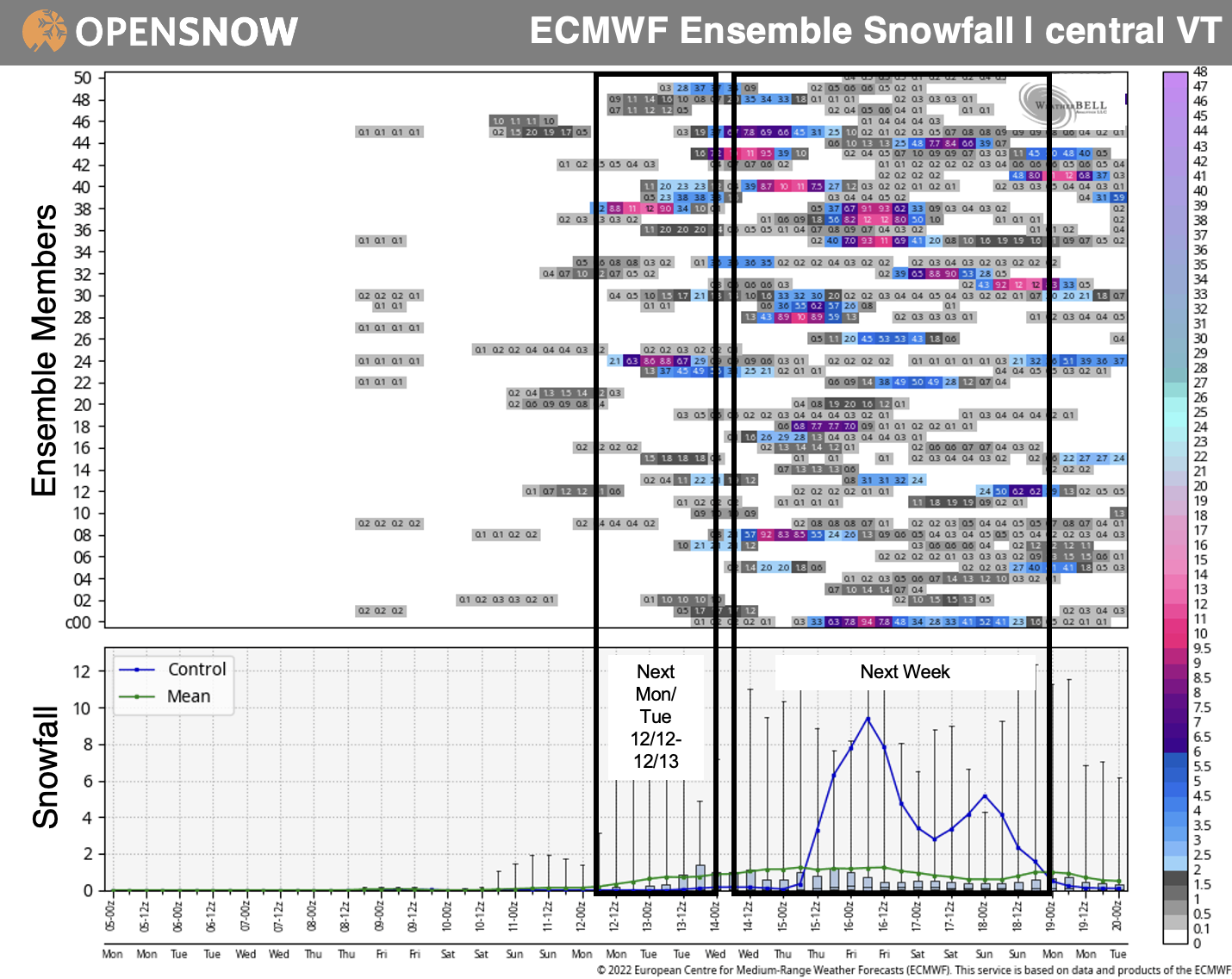 The ensembles do not provide is us with much more of an answer. The ECMWF ensemble has about 30% odds of snow with this set up next Monday/Tuesday, but has many more solutions with snow extending into next week. The GFS Is about the same (not shown). 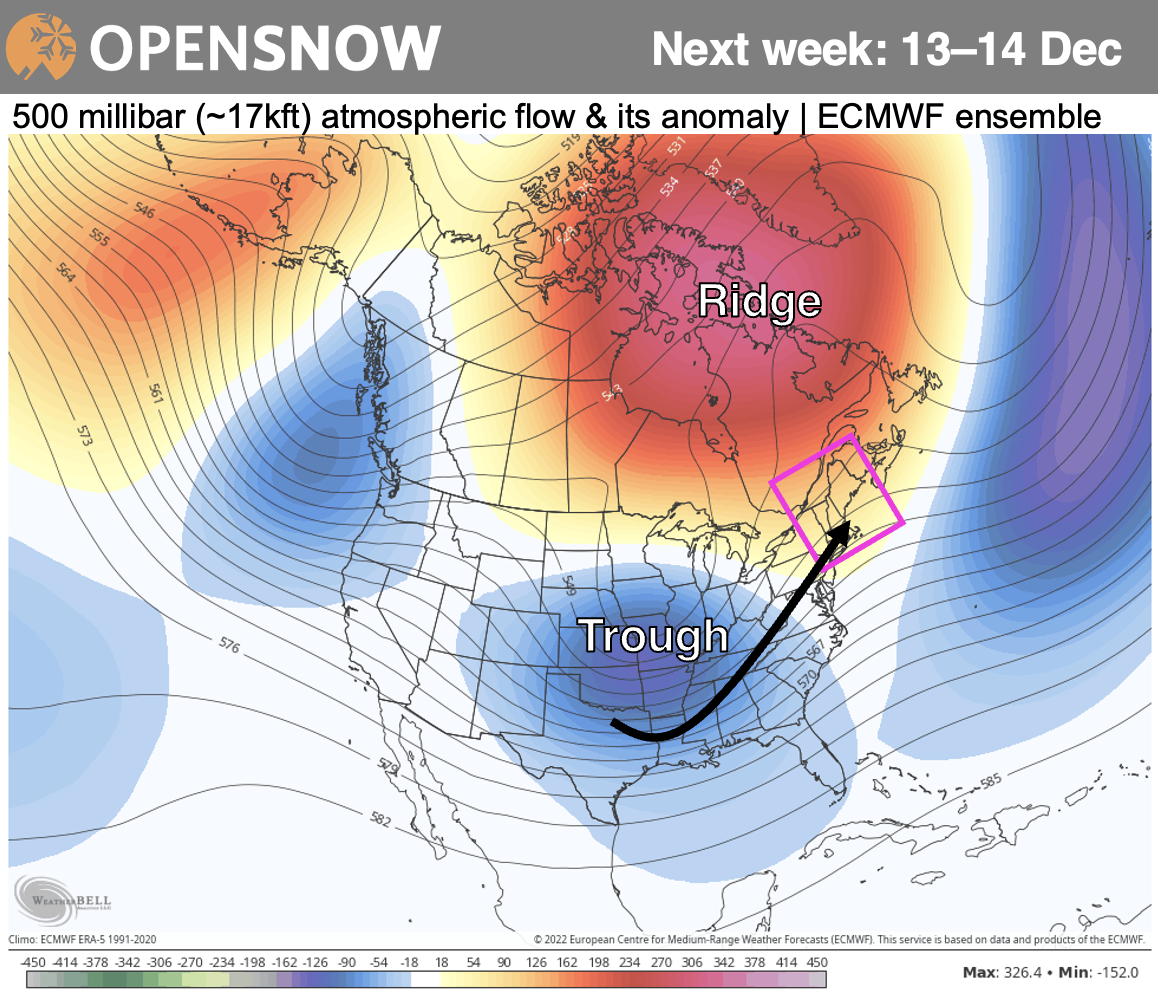 ECMWF ensemble mean map for the middle of next week.

While the details are uncertain, we may finally be turning the page into a snowy regime for the second half of the month. The Greenland Block that we have been watching over the last week or two will retrograde into northern Canada. This should be the impetus we need to push colder air into the U.S. favoring an East Coast storm track. A lot will depend on how it interacts with storms over the North Pacific, so cross your fingers.

The New England Daily Snow will mostly likely be updated agin on Wednesday. I may push an update on Tuesday if there is closure on a Friday-Saturday storm (or not).