The northern mountains could see very light accumulation by end of day Wednesday. Then from Saturday through Monday, we could see decent snowfall of 2-8+" in the high elevation Sangres. In this post, I also break down some of the season snowfall totals at different resorts this season compared to the previous two seasons.

On Tuesday a storm is spinning over the Great Basin of Nevada and this is triggering snow showers out ahead of the system in Utah and Colorado.

As we expected, this precipitation is missing New Mexico to the north as indicated in the radar on Tuesday afternoon.

Through Wednesday we could see a trace to an inch or so of snow at high elevations in the northern Sangres. 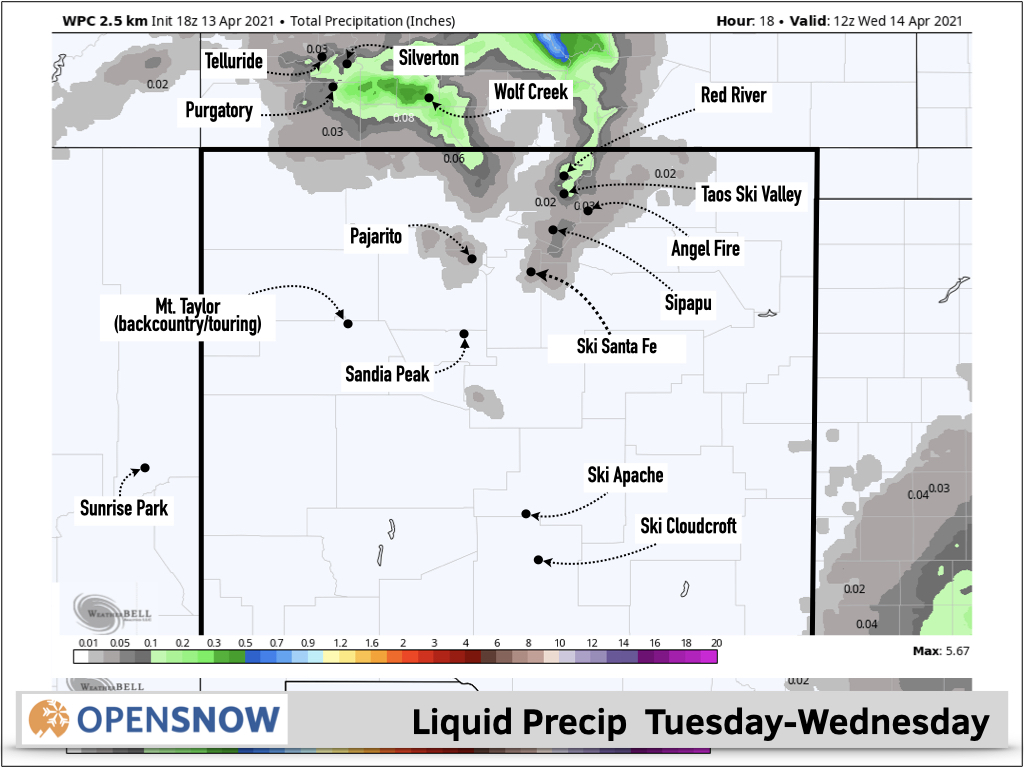 The second part of this storm system is slated to impact New Mexico on Saturday and Sunday and totals could be more robust. See the extended forecast below for more details.

As part of the season-wrap up, several readers asked about snowfall totals for different resorts. I compiled what I could based on data from resorts that track season totals, along with SNOTEL sensor data for resorts where there are stations within or adjacent to resorts. I also looked at totals for the 2018-2019 and 2019-2020 season where available for comparisons along with any other interesting tidbits:

Remember that snowfall totals in inches only tell part of the story. We like to focus on snowfall and snowpack depth, but actually looking at the Snow Water Equivalent (SWE), or how much liquid water is in the snow that falls over the course of a season, tells the other perhaps more important part of the story.

Looking ahead, Saturday and Sunday might be our last hurrah for any meaningful snow accumulation, at least for the remainder of April. You can never count out the potential for a late spring snow storm in May.

Here is the WPC liquid precip forecast for Saturday-Sunday. 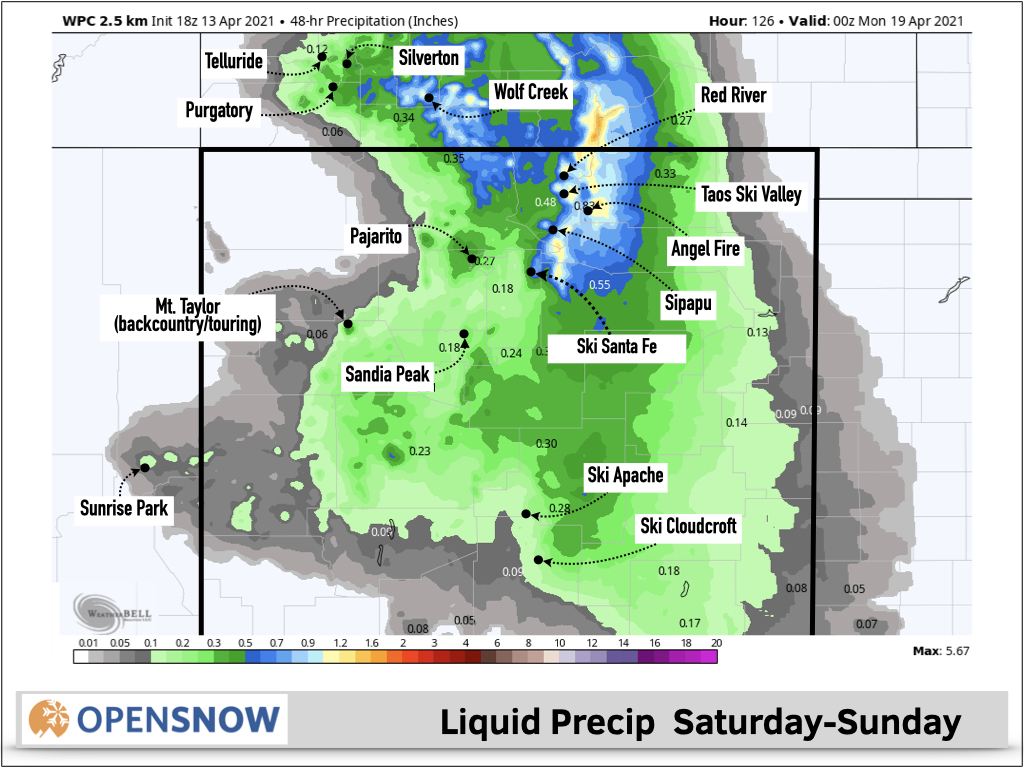 Here is the GFS Ensemble which is bullish for double digits in the Sangres between Friday and Monday. 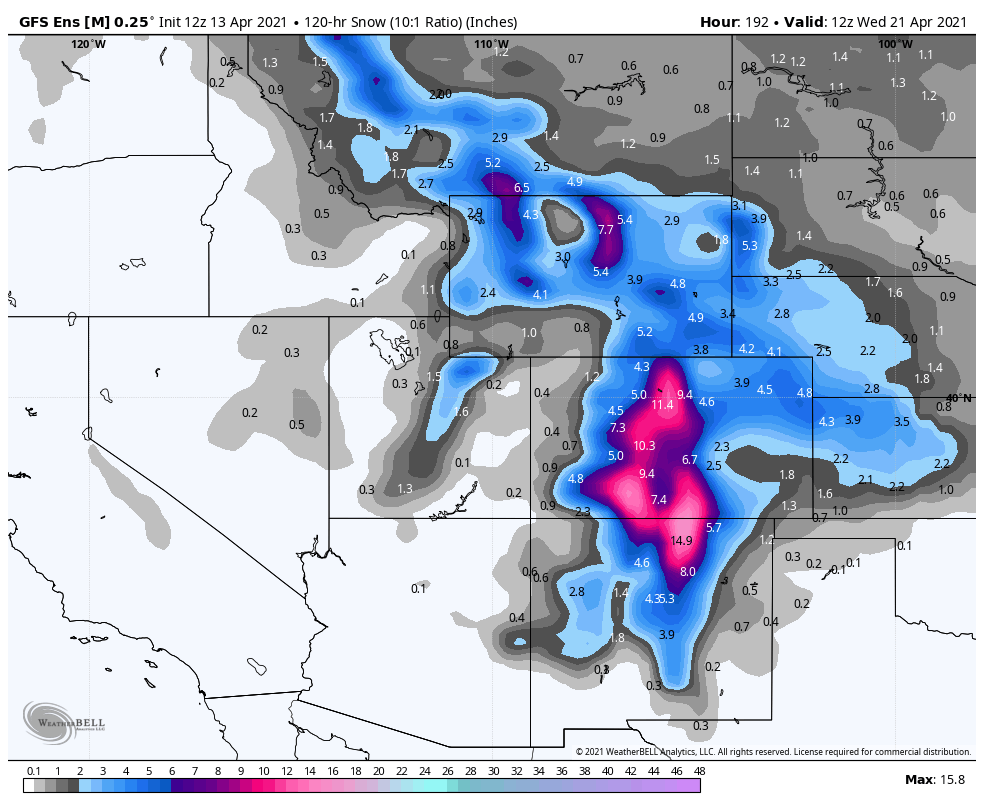 The European Ensemble is less on board with this scenario but still calls for 2-8" in the high country. 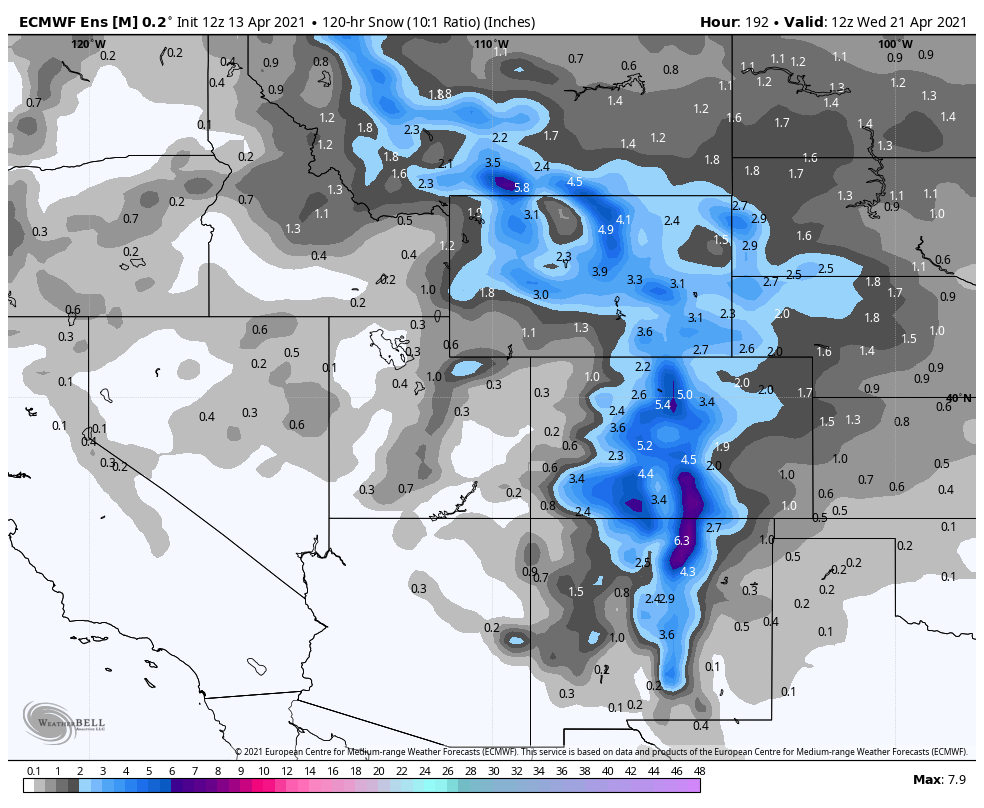 I will post a few more discussions of topics requested by readers this week, including a question about Ski Apache and snowfall trends over the past 20 years (is snowfall declining for the southern mountains over this time period?), and then a final wrap-up post looking at memorable storms and moments from the 2020-2021 season.

Not too late to hit me up with any topic/question requests.