- We could see a break Sunday during the day but cold with winds gusting to 40+ mph over the ridges. Then by Sunday evening, the next weak system could move in with snow showers Sunday night into Monday morning. This system could bring 1-2 inches to the east side of the lake, and 2-4 inches to the west side. It stays cold into Monday with ridgetop wind gusts increasing to 50+ mph. - A wetter system moves in Monday night into Tuesday morning. We could see 3-6 inches of snow on the east side of the lake, and 6-10 inches on the west side with this storm. Winds Tuesday could be gusting to 70+ mph over the ridges, likely closing some upper mountain lifts. - We could see a break Wednesday but it stays cold. Ridgetop winds gusting to 45+ mph. Highs in the 20s on the upper mountains and 30s at lake level. - A stronger storm is possible Wednesday night into Thursday night. If the current forecast holds we could see 1-2 feet of snow with this storm. - A drier pattern may begin to build in for MLK weekend and continue through the week of the 20th. That doesn't mean a weakened storm couldn't push in.

We are seeing some sun this morning with high clouds and cold temperatures in the 20s. We have our first storm moving in Sunday evening which we can see on satellite this morning diving in towards Northern CA. Then we have 2 more storms behind that Monday night and Wednesday night.

The Friday night into Saturday morning storm was another very weak system. We were only expecting a dusting to an inch on the east side of the lake, and 1-3 inches for the west side on the mountains. That's exactly what we saw, except for Kirkwood not getting to an inch. Here is the Keep Me Honest forecast vs actual variance report for the storm. 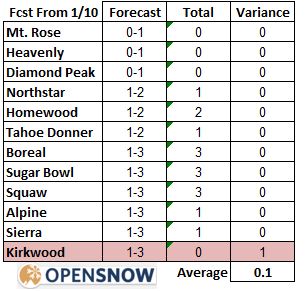 We have had a series over weak storms over the past week, and that is after a couple of weeks of drier weather over the holidays. Northwest of the lake the 5-day totals are 5-10 inches on the upper mountains which have brought a nice refresh to the slopes. The amounts east and south of the lake have been much less. 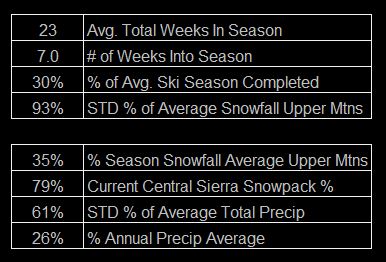 We have 3 more storms coming this week which will help to bring the numbers back up a little.

We have 3 storms coming over the next 4.5 days. We have 2 weaker storms Sunday night and Monday night, and then a stronger storm moving in Wednesday night. I'm going to summarize the temperatures, winds, & snow levels for the week, and then get into the snowfall.

The temperatures are easy. We are in a colder pattern through the end of the week. Highs into the 30s at lake level and 20s on the upper mountains.

The winds are going to be an issue at times throughout the week if you are trying to get in a powder day. We will see some strong winds on the upper mountains through the week that could close upper mountain lifts at times, especially at wind-exposed mountains.

For Sunday we have winds gusting to 40+ mph over the ridges this morning, but they should increase to 55+ mph this afternoon ahead of the next system pushing in. We see stronger winds overnight Sunday night that fall off some by Monday morning gusting to 50+ mph over the ridges. Then later Monday afternoon the winds come up fast and strong. The latest model runs show the 80+ mph winds holding off until right around when the ski resorts are closing.

Those winds are still gusting to 80+ mph Tuesday morning and could continue to gust to 70+ mph through Tuesday afternoon, likely closing some upper mountain lifts through the day. For Wednesday, the winds may be lighter in the morning only gusting to 30+ mph, but then increasing to 60+ mph later in the afternoon as the next storm approaches. Then for Thursday gusting to 80+ mph in the morning and possibly to 70+ through the afternoon.

This means that the two powdery days of Tuesday and Thursday we could also see the strongest winds. Which could mean there is still untouched snow up high for Wednesday and Friday mornings making them powder days as well.

For Sunday we will have some sun in the morning and then increasing clouds and winds in the afternoon. Then the first of the 3 systems moves in.

The first storm should move in during Sunday evening. But this system is similar to the Friday night - Saturday system We are on the southern edge with mainly orographically enhanced snow showers. The best chance again for snow showers Sunday night into Monday morning will be NW of the lake.

The models have a spread of 1-3 tenths of an inch of total precipitation on the high end, NW of the lake along the crest. The average is around 0.17 inches. 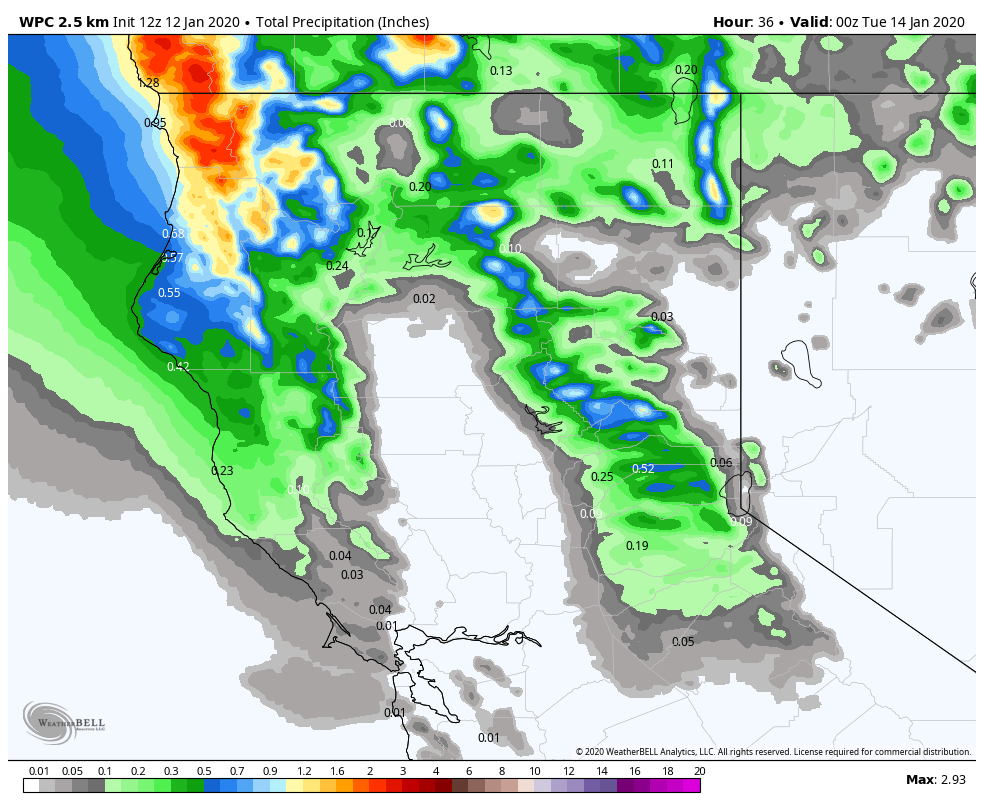 Luckily we have the higher snow ratios with these storms that will help to fluff up the snowfall even with meager precipitation amounts. The forecast is similar to the last two storms. A dusting to an inch for the east side of the lake and 1-3 inches for the west side. Highest amounts NW of the lake along the crest. South of the lake towards Bear Valley and Dodge Ridge the low end or east side amounts, and nothing for Mammoth. 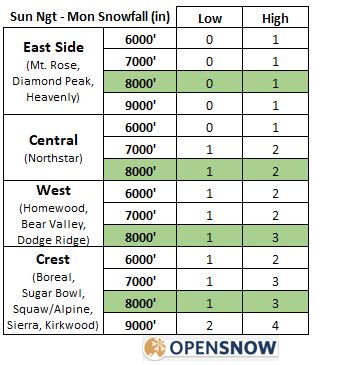 Expecting snow showers to wind down by midday Monday. We may see a few breaks of sun Monday afternoon, but the clouds increase again as the next system approaches for Monday evening.

The next weak system should move in Monday evening. We are expecting most of the snow to fall Monday night. With scattered snow showers lingering into Tuesday morning. We may see another break by Tuesday afternoon with some clearing.

The latest model runs continue to trend back towards a drier scenario with this storm. This one has been a headache as models were dry a few days ago, then trended very wet 2 days ago, and then they have been trending drier the past 48 hours. The latest spread on the models is for 3-6 tenths of an inch of total precipitation on the high-end NW of the lake along the crest, and lesser amounts to the south and east. The 100 model average is 0.35 inches.

Here is a look at the WPC model for total precipitation through Tuesday. 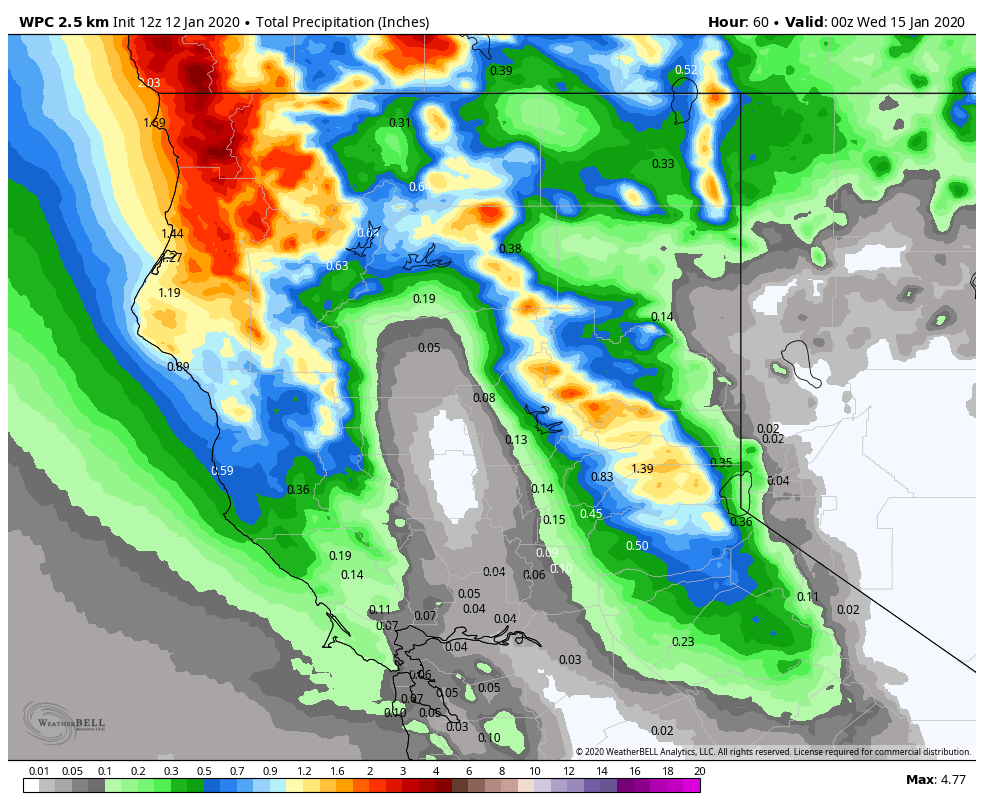 Again, we have high snow ratios helping to boost snowfall higher than with a normal storm with this amount of precip. Some of the wetter models like the NAM and German models show up to 6+ inches along the crest, but taking the average of all the models the high end is 5 inches this morning. 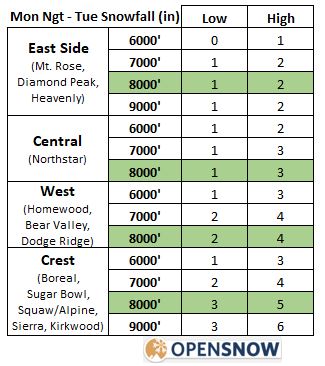 Once again, I would use the low end or even the east side forecast for Bear Valley & Dodge ridge to the south of the lake, with only up to an inch for Mammoth. These storms continue to hit hardest NW of the lake and fade quickly farther south.

We should see a break in the action Tuesday night into Wednesday. Wednesday morning could be the nicest weather of the period. Then increasing clouds and winds Wednesday afternoon ahead of the 3rd and strongest storm. Some models show light snow showers as early as Wednesday afternoon, but most of the snow should hold off until Wednesday evening.

This storm we have been watching for 2 weeks. It doesn't look as strong as we had hoped, but it is still the strongest of the series and the coldest. We have only had one storm bring 2 feet of snow so far this season, back on 12/1-12/2. This would be the first storm since then to have a chance to bring 1-2 feet. This storm does dig down farther off the coast pulling in much more moisture than we have been seeing, and pushes farther south through CA. 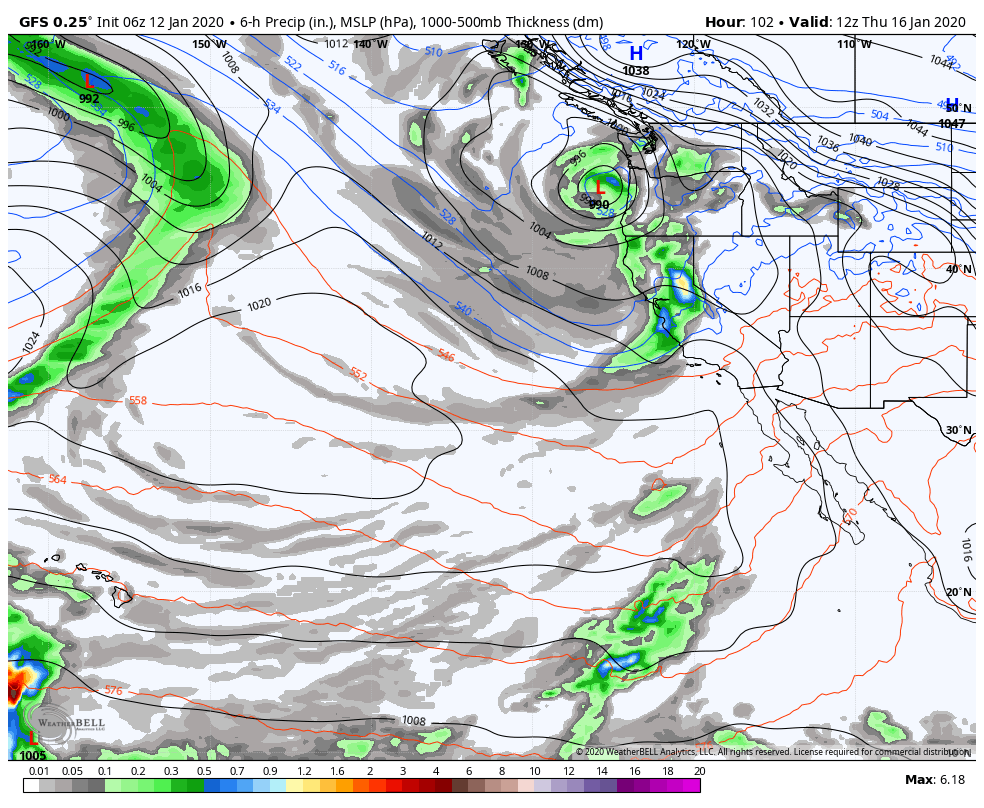 We should see the heaviest snow after midnight Wednesday night into Thursday morning. Then snow showers could continue behind the front into Thursday night before clearing out by Friday morning. There is a big range among the models with total precipitation forecasts. The latest model range is between 1 to 2 inches of total precipitation along the crest. The total model average is around 1.25 inches.

Here is a look at the WPC models total precipitation forecast through Thursday night. You can see the precipitation spreading much farther south. 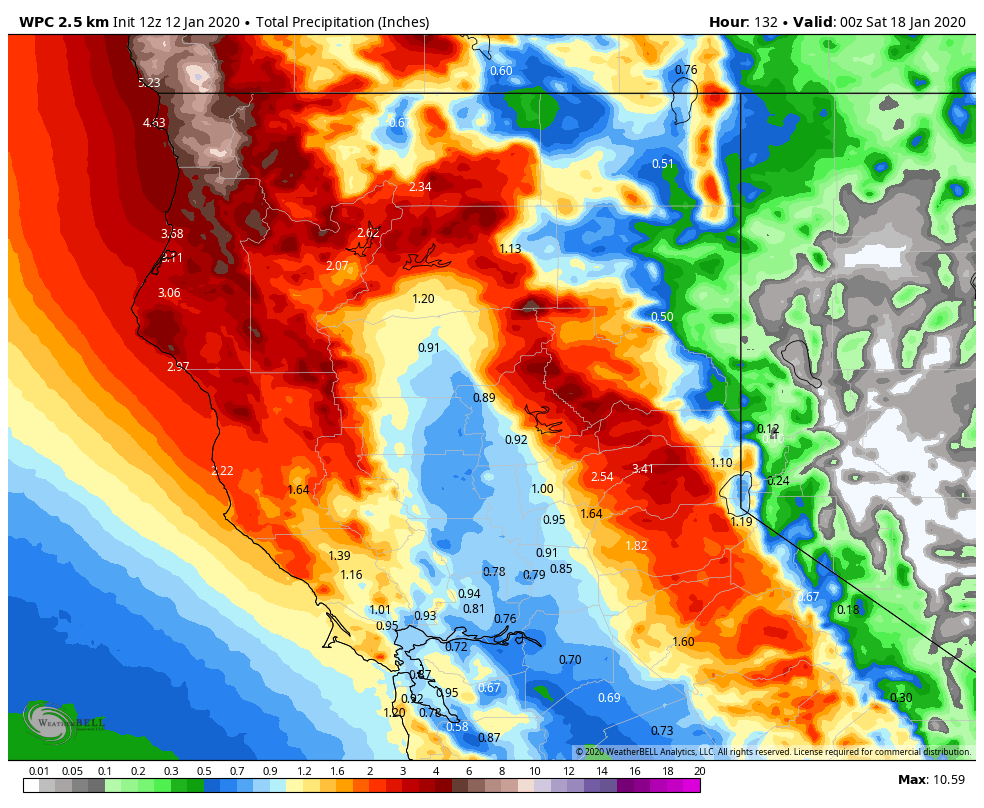 The good news will be the very high snow ratios with this storm. Normally you would need at least 2 inches of total precipitation to get to 2 feet, but we could get there with less with this storm. Here is the initial snowfall forecast for this storm showing 1-2 feet for the upper mountains, and 5-18 inches for lake level. 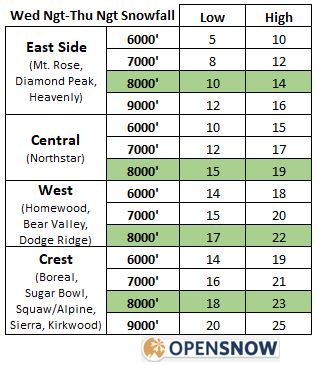 We have a few more days to fine-tune the forecast. By the time the sun comes out and winds die down on Friday, we should have good mid-winter conditions on the mountains going into the holiday weekend.

For MLK weekend we are in a transitionary period between two patterns. The trough that has been sitting over the West is lifting out and high pressure is beginning to build in. There is another storm that tries to push into CA Saturday. Most model runs have it staying to our north and keeping us dry, but a few show it pushing far enough south for a little more snow. So we will keep an eye on that all week.

Overall, we are expecting a mostly sunny MLK weekend with slightly warmer temperatures. Highs into the 30s on the mountains and 40s for lake level.

Going into the week of the 20th the ridge should become more established over the West Coast. 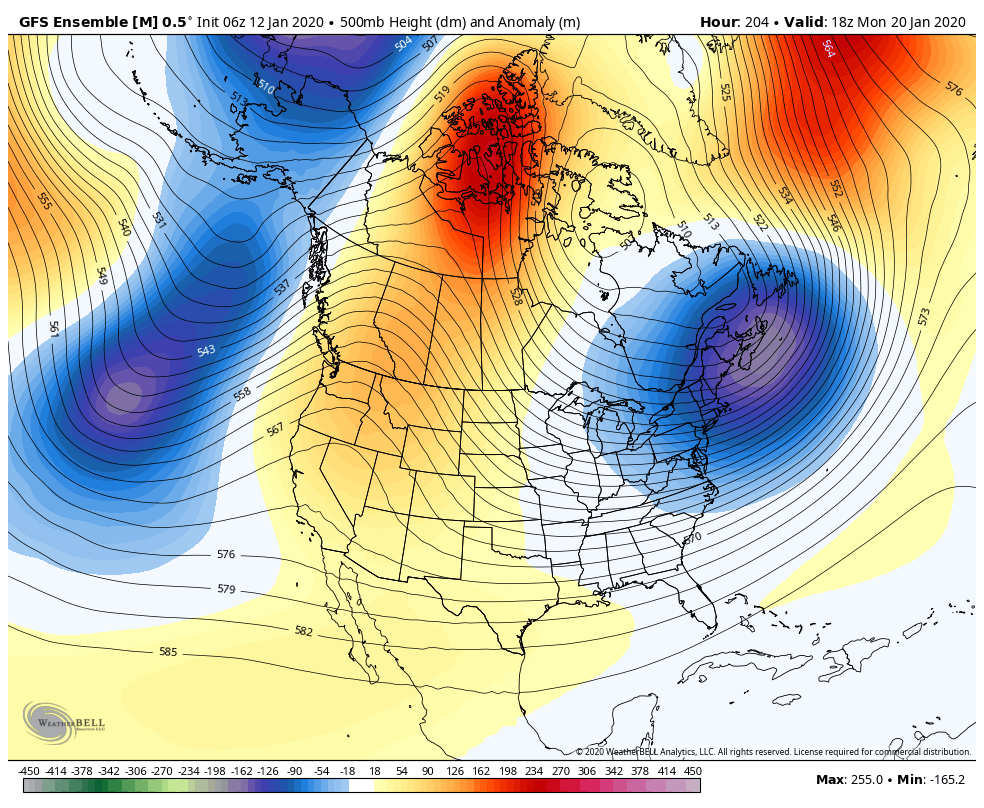 The long-range models suggest we could stay in this pattern through the end of the month. It is not a strong ridge and the trough is sitting just off the coast. Storms will try to push into the West Coast and weaken. The GFS model tries to push weak systems into CA through the last week of January, but the other models keep us pretty dry.

Overall, the long-range models show below-average precipitation for CA through the end of the month starting Friday. I think we will have to watch and see if the strong MJO activity continues through the Pacific and back into the Indian Ocean going into February. That would give us a chance for a couple different patterns that could bring back storms. So we will keep watching. Good thing we weren't expecting a big season... 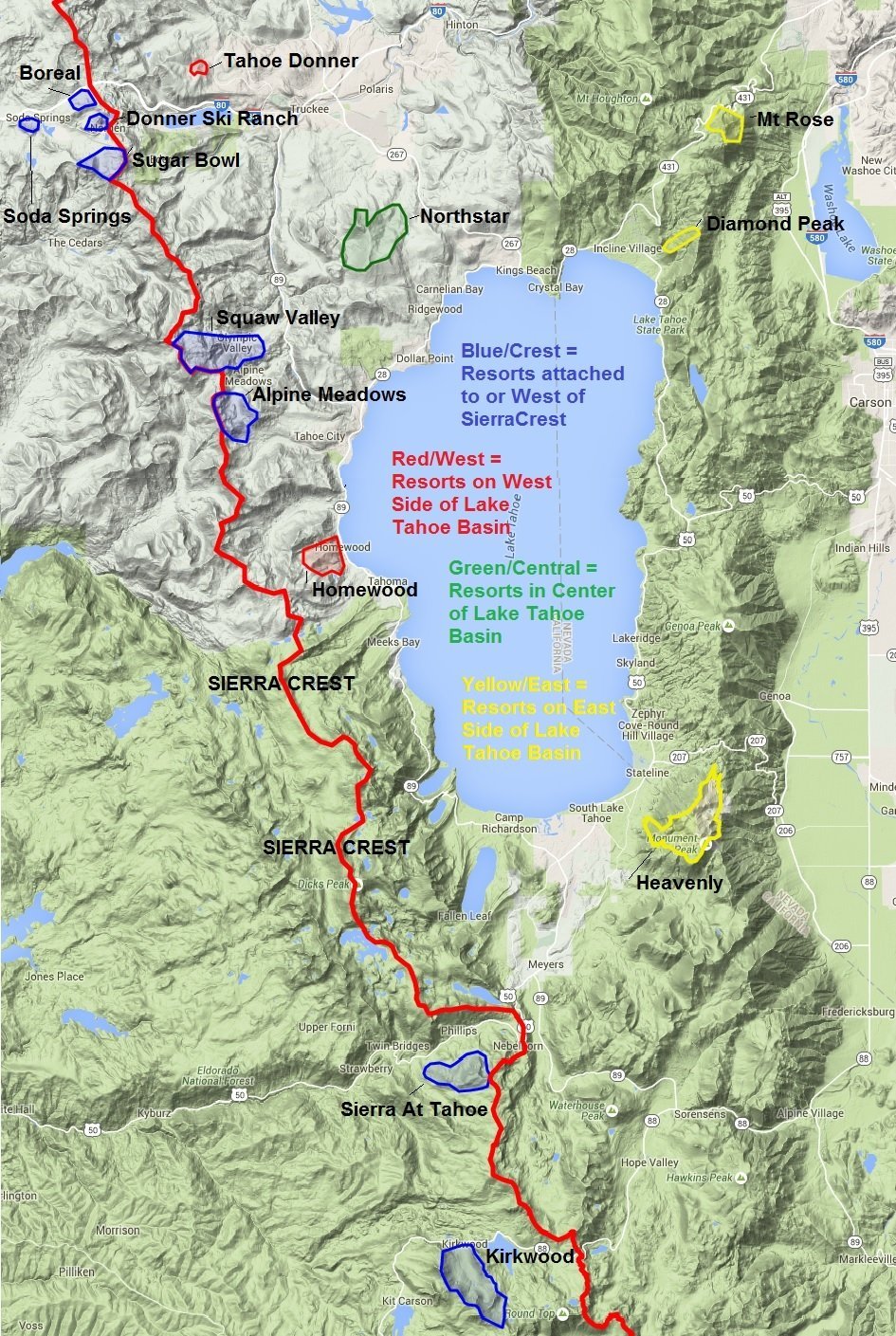