The Death of Winter... 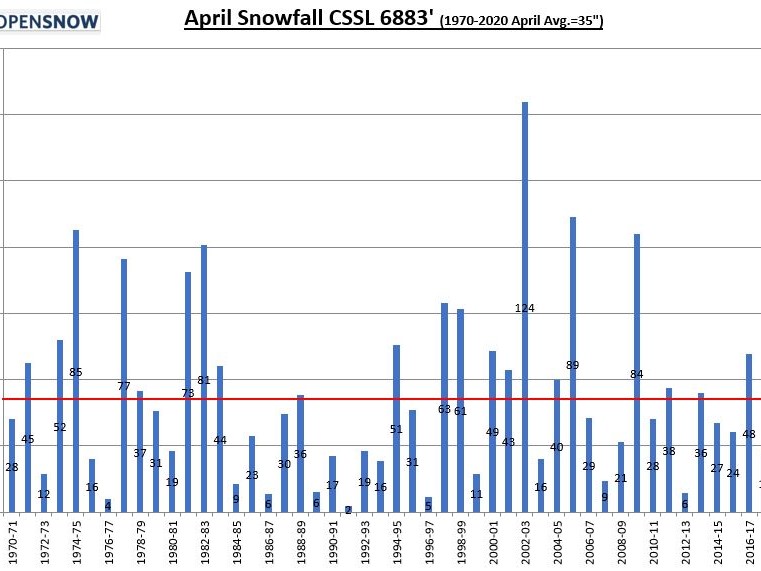 Sunny and mild weather continues. We could see more storms later in April, but most ski areas will be closing over the next two weeks, so time is running out for any storms that could bring one last day of fresh tracks. Stay tuned for more recaps on what happened this winter, along with stats and graphs.

The story of this winter has been the long-range patterns looking positive and then looking more negative for precipitation once we get closer. This has ended up being a fairly typical La Nina season for northern CA with below-average precipitation and cold/weak storms when we've seen them.

The story continues to repeat itself as we go into the week ahead. For weeks the long-range models all agreed on a shift in the pattern that could bring precipitation this week, and now that we are going into the week they have been back-peddling and trending drier.

Happy Easter! Sunday will be beautiful with sunny skies and mild temperatures. Highs in the 50s to around 60 degrees at lake level.

We have a splitting trough this weekend with a cut-off low well off the West Coast and a cool trough that will move through well to or northeast Monday. So once again we have cold/cool front that will bring cooler temperatures and wind but with little precipitation. 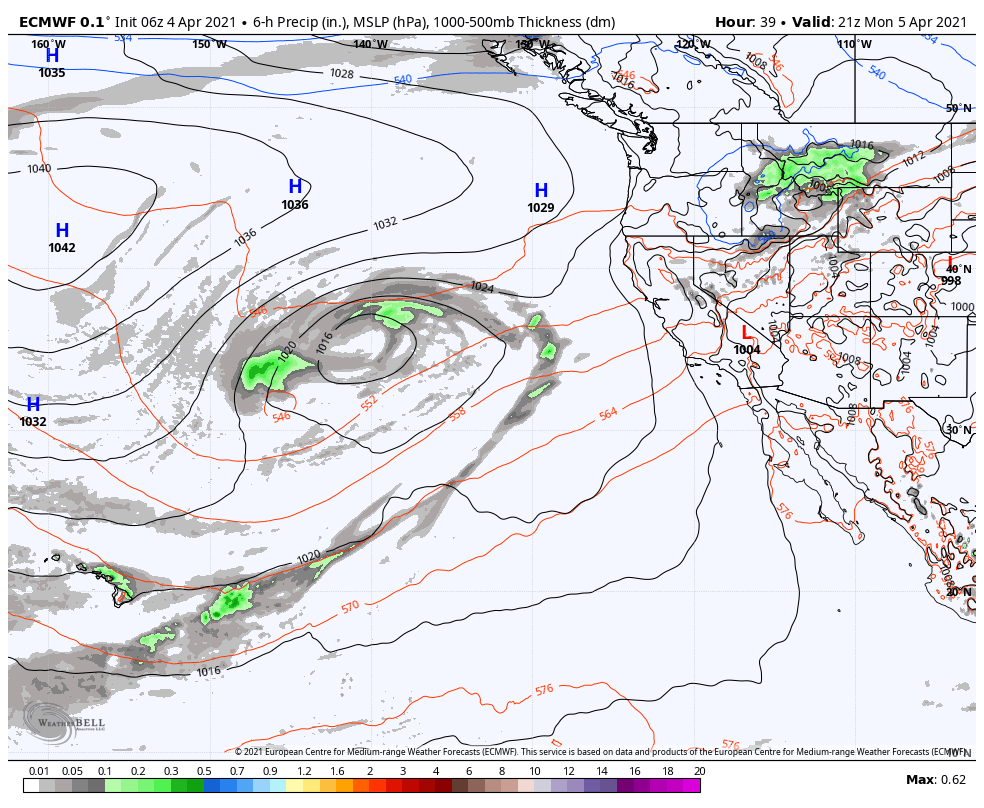 Earlier in the week, the models had this system tracking farther south into northern CA with rain & snow, but now we may be lucky to see some clouds and a few scattered showers Monday. Ridgetop winds could be gusting 60-70+ mph from the SW which could affect some exposed upper mountain lifts. Highs cooling into the 40s on the upper mountains and 50s at lake level.

A flat-ridge builds in over CA with a dry pattern now expected through at least next weekend. 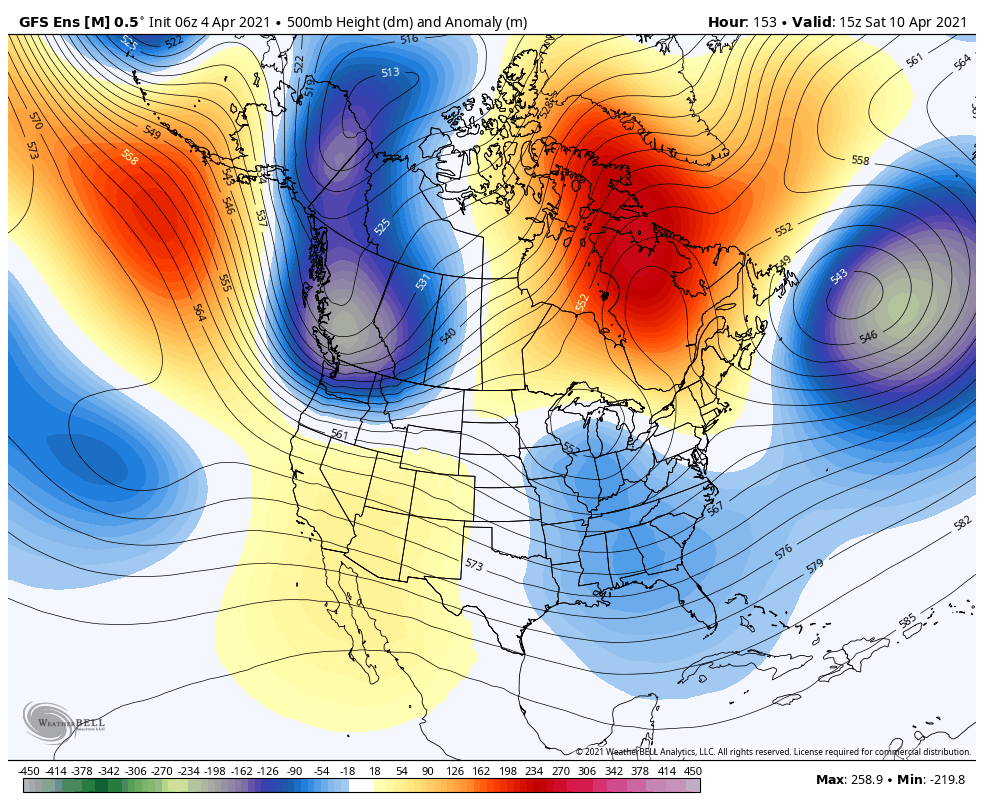 We should see sunny skies, lighter winds, and highs into the 50s through the period. The long-range models had suggested for a couple of weeks that we would see deeper troughs down the West Coast during this period, but as you can see on the map above the troughs are now forecast to only dig south into the Pacific NW and then into the Rockies.

Here is a look at the total precipitation forecast through next weekend showing the storm track remaining into the Pacific Northwest and the northern Rockies. 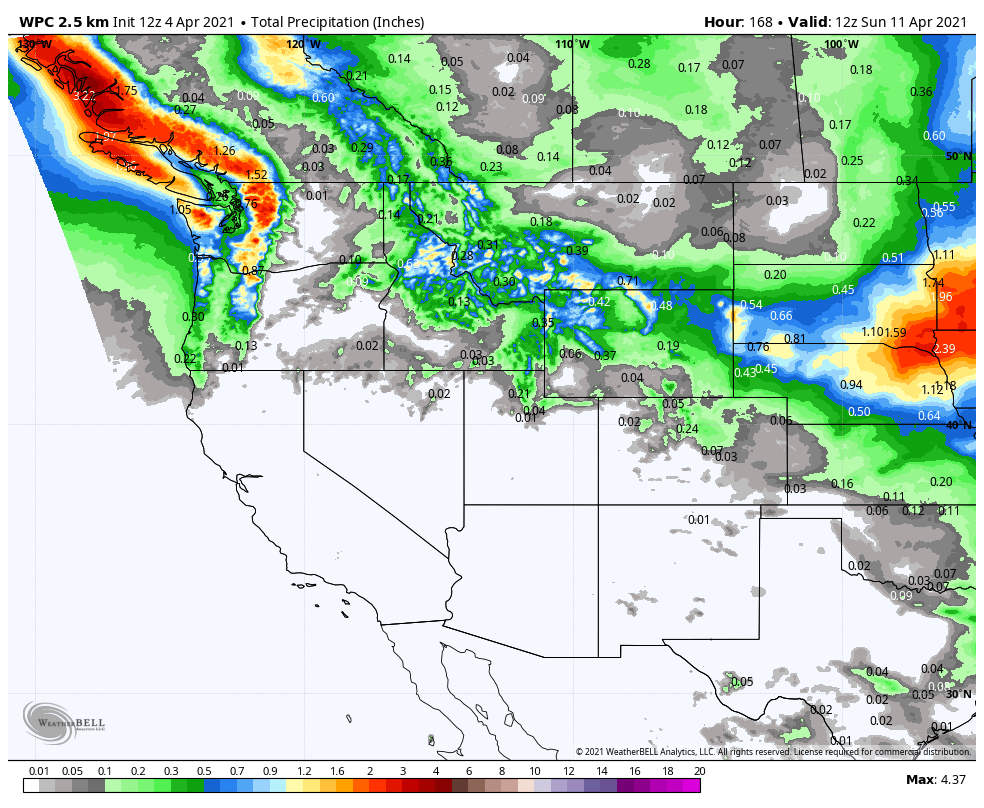 I have given up all faith in any long-range forecasts for the rest of the Spring. Looking at the teleconnection patterns I thought they agreed with the West Coast troughing the models were showing for Spring. The long-range models continue to try and put a trough over/near the West Coast in the long-range next Sunday... 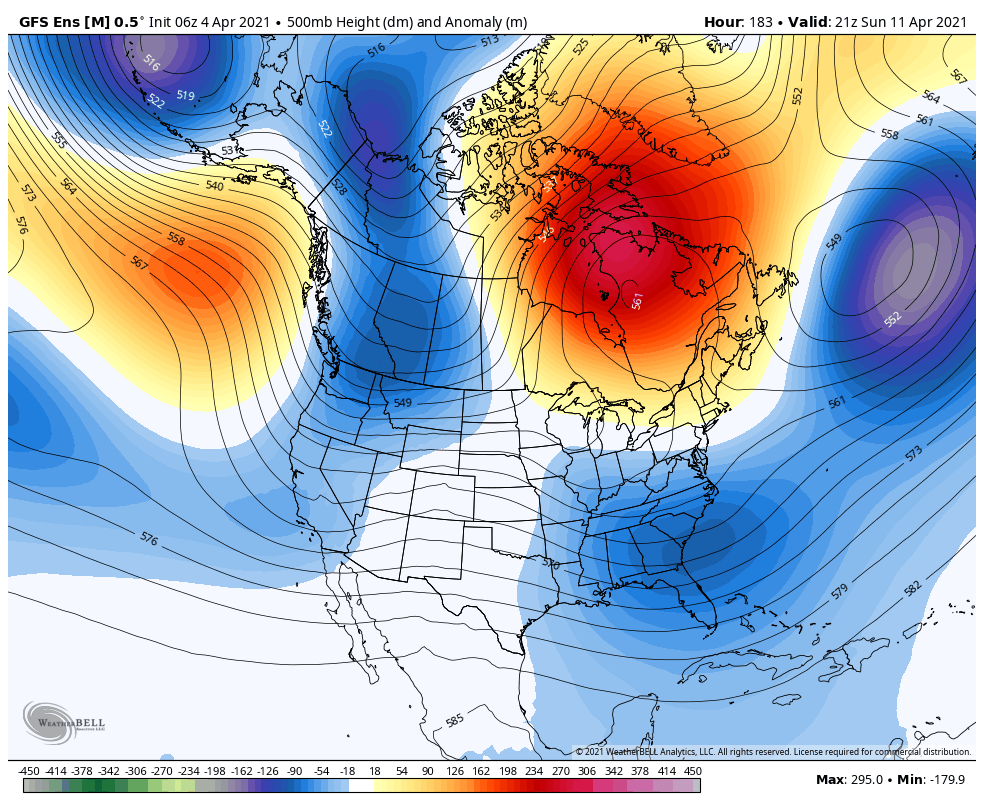 ...and through the 3rd week of April. 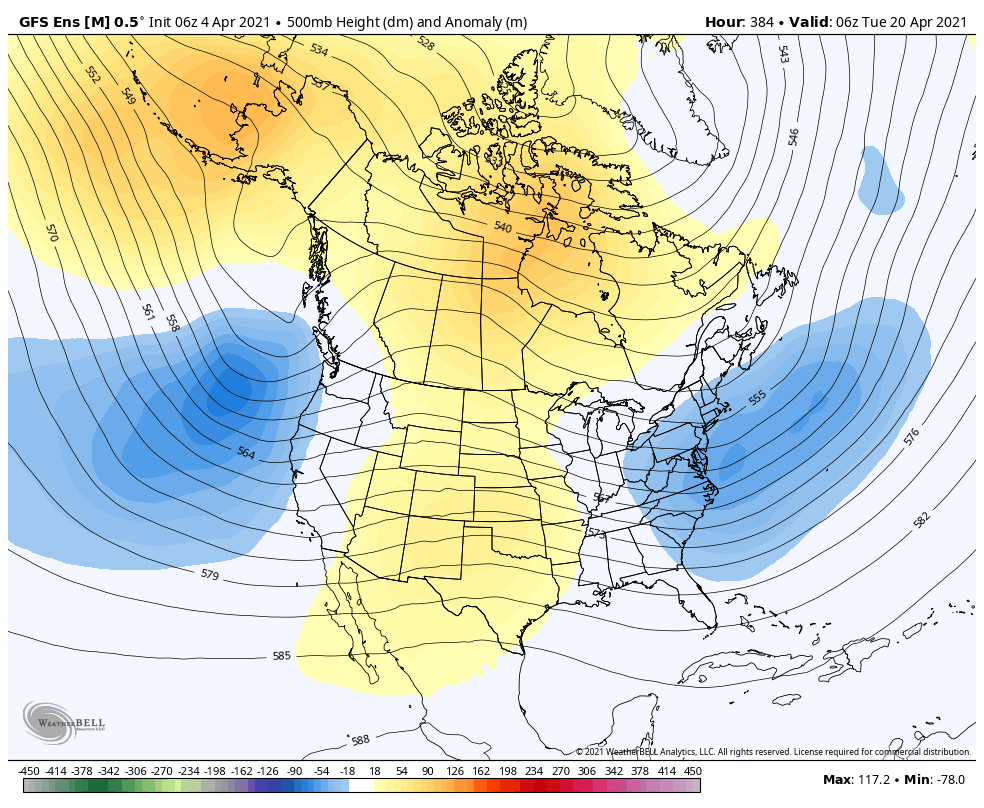 We could see more storms later in the month, but most ski areas will be closing over the next 2 weeks, so time is running out for any storms that could bring one last day of fresh tracks... I'm not going to just continue to post and speculate out into the Fantasy Range as long-range forecasting becomes much harder during Spring as the patterns change going into Summer.

April sees 35 inches of snow on average at the Central Sierra Snow Lab near Donner Summit. We have zero inches so far this month and a forecast for zero now through at least the 12th of April. In the last 50 years, we have never had no snow in April, the lowest was 2 inches in 1992. 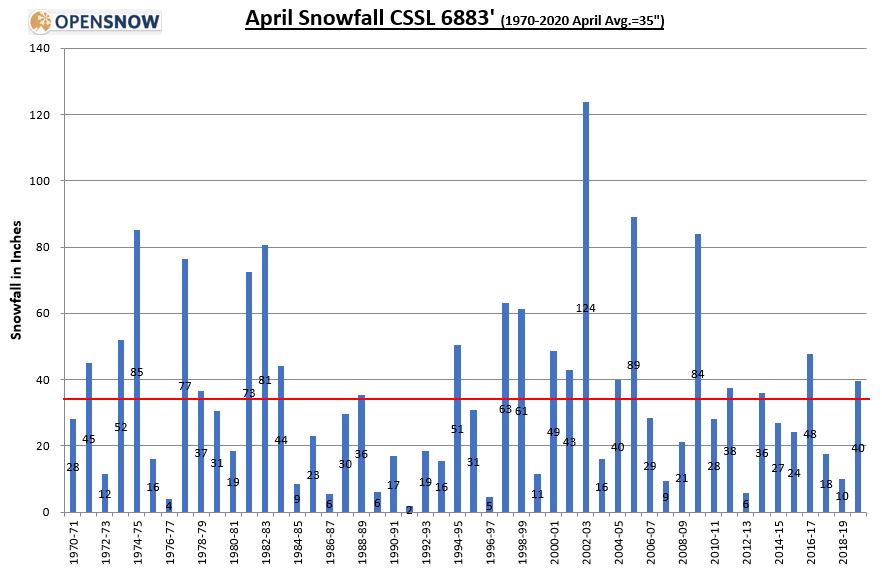 The odds are in our favor to get statistically the longer we go without snow this month, and the long-range models continue to try and bring storms beyond a week out. But I will likely not be posting again until we get consistency among the models that we could see precipitation within a week or less... 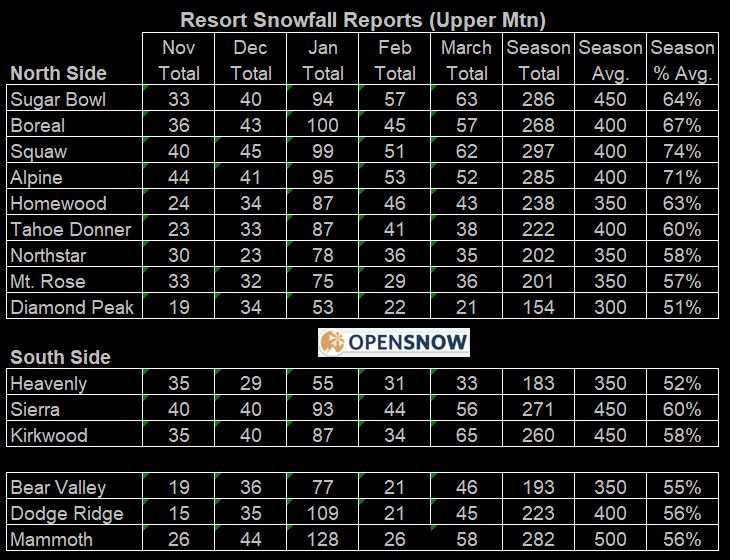 We hit a peak of around 75% of average. The last time we had measurable snowfall was 3/23. We still have time to pick up more snowfall. The Snow Lab is closer to 70% of average for the season and that could go up if we see any snow in April & May, but most of the ski resorts will be closed in 2 weeks with limited ability to get any snowfall reports after that.

We continued to have hope through March but now it seems we are seeing the quick death of winter. Will we see any sort of resurrection later this month? We'll see, but confidence is low with how this winter has gone. Hopefully, we won't be setting a low snowfall record this month, we will need a lot of prayers for fire season...

P.S. Thank you for following along again this season, and for hanging in there through another rough season of forecasting snowfall in California. I'm always grateful someone is as obsessed with snow as I am!

P.S.S. I'll be posting at times throughout the spring whether or not we get any storms. I'll start posting recaps on what happened this winter along with stats and graphs.

The FINAL episode of The Flakes Podcast is out!

This week we go through the final snowpack numbers, the top 10 list for ski resort snowfall totals, more nerdy data, the snowfall reports from the past week, and a look at the weather for the rest of April...