A cooler start to the forecast period, then warming up again for the weekend. The sunny and dry pattern continues for now, with smoked mixed in from the fires.

The big story this week was obviously the Caldor fire south of Lake Tahoe. We are still dealing with the spreading fire and smoke and full containment isn't expected for 2 weeks.

Many homes have sadly burned. Today they are working to fend the fire away from Kirkwood and areas near South Lake. Here is a look at today's map of the areas burned so far. The area farther south is the older Tamarack fire area from earlier in the summer. 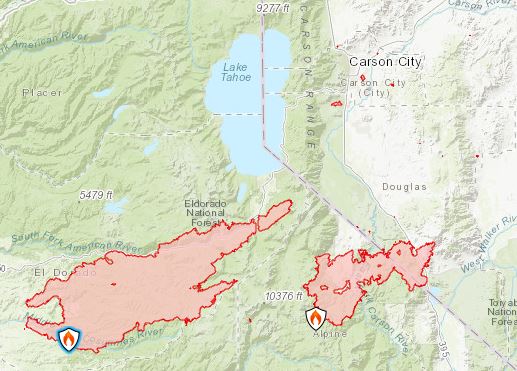 The firefighters have been doing a pretty good job of fending the fire away from burning down large neighborhoods so far. They are keeping the fire south of the city and heading east in the mountains towards Nevada.

The fire did burn through Sierra at Tahoe but they had the snow guns aimed at the buildings which saved most of them. The scenery will be different this season but hopefully, enough was spared that having a season will be an option.

The smoke from the fire has been bringing thick smoke to most areas over the last couple of weeks. Higher southwest wind gusts the last few days have actually narrowed the smoke plume with some cleaner air for the north side of the lake and parts of Reno during the afternoons. 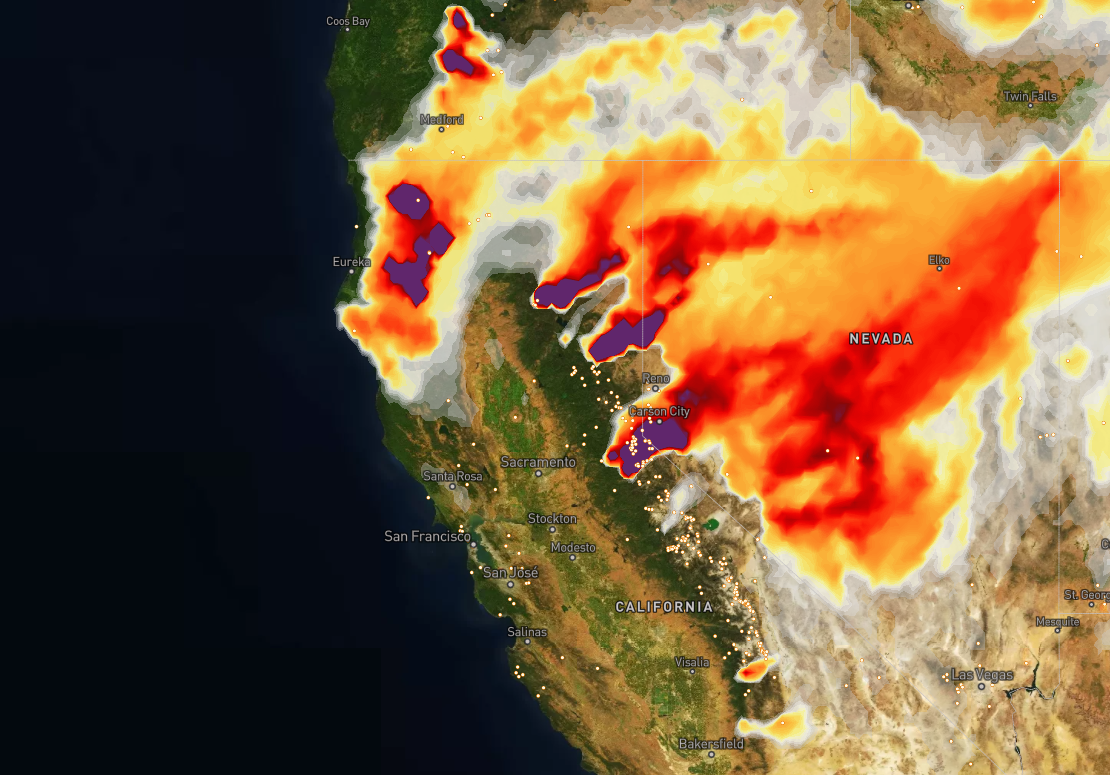 Our smoke forecast maps show the smoke moving back in over most areas by Friday as the winds become lighter and more variable. 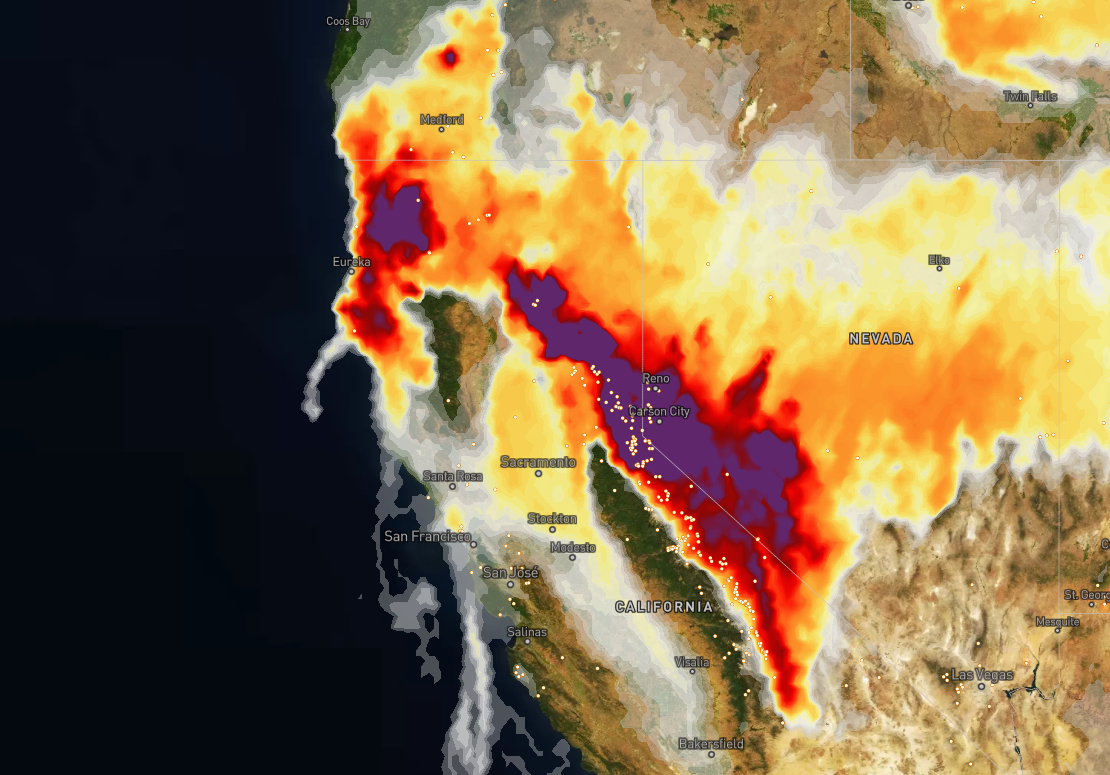 We have some cooler air in place through Thursday with highs only in the 70s at lake level. Then high pressure builds over the region through the weekend with a warmup back into the 80s. 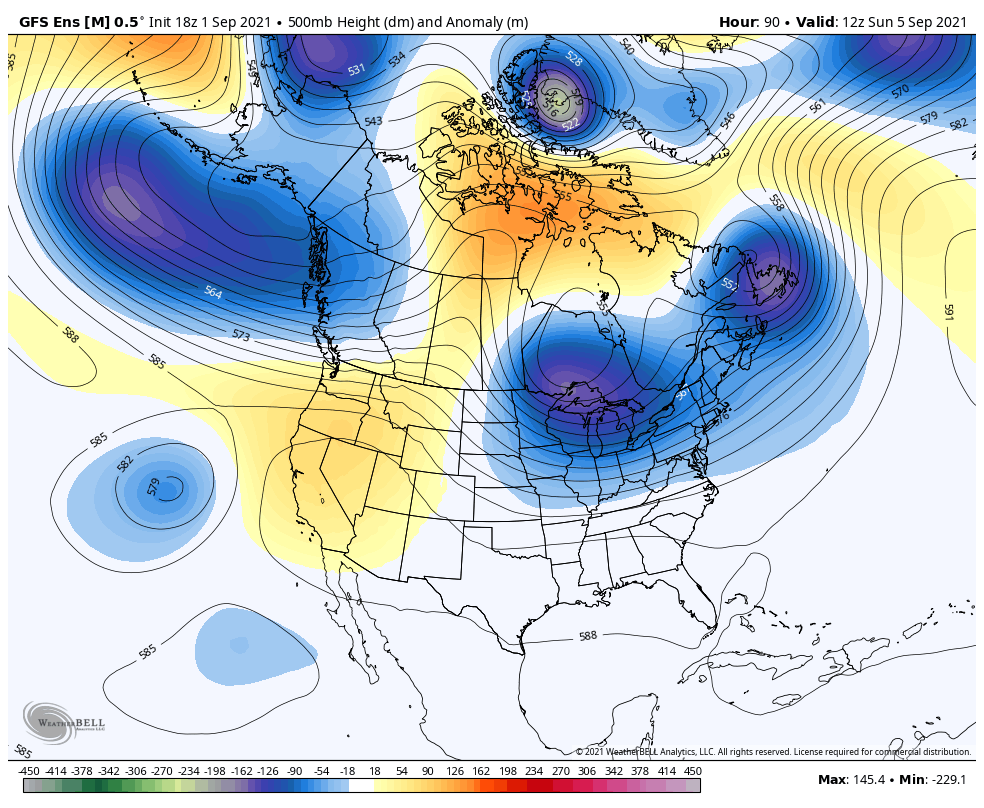 The dry summer-like pattern looks to continue through next week. Hopefully, the fires will be diminishing with improving air quality over the long range. Other than that we have boring weather into next week.

Change in the Seasons:

Today is the 1st day of Meteorological Fall. September is always a fun month for us as we change gears towards winter. We can also start to see the first storms of the season. If not in CA then usually in other mountain regions we will see some of the first snows.

I have been writing a weekly forecast on Wednesdays all summer based around weekend weather for those coming up to play in the mountains. The forests are now closed and we have fires, plus this weekend is Lab Day and the seasons are changing. So I'll likely shift gears to start looking for storms and looking towards the upcoming winter pattern.

On that note, let's take a look at the forecast beyond a week for the first time since Spring. The long-range models continue to suggest a trough pushing in around the end of next week into the week of the 13th. 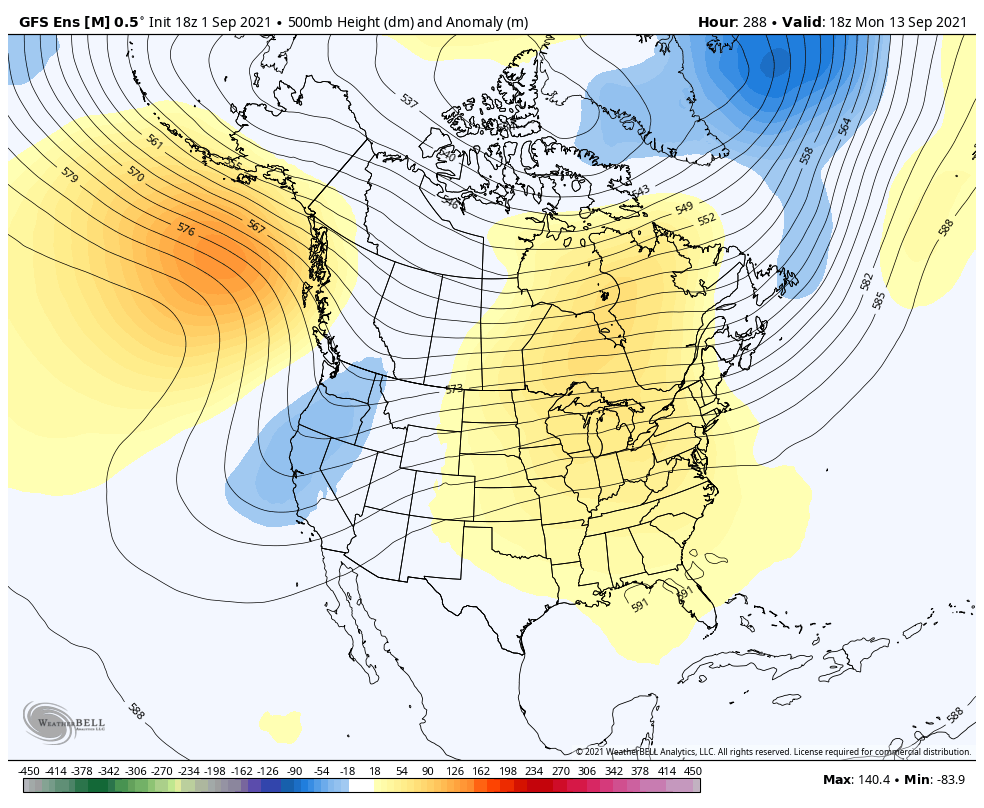 It's still early so if any storms dive into the trough they are likely to be weak with little precip. Some of the long-range models like the European (ecmwf) keep us mostly dry through mid-month... 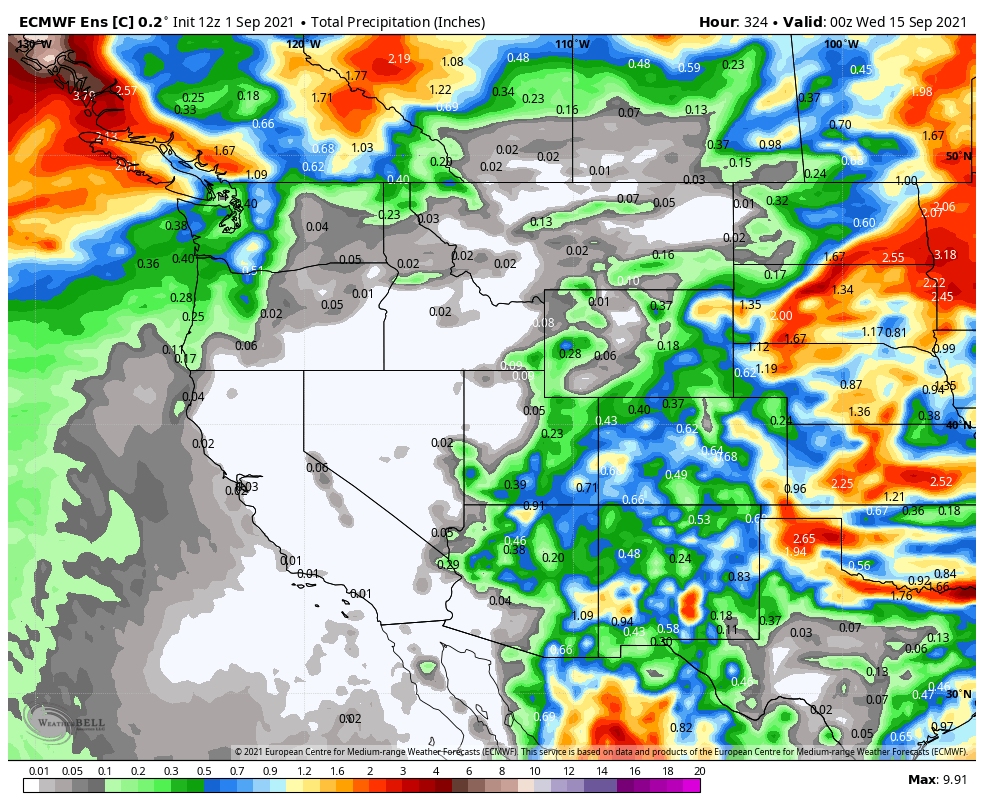 ...but others like the GFS and Canadian models suggest we could start to see some precipitation. The Canadian ensemble mean model below is the most aggressive right now. 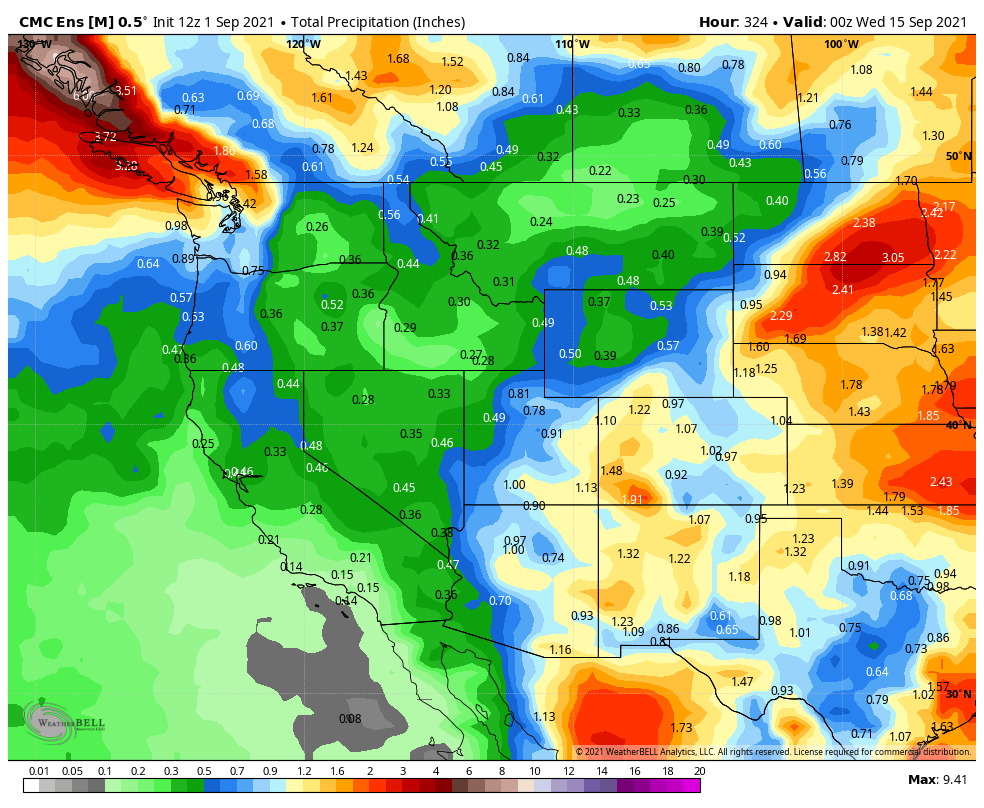 There has been a suggestion that we could see some precipitation by mid-month for several days now, but we don't have much faith this far out, and any systems would likely be weak. We need any rain we can get right now though as anything will help to start putting out the fires...

We have started to look at the upcoming season over the last couple of posts. We looked at the European seasonal model for the fall and the WxBell winter forecast. Those showed the possibility of near to above average precip through November, but overall below average for the season. We also started to talk about why they were showing that.

Today we will look at a few more models for the fall and NOAA's look at the winter months. Interestingly the CFSv2 seasonal model and the Canadian seasonal model are both similar to the European seasonal model we looked at in the previous posts in showing above-average precip this fall for the Pacific NW. 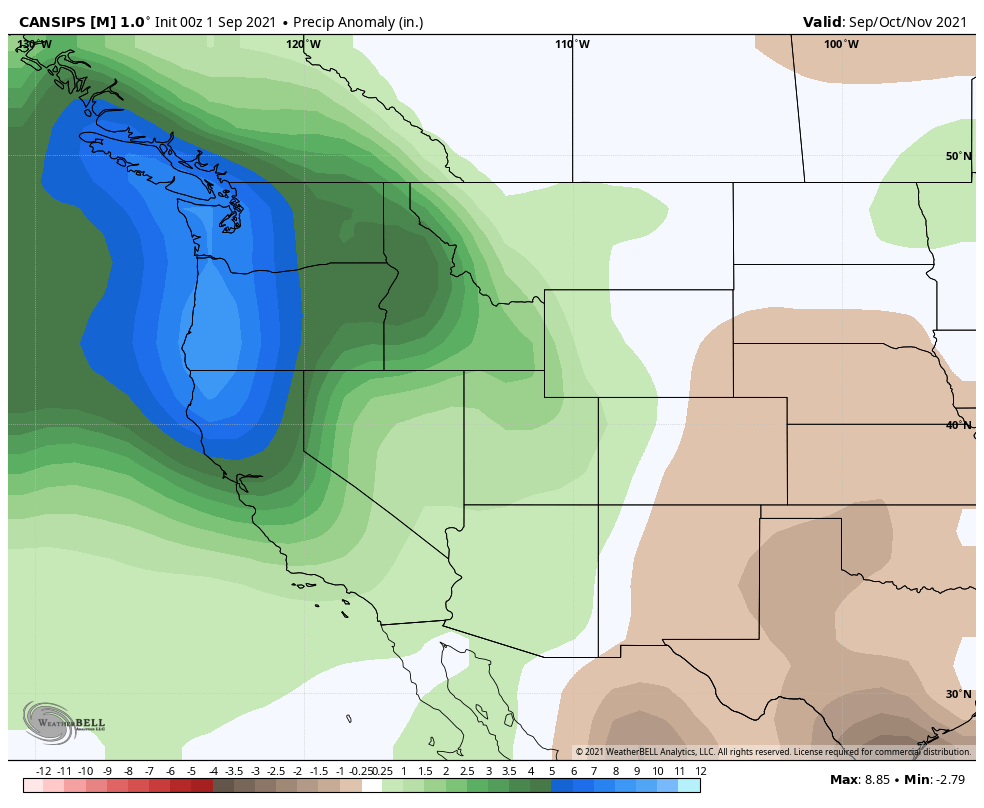 The Canadian above is the most aggressive so take it with a grain of salt. It is not uncommon going into a La Nina season to see above-average precip in the Pacific NW, but it is usually harder to get storms farther south into CA. But it is interesting that multiple models now show near to above average precip over northern CA. Most of this precip is forecast for October & November, more so in November.

The forecast for a weaker La Nina and a warmer Indian Ocean and Western Pacific could be helpful with a more active MJO this season. We were hopeful for that last season but it didn't pan out. The QBO in the negative phase and the warm blob farther offshore could mean a more blocky pattern and a better chance for storms to move south down the coast this season vs the dry track down over land much of last winter.

Those are just a few of many things we are watching as we head towards this season. Overall, the forecast for a weak La Nina pattern has most forecasts similar to this time last year with a dry forecast for most of CA and equal chances for above/below precip over far northern CA. The NOAA seasonal forecast is similar to WxBell in showing that.

Hopefully, the other factors I mentioned will bring us a better chance for some ARs and more storms this season. After a few average to above-average snowfall seasons, we are coming off of two seasons that had around 70% of average snowfall.

We will continue to look at more factors that could affect the season ahead and at more winter forecasts as they are released by weather outlets. I am hoping to work with Mike, our Southern CA forecaster, on looking at historical data this week and working on an analog forecast for CA to share with you.

Until then, we have to get through these fires and pray that the first storm of the season is not too far in the offing.