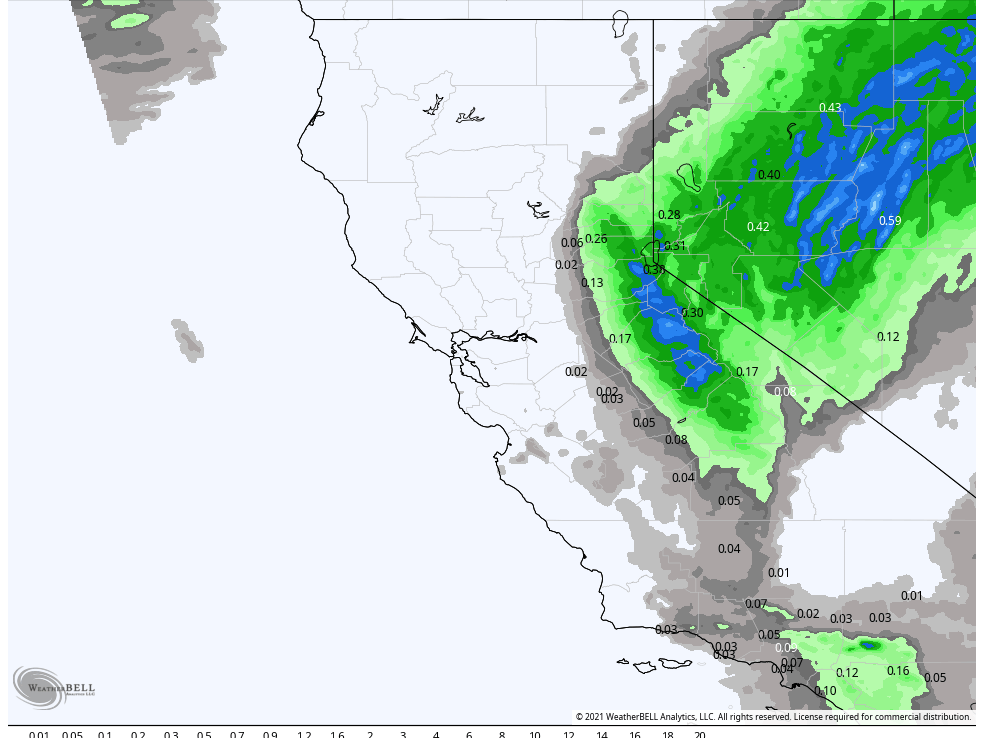 Scattered rain & high elevation snow showers for Thursday into Friday. Then a nice weekend ahead with sunny skies and cool temperatures. Monday another cold front moves through with a chance for a few snow showers. The pattern may remain cool but drier through next week.

Clouds and moisture are streaming into CA today (Thursday).

Some showers moved through Thursday morning with snow levels up around 9000 ft. 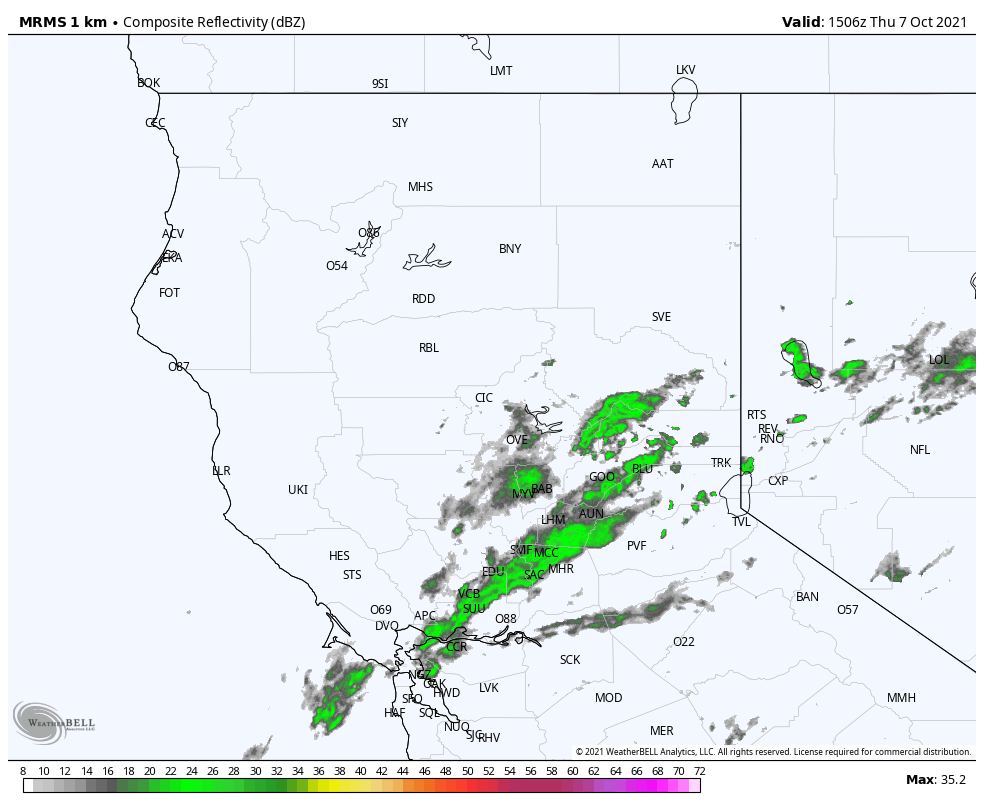 That brought a dusting of snow to the higher peaks. Here is a look at the top of Mt. Rose this morning! 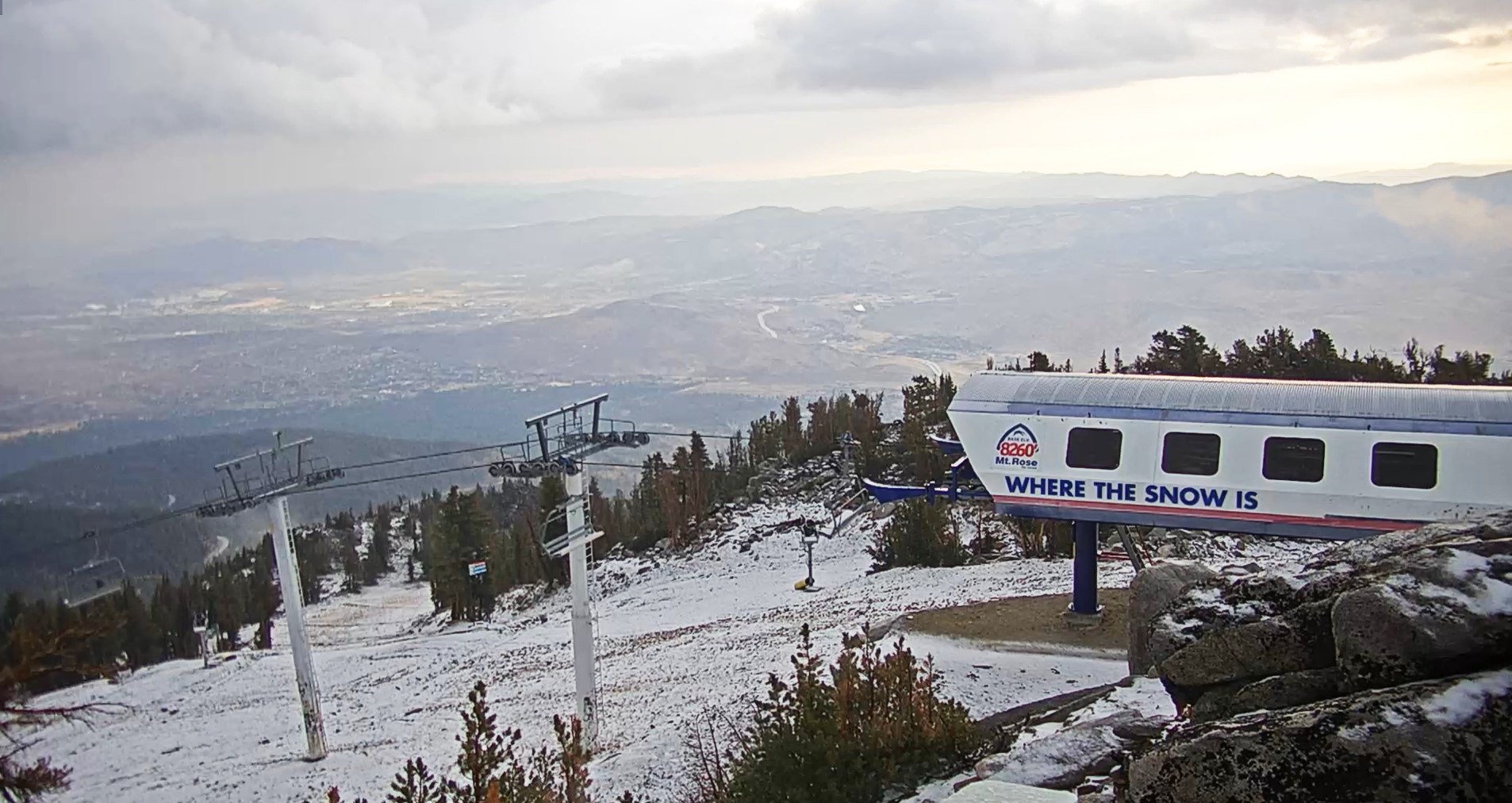 Moisture continues to stream in but showers should be scattered and mostly confined to the west slope and higher peaks that help with lift and squeezing out the moisture. The rest of the region should see clouds and sun with a few scattered showers possible. Snow levels should stay above 9000 ft. through most of the day. Ridgetop winds gusting to 50+ mph from the south/southwest & gusts up to 20+ mph at lake level.

Temperatures and snow levels are expected to fall during this period. This is where it gets a little more interesting. Snow levels could drop to 8000 ft. overnight and close to 7000 ft. by the end Friday morning. That means we could see a coating of snow lower down in elevation and on more peaks.

The latest model runs show 0.3 - 0.6 inches of total precip, with a few peaks possibly seeing just over the high end. Here is a look a the WPC's blended model for total additional precip through Friday morning. 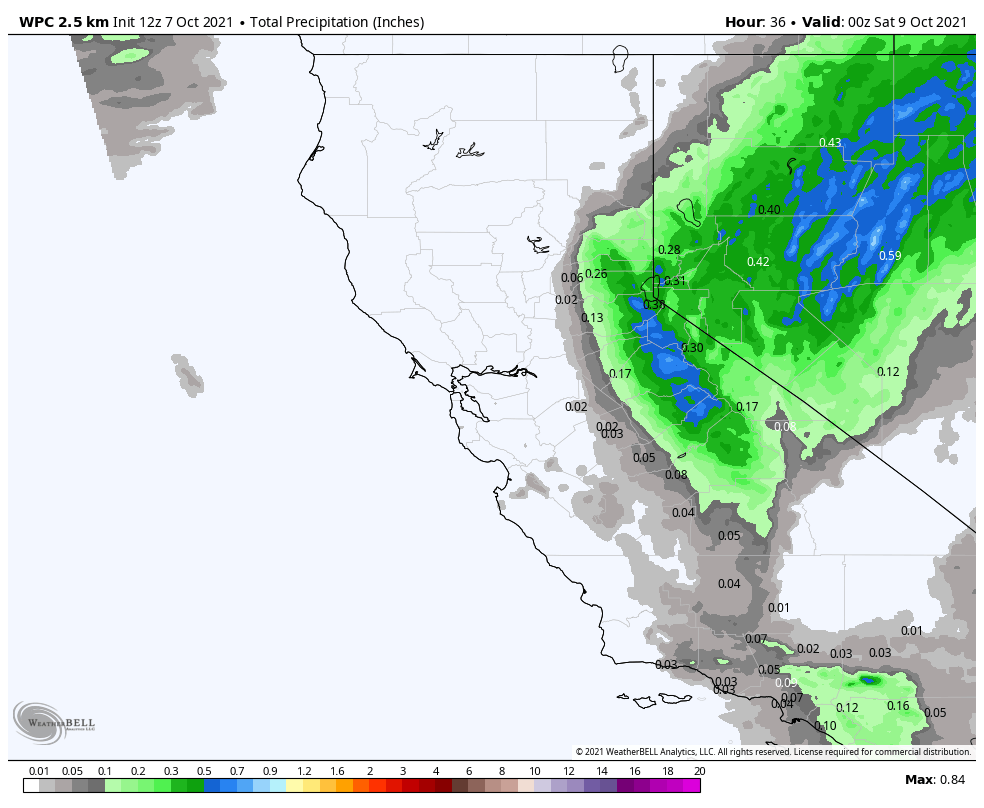 Above 8000 ft. our mountain forecasts show 1-3 inches of snow. That seems reasonable for most mountains through Friday morning. A few peaks could see higher amounts at elevations above 8000 ft. where it stays all snow. These mountains could see 3+ inches. The best chance could be south of the lake along the Sierra crest.

We should clear by Friday afternoon but colder air behind the front should keep highs only in the 40s at lake level and 30s for the upper mountains. A little taste of winter! The ridgetop winds gusting up to 40+ mph from the southwest in the morning will lower during the afternoon and start to turn northwest.

The cold trough shifts east and high pressure builds in briefly over CA. 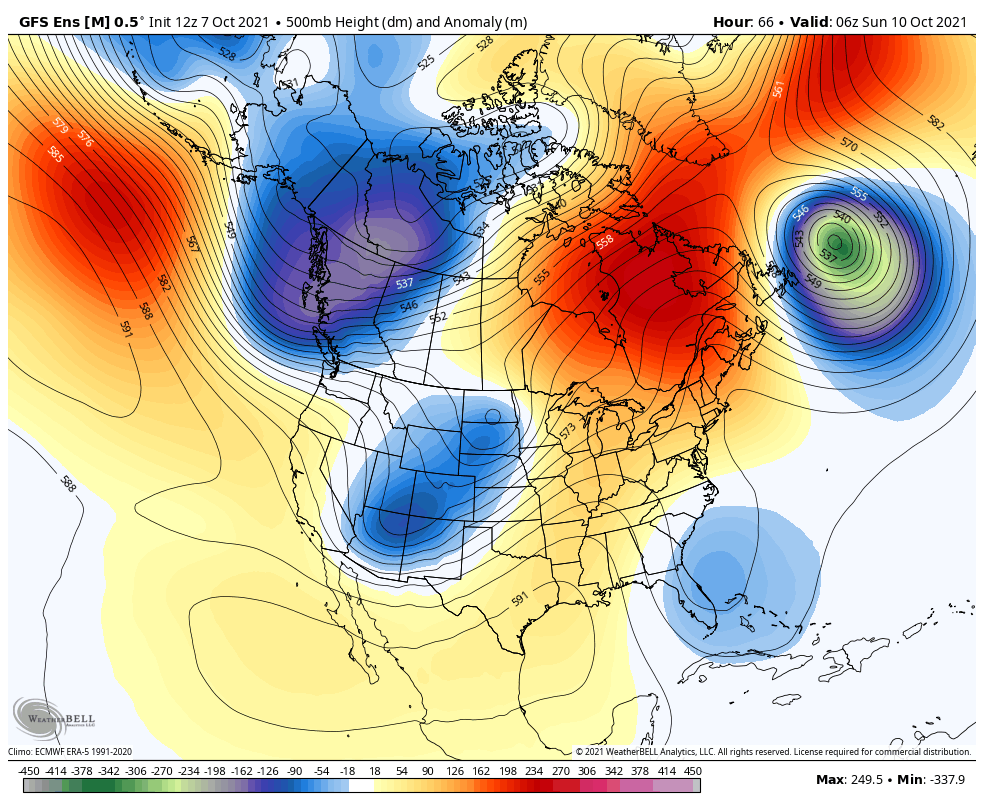 It should be a beautiful weekend with sunny skies, lighter winds, and warming temperatures. Highs warming back into the 50s at lake level Saturday and warming to near 60 degrees Sunday. Lighter north/northeast winds Saturday turning towards the west Sunday, and then increasing Sunday evening ahead of the next system approaching.

Another cold trough digs into the West Monday, but this time moving down more from the north instead of northwest. 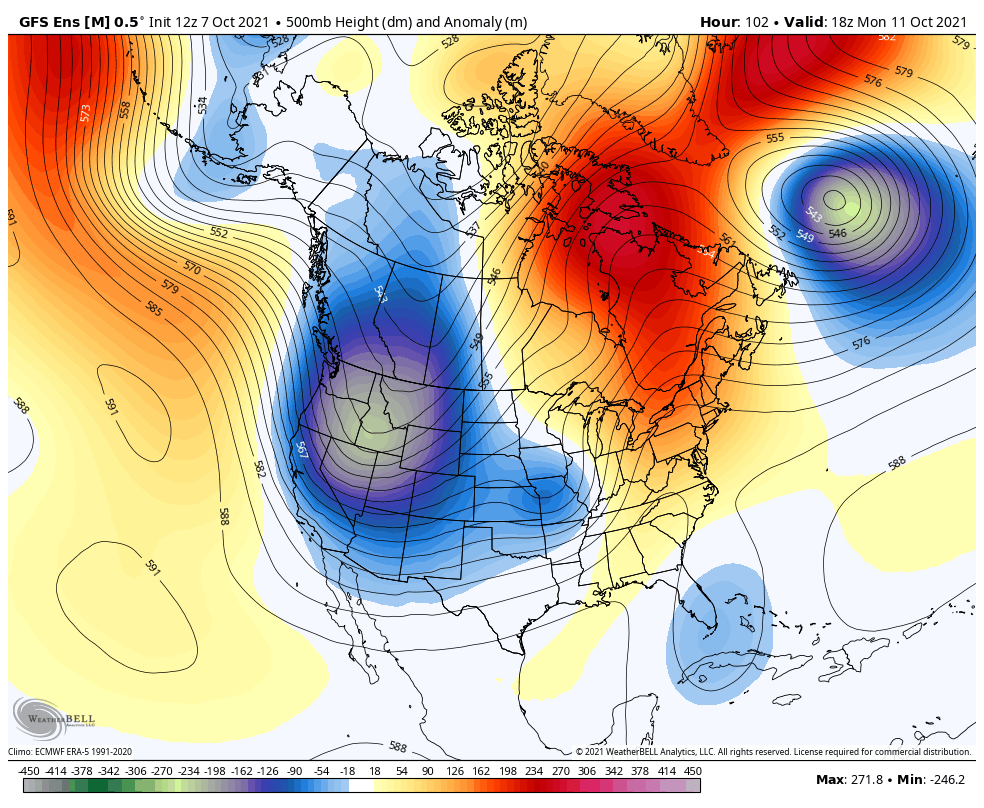 This is a colder but drier track. Highs should drop into the 40s again by Monday at lake level and 30s for the upper mountains. Winds pick back up with ridgetop winds gusting up to 50+ mph from the north and west by Monday afternoon.

We could see some snow showers with the passage of the cold front on Monday. The amounts of precip look pretty meager but a burst is possible with the frontal passage. The snow levels will be dropping well below lake level, below 5000 ft, so the chance is there to see a few flakes below lake level.

Sunny skies for Tuesday but it may stay cold with highs only in the 40s & 30s. Then warming into the 50s at lake level by Wednesday.

Another trough is showing up on the long-range models settling in from Alaska to northern CA later next week. 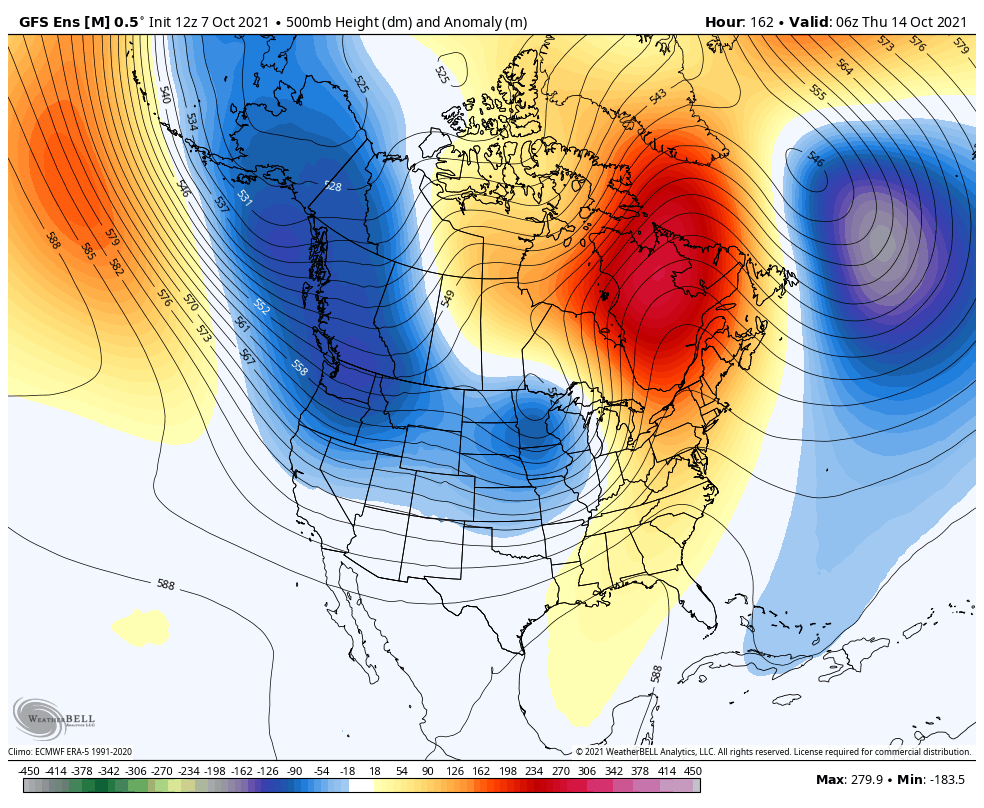 This setup may continue cool but dry weather with the storm track mostly remaining to our north. Some of the long-range models suggest the trough could dig deeper beyond mid-month with the storm track shifting farther south into CA later in the month. We will continue to watch for that potential.

I'll have more posts on the winter forecast coming up. We are still looking through the setup and what the winter could bring. I will have my seasonal snowfall forecast out in October...