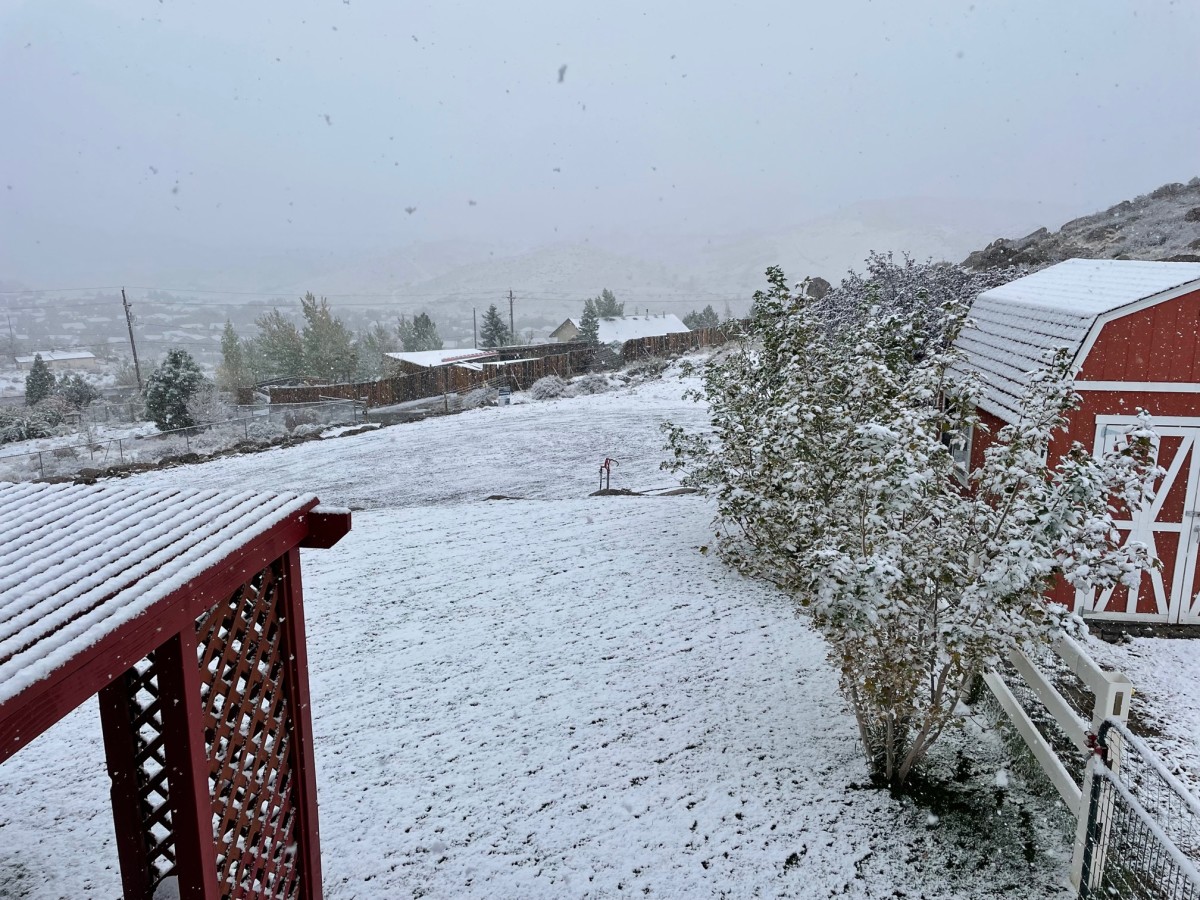 Snow showers Monday morning. Then a cold northeast wind event Monday afternoon into Tuesday morning. Chill through Thursday. Then warming with nice weather through the weekend. Bigger storms are possible starting around the 22nd.

We have another snowy morning this morning. The cold front brought a burst of snow as it moved through Monday morning as expected. We even saw up to an inch of snow in the foothills near Reno. 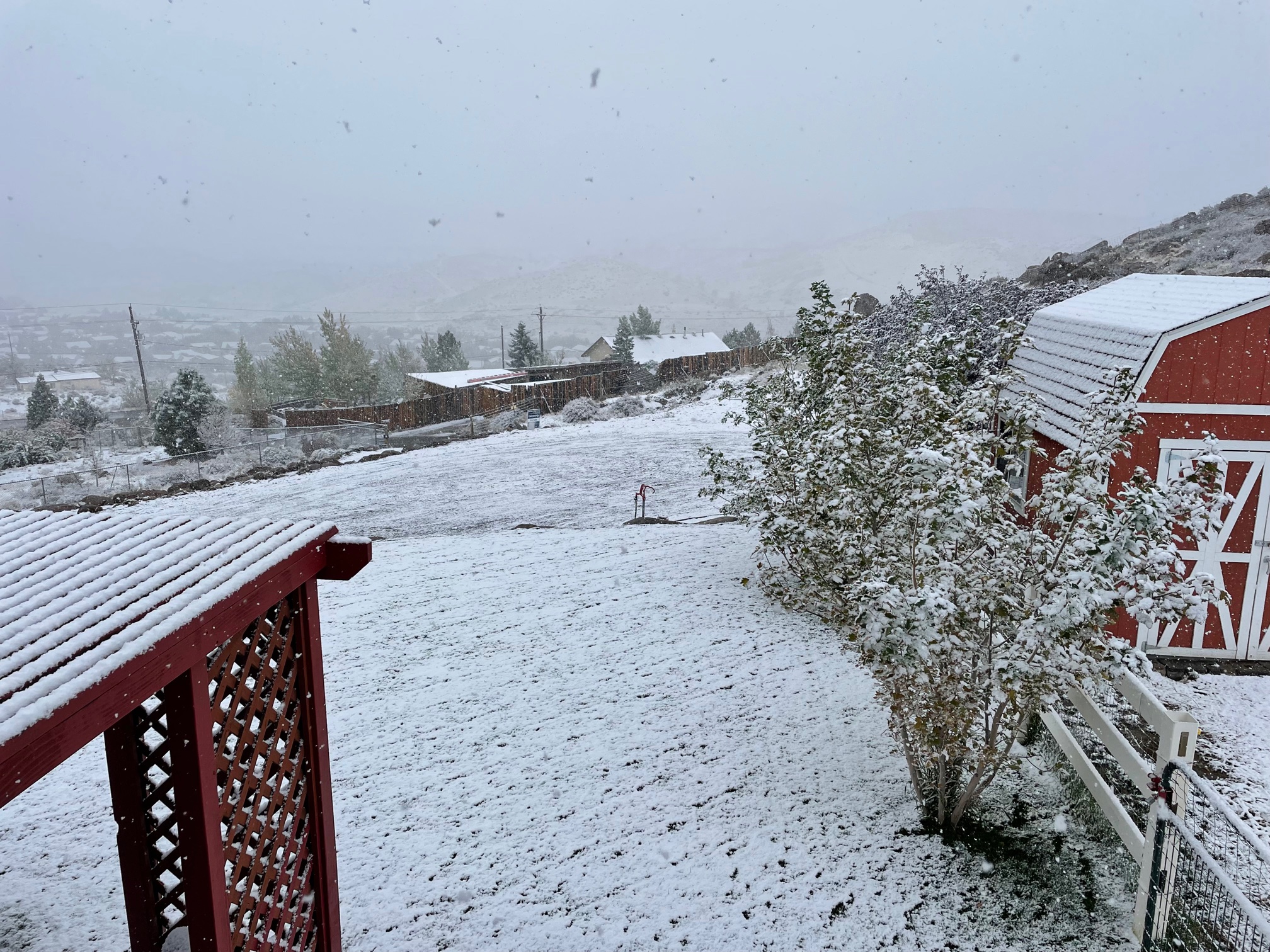 The winds are turning northeast and picking up this morning. The cold air moving over the much warmer lake water is setting up a lake effect snow band to the south of Lake Tahoe. 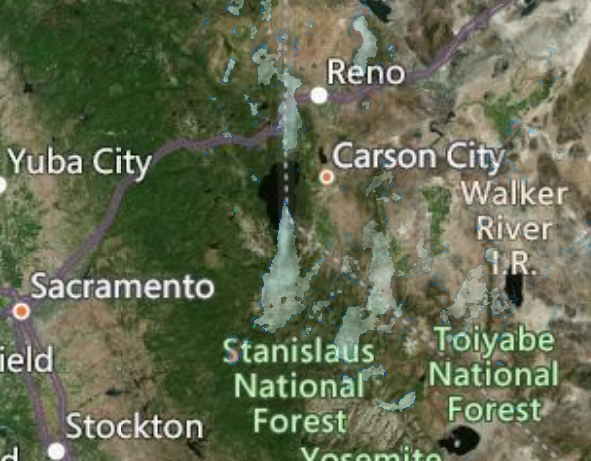 That could continue for several hours Monday bringing larger snowfall amounts from around Meyers down to Sierra at Tahoe and Kirkwood. Several inches of additional snow is possible under this band while the sun starts to come out around the rest of the region.

The strong northeast winds are expected to continue until Tuesday morning with gusts up to 30+ mph on the lake and 60-70+ mph over the ridge tops. Highs for Monday only in the 30s for lake level and 20s for the upper mountains.

We have built many new features into OpenSnow & OpenSummit this year. Here is a cool one. If you are heading out to mountain bike or hike you can see the trail conditions on OpenSummit, and the weather history for the past 24 hours. Here is Mt. Rose this morning. 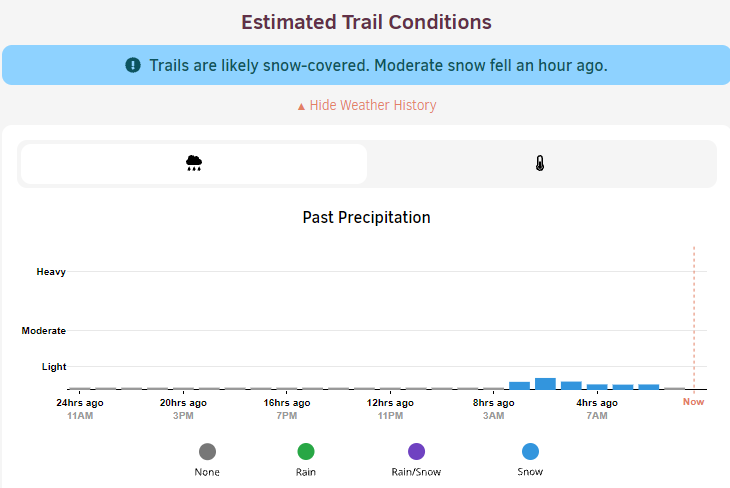 Be sure to explore both sites and check out all of the new features as we add them!

The system spinning over the Great Basin Monday will move east on Tuesday.

The winds start coming down Tuesday afternoon and the sunny skies return, but it stays cool with highs only in the 40s at lake level and 30s for the upper mountains.

Another trough digs into the Pacific NW Wednesday but not as deep. The moisture looks to stay to our north this time. Expecting mostly sunny skies through Thursday but it stays cool with highs in the 40s to near 50 degrees at lake level and 30s to near 40 degrees for the upper mountains. 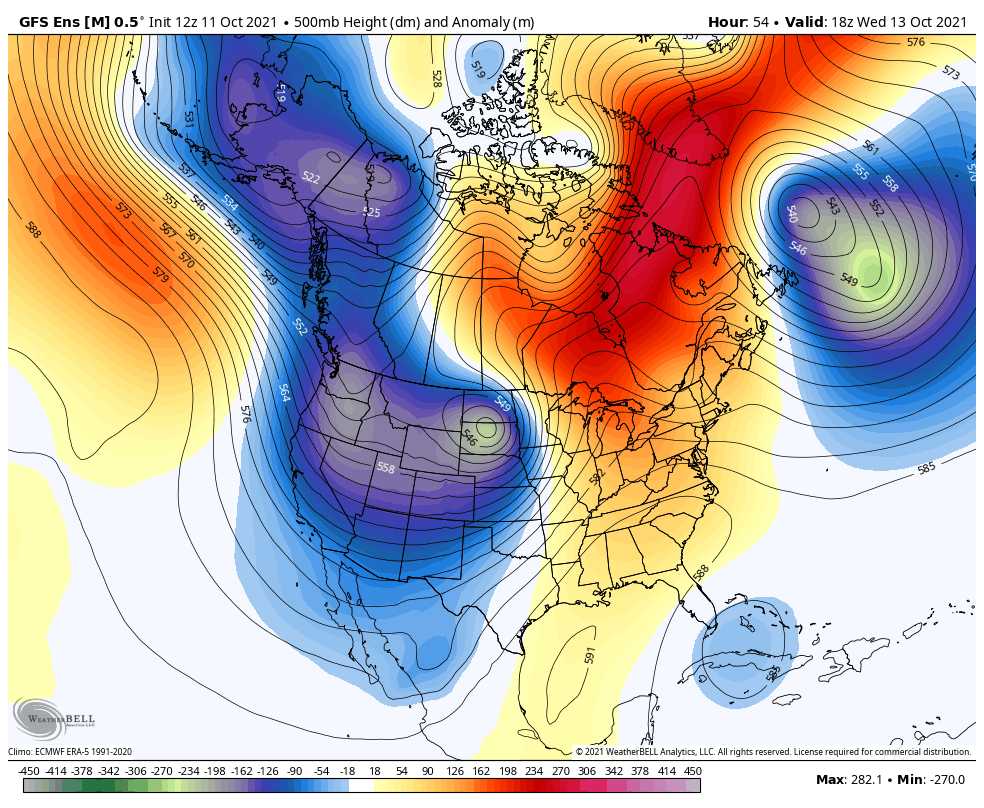 The trough shifts east by Friday and high pressure builds over CA over the weekend. 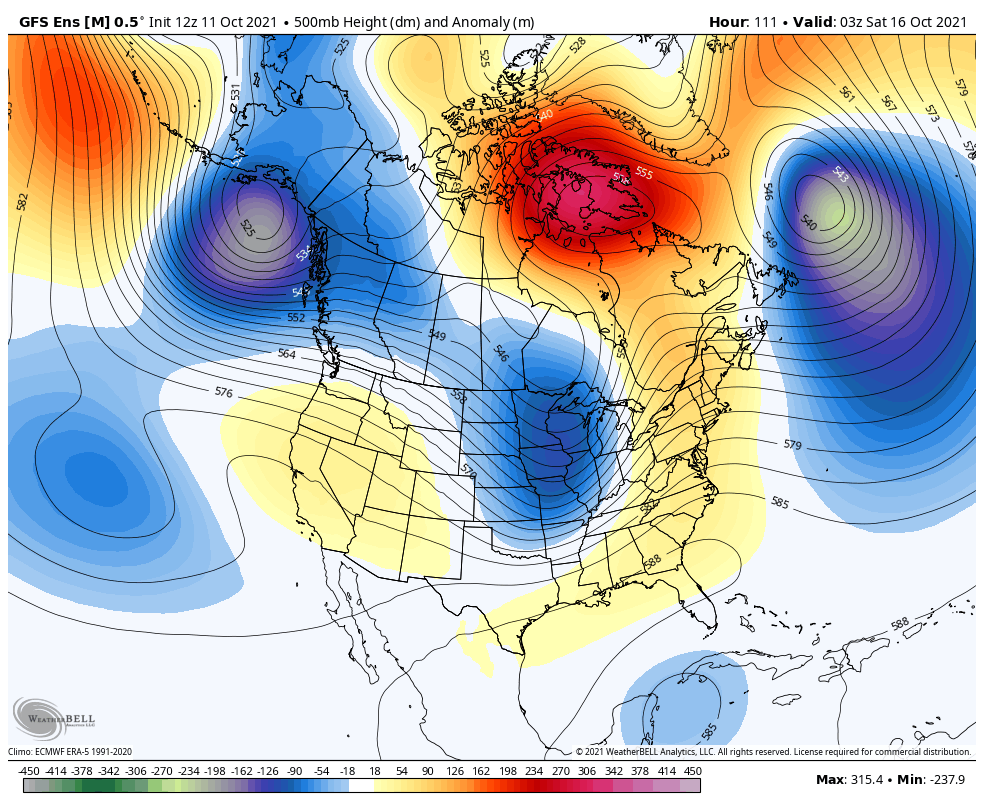 We will warm up into the weekend with dry weather. Highs warming into the 50s at lake level Friday and then 60s for the weekend. Also expecting light winds so it should be a beautiful weekend again!

Next week should start off nice next Monday, but then we may start to cool down again as another trough digs towards the West Coast by the middle of next week. 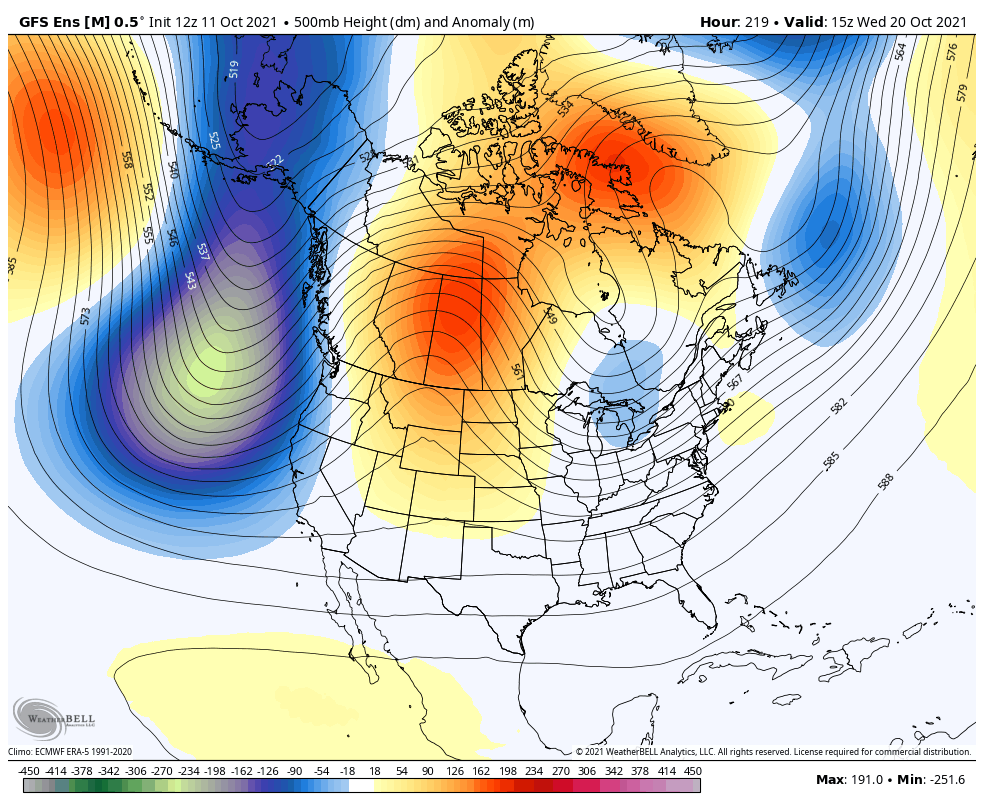 Initially, with the trough off the coast, we should stay dry through the middle of next week but high temperatures may cool back into the 50s at lake level and winds may start to become gusty again from the southwest.

By the end of next week, things look more interesting on the long-range models. Some bigger storms coming off of Japan and heading across the Pacific next week. The trough off the coast is forecast to push farther inland by Friday the 22nd. 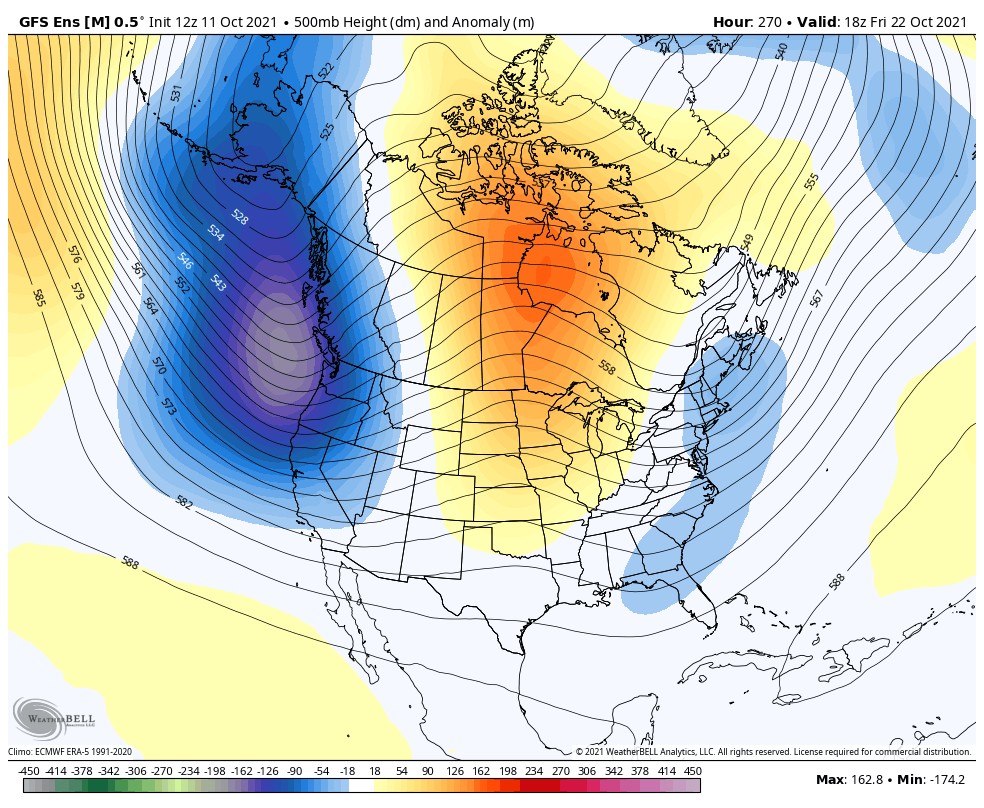 The long-range models all show a stronger system possibly pushing into at least northern CA if not farther south for the weekend of the 22nd. We will be watching this system closely. There could also be another storm behind the 1st for later in the weekend. Here is a look at the 2-week precip forecast on the GFS ensemble mean model. 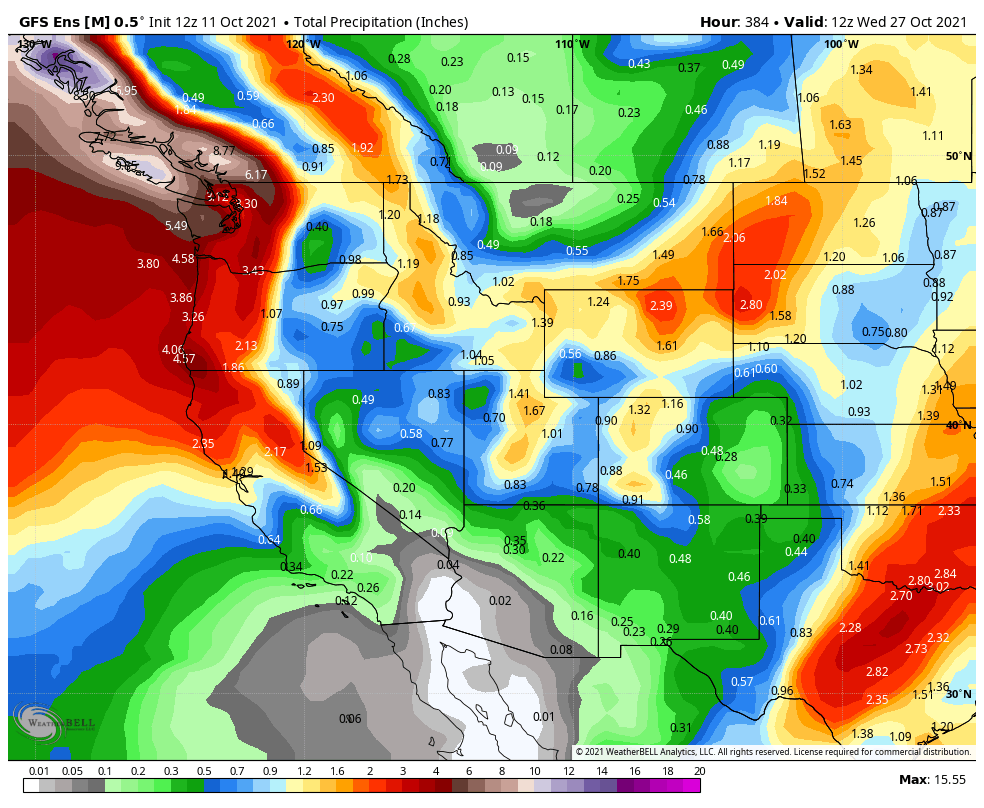 This is still out in the Fantasy Range beyond 10 days. So the confidence is low as things change in the long range as they get closer. But interesting enough to watch as the setup is there and if it pans out we could see quite a bit of snow on the mountains for late October. So stay tuned...

The latest European Weeklies model run has the mean trough position over the West Coast over the next 30s days and shows above-average precipitation chances for northern CA. 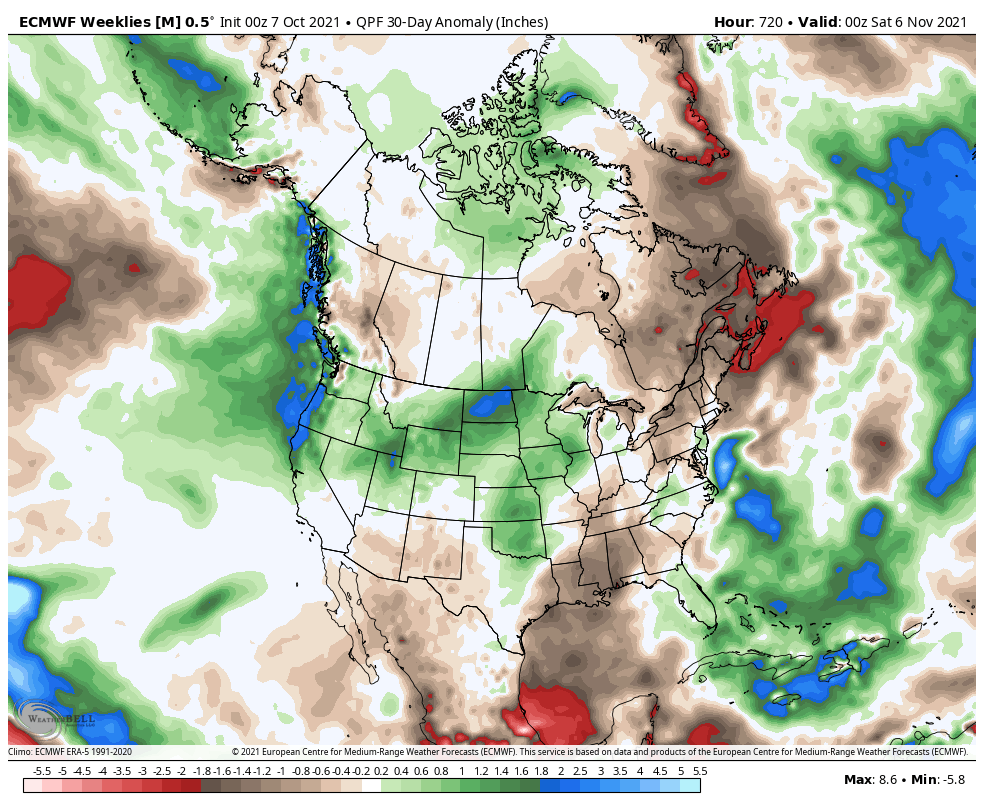 Not uncommon to be teased early in the season during La Nina seasons. But overall La Nina conditions tend to bring below-average precipitation to most of CA throughout the entirety of the season.

We are still putting the final touches on our seasonal forecast. The one-sentence version is, "below average but not as dry as last season", but I'll have a lot more details than that in the main post later this month.

One of the things we're still watching set up is the sea surface temps in the northern Pacific. We've been watching cooling in the Gulf of Alaska down off the coast of CA, and warming out in the central Pacific. If that continues it sets up a classic warm tongue/cold horseshoe look of classing cold PDO pattern. That would be part of the factors we use in our seasonal forecast. 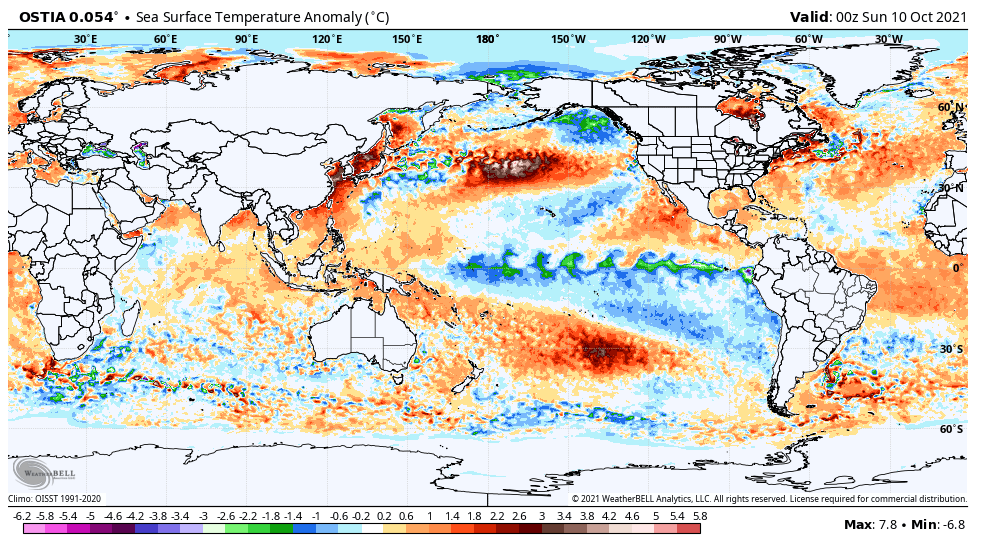 You can see the below-average SSTs along the equator where La Nina conditions are forecast to strengthen. More on all of this in the seasonal forecast. Until then enjoy the early season snow!