Mostly Dry Through The End of November... 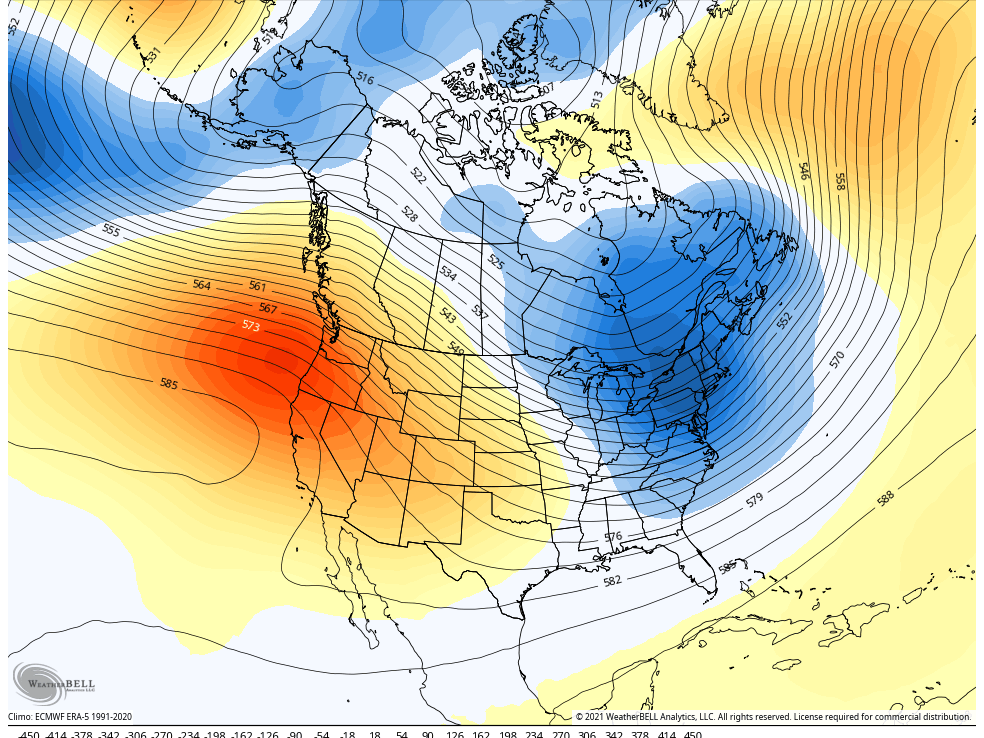 A weak system brings rain & snow showers Friday morning with scattered showers possible into the afternoon before clearing. Dry & cool weather is expected Saturday with slight warming Sunday into Monday. Another weak system could bring scattered showers Tuesday. Then another dry pattern is expected through the Thanksgiving holiday weekend, and possibly beyond the end of November.

Kind of a dismal forecast week. We have had several storms that have brought rain and snow, including the big storm in October that brought a few feet of snow to the mountains. Since then we have had mild spells, mild systems, nighttime inversions, and cloud cover that have helped to melt snow and limit overnight snowmaking operations.

We are still well above average for the date for snowfall and precipitation. The Snow Lab near Donner Summit is still showing more than double the average precipitation for the date. So we have a bit of a buffer going through this dry period. 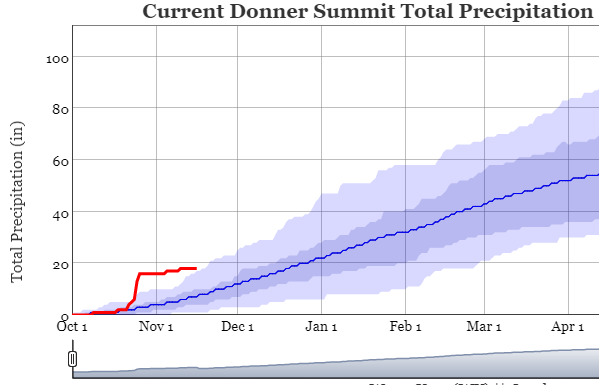 That doesn't help for skiing though with the lack of snow and poor snowmaking conditions. Several ski areas were planning to try and open this weekend ahead of Thanksgiving week. They have all delayed openings. With no natural snow in the forecast and not a lot of snow made yet, even with better snowmaking conditions possible next week I would watch the resorts closely before planning any early season ski trips.

We saw showers move in overnight from the weak system moving through mainly to our north. The forecast models over the last few days kept most of the precipitation to the north of the area with only scattered showers possible for the Tahoe Basin. Early this morning a band of steadier precipitation formed NW of the lake from Donner Summit down to Palisades Tahoe. 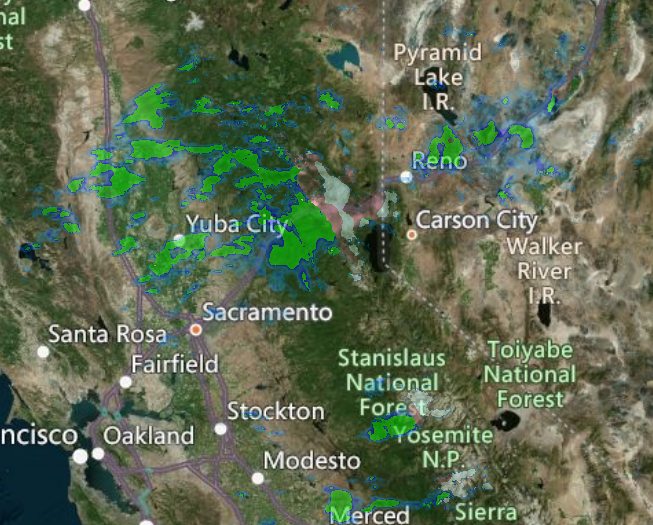 That is bringing heavier precipitation to that area than we were expecting. I went back and looked at last night's model runs and only the 3km NAM seemed to suggest more than a tenth or two was possible. This steady band is also dragging snow levels about 500 feet lower than forecast. We are seeing some snow down to 7000 ft. or just below over Donner Summit with some snow on the roads before sunrise. 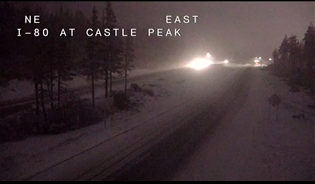 Still a non-event with most areas not seeing more than scattered showers and no accumulations of snow. NW of the lake above 7k we could see a coating up to an inch or two of wet snow through Friday morning. Then we should see lighter precipitation and becoming more showery and scattered as we go through the day. Ridgetop winds gusting from the SW up to 50+ mph Friday morning and then falling through the afternoon.

Highs in the 40s for lake level. Then we start to clear Friday night. We will have to see if the clouds clear enough for enough cooling to make some snow on the mountains, but it could be marginal. 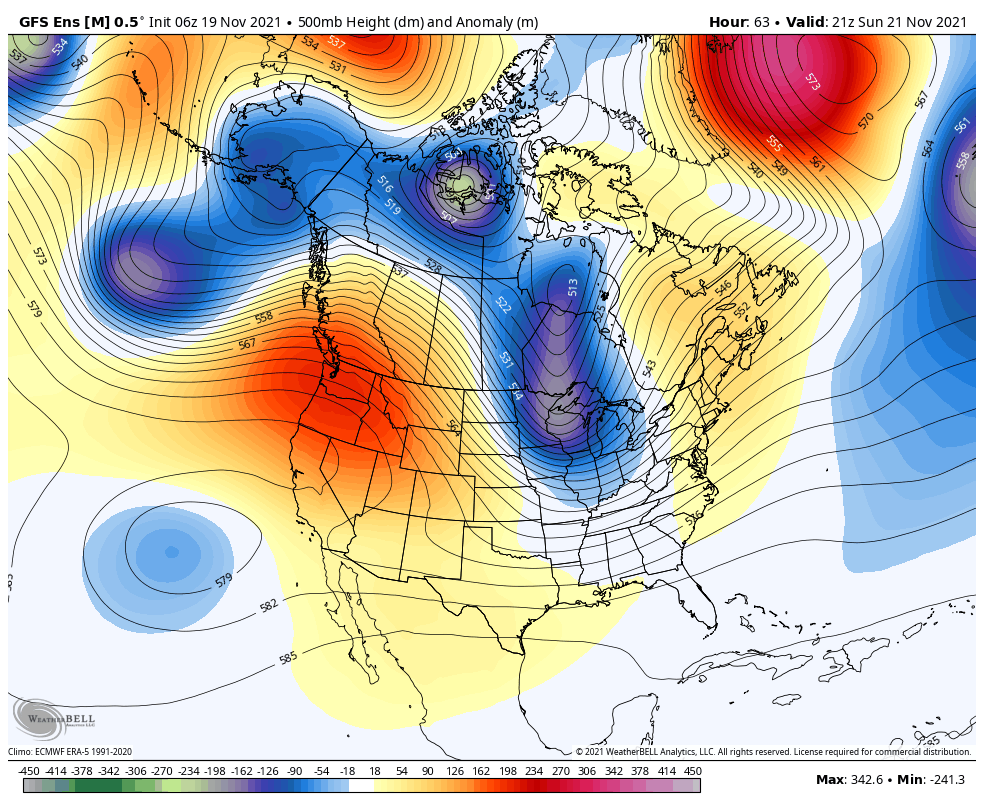 Saturday night doesn't look that cold with lows possibly around freezing, and then inversions could kick in by Sunday night with snowmaking possibly limited to the lower elevations.

The ridge shifts east by Tuesday with a trough swinging through the West Coast. That will bring in some colder air and a weak system will try to move through the Sierra as well. 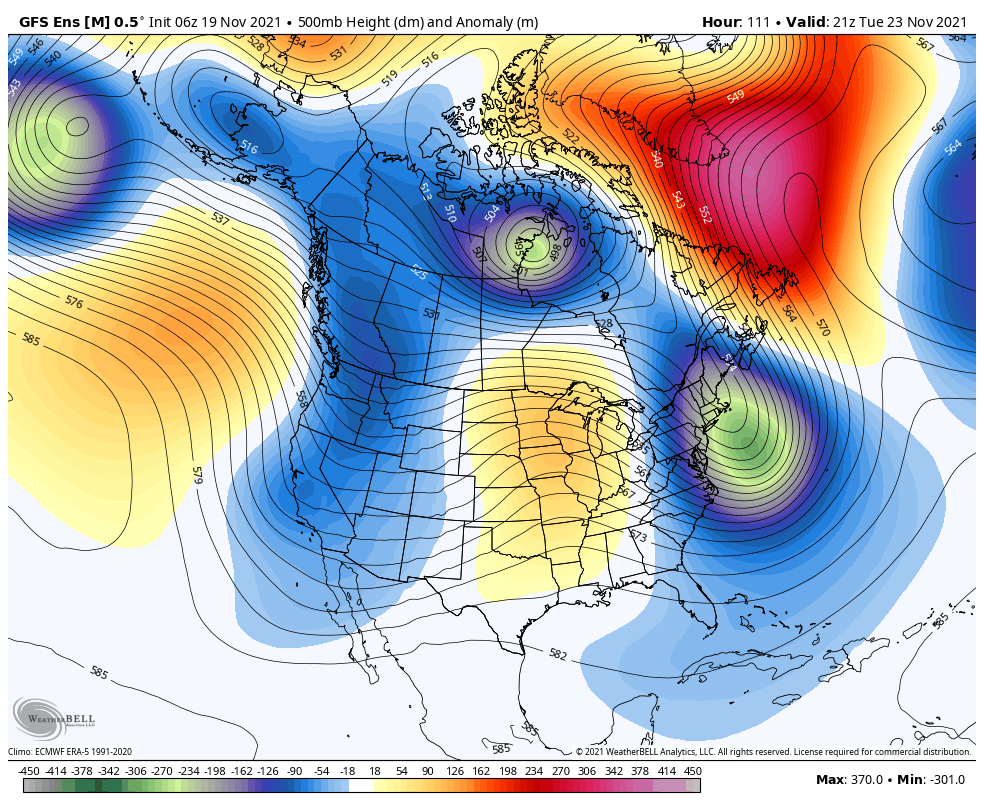 This system looks just as weak as today's with only very light showers reaching the Sierra. Some models even show most of the precipitation staying to our north. Here is a look at the total precipitation forecast from the WPC's blended model for Friday through Tuesday. 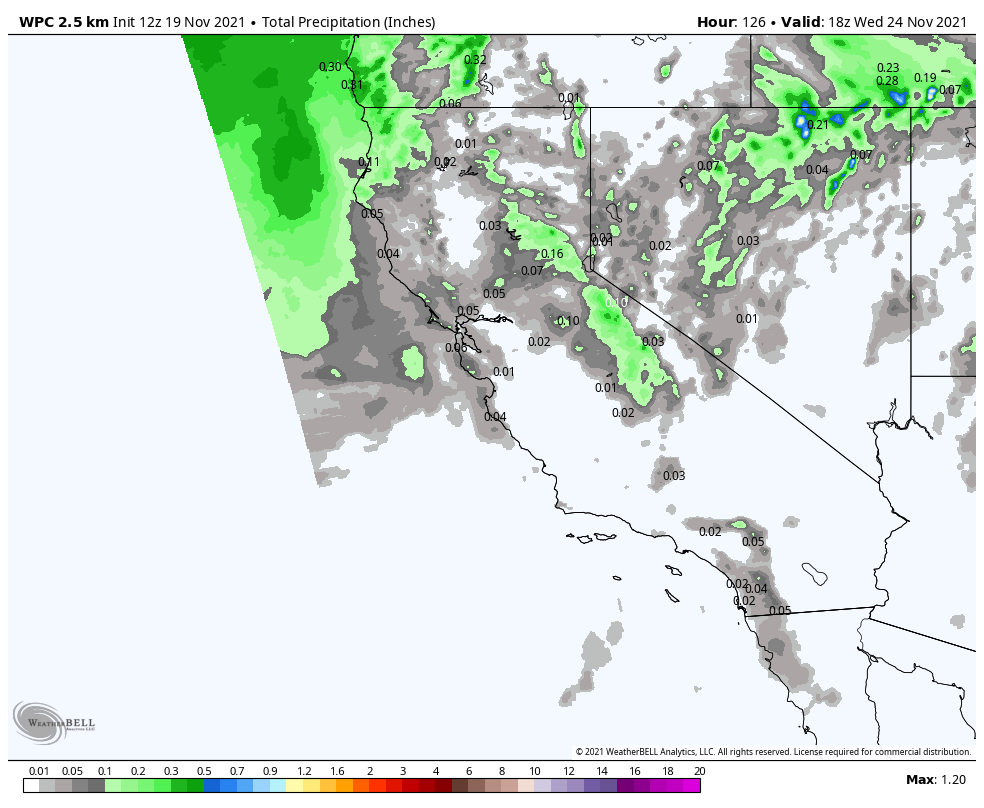 The good news will be the colder air. Highs in the 40s at lake level and 30s for the upper mountains Tuesday. Then Tuesday night lows down into the 20s. Hopefully, we can get in at least one good night of top to bottom snowmaking.

The trough swings through the region pretty quickly. It may stay cool into Wednesday. Then by Thanksgiving Day through the weekend of the 27th-28th high pressure is forecast to build back in along the West Coast continuing the dry pattern and bringing slight warming. 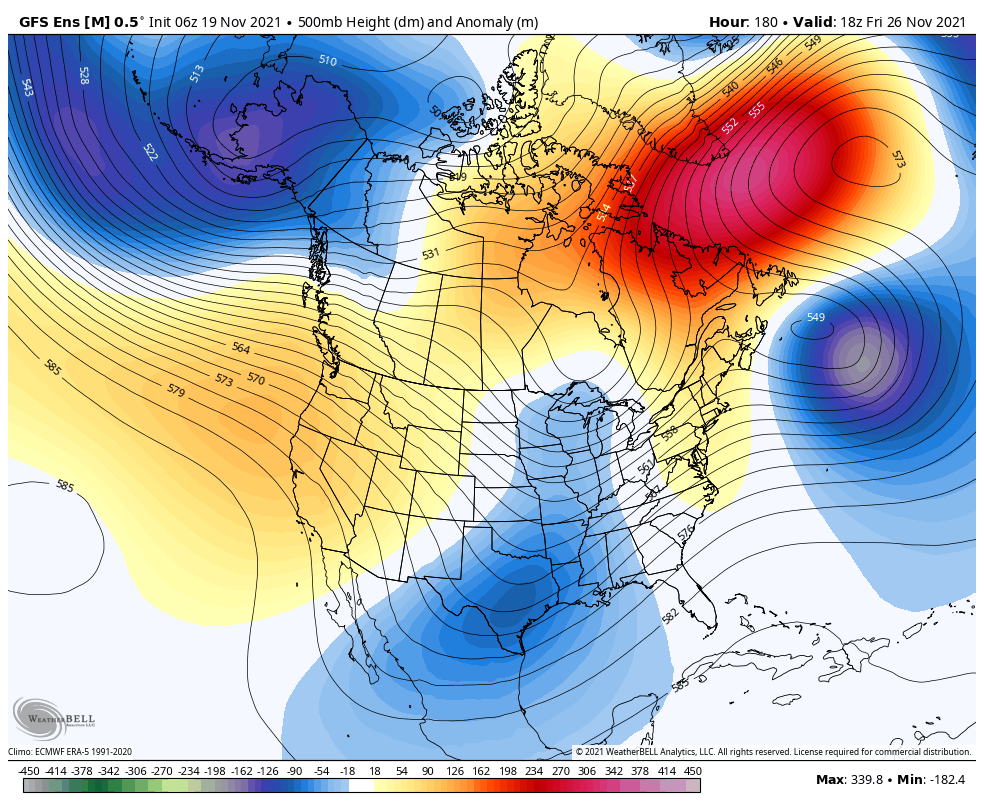 We could see highs warm back into the 50s at lake level and 40s for the upper mountains by the end of next week. The worry is that we will see overnight inversions develop again with colder air at the base of teh mountains and warmer air up top. Possibly warm enough that snowmaking is limited to the lower elevations for several nights...

Forecasting snowmaking is always tricky and we will just have to keep watching to see how much snow can be made and how much if any terrain the ski resorts can open by Thanksgiving weekend.

I know that there has been a lot of hype this week from the operational GFS runs that were suggesting bigger storms starting around the 27th-28th and another for the 29th-30th, and then possibly continuing into the 1st week of December. Hopefully, none of you bought tickets on the hype train yet...

In my last post on Wednesday, I cautioned jumping on board as the other models and their ensembles were showing the opposite pattern with the dry weather continuing. Although the teleconnection patterns look like they could start to shift by the end of the month, I didn't think they lined up for a big flip in the pattern yet, but of course, I'm a snow lover and always hopeful the rogue GFS model was onto something.

Over the past 24 hours, the GFS model has been delaying the onset of the pattern change and storms arriving more and more. This morning the operational GFS model holds off on any storms of significance until at least December 3rd. This makes sense with the other models being consistent in showing the ridge remaining near the West Coast.

The GFS ensemble mean model which takes the average of all of the ensemble members is still showing a shift in the pattern around the end of the month with a deep trough over the West Coast by the 1st which would open the door to storms. 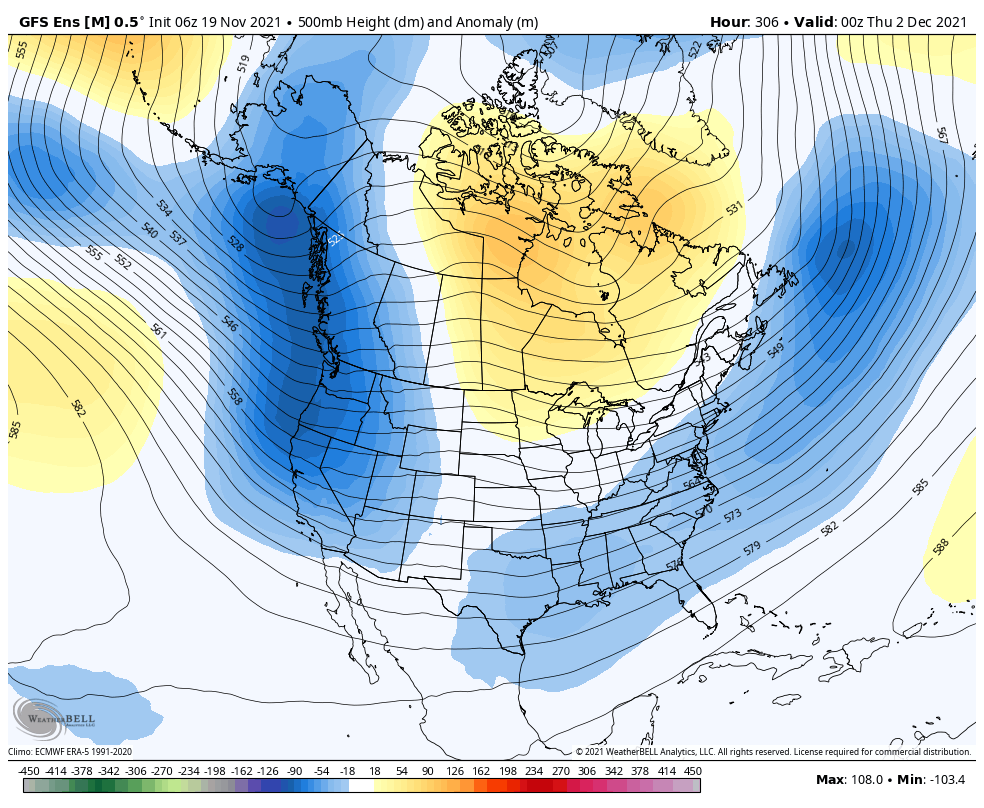 That same model shows a wetter pattern developing during the 1st week of December. 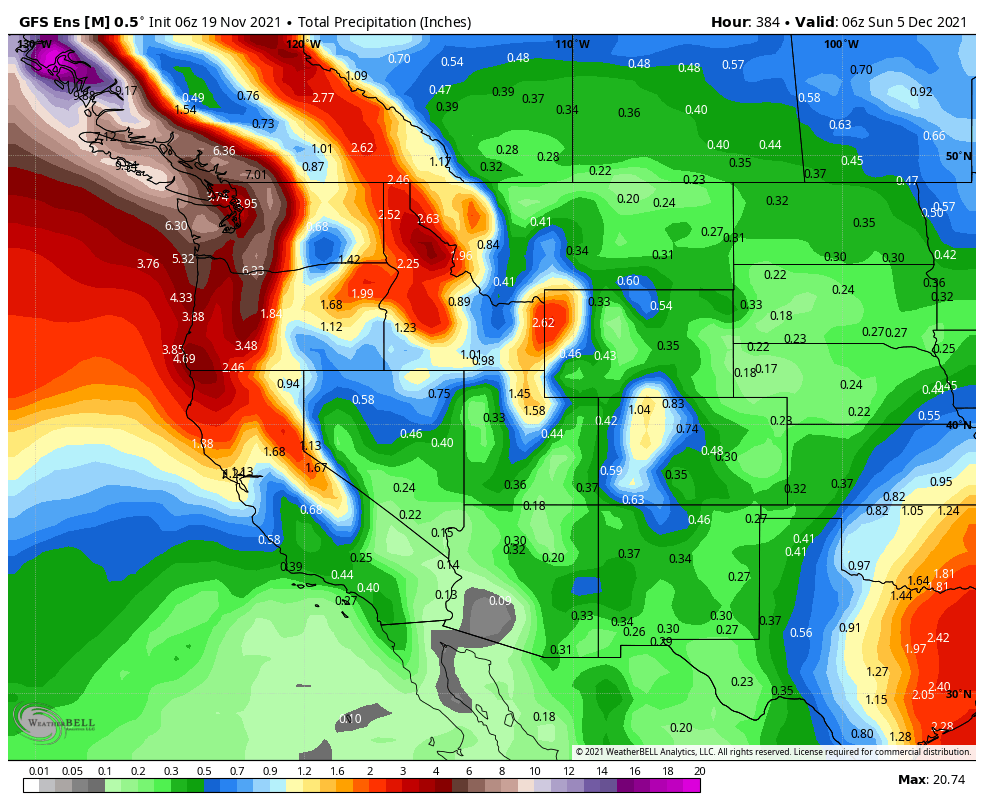 BUT, the European and Canadian models and ensembles continue to show the ridge sitting near the West Coast into the 1st week of December and blocking storms. 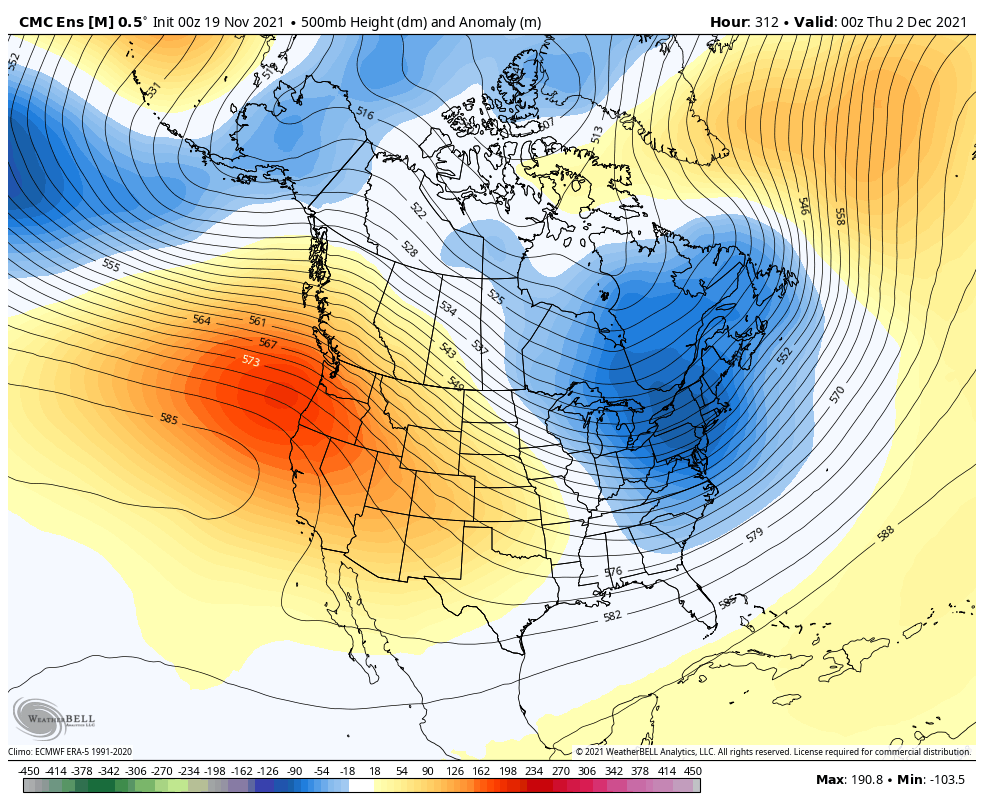 Their ensemble mean models show very little precip this far south through December 4th. Most of it is from today's and Tuesday's weak systems. 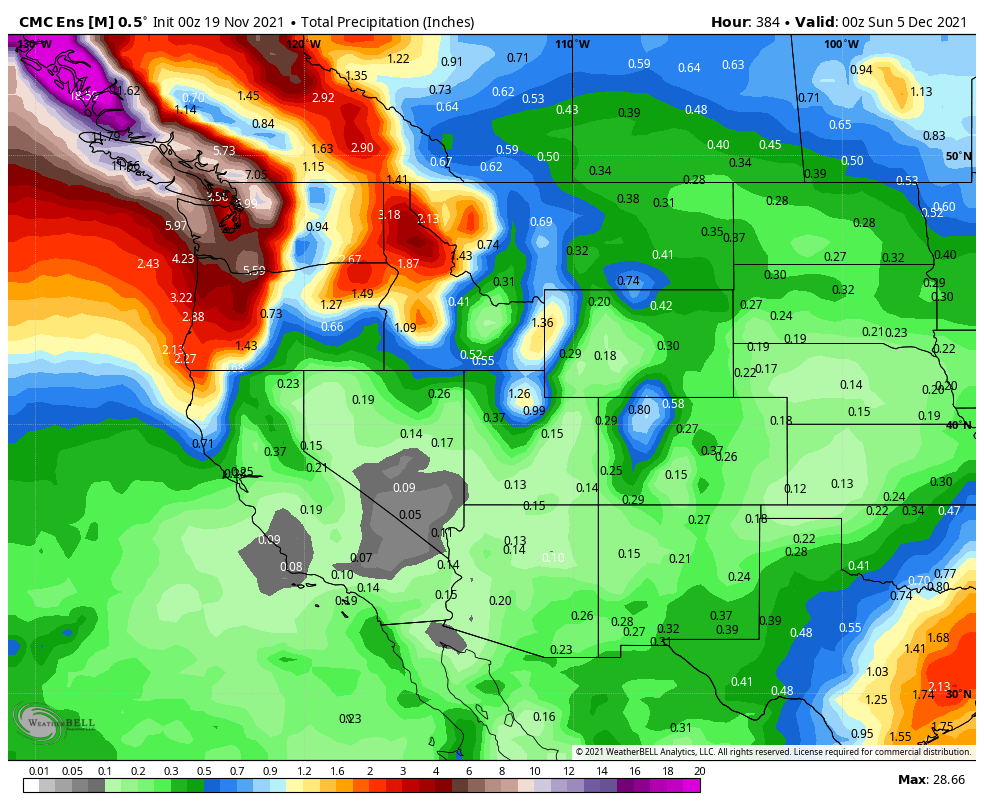 Their teleconnection forecasts do start to show the PNA (Pacific North American) pattern starting to flip negative during the 1st week of December. That could be a sign that we will eventually start to see a change in the pattern. Maybe the GFS was just way too fast with a pattern change and is now delaying it more in line with the other models. It could continue to delay or hopefully the other models speed it up and they meet in the middle during the 1st week of December.

We will continue to watch the patterns for any solid signs of a change. Something more solid than just hoping the GFS is right. It's rare that a single operational model is right when the other models with the support of their ensembles are showing the opposite, and the teleconnection patterns aren't lined up for big storms. You can go back to Wednesday's post where I talk about the -NAO/+PNA pattern.

If you are talking to your friends, family, & colleagues, please mention my words of caution when I have them, even if your eternal optimism and desperation make it hard to utter the words. Over the last 16 seasons of forecasting I've noticed that on occasion when I go the opposite way of other forecasts and they end up being wrong, I get blamed for blowing the forecast as well. Guilty by association I guess.

Lol, I really don't care that much. I don't like to get our reader's hopes up until we have good confidence. I too am often guilty of reading between the lines/models in times of desperation looking for the positive signs of potential snow and getting excited. Mike is the opposite and thinks the world is ending when it doesn't snow for a few days. We are a good balance :).