Transitioning From Winter Back to Spring...

The last round of isolated snow showers fall Wednesday. Then mostly sunny for the next 7 days with warmer temperatures. Another cool down with some showers possible later next week, and possibly again the week after.

We have had a cold and wintry first half of the week with several systems that rotated through bringing us snow showers. There are some lingering clouds and isolated snow showers Wednesday afternoon as the last system moves east.

You can see the snow on the mountains (the white that isn't moving) left in the wake of the cold storms. We were expecting a few inches at lake level and 3-12+ inches on the mountains over the last few days. The Snow Lab is reporting 11 inches total and 15 inches fell on the upper mountain at Palisades.

Much less fell to the south in the Central Sierra. The only mountains still open are Mammoth and Palisades, but Palisades is only open Fri-Sun through the end of the month. So no one is able to shred the fresh snow this week that is sitting on the mountain. 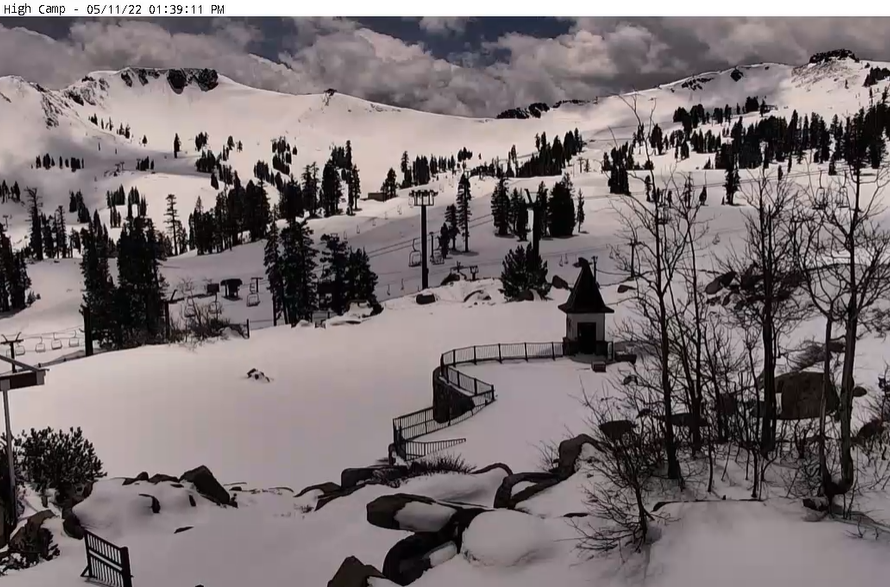 Unfortunately by Friday the temperatures will be warmer and the snow will be wet. But these storms at least preserve and add to the snow on the upper mountain to help keep things going through 5/30.

You'll notice on the snowfall reports that we are now above average for snowfall for the season. With the crazy way it fell early and late in the season, the snowpack is still well below average for the date at only 26% for the area. 10" is the average for May at the Snow Lab which is now up to 11" so far this season. I'll have more graphs and stats at the end of the month.

We will start to warm up on Thursday but it's still cool with highs in the 50s for lake level and 40s for the upper mountains. Then warming into the 60s & 50s by Friday through the weekend. We could see breezy west winds but nothing concerning right now. 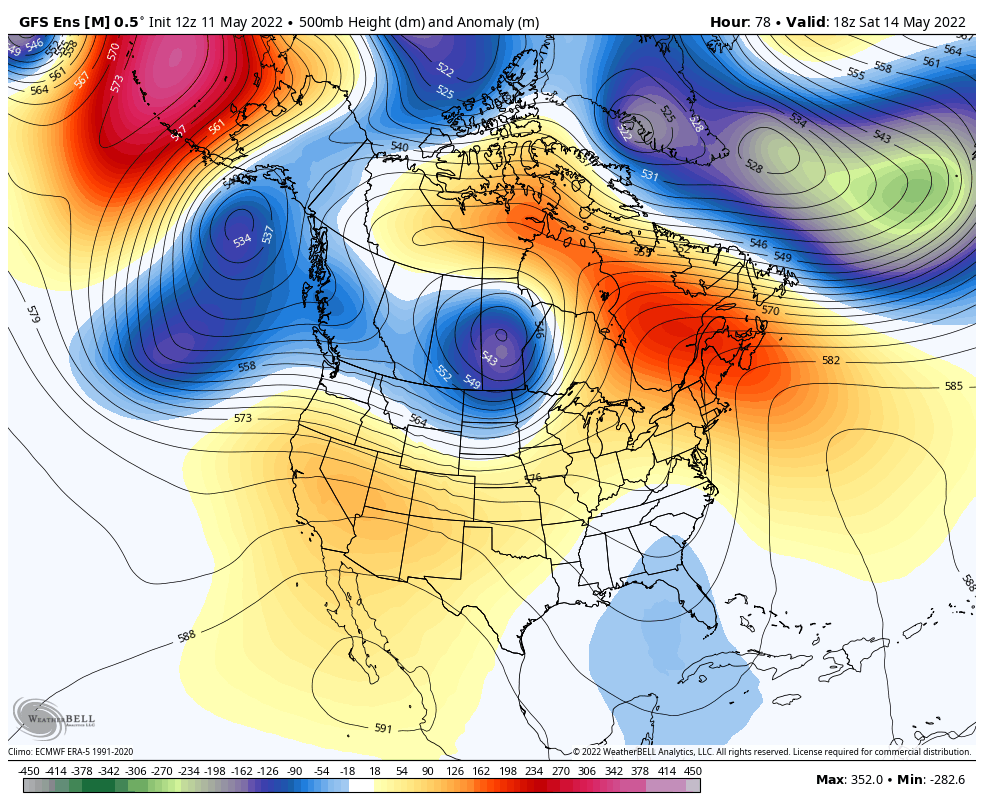 The drier and milder pattern may continue through at least next Wednesday the 18th.

Believe it or not, the long-range models show an active Pacific NW through the next 2 weeks, with cool troughs possibly digging south into CA later next week and the following week. 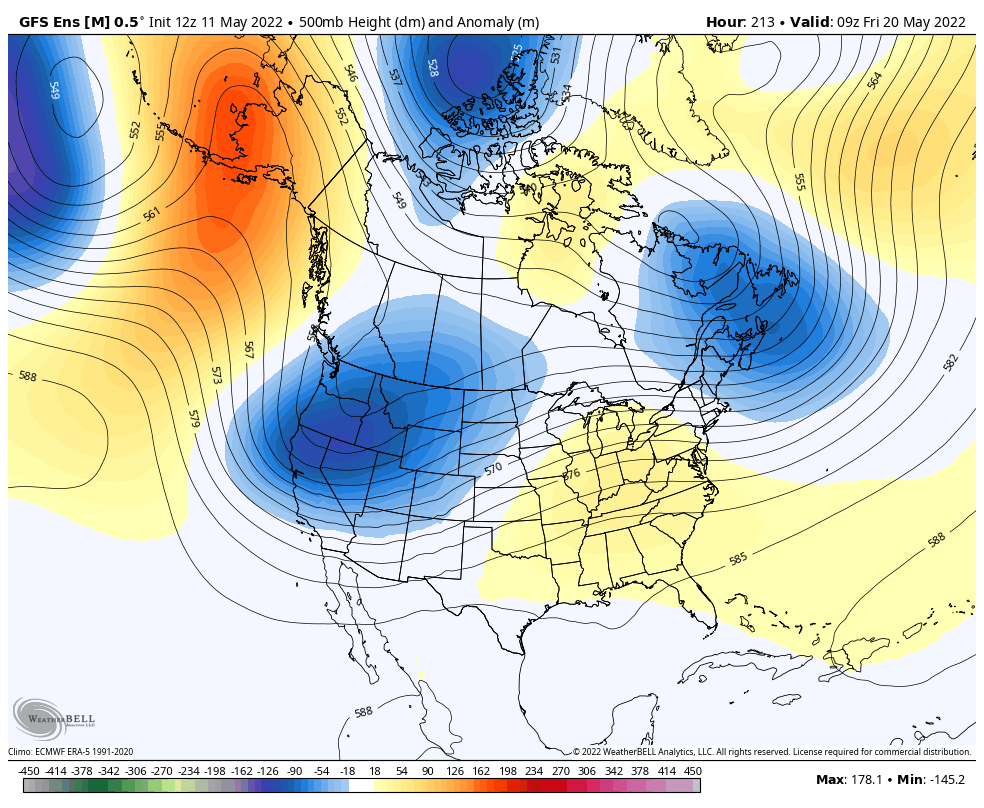 That could bring another round of colder air and a chance for the storm track to dip farther south into the northern Sierra with some showers. Here is a system on the latest GFS model run for next Thursday the 19th. 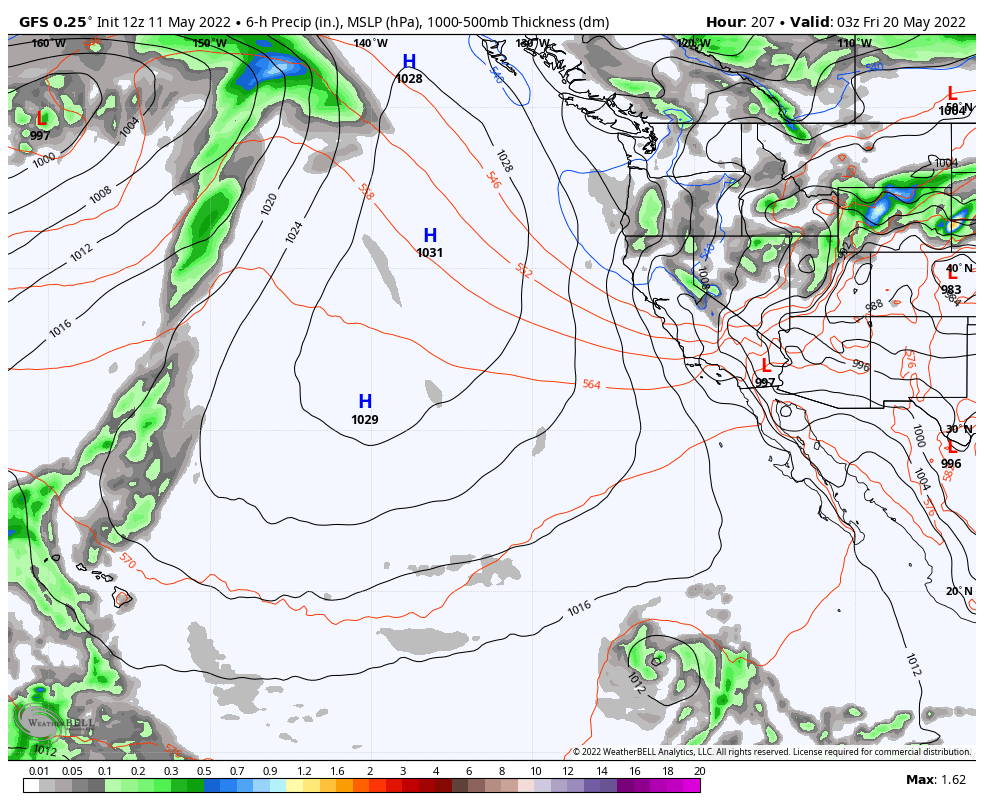 And another system is suggested for the following week with another trough. The 6z GFS showed an impressive system for late May. 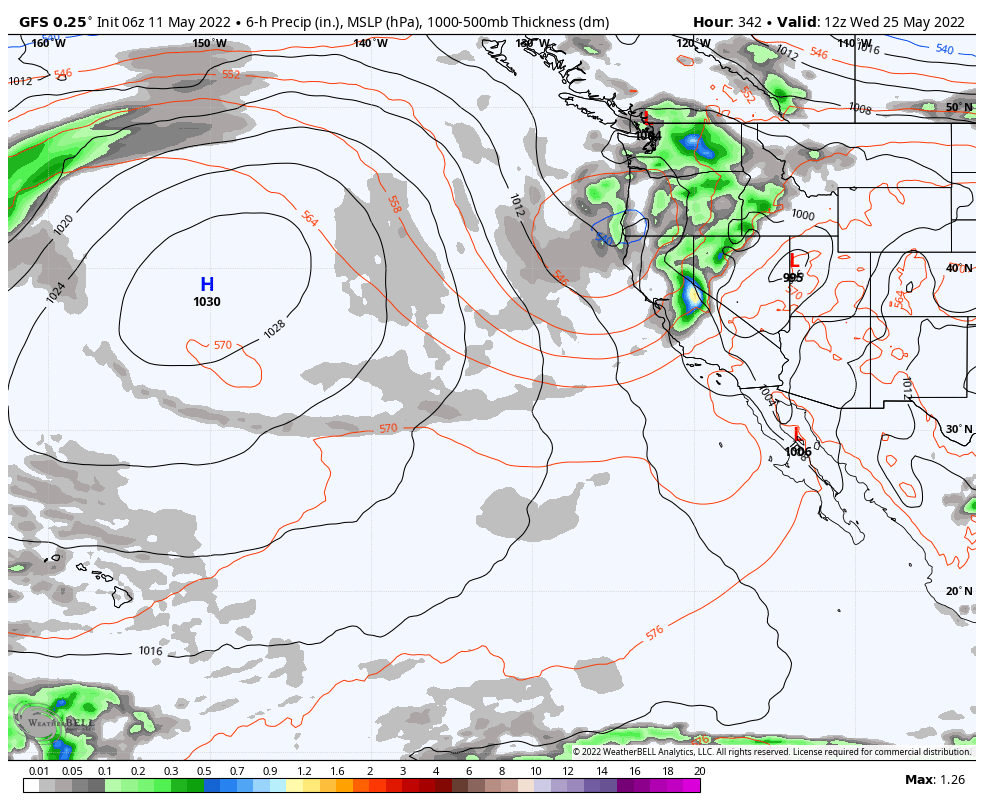 We need the water so no complaints, other than complaining we didn't see this pattern during the heart of the winter. We will keep an eye on the long-range forecast and I'll let you know if we could see any additional precipitation or snowfall. Overall it doesn't look dry for the West, especially to our north... 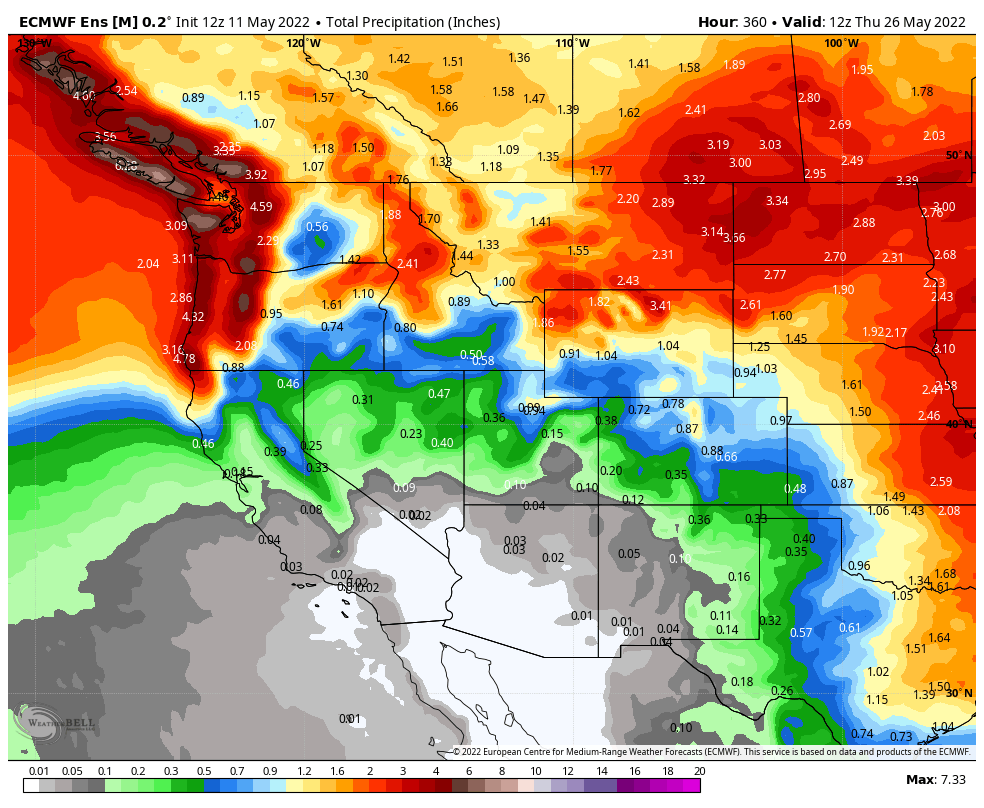 ...and some areas will continue to see accumulating snowfall. 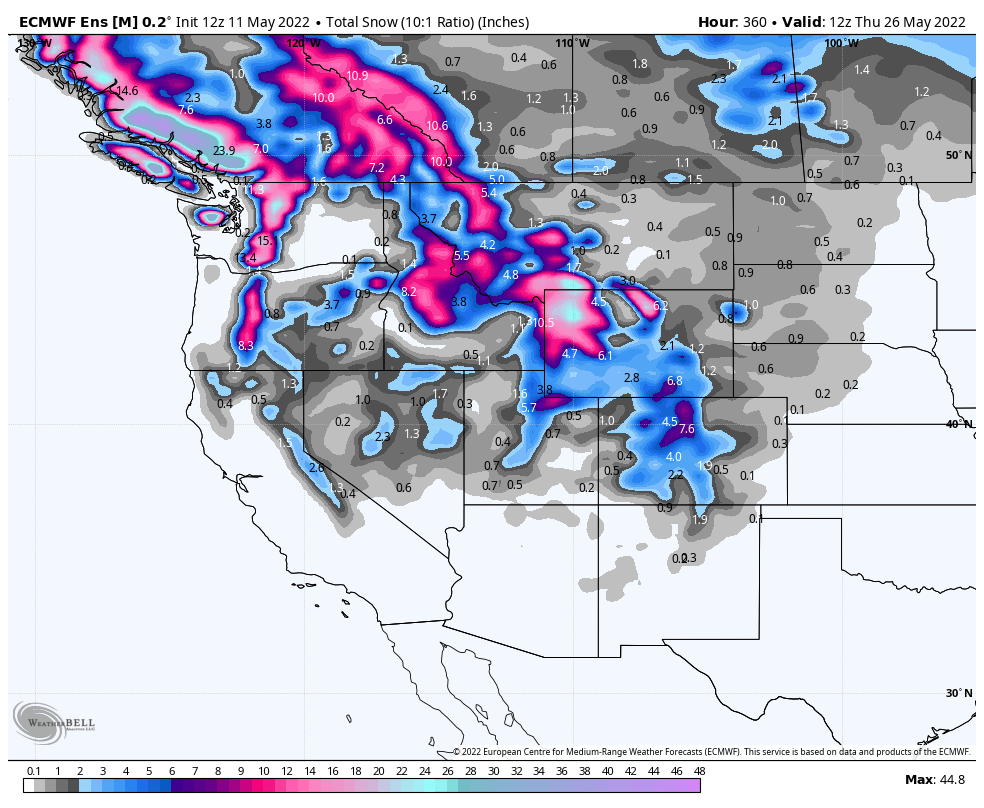 The 2010/11 spring season saw the troughs continuing to push into CA with storms and measurable snow falling into June. If it has started to feel like the spring of 2011 during April and now May, it may partly be due to the change in SSTs with colder water off the coast... 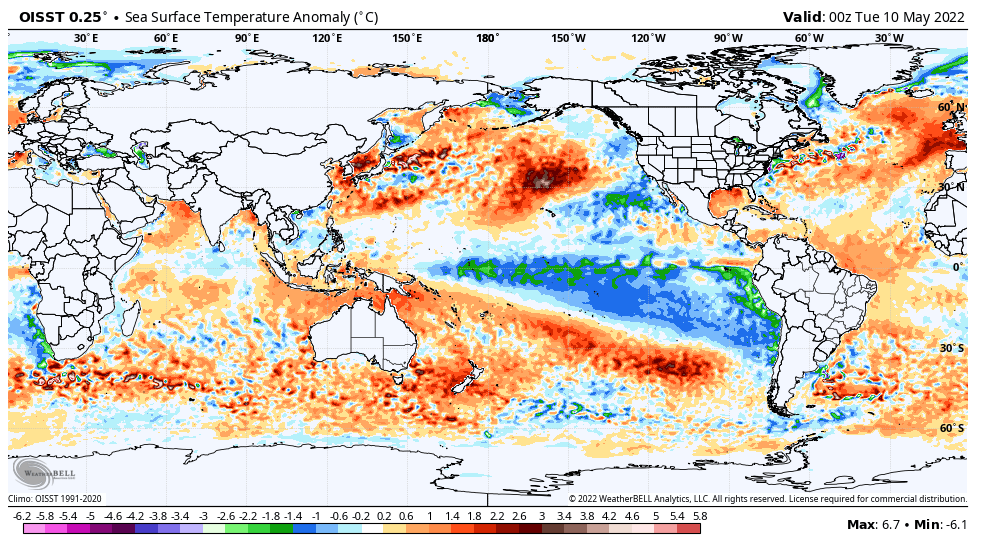 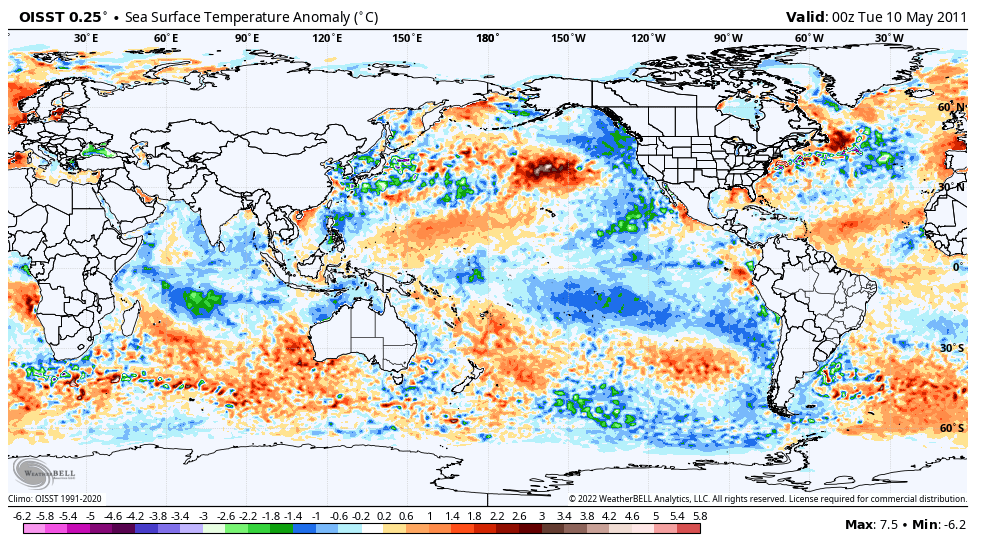 Will we see some measurable snow on the mountains later this month and into June again? We'll see...