Back to Back Snowstorms...

Mostly sunny Tue & Wed with increasing winds Wednesday. A fairly strong and cold storm moves in later Wed night into Thursday night. A quick break Friday and then another fairly strong storm moves in Saturday and lasts through Sunday. Next week the weather pattern could be quieter, at least to start.

If you like sunny skies with light winds and temperatures above freezing, then you'll like Tuesday and you should get outside to enjoy it before things start to change on Wednesday.

Wednesday will also feature highs in the 30s on the mountains to around 40 degrees at lake level, but ridgetop winds will be increasing from the southwest with gusts up to 60-70+ mph by afternoon. That could affect some upper mountain lift operations at exposed mountains.

No changes in the thinking for the Thursday storm. It's a cold storm with a front that is going to tap into Pacific moisture from a system well off the CA coast. Those are the ingredients for a nice helping of mountain powder.

Looking at our forecast radar map, the snow showers could push into the Tahoe region between 2-6 a.m. on Thursday.

Thursday will be a storm day with ridgetop winds gusting in excess of 100 mph from the southwest and heavy snow during the day. Not a great day for travel or skiing. The heaviest snow should move through by Thursday evening with snow showers winding down into Thursday night. Then clearing by Friday morning.

Snow levels could start out around 5000-6000 ft. early Thursday which is below lake level and snow for everyone in the Tahoe region. Then falling very low into Thursday night, down below 1,000 ft. by the end. That is a cold storm and the snow will become quite powdery on the mountains through the end of the storm with snow ratios in excess of 20:1 for the higher elevations.

The total precipitation forecasts have been very consistent. The average is up around half an inch from yesterday and is sitting around 1.9 inches down the Sierra crest. Here is a look at the WPC's blended model forecast. 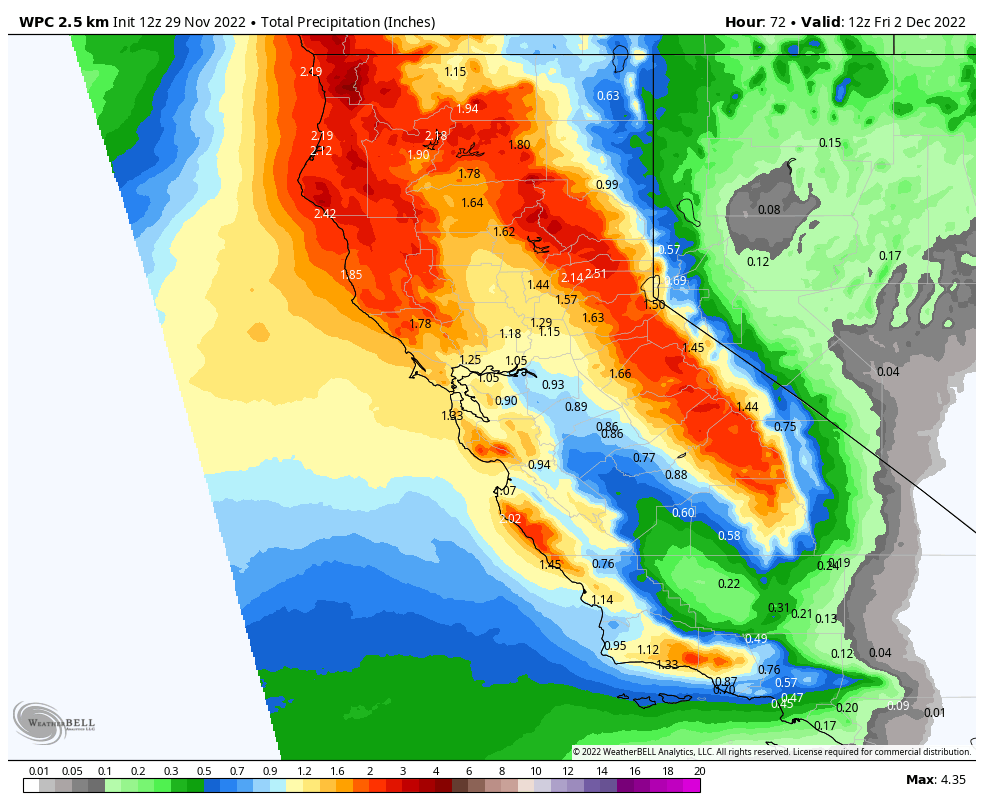 My updated snowfall forecast calculation is up a couple of inches best on the slightly wetter model average this morning. The final forecast will be out Wednesday morning. 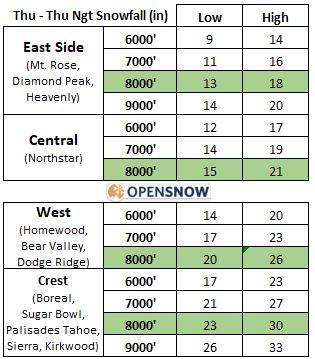 You should also be looking at our automated proprietary snowfall forecasts using our in-house formulas. Some of my methods were used in creating those forecasts. I just try to out forecast the models for each storm using my experience.

Friday should be a good powdery day. It will be cold with highs only in the 20s on the mountains and low 30s at lake level. The winds drop off and the sun comes out. A classic Tahoe pow day.

The 2nd storm is not into the 5-day forecast window so we will start to look at the details for the storm more closely today.

The center of the low pressure with this system is forecast to drop down just off the West Coast instead of moving inland to our north like with the first storm. 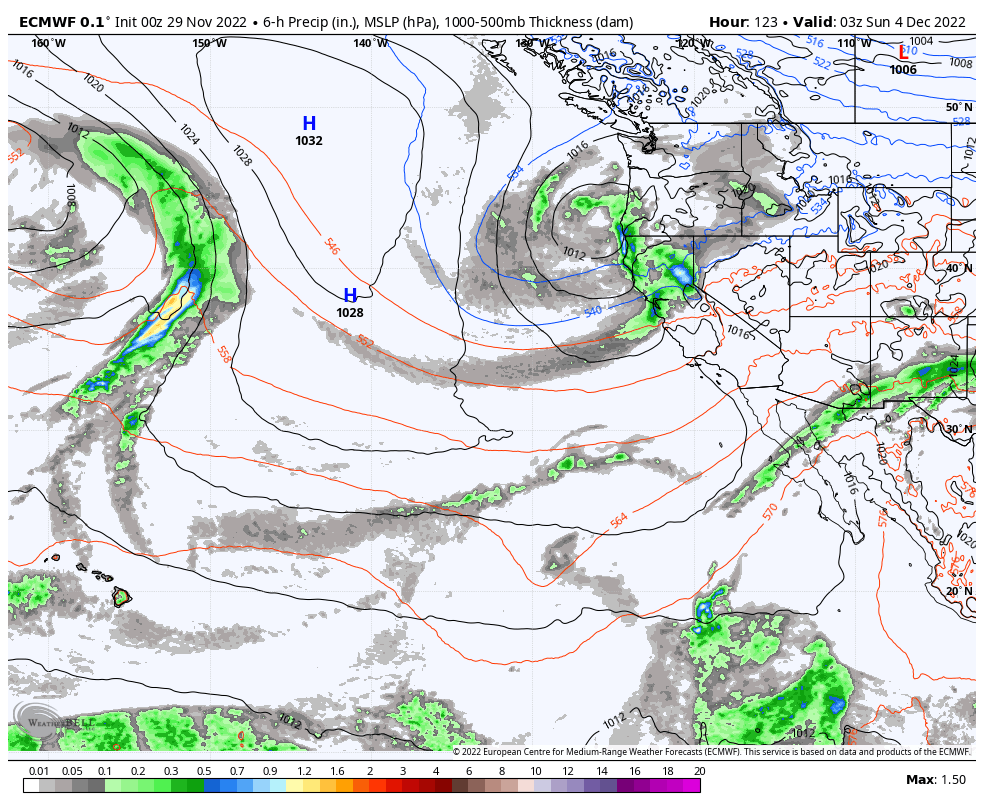 The snow could move in by late morning on Saturday with the heaviest snow expected Saturday night into Sunday morning. Snow showers could linger into Sunday evening before clearing. Ridgetop winds gusting up to 60-70+ mph Saturday and then coming down into Sunday afternoon. Highs in the 20s for the upper mountains and 30s for lake level.

The flow may remain SSW flow on the east side of the low may last longer with this system as it moves south down the CA coast. The snow levels may start near lake level and could then stay in the 4500-5500 ft. range through most of the storm before dropping at the end. So cold enough for all snow around the basin but not as cold and powdery as the first really cold storm.

The range in forecasts for total precipitation Tuesday morning is 0.8 - 2.5 inches down the crest. The GFS model is the wettest this morning. So we have some fine-tuning to do as we get closer. The total model average is currently around 1.55 inches. The WPC's blended model through Sunday night shows a 4-day total of around 3.5 inches west of the lake down the Sierra crest. 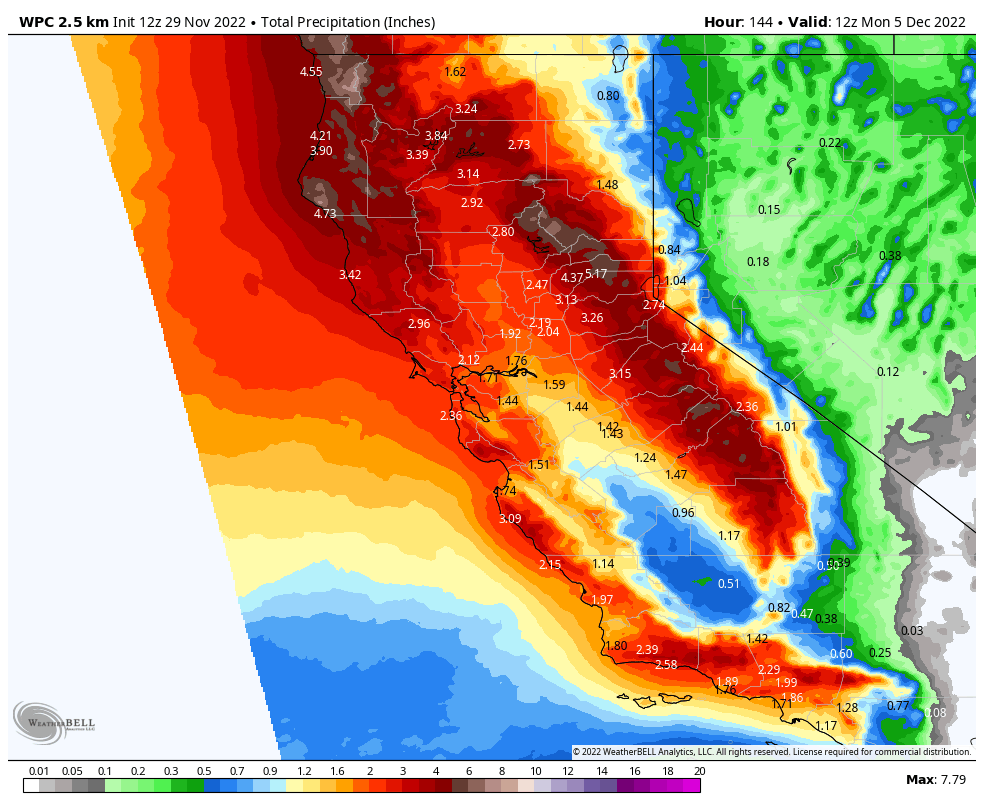 There is good confidence in back-to-back 1-2+ ft. storms for the mountains. Looking at the trends on the EPS model for the last several runs, you can see each run is on top of the other. Very consistent model forecasts for storms this wet.

That builds confidence in the forecasts. Here is my initial snowfall forecast for this storm. 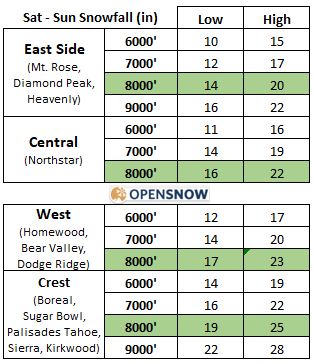 That would be 1 - 2.5 feet with the first storm and 1-2 feet with the 2nd storm, for a possible total of 2-4+ feet of snow on the mountains between now and Monday morning. Let's hope this forecast holds and only trends up if the trends change!

The weather pattern is expected to quiet down at least for the first half of next week as high pressure nudges into the West Coast. 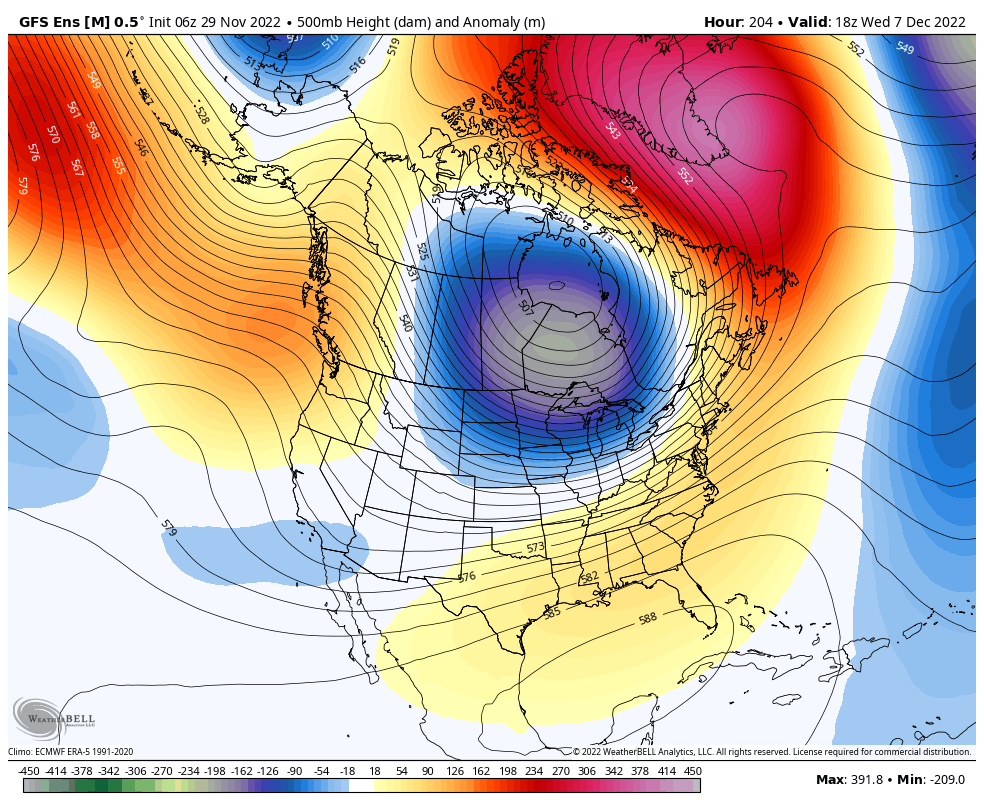 We remain on the cold (east) side of the ridge so temperatures should stay fairly cold with highs into the 30s at lake level. That should keep the snow in good condition behind the back-to-back storms.

Beyond day 10, between the 10-12th of December, the long-range models continue to suggest that troughing could return to the West Coast through mid-month. 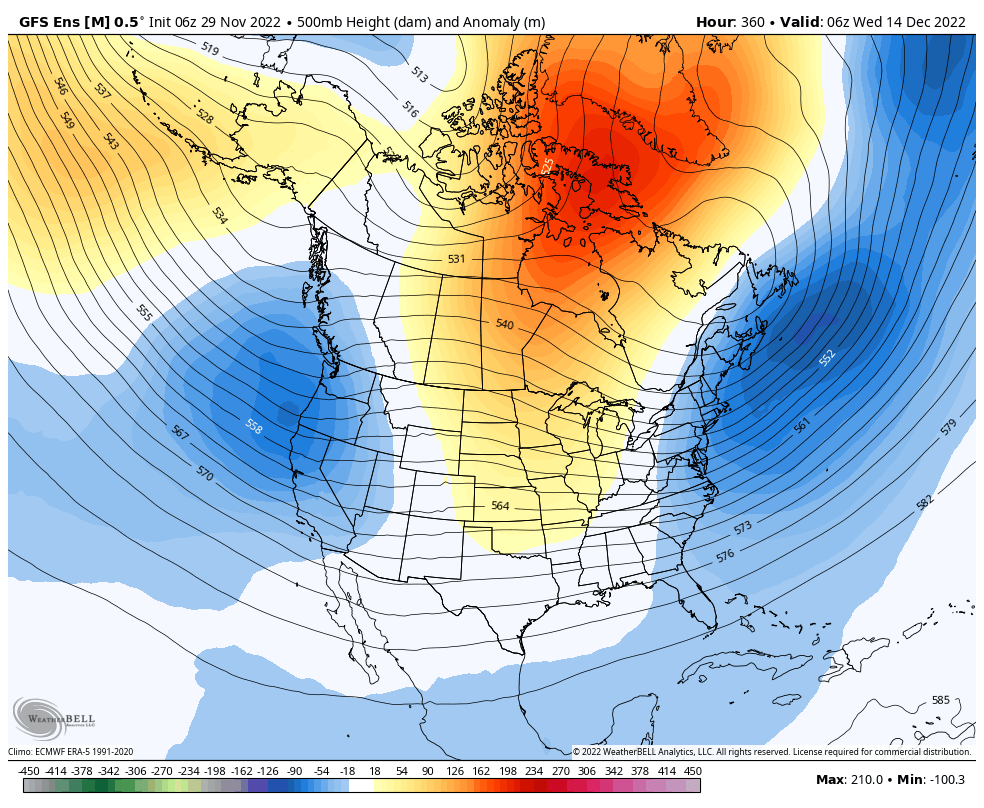 If that trend verifies it would re-open the storm door to storms moving into the West Coast and northern CA. Still plenty of time to watch the trends and plenty of snow on the way before then.