Mostly sunny Wednesday with increasing winds. A storm moves in later Wed night and lasts into Thursday night before ending. A quick break Friday and then another fairly strong storm moves in by Saturday afternoon and lasts through Monday. Then we could see a break for at least a few days.

Wednesday we will have mostly sunny skies with highs into the 30s to near 40 degrees at lake level. It might seem like a nice day, but if you are up at the top of the mountains the ridgetop winds will be increasing from the southwest through the day. Gusts up to 70+ mph by afternoon could close some exposed upper mountain ski lifts.

All systems are go for the Thursday storm. A classic Tahoe 1-day dump of 1-2 feet of snow for the mountains. The snow should begin to move in after midnight through the early morning hours, starting NW of the lake near Donner Pass and moving southeast through the morning. Here is a look at our forecast radar.

The heaviest snow is expected during the day on Thursday, especially during the afternoon. Then transitioning to snow showers Thursday night and ending by sunrise Friday. Ridgetop winds gusting up to 100+ mph from the southwest Thursday. That will make skiing and travel difficult or impossible at times with whiteout conditions and closed ski lifts.

Snow levels will likely hover in the 5000-5500 ft. range through the heaviest precip as warmer air associated with the moisture gets drawn in off of the Pacific. But low enough for all snow below lake level in the Tahoe Basin. Then dropping quickly behind the front Thursday evening and night, down below 2000 ft. by the end. That will mean several inches of powdery snow on top to end the storm.

No changes to the precipitation forecasts Wednesday morning. The average down the crest is still around 1.8 inches. Here is a look at the latest WPC blended model forecast through Thursday night. 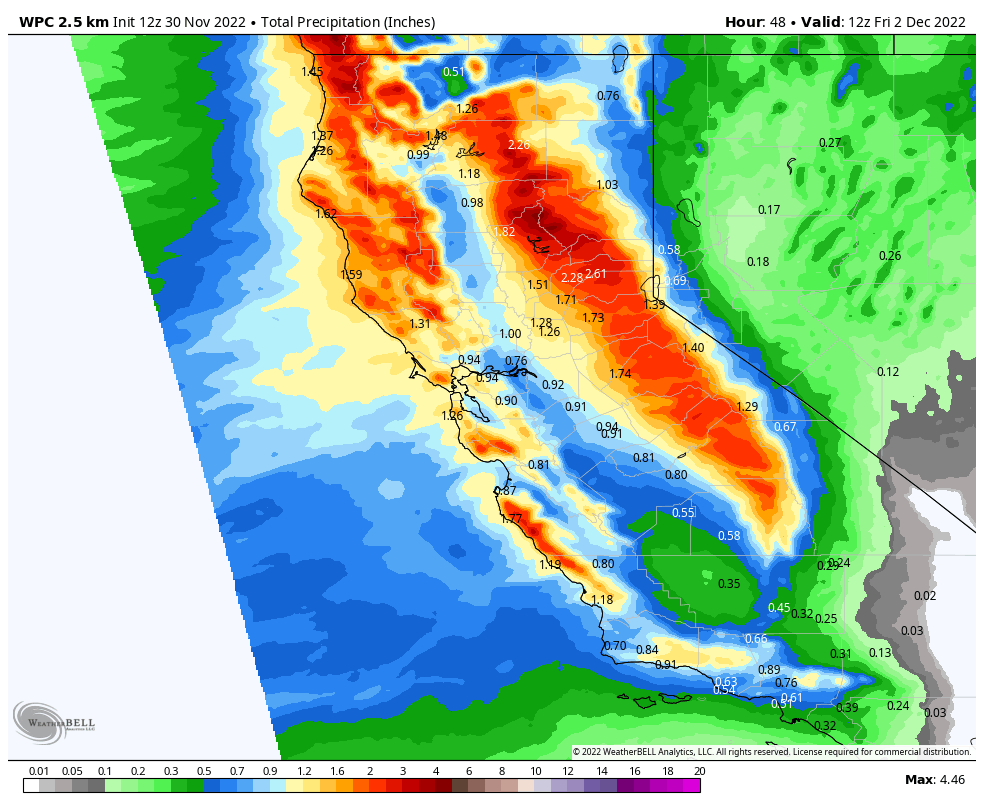 Also no real changes to my snowfall forecast for the storm. It's final forecast day for this storm, so here is my final forecast that I'll be graded again on Friday after we tally up the snowfall reports. 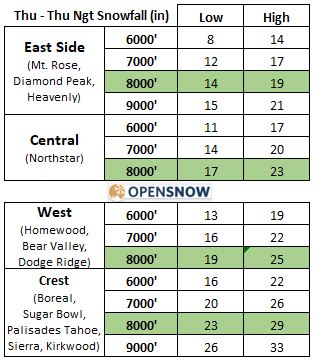 Friday is still on track to be a great powder day. The sun comes out and it stays cold as the winds drop off. Highs are only in the 20s to near 30 down at lake level. That should keep the snow soft all day.

There are some changes with the next storm. Mainly to slow it down some and to extend the duration into Monday.

Another cold low-pressure system will drop down from the north on Saturday. This time a bit more off the coast over water. The moist system well west of CA that helps to feed the Thursday storm will still be off the coast Saturday. The latest model runs show this system being drawn northeast into CA by Saturday afternoon. 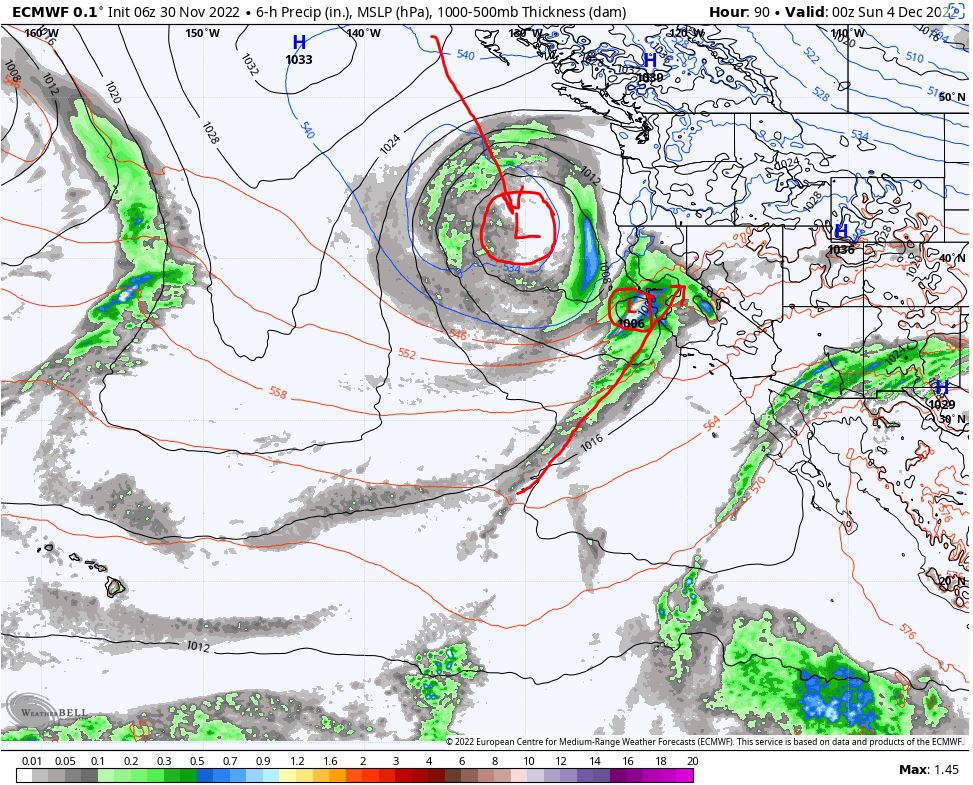 The latest model runs show snow moving back into the northern Sierra sometime between noon and 5 PM on Saturday. We have the warmer part of the storm Saturday night into Sunday with the moisture stream being drawn in ahead of the center of the low-pressure system along the coast.

Snow levels look low enough for all snow below lake level but could hover between 4500-6000 ft. through the region and bounce around depending on the intensity of precipitation through this period. Winds should also be gusty Saturday into Sunday but maybe only 40-50+ mph from the southwest if the latest model runs are right.

Sunday night into Monday the moisture stream shifts south and the low-pressure system spinning off the coast moves inland through northern CA. This would continue snow showers through Monday and possibly not ending until Monday night. This would also bring in colder air with snow levels possibly between 3000-4500 ft.

This is a 48+ hr storm vs the 24 hr or less storm on Thursday. But overall total precip amounts could be around the same. Some models are very wet with this 2nd system with the moisture being drawn up Saturday, and other are drier and keep it to our south. So a big spread today for total precip forecasts between 0.8 - 2.6 inches. We need to fine-tune that and get agreement before a confident forecast. 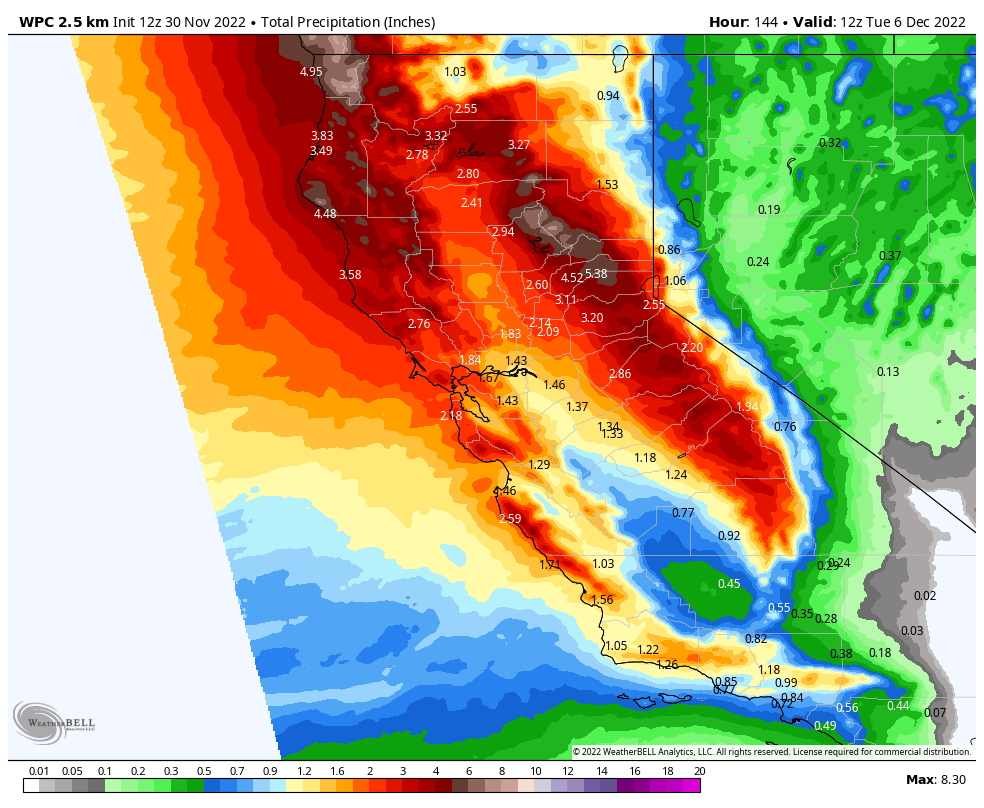 Based on the model average here is my updated snowfall forecast for the 2nd storm. 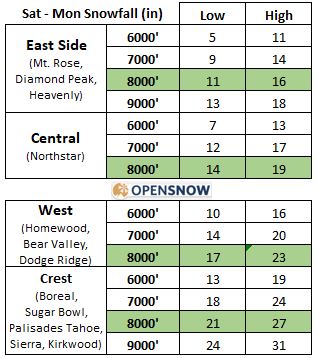 As I said, this forecast could change if the drier or wetter model scenarios win out. Either way, another storm sometime Saturday into Monday that should bring another decent shot of snow to keep building our early season base!

By Tuesday through next Thursday the 8th we should have a drier pattern but staying cold as high-pressure nudges into the West Coast. 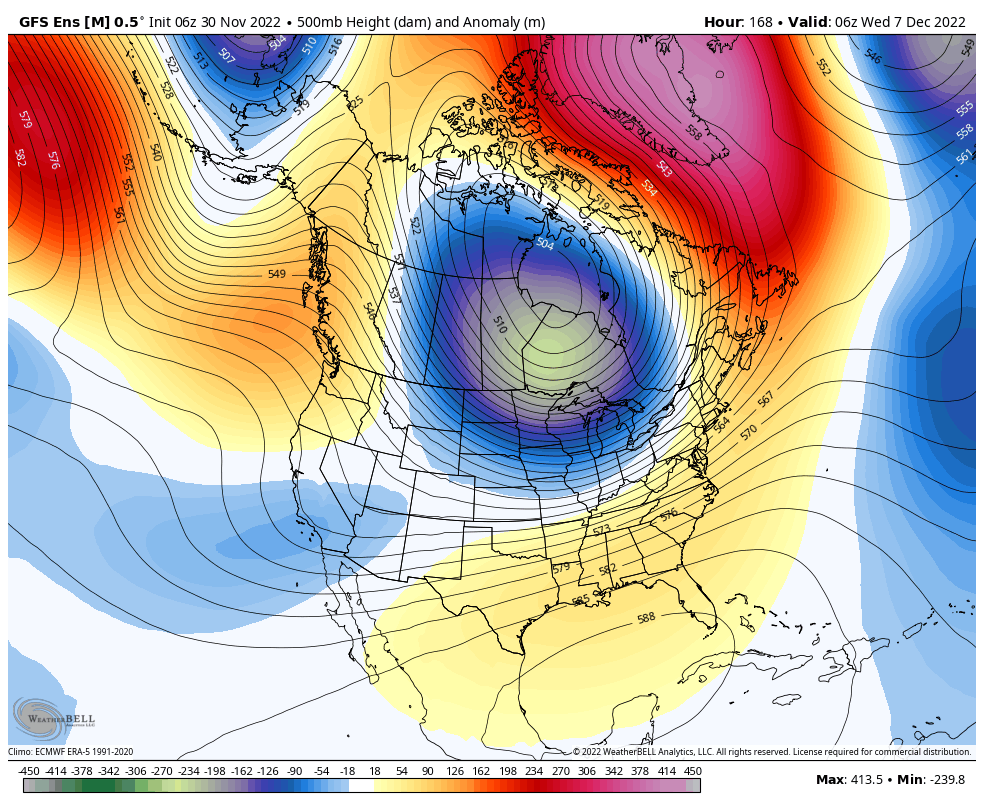 Day 10 and beyond there is not a lot of confidence in the forecast. The long-range models still suggest a more active pattern starting as early as Friday the 9th. But looking at the pattern through mid-month the strong high pressure (big red blob) over Greenland, a Greenland Block, looks to be well entrenched. 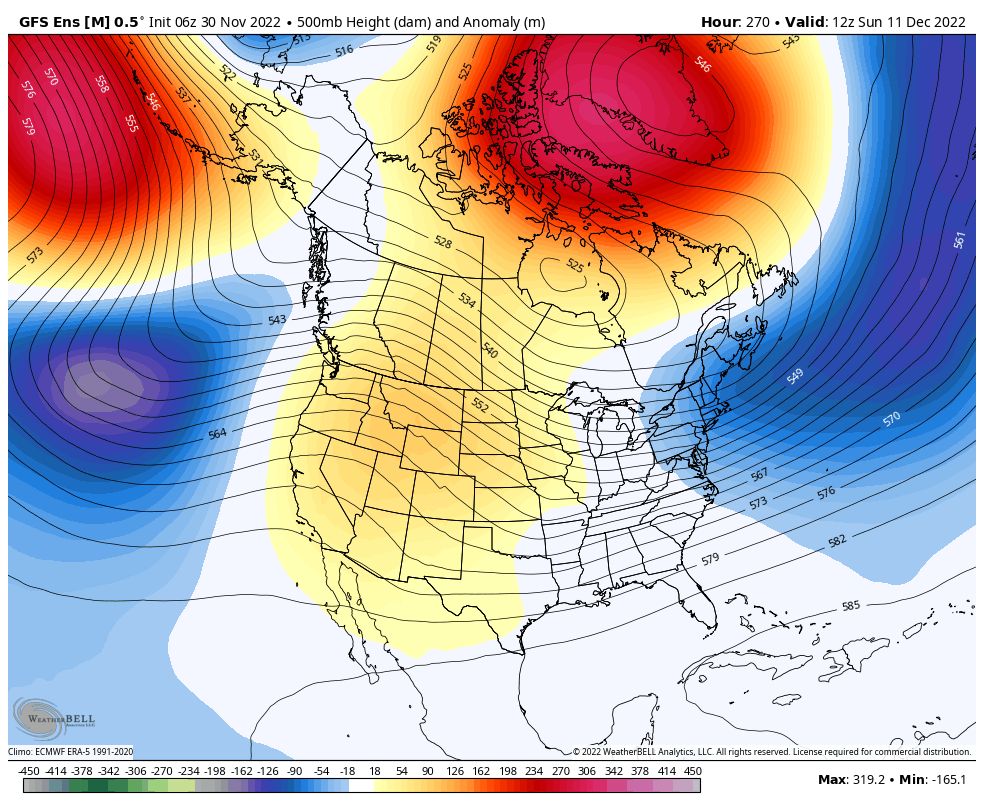 That usually sets up a -NAO pattern with a trough that gets stuck underneath over the East Coast and a ridge that gets stuck over the West. The long-range models are starting to show that as you can see above. The trough that was forecast on earlier runs for the West Coast is trending back westward off the coast.

Something we will be watching to see if a drier and milder pattern could be set up by mid-month into the 2nd half of December. But we could get another storm before that happens or it could not happen, we'll see...