- Sunny & warm through Friday with increasing winds Friday. Highs into the 70s at lake level and maybe low 80s in spots. Light winds increasing by Friday afternoon with ridge gusts to 50+ mph from the southwest. - A cold trough for the weekend with a chance for scattered showers Saturday & Sunday. Highs dropping into the 50s Saturdays at lake level, and maybe only 40s for Sunday. Even colder in the higher elevations. Snow levels start high and drop below lake level Saturday night. We could see a coating of snow on some mountains. Ridgetop winds gusting to 70+ mph Saturday and coming down through the day on Sunday. - The roller coaster weather continues with a drier and warmer pattern building in next week, possibly followed by another cool trough for the weekend of the 19th.

The spring weather roller coaster continues as we see warm weather during the week and colder weather for the weekends. Kind of the opposite of what most of us hope for. We have sunny and warm weather this week through Friday. Highs in the 70s at lake level to near 80, and 60s for the upper mountains.

Here is a an article on how the temperature decreases with elevation gain. https://opensnow.com/news/post/elevation-temperature-explained

The winds pick up Friday afternoon ahead of a cold trough for the weekend, with ridgetop gusts increasing to 50+ mph. A system that has been sitting off the coast of southern CA moves north at the same time as the trough moves in from the northwest over the weekend. 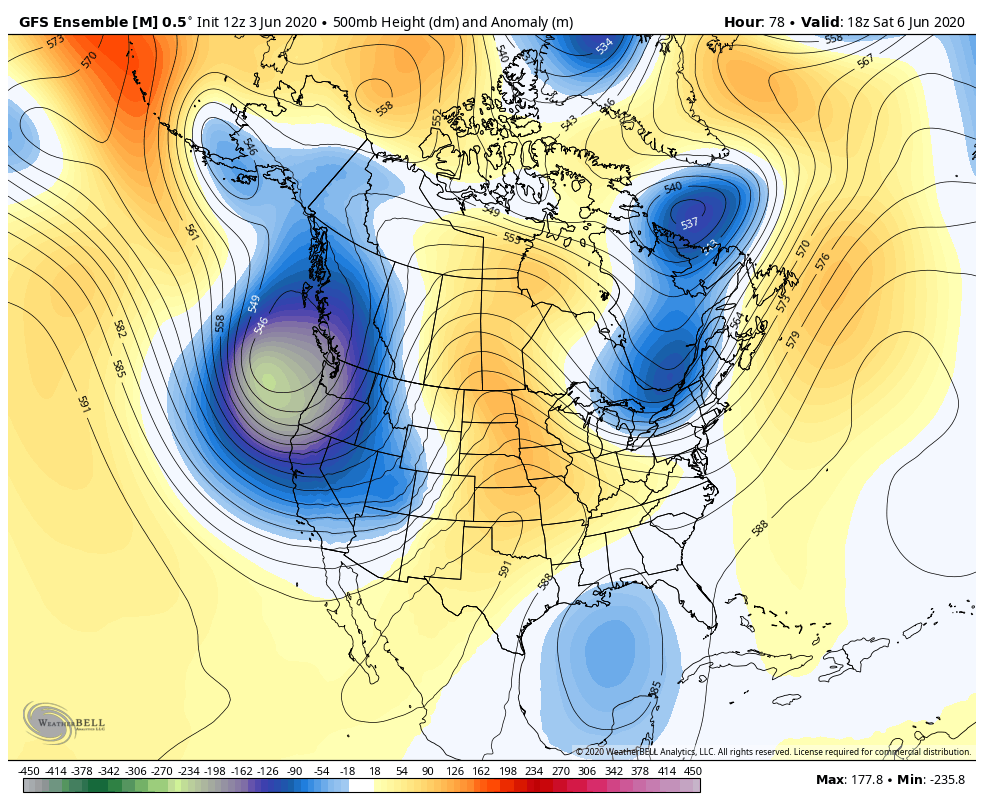 Saturday will be windy with ridgetop gusts to 70+ mph and gusty winds at lake level making for rough lake conditions. Highs drop into the 50s at lake level and colder in the higher elevations. So watch for cold temps and high winds if you are hiking this weekend. You can get the trail and peak forecasts at our summer site OpenSummit.com. Be sure to download the app as we have some really cool new features we are about to launch!

Highs only in the 50s at lake level for Saturday and maybe only the 40s for Sunday with colder temperatures on the mountains. Strong winds Saturday come down through the day on Sunday, but may still be gusty especially in the morning if you are out hiking. Well below-average temperatures for June over the West as the warmer air shifts east. 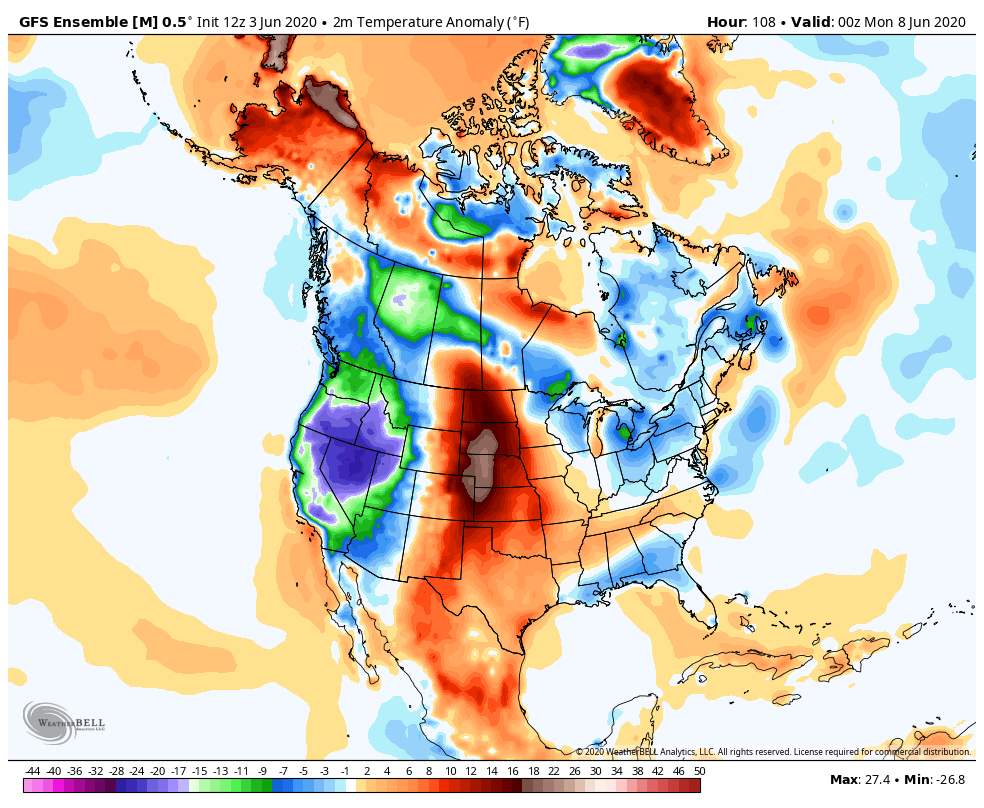 High pressure builds back in through next week with dry weather and warming temperatures. Back into the 50s Monday and 60's by midweek. 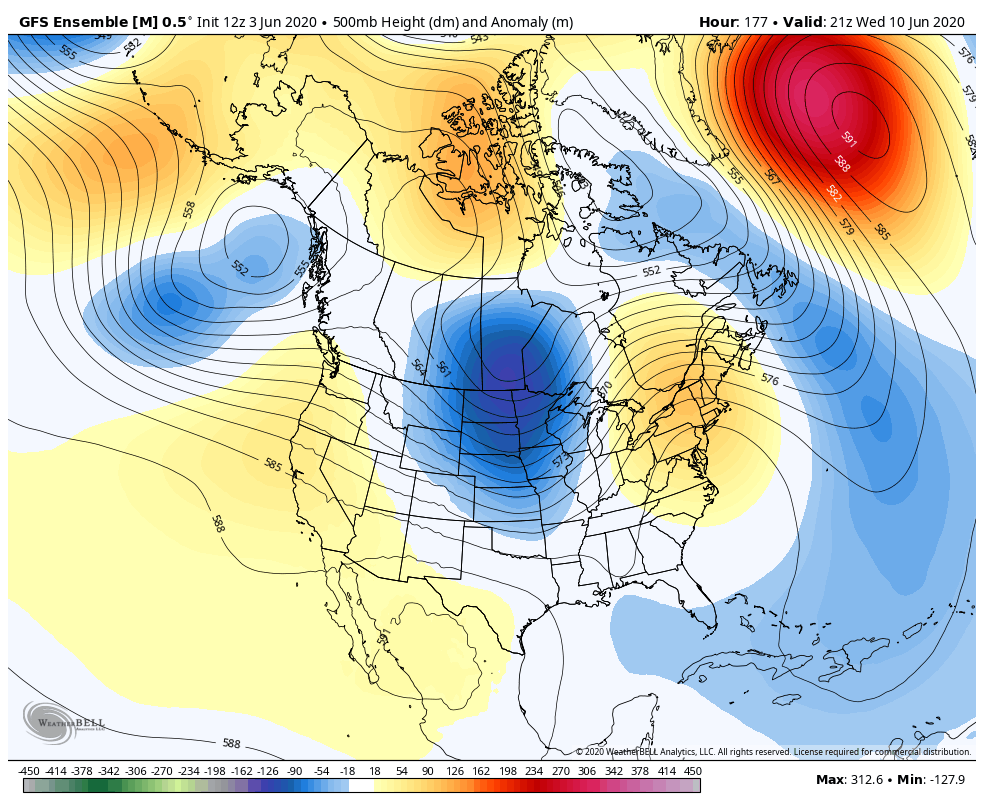 The roller coaster may continue with another cool trough possibly pushing in for the weekend of the 19th. 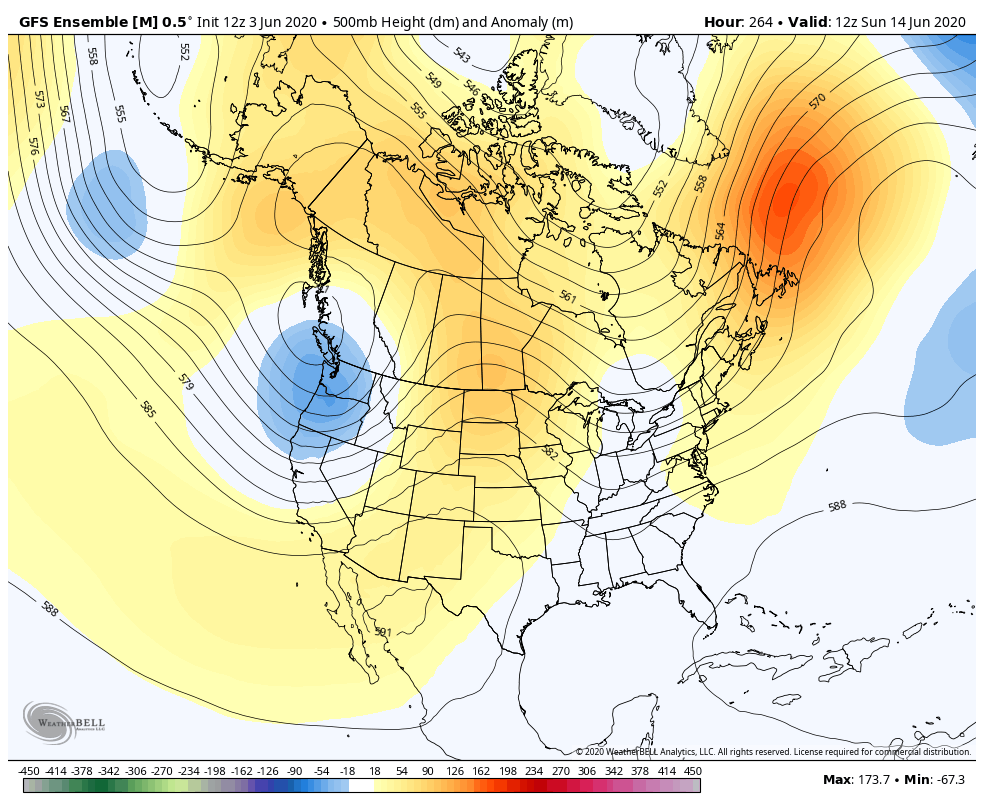 The total precipitation amounts for the next 7 days show most of the moisture staying to our north in the Pacific NW. Some light precipitation farther south over the Sierra from the possible showers this upcoming weekend. 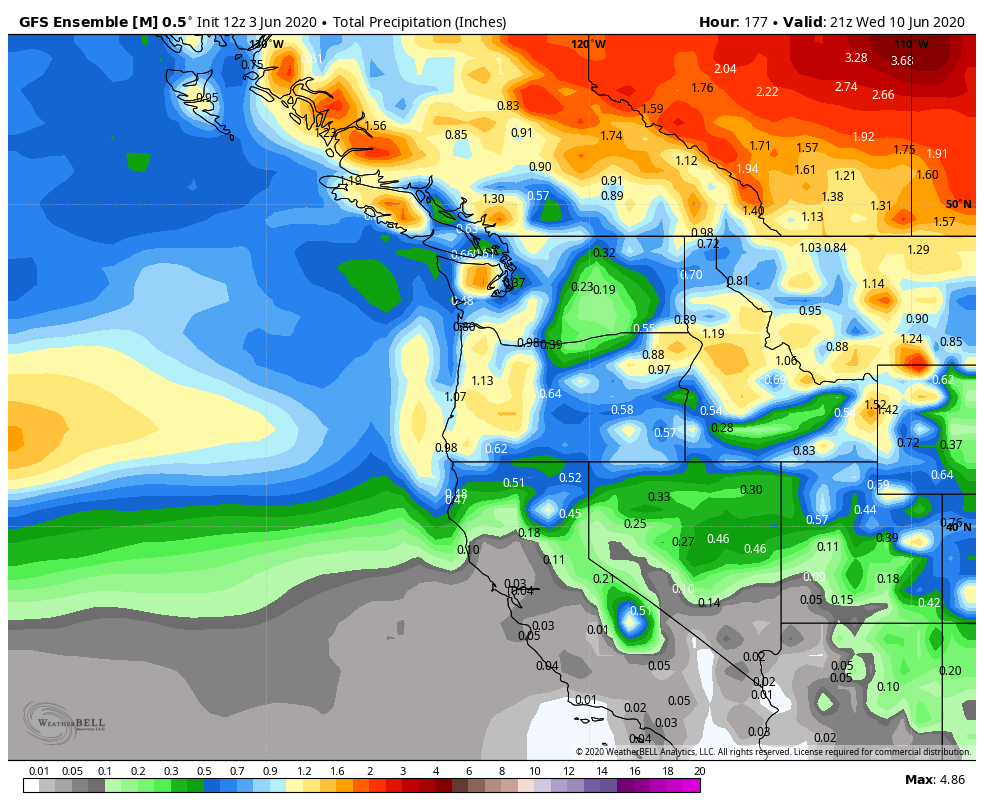 The long-range models and the CPC's forecast show that systems could continue to come through the Pacific NW, keeping the pattern up there fairly active for June. We may stay on the drier side farther south in CA. But we may see a cool down with each through moving through the Pacific NW.

I was able to get the official stats from the Central Sierra Snow Lab for April and May as they have hired a new scientist. But we did lose the official snowfall measurements for December through March, unfortunately.

April continued the stormy pattern from March and we saw above-average snowfall with 40 inches of snow vs the 35-inch average. 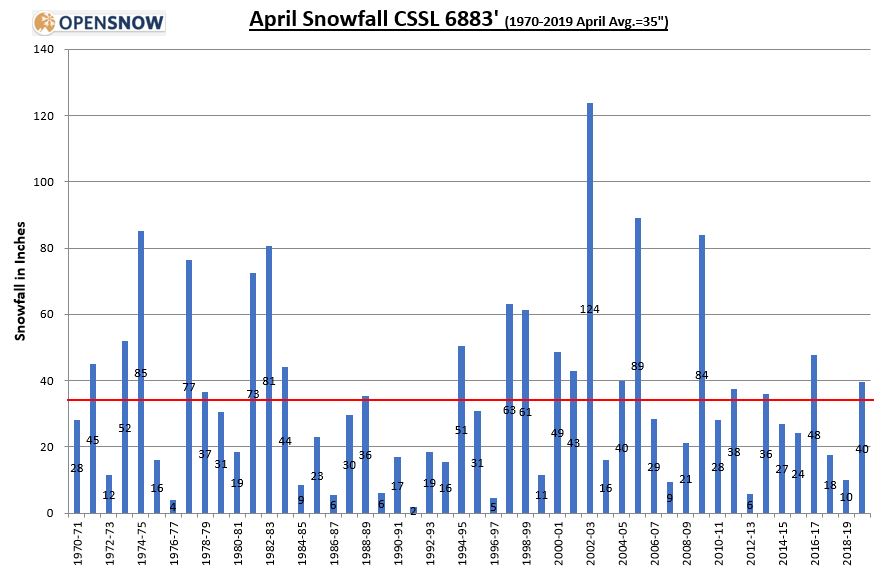 Then in May, we only ended up with 6 inches of snow at the Snow Lab vs the average of 10 inches. 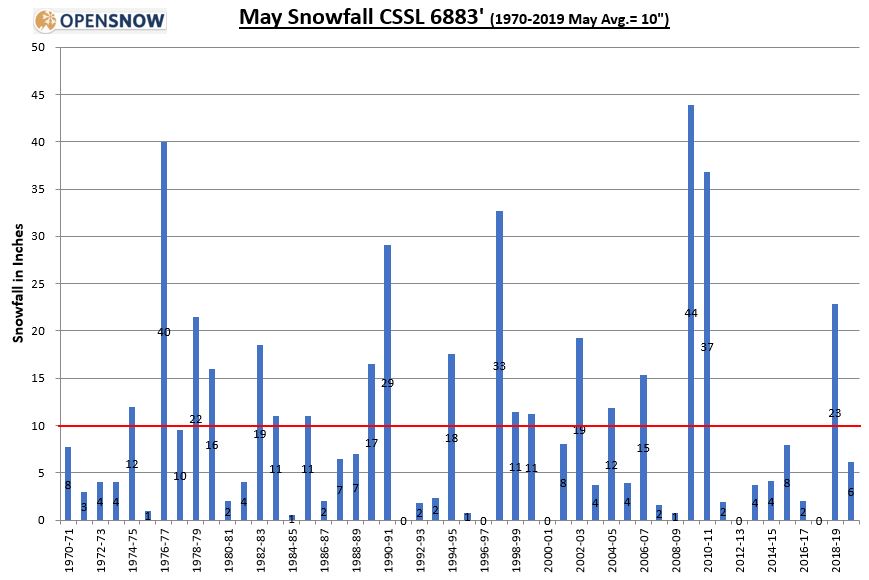 May wasn't a dry month but we had higher snow levels. We saw some decent snowfalls above 8k but the Snow Lab records just below 7k. Total precipitation for the month came in at 4.3 inches vs the average for May of 3.1 inches. 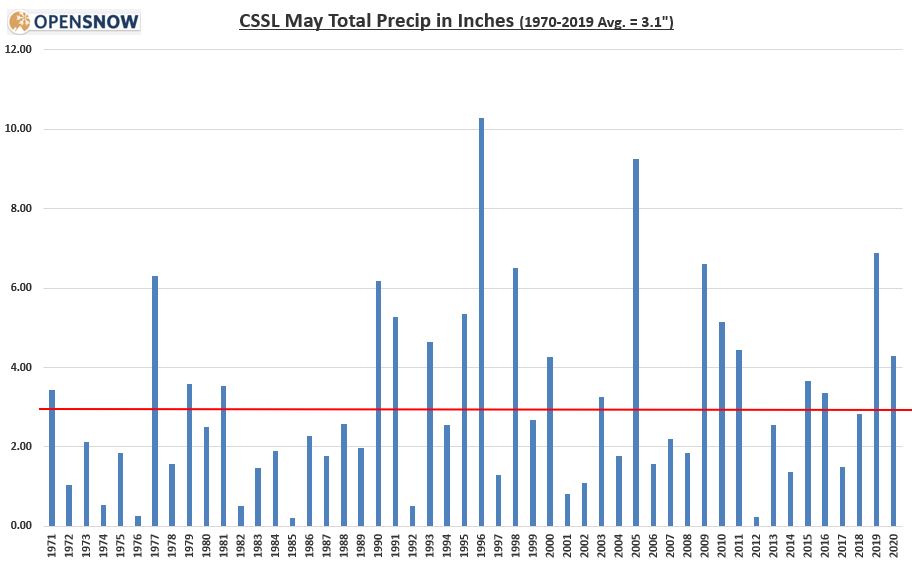 That brings the total season snowfall to around 284 inches or 74% of average (384 inches). The median is 376 inches since 1970. Not too shabby after being one of the lowest snowfall seasons on record going into March.

We rebounded nicely out of the bottom 10 in March & April as we all sat home watching it snow out the window and on the cams with a tear in our eyes... 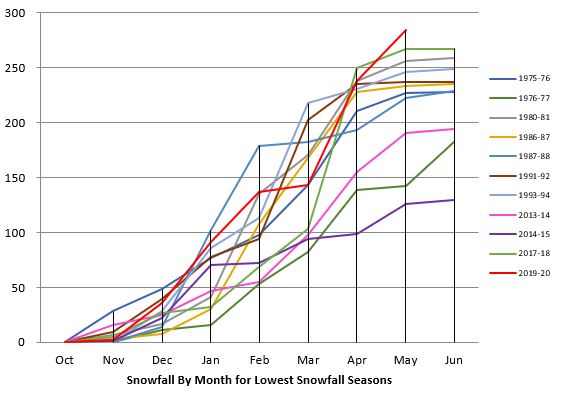 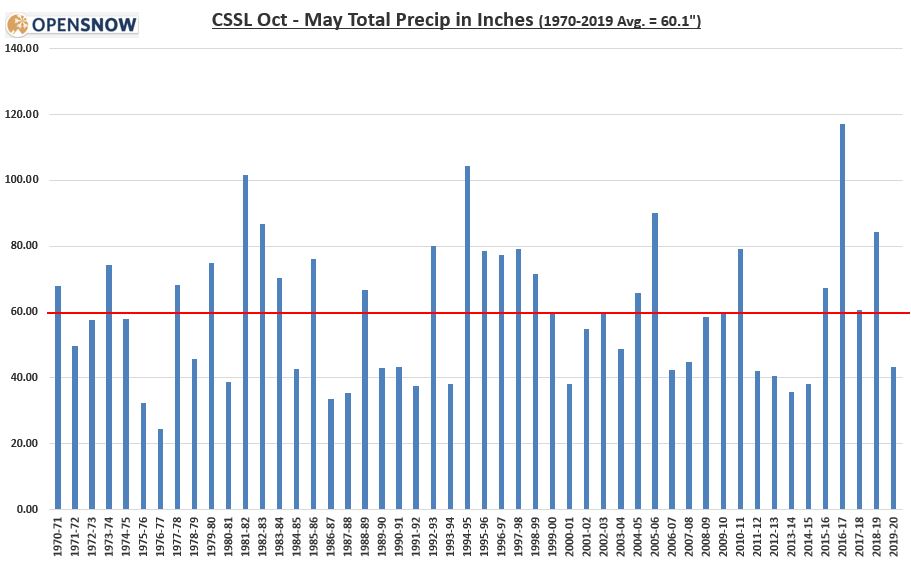 When we had storms this season they were mostly cold storms with higher than average snow ratios which is why the snowfall was 2% higher as a % of average. The lower water content is also why the snowpack topped out at 58% of average on April 1st. 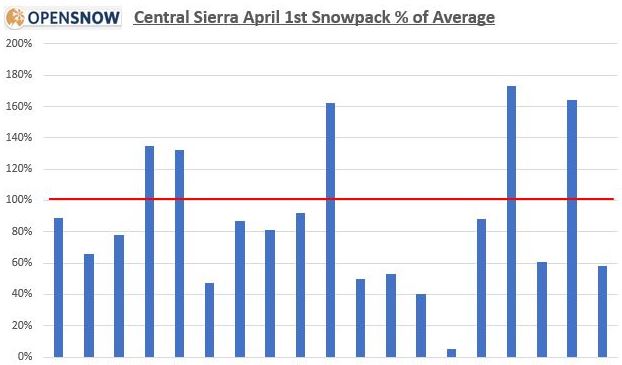 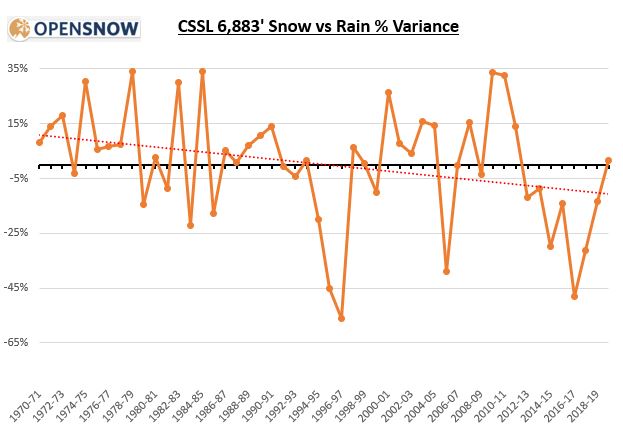 This is one of the ways I'm trying to track possible increases in the average snow levels of storms combined with decreases in the snow ratios that would be assumed with increased warming. There has been a downward trend but the cold storms this season popped us back into the positive side. I think the Snow Lab is a good case study being at 6,883' and lake level being closer to 6,200'.

More forecasts and entertainment weekly as we go through the summer.