Cooler with Showers for Northern Utah by Sunday

Our hot, dry weather will finally see a bit of an interruption as a system brushes Utah this weekend. Northern Utah should see some showers with light snow possible in the high elevations. Temps will be much cooler, but will bounce back above normal next week as high pressure takes control once again.

On Wednesday we discussed two different solutions -- one from the GFS model that showed a relatively weak system, and one from the ECMWF (Euro) model that had a deeper solution with colder air and more widespread rain and snow statewide. Well, we've seen trends toward the GFS and beyond in the last 48 hours. That means that a big October snowstorm is off the table. Instead, we'll be brushed with the main energy passing to our north.

This is the latest from the GFS model: This is actually a bit of an improvement from some of the earlier runs. Still, this shows generally light valley rain and high mountain snowfall from roughly Utah County northward to the Idaho border. Notice the best snow will be up in the Tetons.

The Euro, meanwhile, is even more meager than the GFS right now. This is the output for snow specifically: 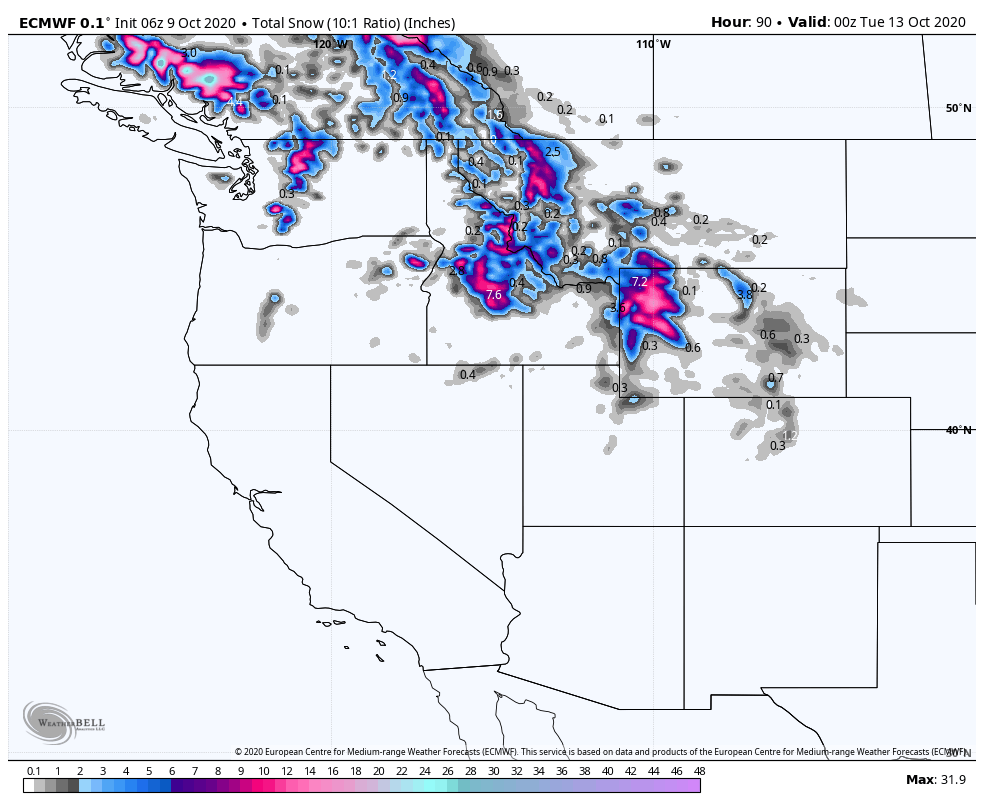 Only light amounts above 7000ft and generally north of the SLC/PC area. Again, the tetons will get the brunt of snowfall.

The other main story will be cooler temps. While we will see around a 20F temp drop in max temps, this is actually not quite as big of a cool off as we were originally expecting in the deeper scenario. However, yesterday matched the record high temp in SLC for the date, so we are WAY above average right now. Even a modest cooloff down to just below normal is going to seem dramatic.

While I'm disappointed that the storm is looking less impressive than it was a few days ago, this may be a blessing in disguise. It's looking likely that we will see an extended period of high pressure once again late next week and toward the end of October. If we had seen more significant snow, we could easily have seen snow rotting on northerly aspects creating instability issues down the road. Right now, any snow we do get should quickly melt off and we won't face any issues.

Looking at long range models, pattern favors warm and dry into the last week of October. Then, we could see a pattern shift as we approach or enter November. Of course, this is speculative at this point. We'll watch and see how that develops.