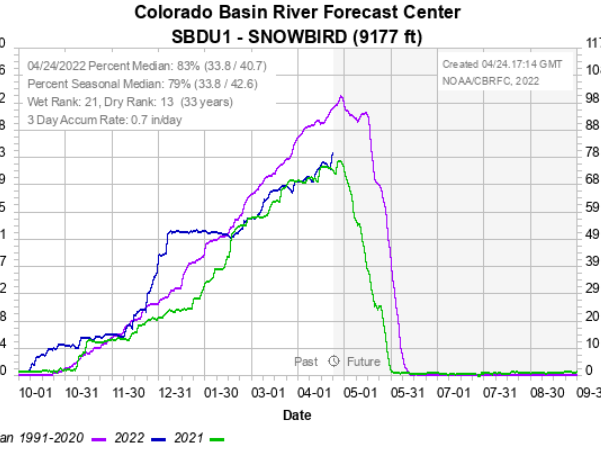 Our storm is mostly wrapped up aside for a chance for a few convective popcorn showers on Sunday afternoon. A mostly sunny and warm week ahead with next chance for snow arriving for Friday.

What a storm for the Central Wasatch! Not only the water content and snow amounts, but the ski conditions as well. Probably the best April powder day in the Cottonwoods since the Tax Day storm of 2015. Many also believe yesterday could have been the best powder day of the season in LCC.

As for amounts, 31" reported at Alta at 2.50" of liquid at Alta-Collins. That's pretty darn close to the 10:1 SLRs that we talked about before the storm, but the liquid amounts bettered the upper limits (2") of the forecast range. That means we got more snow than anticipated! Snowbird reporting 29" and Brighton and Solitude a bit behind due to less favorable orographics at 19" and 18" respectively. A very good storm for any time of year, but especially late in the season when we are a bit less likely to see big snowfall events.

You may wonder what that did for our snowpack. Overall, not that much statewide as very few areas saw anywhere close to as much snow as the Cottonwood Canyons. In the canyons, however, the impact was more noticeable. You can see here that the storm guaranteed that we finish this year above last year's peak at Snowbird: 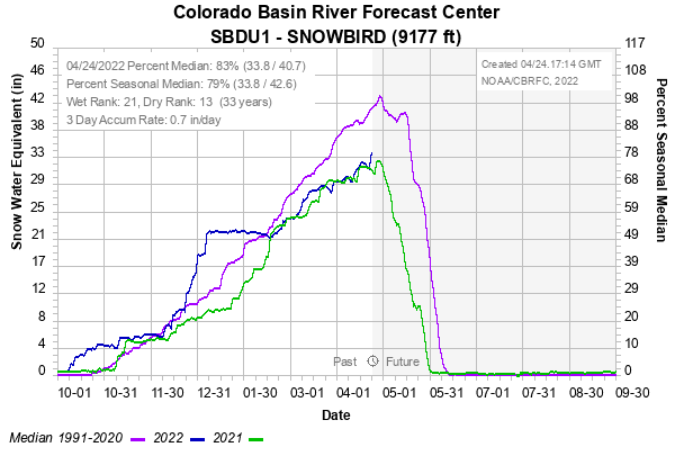 Unfortunately, we are still at 83% of median and 79% of the median peak. Unless we get big snow later this week, I think this is likely our peak.

Today (Sunday) we will see afternoon popcorn snow showers that could put down another quick inch or two. We could also have lightning in some of the heavier showers that could hamper end-of-season festivities a bit. We clear out for most of this week with generally warming temps. Our next good shot for accumulation snowfall looks to be Thursday night or Friday in Northern Utah mountains. Not a big storm, but a few inches of cream to end the month of April is possible.

I am going to be writing and publishing an end-of-season wrap-up post this week where we look at all the stats and talk about the season overall. Stay tuned for that...