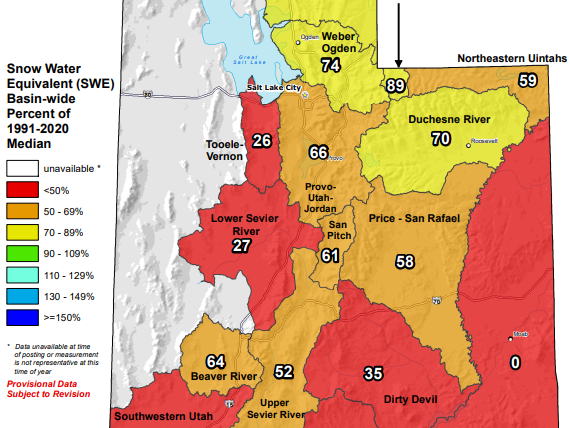 Thank you for a great season! Let's wrap up this year by taking a look at the statistics and numbers, as well as ranking this season compared to others.

I'm not quite sure where to start with summing up this season. It was different than any other season I've experienced in my years in Utah, both personally and meteorologically. It was, in short, a season of extremes. We had some very good periods with plentiful snowfall. We also had a couple of very long periods of little to no snow and less-than-ideal conditions.

If you remember back to October, which is typically the month in which most high elevations start to build a permanent snowpack, we saw a very active pattern. In fact, it was the snowiest October in the Wasatch since 2004. Alta recorded 67" of snow for the month, which is similar to a normal November or April. By the start of November, our snowpack was looking quite healthy: 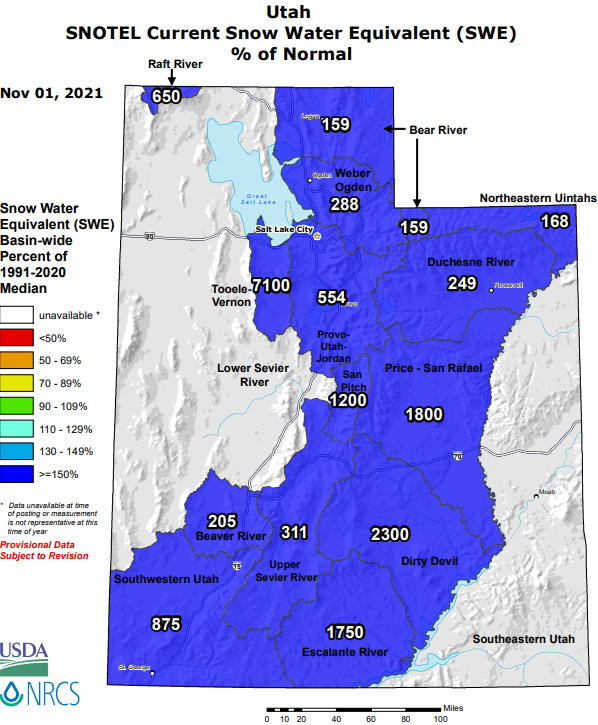 Many locations that don't typically have any snow at all had solid amounts on the ground -- hence some of the astronomically high numbers above. The point being, it was quite an auspicious start to the season.

If October got our hopes up for a snowy winter, November was a grim reality check. Very little snow fell during the entire month. Our way-above-average numbers to start the month had fallen below normal by the end of the month. Some resorts had to push back opening day or open only limited terrain -- which seemed unthinkable at the beginning of the month.

The month started dry -- a continuation of November's high pressure ridge. By December 12th, our snowpack numbers were starting to look quite dismal: 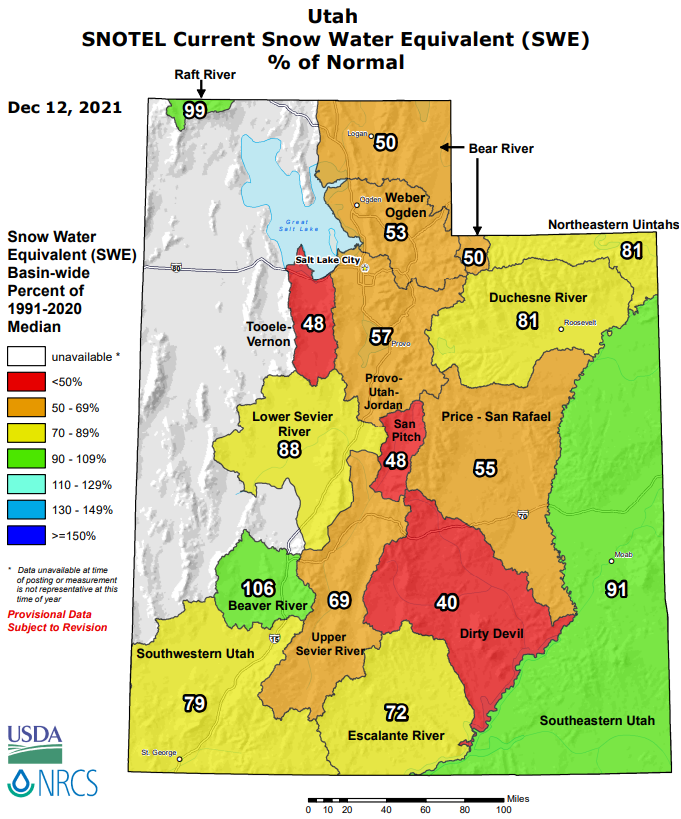 However, the switch turned on thereafter. I made a prediction in early December that the statewide snowpack would be above normal by the end of December. It was a bold statement, but the forecast patterns were starting to look quite favorable. Sure enough, we received up to 150" of snow in the last few weeks of December and by the new year, things were looking much better: 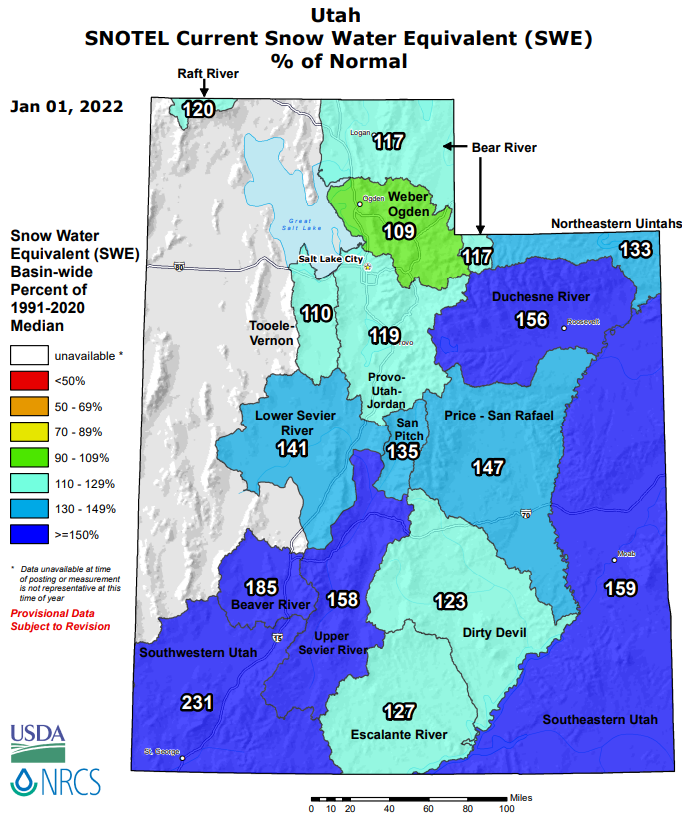 All basins throughout the state were above normal, with many of them quite a ways above normal. At this point, it seemed an above-normal season was a real possibility. But...

January-February (AKA "The Flatline"):

After the first week of January, the storms stopped. We saw only a few very weak impulses throughout most of January and all of February. Snowpack numbers fell as our snow water equivalent flatlined across the state. This flatline can be seen clearly in the Alta seasonal snowfall graph.

And our above-average snowpack, fell well-below average during this same period in January and February: 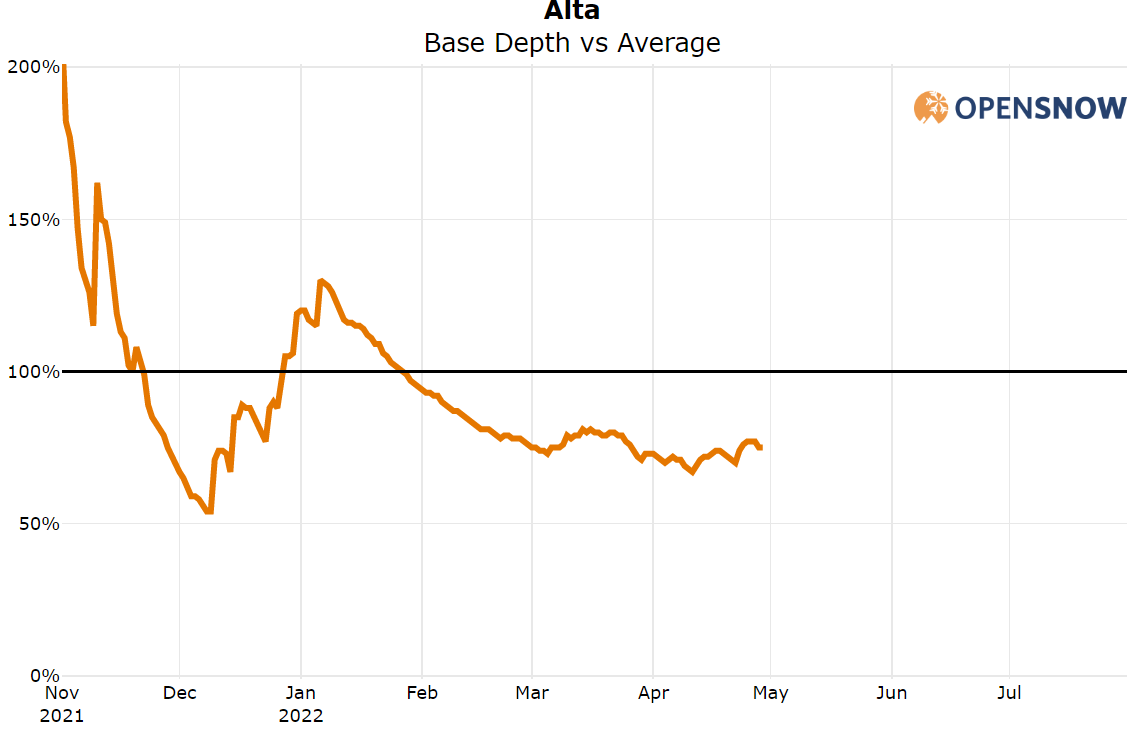 The storm tempo finally started to pick up again in March with snow totals closer to our historical averages, at least in the northern half of the state. However, a historic heatwave in late March accelerated the spring melt-off, especially at low and mid-elevation locations. April saw consistent storms and snowfall that was near average for the high elevations, but again, warm periods between storms made it difficult for us to make up any serious ground with regard to snowpack compared to average. Now we close out April, and our snowpack has been depleted further due to a sooner-than-normal spring melt: 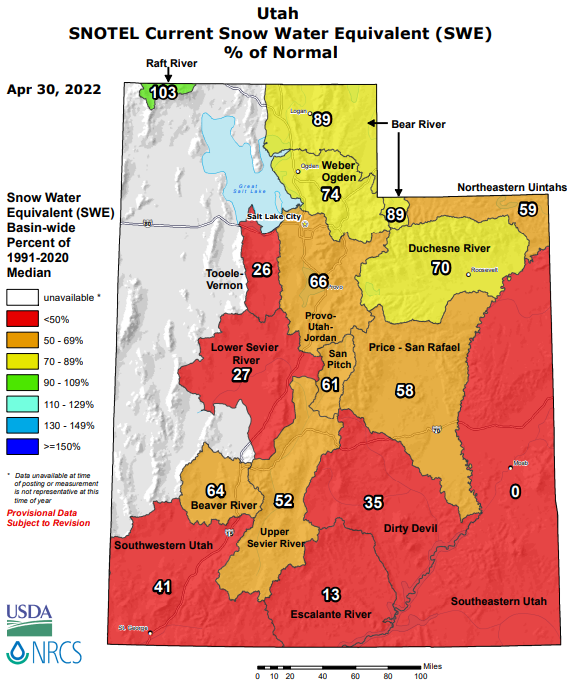 You can see this decline even more clearly in the statewide average of all snotel sites: 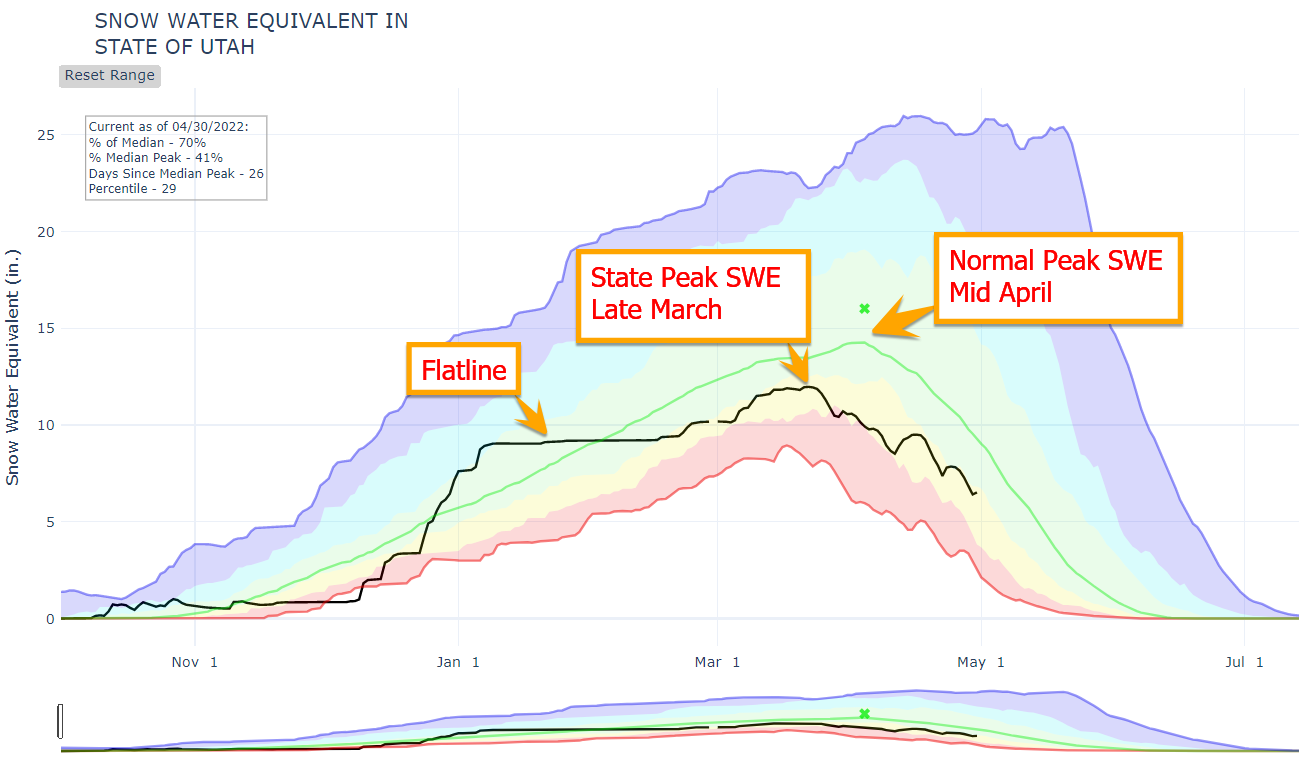 You can see that we peaked in late March which is about 3 week sooner than the median peak snowpack. Essentially, despite active weather, the spring melt came early this season -- particularly at mid-elevations.

Perhaps the snowiest site in Utah is the Snowbird snotel site. This site typically sees more snow that peaks later than most other areas due to its high elevation, favorable orographic terrain, and protected north-facing location. Here is how it looked this season: 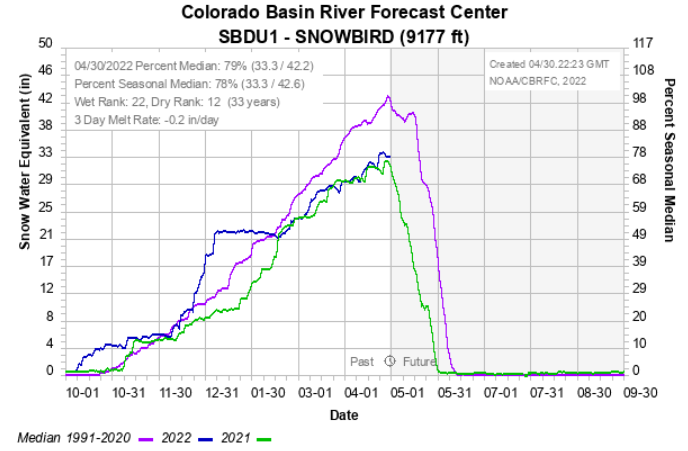 This year (blue line) we had a great start in October, then fell back close to median by early December, then we shot way ahead of median as we entered January. Then, the flatline brought us back to median and even a bit below in late February. We've spent March and April trying to keep pace with median while fighting some melt-off periods between storms. Overall, we will finish just barely above last year and about 80% of the median peak snowpack. 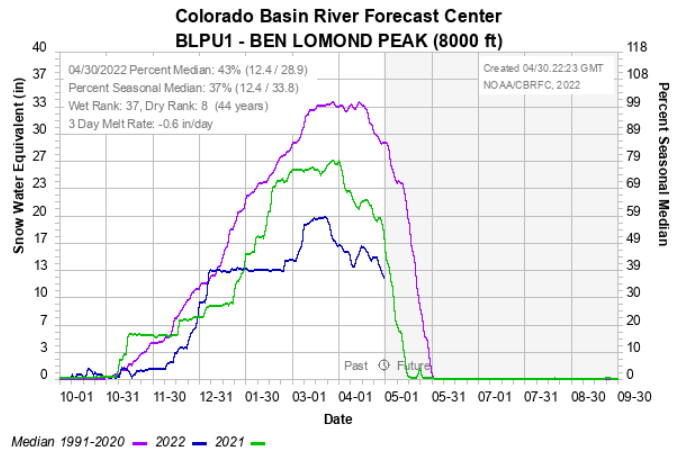 Ben Lomond Peak is another very snowy location in the Wasatch. Nearish to Snowbasin and Powder Mountain, it's a good gauge for how that part of the Wasatch is faring. Unfortunately, it was an absolutely brutal year in those parts. Unlike the Cottonwoods, October did little to jumpstart the snowpack. December was good, but only brought the snowpack up to level with median. When our dry January and February hit, it was falling farther and farther behind until BLP was only around 50% of median to start March. The area did get some good March and April storms which helped make up a little bit of ground, but overall, it was an awful season up there. We will finish with a peak snowpack that is only about 60% of median.

TGL is one of the most consistent snowfall areas of the state. It seems like in bad years, they often tend to do okay. This year, let's look: 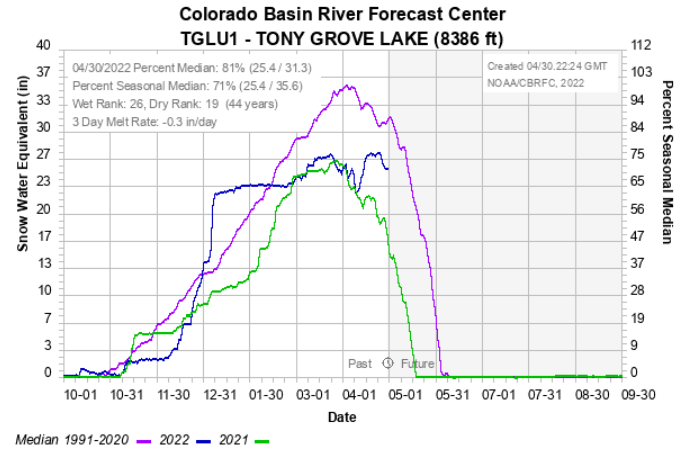 Similar to BLP, TGL didn't have much of a snowpack until mid-December. Then, it shot up to way above normal. Much of this was thanks to an exceptionally wet system at the beginning of January. However, the flatline was brutal and we only managed to gain another 4" of SWE over the next 2.5 months. A decent April brought the snowpack back up again, but like Snowbird, the peak SWE was about 80% of normal.

Not far geographically from Snowbird, sometimes the conditions at PC can be quite different. 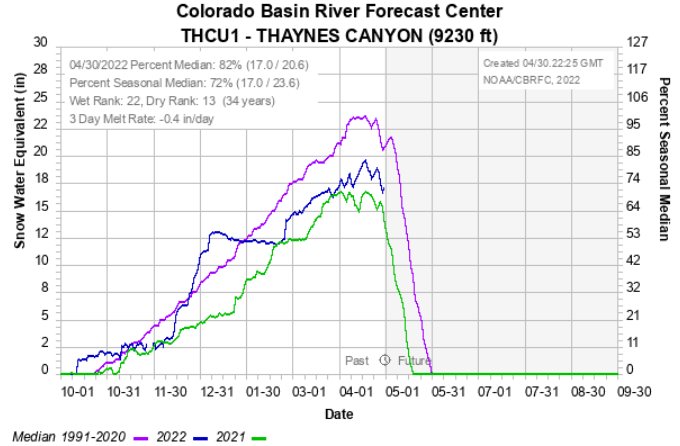 A similar story in which we started well, then fell behind, then shot way above normal, only to be doomed once again by the flatline of death. A valiant March and April effort to recover fell short and peak snowpack was about 80% of normal.

Is there a success story at or near any Utah resorts? Perhaps Eagle Point is the closest to a good season statistically. Here is the date for a local snotel site: 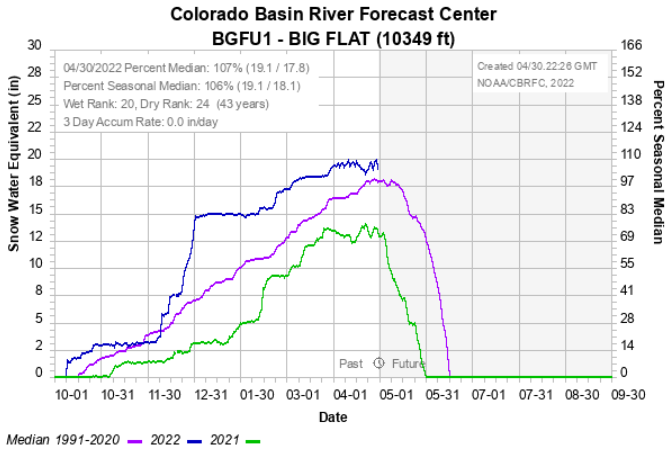 An absolutely massive December for the area put it so far above average, that even the flatline of death couldn't drop it below median. Not a lot of snow in February, March or April, but enough to ensure that it will finish above median. And that's the one success story I have for a snotel site that's near a resort...

We have now gone over all the numbers. If you spent the time to actually read all of that, I'm impressed. The other thing to consider is how the season actually skied. For me, it was rough. This was by far the fewest powder days I've had in a season in my time in Utah. Part of that is personal circumstance. I am a full-time dad and often have to miss powder days to take care of my kid. The other part is the intricacies of the season itself. Such a large percentage of the snow fell during a relatively short period from mid-December thru the first week of January. After that, true powder days were few and far between.

Another factor is when the snow fell. Last season, you may remember that it seemed like all the storms pushed in on Fridays. A huge proportion of our snow was recorded on Saturday. This year, using Alta's data, Wednesday and Friday were the big winners in terms of most snow reported. In fact, more than 50% of our snow fell from Tuesday morning thru Friday morning. This was a good season for mid-week skiers -- which helped to mitigate some of the traffic issues we saw last season with everybody trying to score first tracks every Saturday morning. However, if you are a weekend skier, it meant fewer powder days than last year.

I would rank this season close to the worst I've had as a skier in Utah. For me, it was just a combination of inconsistent snowfall, and challenges finding the time to ski the good stuff when it came. I also had a couple minor injuries to deal with that made it a bit less enjoyable. I'm not complaining. I still had many good days and lots of smiles, but relative to some other seasons, I did not find this one to be as good. Just my two cents...

Not much we can saw about next year at this point. The last two seasons were La Nina winters and both were below average here in Utah. There are some signs that next year could be the third La Nina in a row. I'm hoping for a change at this point, so I hope that is not the case. No point worrying about it just yet. The short answer is that we have no idea what next season will look like. It's likely we'll have no idea what it will look like in October. Seasonal forecasting is next to impossible.

Thank you all so much for reading, both today and all season long! When the forecast isn't going out way, it's comforting to know that many of you are as desperate as I am. Let's pray that next year brings more consistent good snowfall our way!