Final Forecast for the Summer 2021 Season 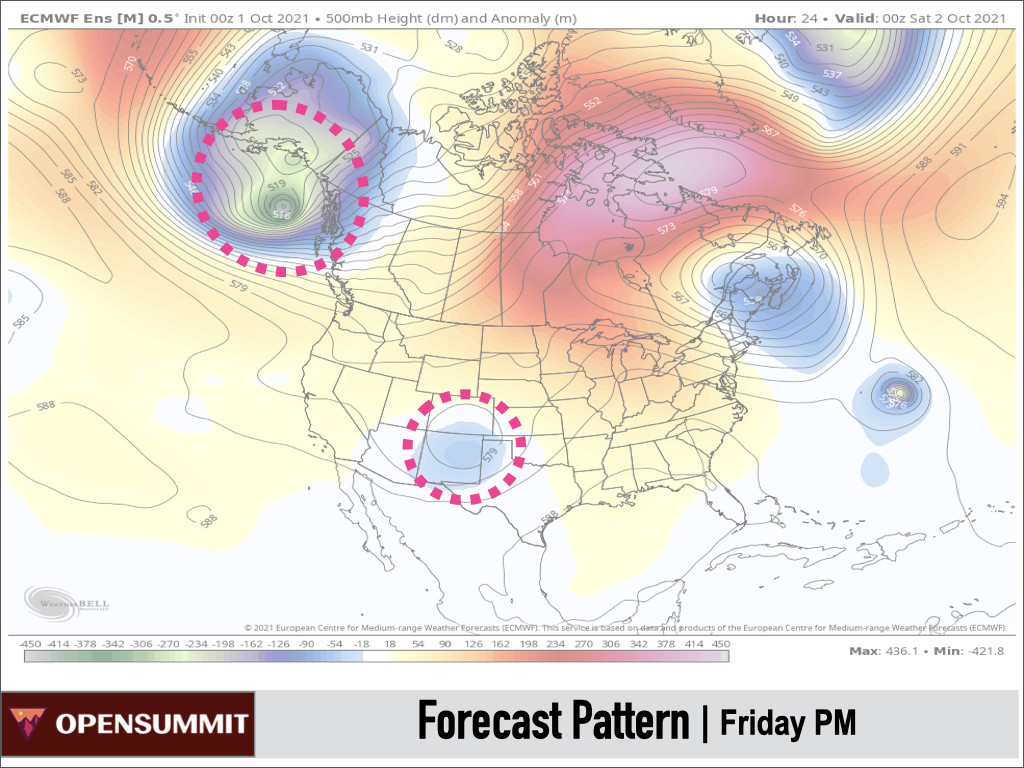 Unsettled weather will linger through the weekend across the Four Corners region as well as the Olympic Peninsula and Northern Cascades, but all of these areas will see a drying trend relative to recent days. A more active pattern is likely to develop across the entire West late next week and into the Oct 8th-9th weekend. This will be the final Daily Summit post of 2021 as we gear up for winter.

Snow has fallen across the higher elevations of Colorado, New Mexico, Eastern Utah, and the Pacific Northwest in recent days with wetting rains across the lower elevations and valleys. Just a sign that the seasons are changing...

Heading into the weekend, the pattern will gradually start to relax across the Western U.S. but unsettled weather will linger for some areas.

A slow-moving storm is lingering around the Four Corners region, which will result in additional shower activity through the weekend with a gradual decrease from Friday through Sunday.

Meanwhile, a large trough of low pressure is in place in the Gulf of Alaska, and a couple of storms associated with this feature will impact Coastal British Columbia through the weekend with glancing blows for the Olympic Peninsula and Northern WA Cascades. 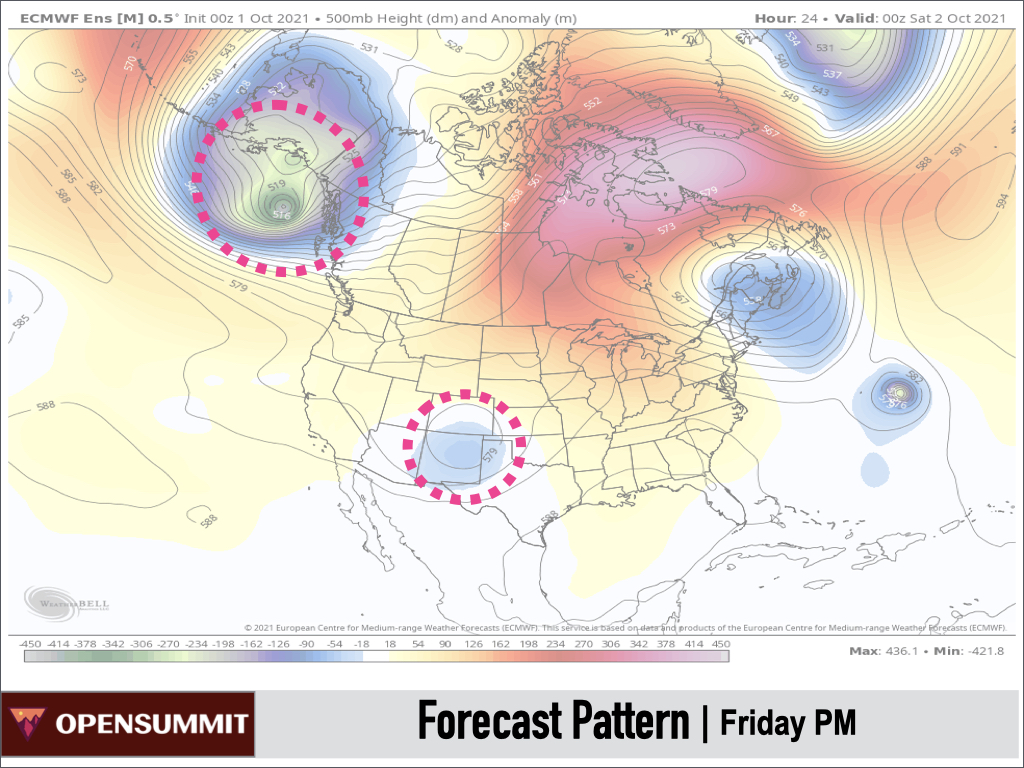 Taking a look at our Forecast Radar, we can see extensive rain/snow showers and thunderstorms developing across Colorado and New Mexico on Friday afternoon. 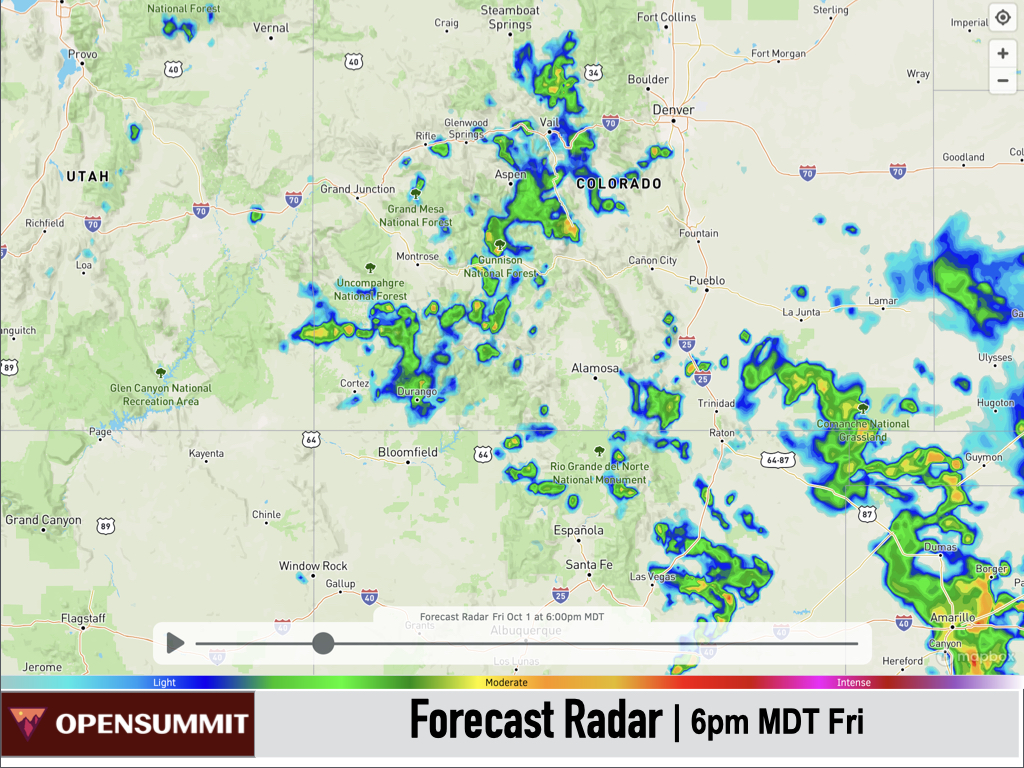 The trend through the weekend will be lighter and less widespread showers. However, higher elevation areas in Colorado and the Four Corners region will pick up additional snow accumulations through the weekend. Heavier snow will fall north of the US/Canada border across the central and northern ranges of British Columbia 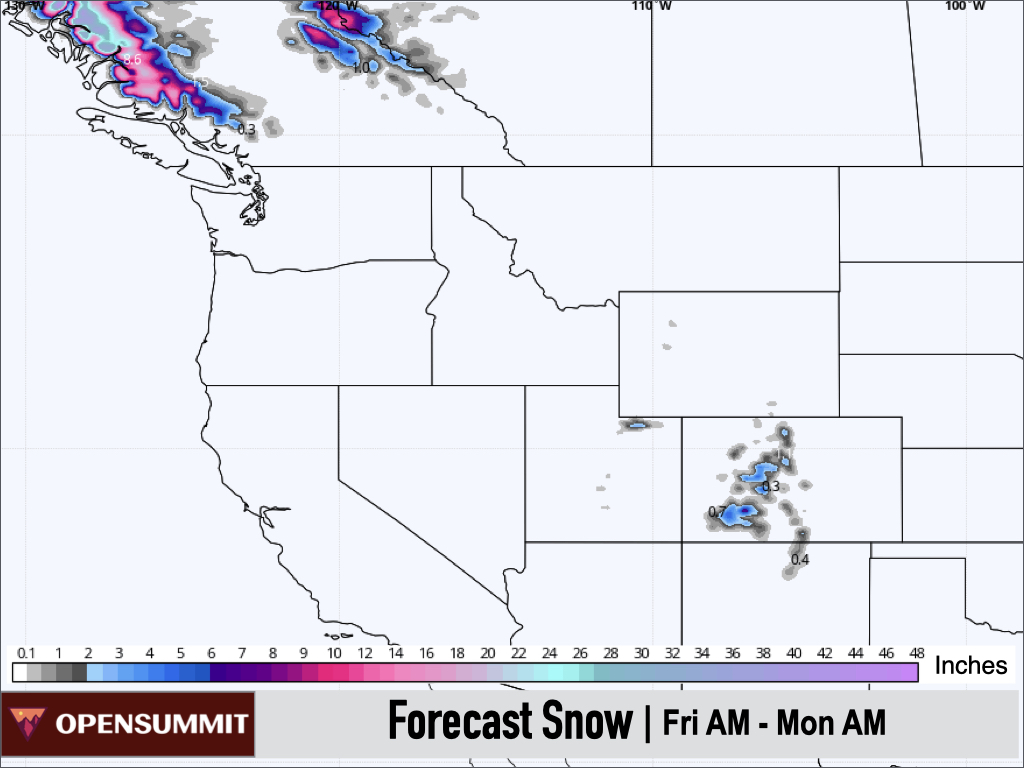 Heading into next week, a weak storm will develop over the Southwest and will bring another round of showers to the Four Corners region on Tuesday/Wednesday.

However, the big story will be a large trough of low pressure that will reach the West Coast on Tuesday and will eventually impact a large portion of the Western U.S. during the second half of next week, bringing cooler temperatures, high elevation snow, and low elevation rain. 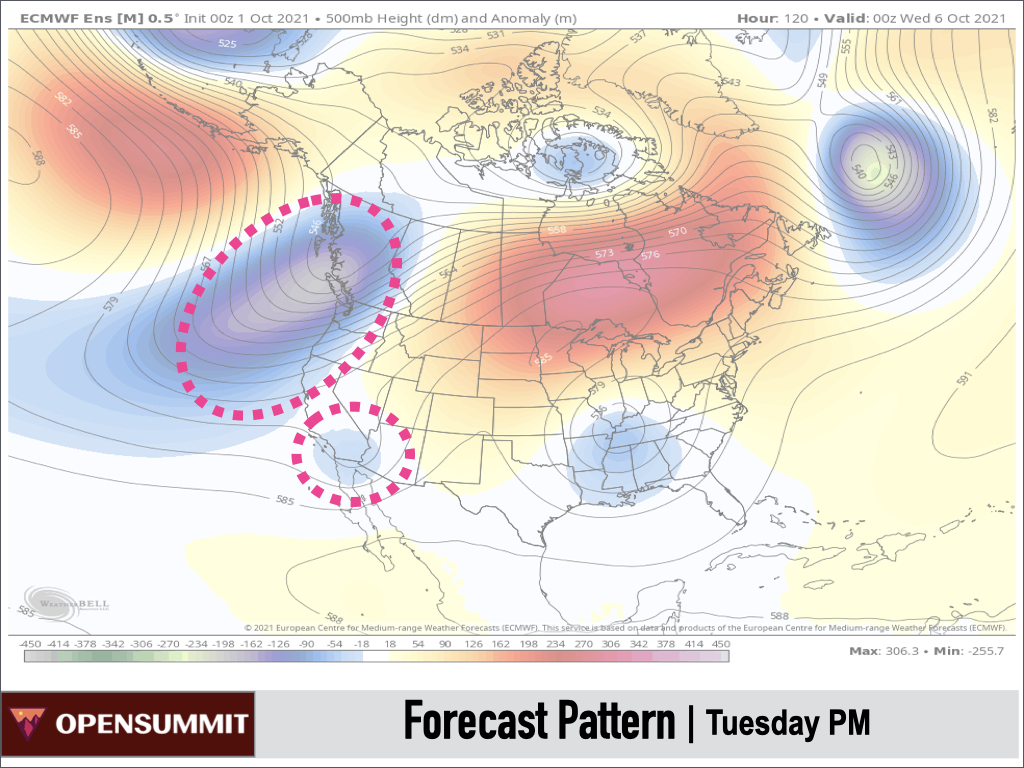 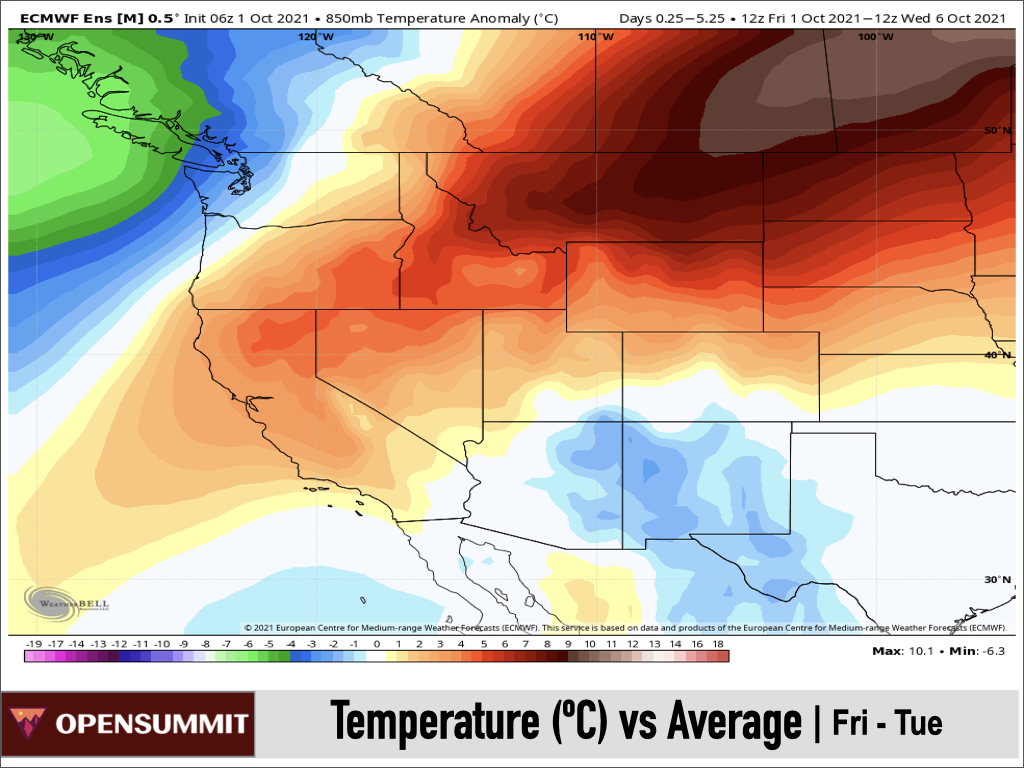 Shower activity (high elevation snow/low elevation rain) will favor Colorado and New Mexico with Eastern Utah ranges such as the La Sal's getting in on the action as well. A weak disturbance will bring a few light showers to the Northern Rockies, but won't amount to much. The Pacific NW will see a nice break after a wet week. 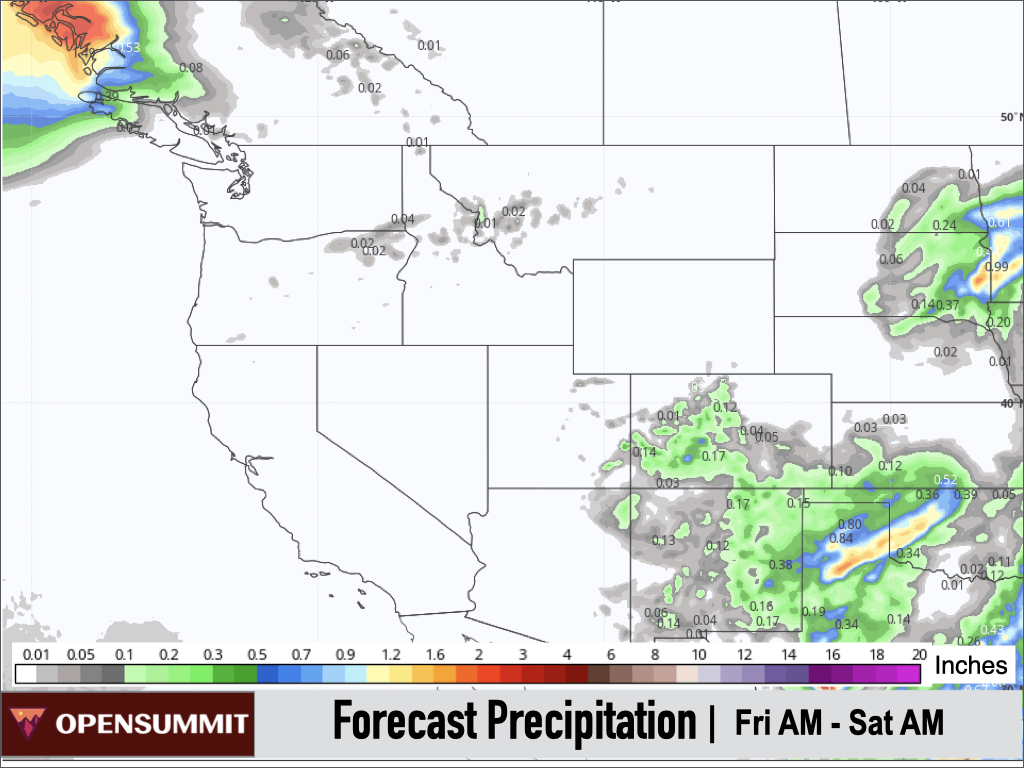 Additional showers can be expected across Colorado, Northern New Mexico, and Eastern Utah but coverage will be less compared to recent days. A storm will impact British Columbia with lighter showers extending as far south as the Olympic Peninsula and Northern Cascades in Washington. 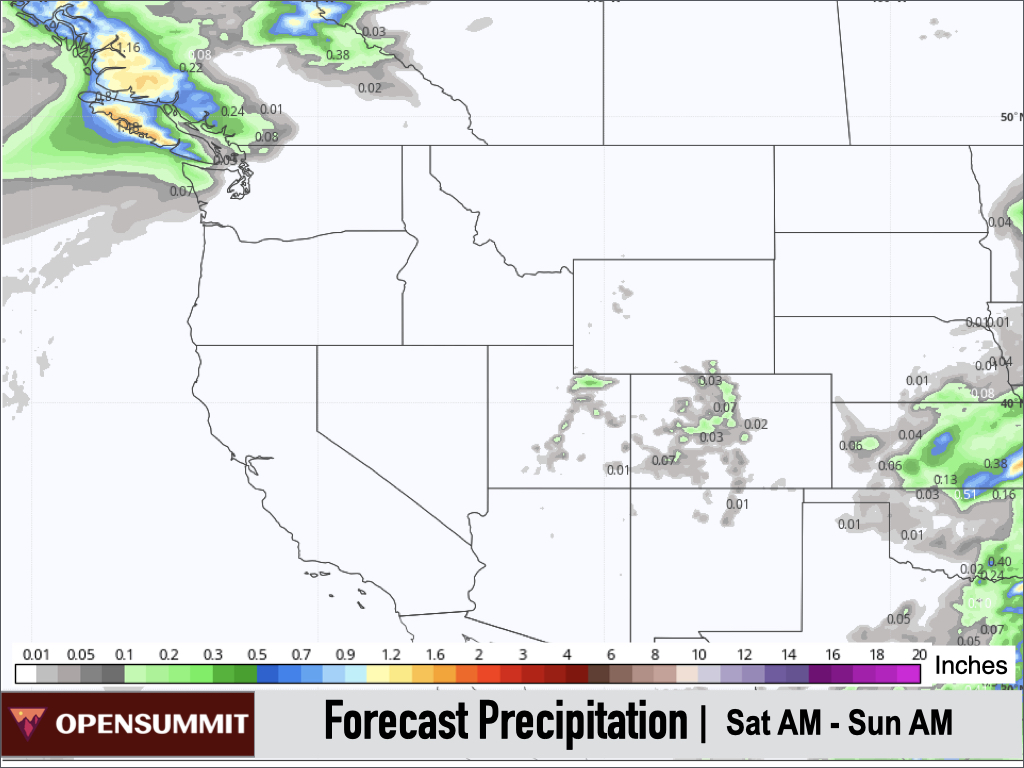 Shower activity will become lighter and more isolated on Sunday over the Four Corners region. A few lingering light showers are possible across the Olympic Peninsula and Northern Cascades as well. 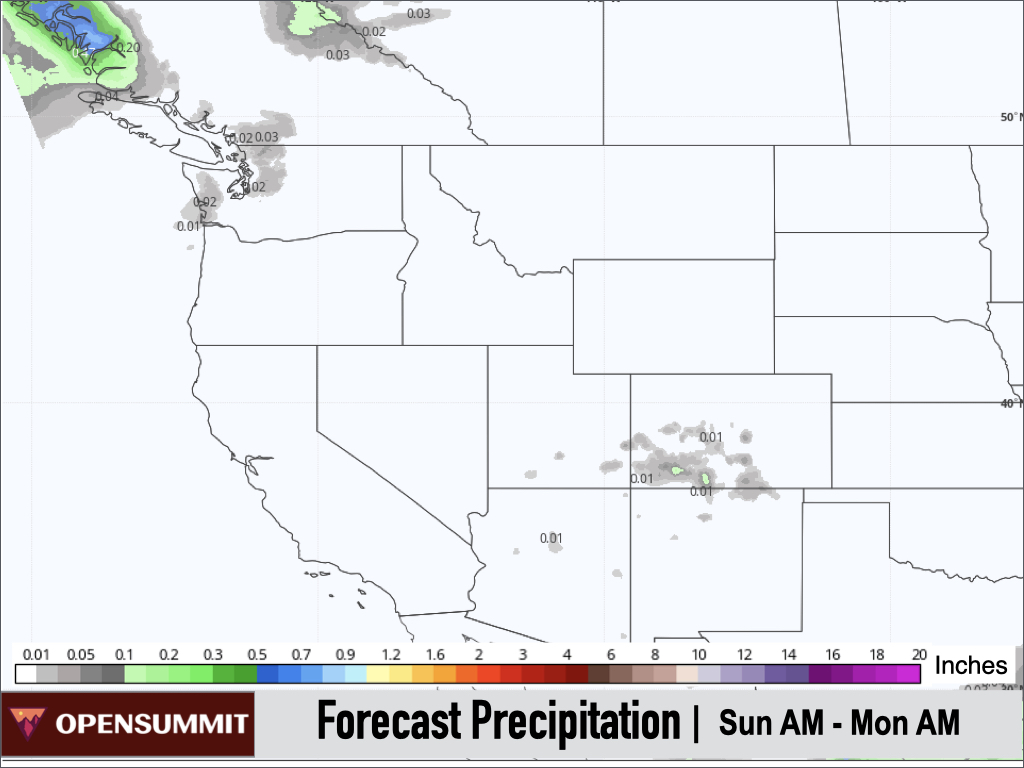 Isolated light showers will be possible across New Mexico and Eastern Arizona with drier conditions further north. After a dry day across the Pacific Northwest on Monday, a storm will reach the coast on Monday night with rain developing over the Olympic Peninsula. 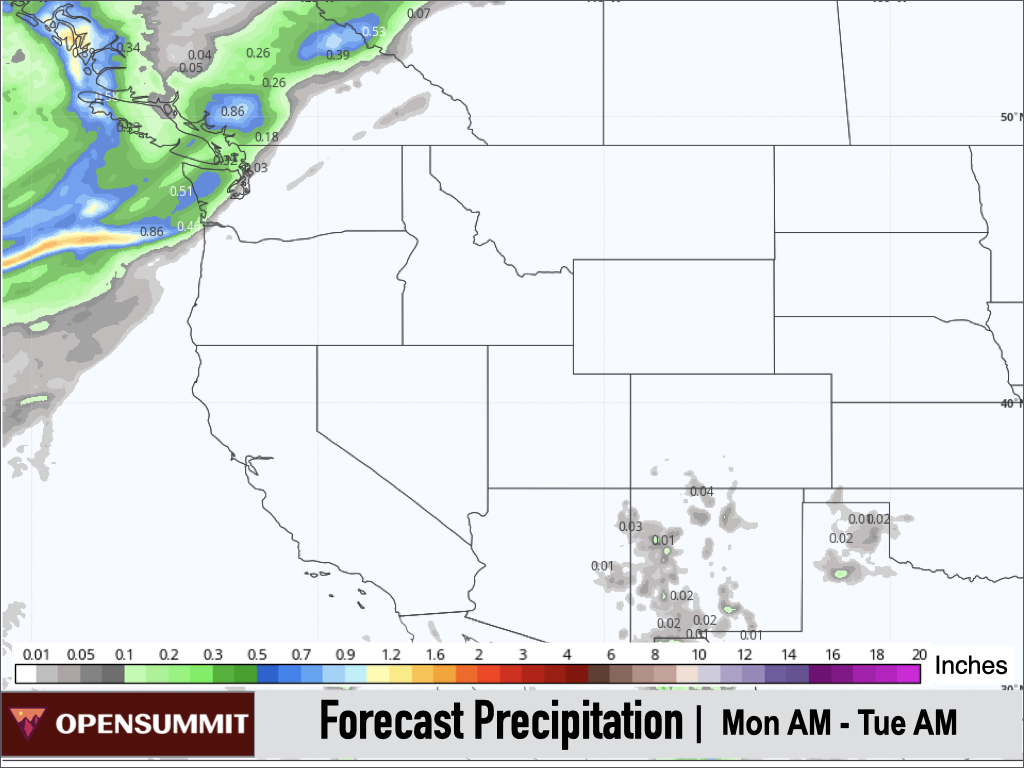 Showers will become more widespread over the Washington Cascades on Tuesday with lighter showers for the Oregon Cascades. A storm developing over the Southwest will also lead to an uptick in showers (including high elevation snow) across the Four Corners region, especially Arizona, New Mexico, and Southwest Colorado. 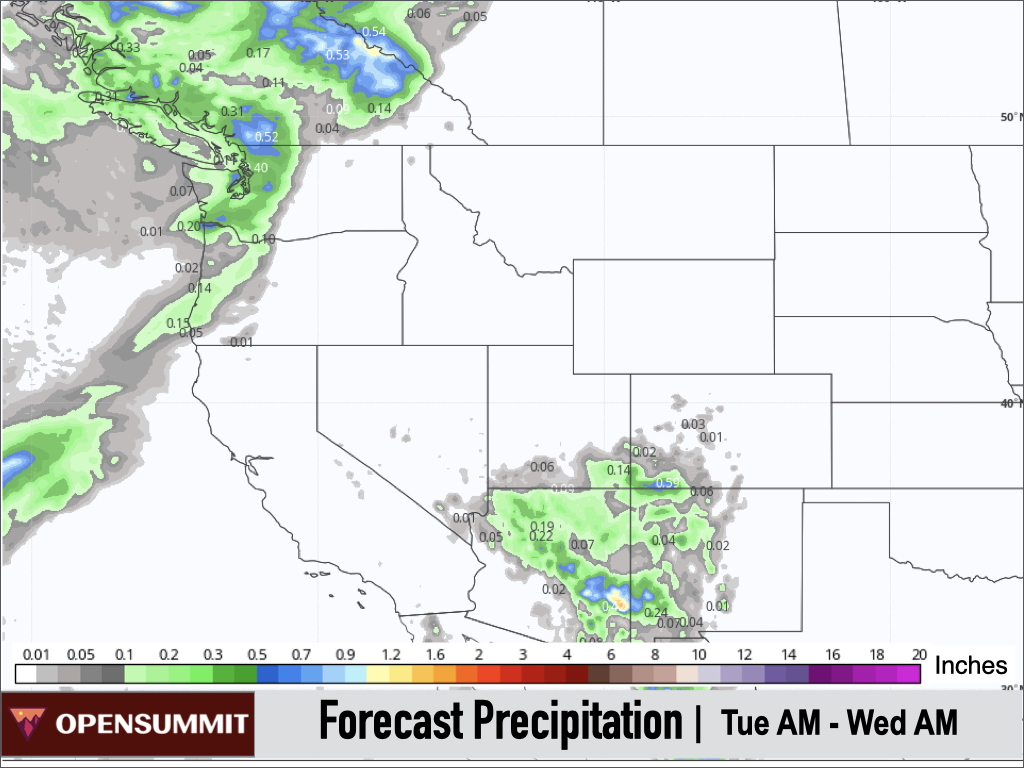 A slow-moving storm system is expected to impact most of the West late next week and into the first weekend of October. Some mountain areas could see their first widespread snow accumulations of the fall season. 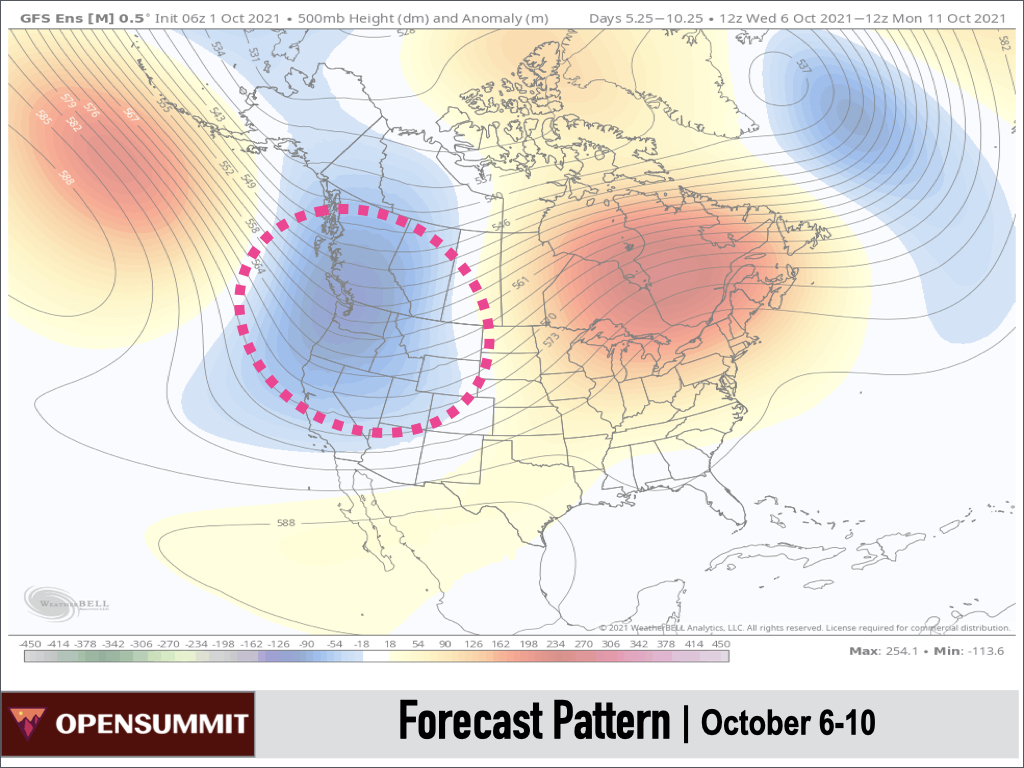 Temperatures will trend colder from west to east as this pattern change evolves, with lowering snow levels also expected. 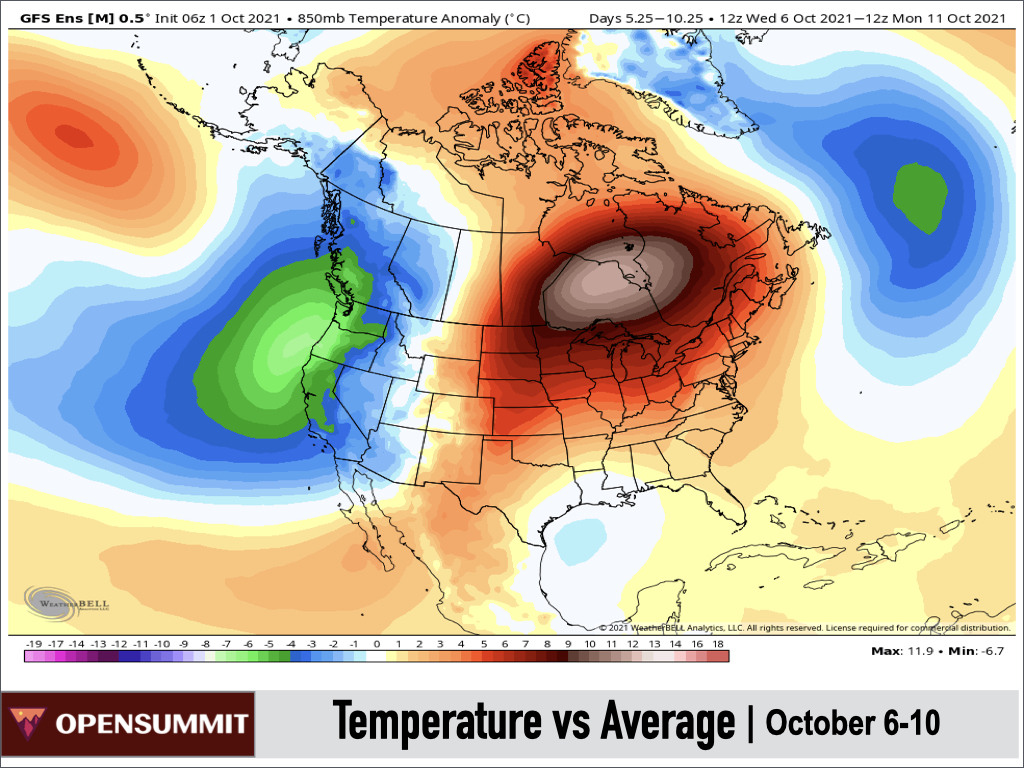 Looking farther out, a fairly active pattern is expected to continue across the West through mid-October with below-average temperatures and good chances for mountain snow.

This is my last post of the season for the Daily Summit in 2021. Next week, we will start to transition into winter mode and will begin updating the US & Canada Daily Snow on OpenSnow every Monday, Wednesday, & Friday through the end of March.

Thank you so much for reading the Daily Summit this season! We anticipate resuming our Daily Summit posts in May 2022. Also, look for a number of new and exciting features that we plan to release for OpenSummit next year to further help you plan your outdoor adventures.

If you haven't already, be sure to check out OpenSnow – our winter snow and weather forecasting service that has been helping skiers/riders plan their powder days for a decade.

On OpenSnow, our goal is to create the most accurate snow forecast, period. Our snow forecasts come from a proprietary blend of global model data and high-resolution model data taking elevation and topography into account.

Forecasts are available for ski resorts, backcountry areas, cat/heli ski areas, and nordic ski areas throughout the world. In addition, we have a team of local forecasters who provide written discussions and graphics for ski regions throughout North America to help you plan your days on the slopes.

Also, if you haven't already, make sure you sign up for All-Access to take advantage of the best features and services to help you find the best powder. It costs less than a cup of coffee per month and includes full access to both OpenSnow and OpenSummit for year-round weather coverage.