The Mid-Atlantic region is a diverse geographic area containing 50 ski resorts. Resorts range from those seeing the most snow in upstate New York to regional favorites in southern Virginia and West Virginia that can see large Nor’easters. Every resort in the Mid-Atlantic presents unique opportunities to skiers and riders, with vastly different weather conditions from Virginia to New York.

The Mid-Atlantic region is often dismissed for its lack of snow and small terrain compared to the West and New England but there are hidden gems and powder pockets to be found. The accessibility to a wide variety of terrain and weather conditions from small towns to big cities make the Mid-Atlantic a great place to follow the weather for the best ski and ride conditions. If it is raining near you along the coast, head a couple more hours inland for some freshies!

In my Daily Snows, I group resorts by sub-region: Northern, Western, Eastern, Central, and Southern. This means that each sub-region will see different weather and snow amounts creating a unique ski and ride experience at each resort. In this article, I will go over the definitions of each sub-region, a general overview of the weather pattern, and which resorts are in them. Find the region that you ski and ride in below! 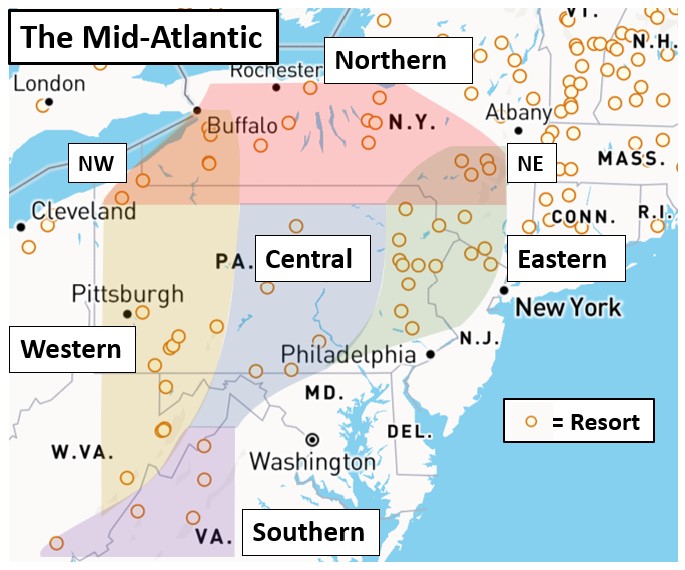 The northern Mid-Atlantic is one of my favorite areas to ski. A big lake effect event around the Finger Lakes can rival west coast powder and the low-key vibes make it great for family and friends day or night. The Catskills are the biggest terrain that the region has, and is less than a couple hours from New York City.

The northern and western Mid-Atlantic can rival resorts throughout the country in snow amounts due to lake effect snow and large Nor’Easters. These areas have diverse terrain and can be awesome on powder days. They are only a few hours away from the big East Coast cities, making them easily accessible for a long weekend. As you get closer to the I-95 corridor, the resorts in the Catskills of New York are the highest terrain in the region and can get big snow totals from Nor’Easters.

The Mid-Atlantic region is where I grew up skiing and learned to study meteorology. The weather and terrain are diverse, which allows for all abilities to find their favorite trail and snow conditions within a couple of hour's drive. The sub-region breakdown above allows me to communicate where the best skiing and riding is for you, as well as local tidbits for each sub-regions personality and common weather conditions.