For this article, I am using the stats reported by Berkeley's Central Sierra Snow Lab, which is located northwest of Lake Tahoe near Donner Summit, CA at an elevation of 6,894 feet. Other areas of the northern Sierra and at varying elevations may have seen slightly different numbers, especially higher in elevation where more snow tends to fall.

The data records available for daily and monthly precipitation and snowfall amounts start in the fall of 1970 when Berkeley took over monitoring the weather at the Snow Lab in Soda Springs, CA. That is the base period I will be using for the stats and graphs below. I will reference the 52-year average which is the 70/71 season through the 21/22 season.

We have annual snowfall records back to the 1800s when the railroad was in charge of keeping records. The new station manager at the Snow Lab is working to gather and digitalize the records prior to 1970, and we hope to be able to use those in our reports in the future.

The Start of the Season:

October was the 4th driest on record since 1970 with only 0.3 inches of total precipitation recorded, and only 1 inch of snowfall. That changed quickly to start November with 6-12 inches of snow falling on the mountains on November 1st. That would be how we would kick off one of the snowiest 1st halves of the winter season on record.

The storms continued through the 1st two weeks of November, with the ski areas reporting 1-5 feet of snow in total by 11/13/22. The Snow Lab recorded 55 inches of snow, which is 149% of the 52-yr average of 37 inches. Then the storms stopped on the 14th with no more snowfall being recorded through the end of November.

There was a week system on the 30th that dropped light snow, but the stats are officially recorded the next day at 8 AM, which was December 1st. But that's all we needed to finish November with above-average snowfall. 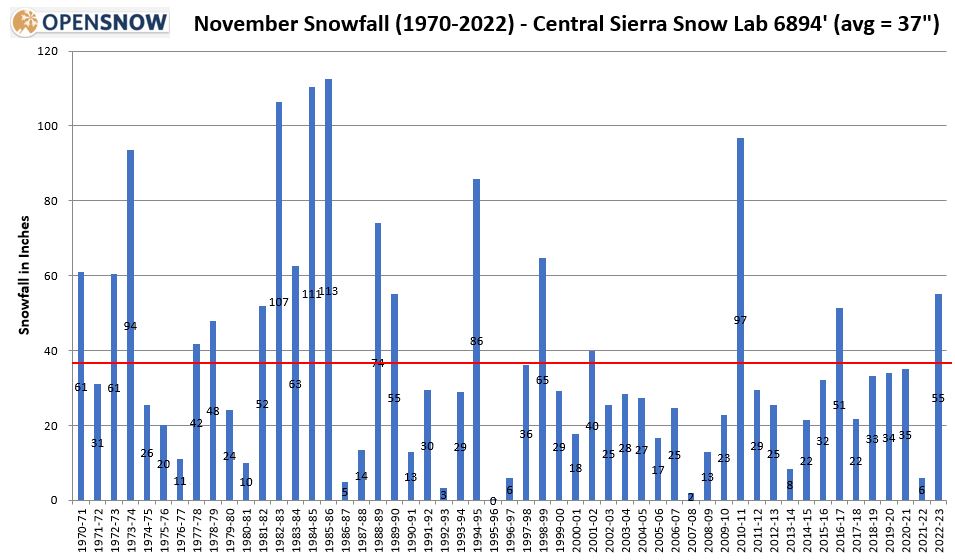 The storms that we saw during the 1st half of November were colder than average with mainly all snow falling and higher snow:liquid ratios than average. Therefore 6.1 inches of total precipitation for the month was actually below average (81%) even though the snowfall was above average. 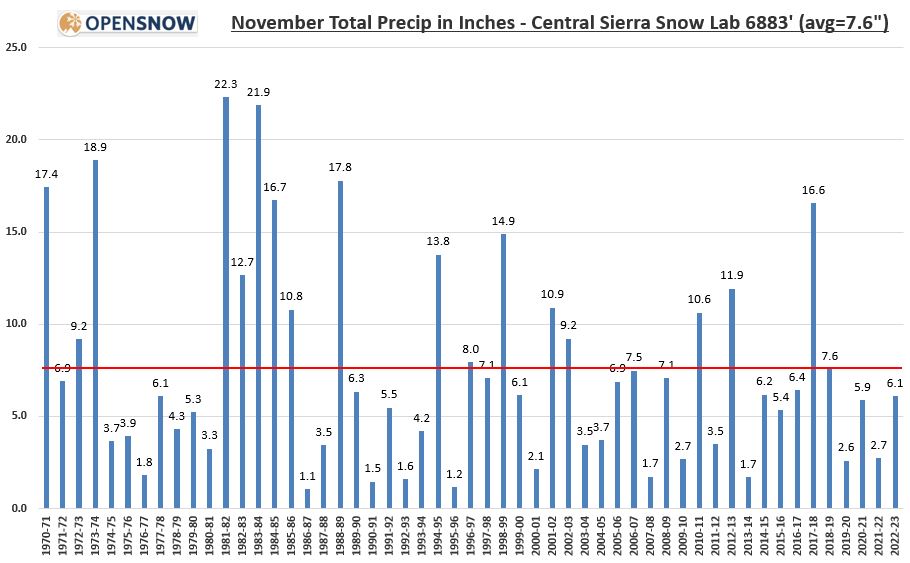 December also started off with a bang as a storm moved through on the 1st day of the month and dropped 1-2 feet of new snow on the northern Sierra. It stayed fairly active through the 12th of the month. Then we saw a drier period for two weeks through the 25th.

Then the storms returned the day after Christmas through the end of the month, with snowfall reported every day. A big storm moved in on New Year's Eve, but that snowfall was recorded for January 1st. In total, the ski areas reported 7-12 feet of snow in December, and the Snow Lab recorded 125 inches! 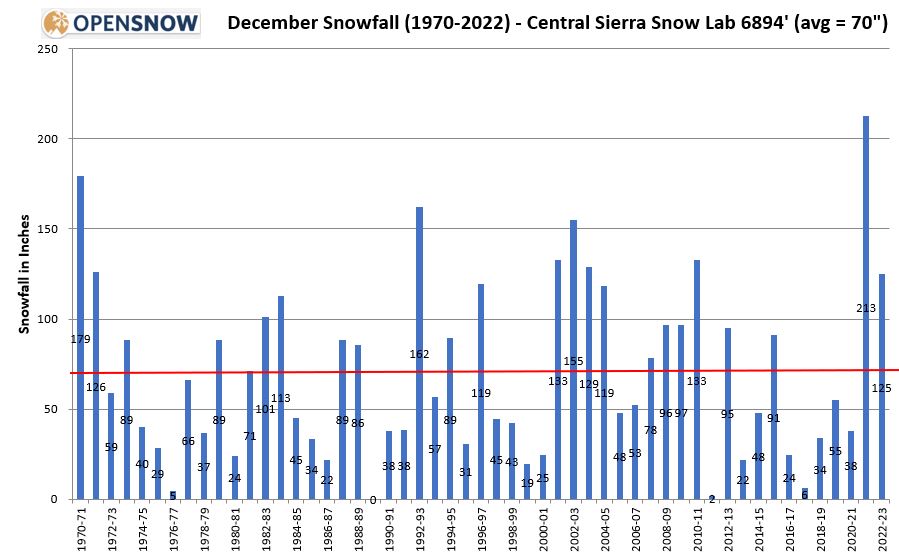 In contrast to November, December had wetter storms with some rain falling at times as well. The total precipitation recorded at the Snow Lab for December was 20.2 inches, which is 193% of the 52-yr average. That is 14% higher vs the average than the snowfall total and it was the 7th wettest December since 1970. 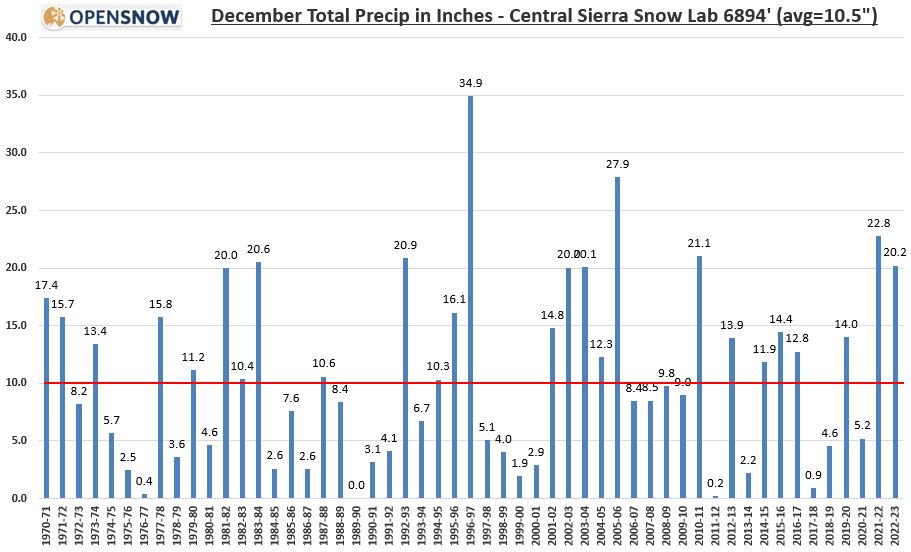 This article is being written on 1/20/23, so the month of January isn't finished yet, but it has already been impressive. We started off the month with 2-3+ feet of snow from the storm that moved in on New Year's Eve. Then the onslaught of wet storms continued with only 4 of the first 19 days of the month that didn't have snowfall recorded.

As of 1/19/23, the ski areas have reported 9-18 feet of snow already for the month! The Snow Lab has officially recorded 175 inches so far for January, which is already 249% of the 52-yr average of 70 inches for the entire month of January. We are currently tied for the 2nd snowiest January since 1970. 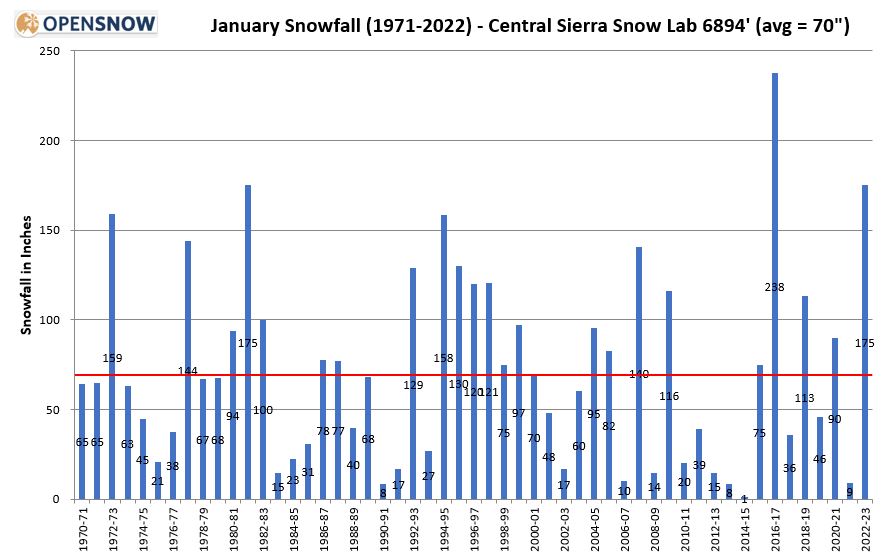 If was saw no more snow the rest of the month (which is possible looking at the forecasts but we could see a little snow around the end of the month) we would end up with January 2023 being tied for the 8th snowiest "month" on record since 1970. 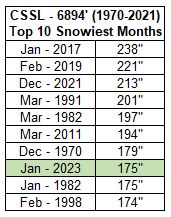 Looking at the total precipitation so far in January, the Snow Lab has recorded 21.3 inches so far. That is already 217% of the 52-yr average, which makes this the 4th wettest January since 1970 so far. 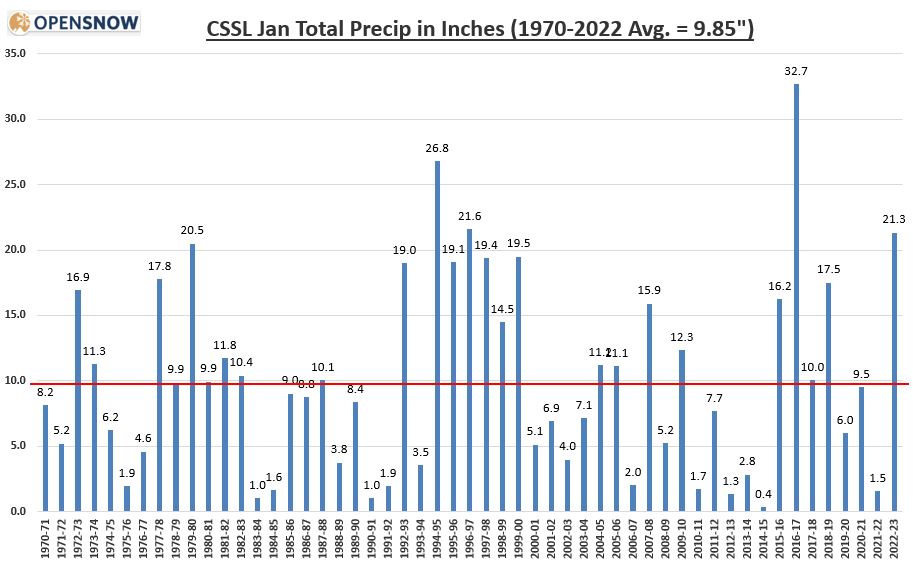 You can see that the storms are running colder or with more snow than rain on average so far for January as well, which is why snowfall is at 249% of the average for January while precip is running at 217%. Both are very impressive numbers!

Totals So Far This Season: 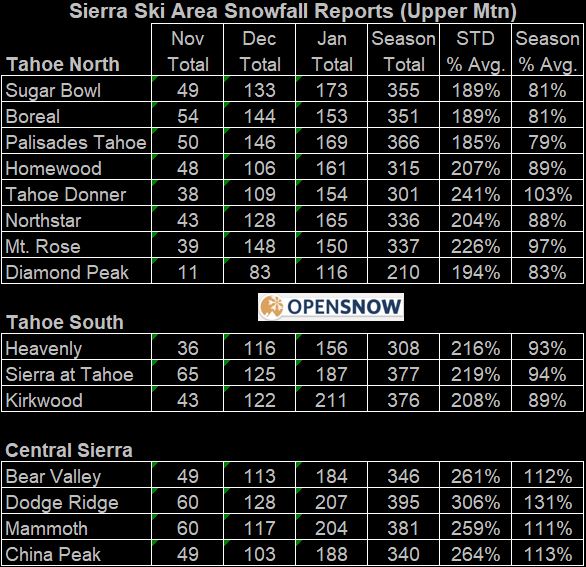 The northern Sierra ski areas in total are averaging 208% of average snowfall for the date, and 89% of the average for the entire season!

The Snow Lab has recorded 357 inches of snow so far this season. That is 217% of the 52-year average for the date, 190% of the Oct-Jan average, and already 93% of the average for the entire season! This is a record for the snowiest Oct-Jan period since 1970.

Here is a look at the total snowfall recorded for each month so far this season (orange) versus the average for various time periods (see legend). 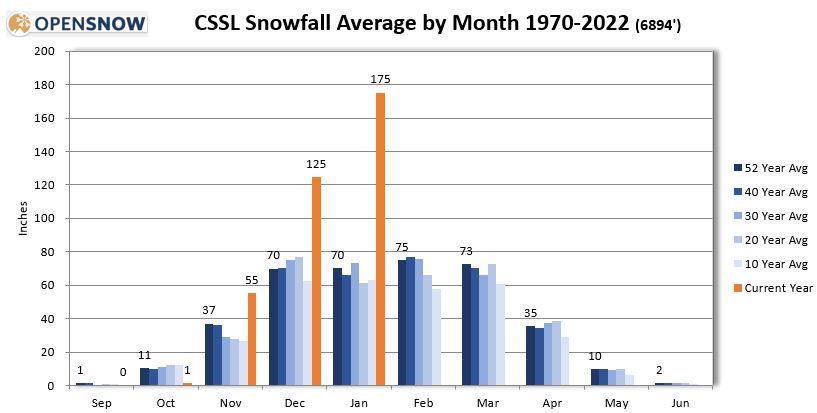 The total precipitation recorded so far this season is 48 inches which is 151% of the 52+yr average for Oct-Jan. That makes it tied for the 7th wettest Oct-Jan period since 1970. 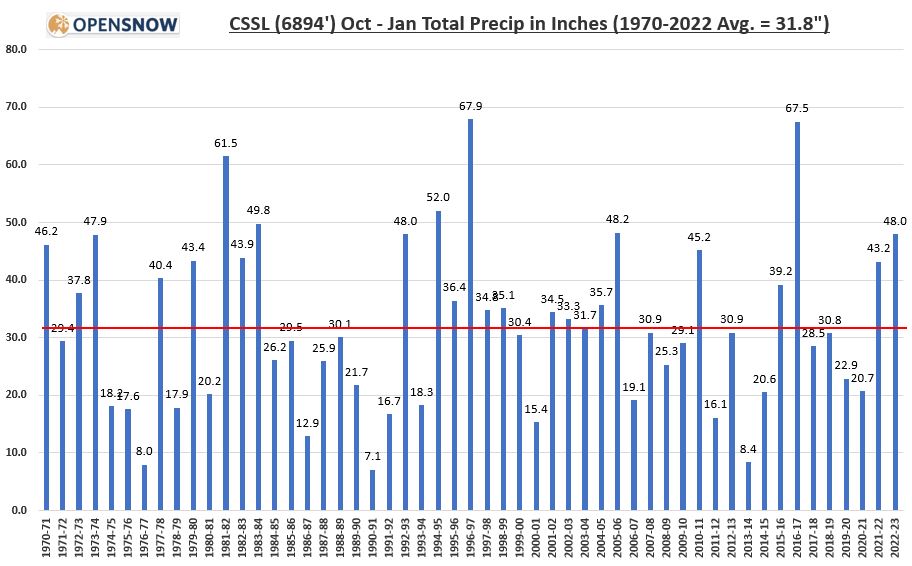 Here is a look at the total precipitation recorded each month so far this season (orange) versus the average for various time periods (see legend). 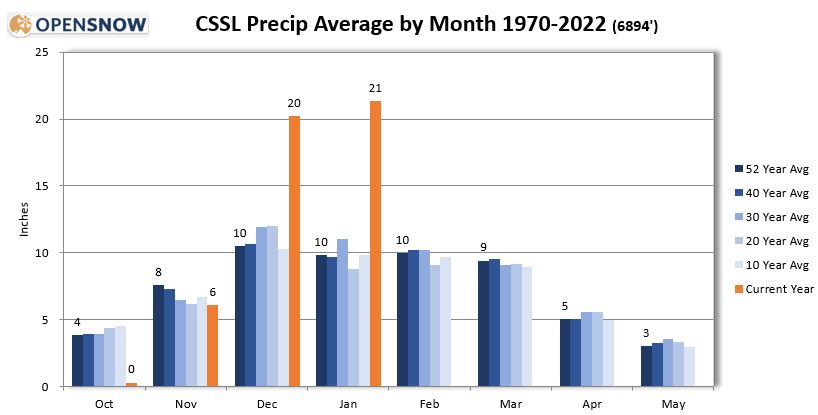 The precipitation totals are looking healthy for much of the southwest so far this season.

Overall the total precipitation vs the average so far this season is running 39 percentage points lower than snowfall. As I explained above, that happens when we have colder storms than average with more snow & less rain and higher snow:liquid ratios. 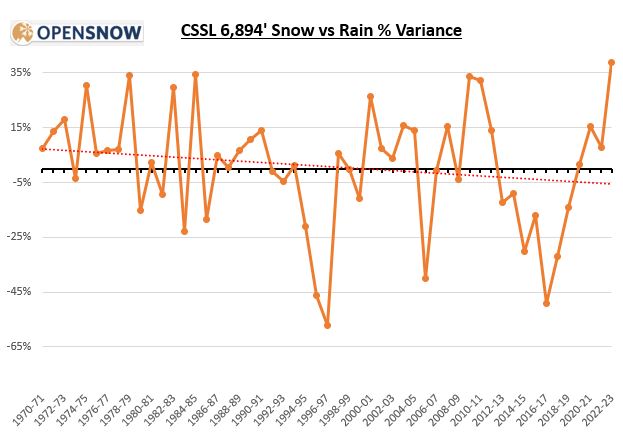 You can see that we have seen colder storms than average for a few seasons now with this season so far being the coldest on average for storms. But overall the trendline has been heading down since 1970 as the storms have trended warmer with more rain than snow vs the average.

The other 52-year record we set, besides the Oct-Jan snowfall total, is the snowpack. We are running at 191% of the average for the date which is the highest on record. The peak snowpack on average is measured at the end of the season on April 1st. We are already at 99% of that average! 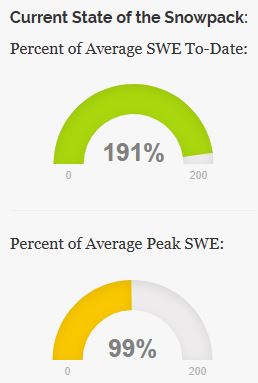 The snowpack for most of the Sierra and to our east is also looking very healthy for this time of year. Some stations have recorded over 200% of the average for the date!

The season so far has been wet and snowy. Despite a lot of hype and record-setting numbers in other areas, the northern Sierra is not seeing record-setting precipitation amounts so far this season and hasn't set any monthly snowfall records. The two records so far are for total snowfall for Oct-Jan and snowpack.

But the base period for the records only goes back to 1970 as I explained at the beginning. One of the biggest snowfall seasons was 51/52 with 800 inches recorded at the Snow Lab. Once we have the daily records available we may see that seasons prior to 1970 like 51/52 saw higher Oct-Jan snowfall and snowpack.

But this is a great season so far and we need the snow and rain to refill the reservoirs after a few dry years. We are running ahead of the 82/83 season for snowfall so far, which is the snowiest on record since 1970. 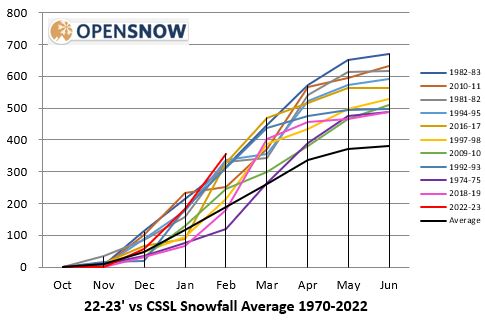 We only need 27 more inches of snow to have an above-average snowfall season, so that should be in the bag at least (knock on wood). We'll tally up the totals at the end of the season and see where we fall!