Thunderstorms come in a variety of shapes in sizes. The manner in which a thunderstorm forms and behaves can impact outdoor recreation in different ways, and this article will dive into the four primary types of thunderstorms that form in the U.S. We will also examine the difference between "wet" and "dry" thunderstorms and how it relates to fire danger.

Last week's article focused on the key ingredients for mountain thunderstorms which include moisture, instability, and lift. However, there is also a fourth ingredient – wind shear – which is not a driving mechanism for thunderstorm development by itself, but does influence thunderstorm type along with the other three ingredients.

What is Wind Shear and Why is it Important?

Wind shear describes the change in wind speed and wind direction as altitude increases. Wind speeds that increase more rapidly with height can tilt a thunderstorm's updraft forward, enough so that the updraft becomes separated from the downdraft.

This separation between the updraft and downdraft is important because it allows the updraft (which fuels the thunderstorm) to sustain itself for a longer period of time because rain and cooler air (which is a part of the downdraft) will descend well out ahead of the updraft instead of right on top of it.

All other things equal, a storm with little or no wind shear will result in rain and cold air falling directly into the updraft, which will kill off the storm more quickly and result in a shorter-lived event compared to a storm with stronger wind shear. 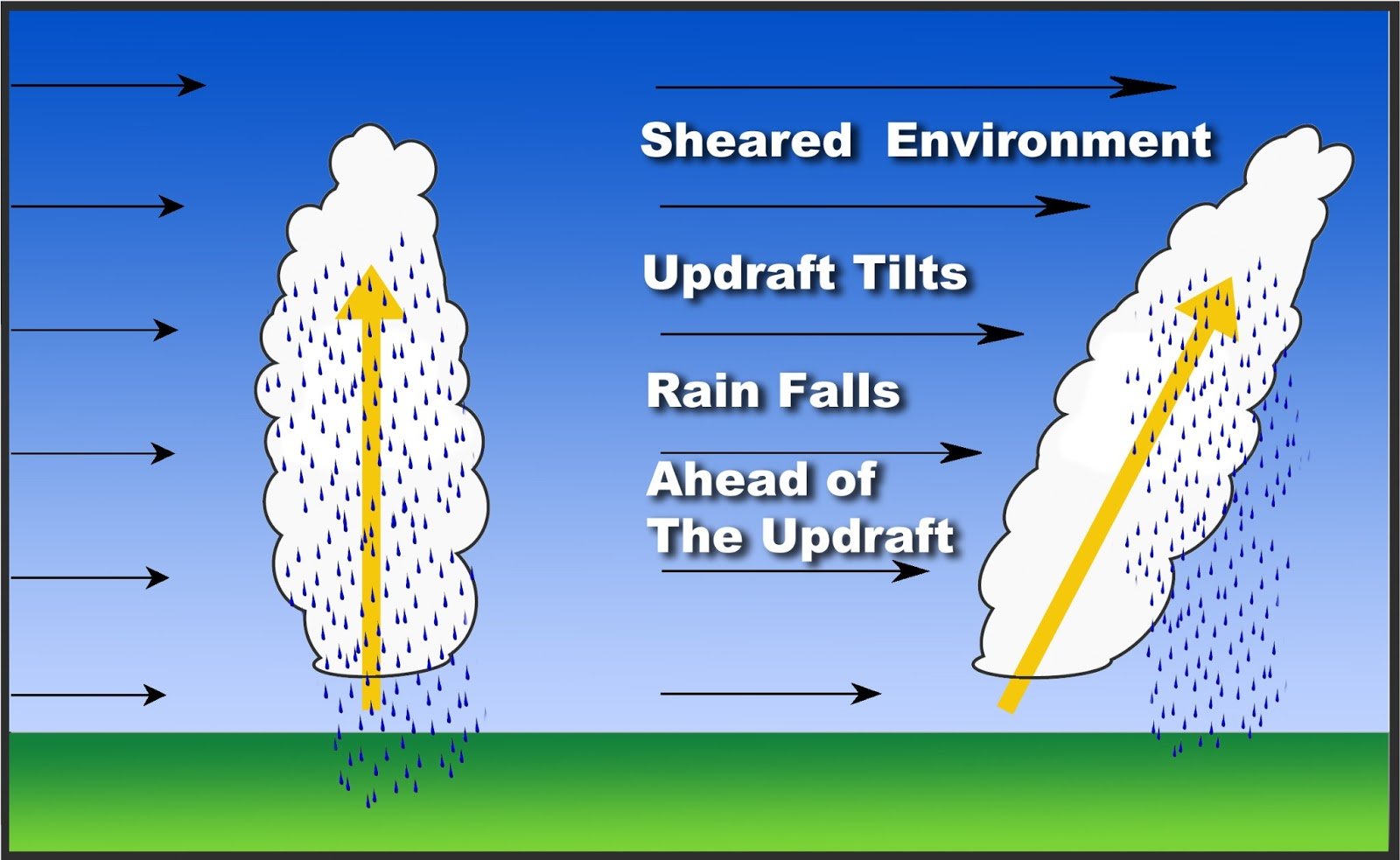 In addition to the magnitude of wind speed increases with height, winds that change direction with increasing altitude can also influence storm behavior. In particular, winds that turn counterclockwise – or veer – with height can cause a storm to rotate when vertical wind shear is also significant.

The magnitude of wind shear, in addition to the amounts of moisture, instability, and lift all influence the type(s) of thunderstorms that develop on a given day.

Oftentimes, other (but not all) ingredients are marginal during single-cell thunderstorm set-ups. For example, instability could be decent but moisture levels may be marginal, but just enough for a stray afternoon thunderstorm to develop near the crest of a mountain range.

Single-cell storms can also form when moisture and/or instability are abundant, but when a stubborn capping inversion is in place and lifting mechanisms are weak, allowing only isolated short-lived storms to develop over higher terrain.

Single-cell storms may be less intense than other types of storms, but they can also be very dangerous in the mountains since they still produce cloud-to-ground lightning and they may develop rapidly when conditions did not previously seem visually obvious for thunderstorm development.

In addition to lightning, single-cell storms can also produce very strong wind gusts, especially if moisture in the atmosphere is limited (when rain evaporates as it falls, the evaporation process causes the downdraft winds to accelerate). Heavy rain and hail are possible with single-cell storms when moisture levels are higher but tend to be short-lived.

Multi-cell clusters are more likely to develop when greater amounts of moisture and instability are present, and when lifting or "trigger" mechanisms are stronger and/or more abundant. Wind shear is not necessarily a requirement for multi-cell clusters, but it can affect the speed and organization of these thunderstorm clusters.

Typically, clusters will start out as a single-cell thunderstorm, but outflow winds from the initial storm will trigger new thunderstorms nearby that eventually form into a larger cluster, with individual cells within the cluster strengthening and weakening simultaneously.

When wind shear is moderate to strong, multi-cell clusters tend to be stronger and faster-moving with frequent cloud-to-ground lightning, gusty winds, hail, and heavy rain. In rare cases, brief tornadoes can form in multi-cell clusters.

When wind shear is weak and moisture levels are high, heavy rain and flash flooding become a greater concern because the cluster will be slower-moving and in some cases may stall over an area for an extended period of time.

Multi-cell clusters (but fast-movers and slow-movers) are common during monsoon season across the Southwest U.S. and Southern Rockies.

Whereas a multi-cell cluster often takes the shape of a large "blob" on radar, a multi-cell line will appear as a cleaner and more organized linear shape, often taking on a bow-like appearance. More intense lines are often referred to as squall lines.

Lines of thunderstorms typically develop when wind shear is strong and there are significant and progressive lifting mechanisms approaching, such as a cold front or a strong upper air disturbance. Lines can sometimes be quite extensive in length and can also persist for a long period of time. As a result, lines tend to impact a larger geographic area compared to clusters.

Thunderstorm lines tend to be faster-moving but intense events and can produce strong winds, frequent cloud-to-ground lightning, hail, and brief heavy rain. In mountain environments, lines of thunderstorms are somewhat more predictable if you're aware of the potential beforehand, but also dangerous in the sense that they approach quickly due to faster storm motions.

Thunderstorm lines are typically strongest across the Central and Eastern U.S., and in terms of mountain environments, are more likely to produce severe weather across the Appalachian Mountains, including damaging straight-line winds, large hail, and even brief but damaging tornadoes.

The severity of squall lines tends to be limited across the West compared to the East. However, a widespread and long-lived line of storms that produced destructive winds, known as a derecho, moved across the Colorado Rockies in June 2020.

There is one exception to the "fast-moving" nature of multi-cell thunderstorm lines. In some cases, a wind convergence zone or stalled frontal boundary will set up over an area, resulting in a line of nearly stationary thunderstorms, which behave more like a cluster than a line.

Supercells are the rarest type of thunderstorm, especially in the mountains, but also the most dangerous. Supercells require significant amounts of moisture, instability, wind shear, and also a potent lifting mechanism to "set things in motion".

Supercells also form as isolated "discrete" cells as opposed to multi-cell structures, and the storms are able to strengthen and persist without interference from other storms.

Supercells occur most frequently and produce the most hazardous weather in the Central U.S. but they are also somewhat common in the Appalachians during the spring, early summer, and occasionally the fall.

Supercells are rare west of the Continental Divide due to significant terrain influences on moisture and wind profiles compared to the Central and Eastern U.S., but they can occasionally form when the conditions are just right.

Here is a visual depiction of the "idealized" structure of a supercell. 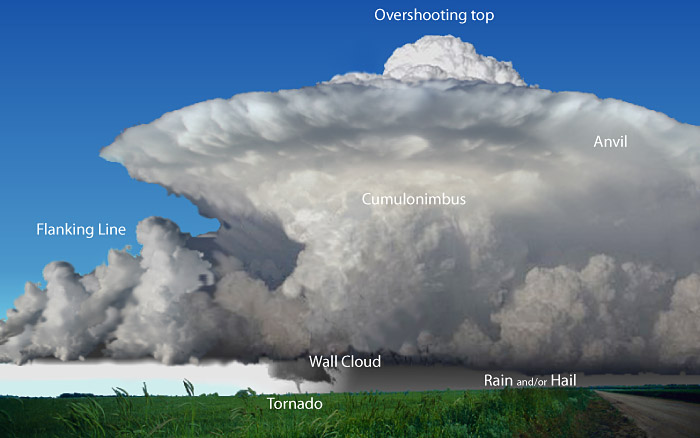 While the four types of thunderstorms above describe various modes of storm behavior, when it comes to summer fire danger in the Western U.S., the most important factor comes down to the simple designation between "wet" and "dry" thunderstorms.

Dry thunderstorms occur in environments when moisture levels are marginal, but there is still enough instability for isolated thunderstorms to develop. These are also known as "high-based" thunderstorms, meaning the base of the storm cloud is more elevated than usual.

During dry thunderstorm setups, much of the rain that falls from the storm evaporates before reaching the ground. This results in only brief/light rainfall along with strong outflow winds.

Cloud-to-ground lightning still occurs with these thunderstorms, and in an otherwise dry environment with little rainfall, lightning strikes can ignite new wildfires. Gusty winds that are typical of dry thunderstorms can also exacerbate matters by causing new or previous fires to rapidly spread or change direction.

Wet thunderstorms occur when there is more moisture in the atmosphere and moderate to heavy rainfall rates occur. Fires are less likely to ignite in these environments, and even if they do, they often are extinguished quickly by the associated rainfall.

Oftentimes, there are borderline set-ups in which there is a mix of wet and dry thunderstorms. This commonly occurs near the fringes of significant monsoon moisture influxes.