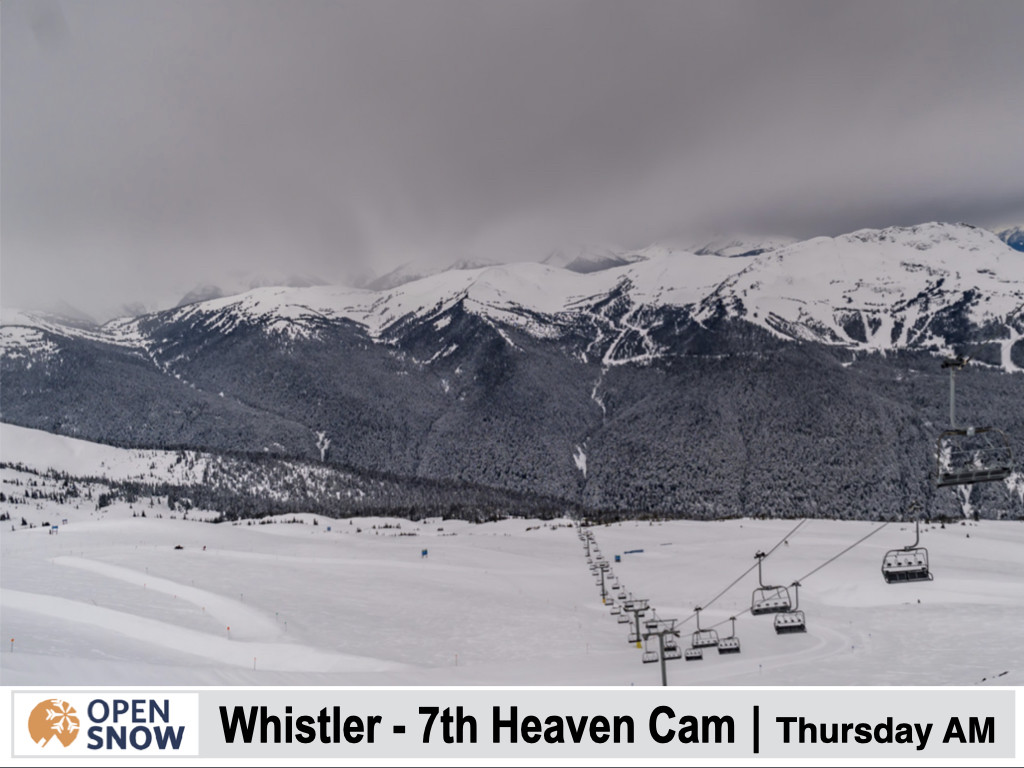 Whistler picked up 38 cm (15") of snow in 24 hours earlier this week and is reporting another 8 cm on Thursday morning. The latest storm is now moving southward into the U.S. with additional snow showers/flurries on Thursday followed by a gradual drying/warming trend Friday/Saturday. Snow showers return to the picture Sunday-Wednesday with varying snow levels but generally below avg temps.

A strong storm earlier this week on Monday-Tuesday followed by a weaker storm on Wednesday have produced significant late-season snow across Southern BC. Whistler has picked up over 46 cm (18") over the past 3 days or so. 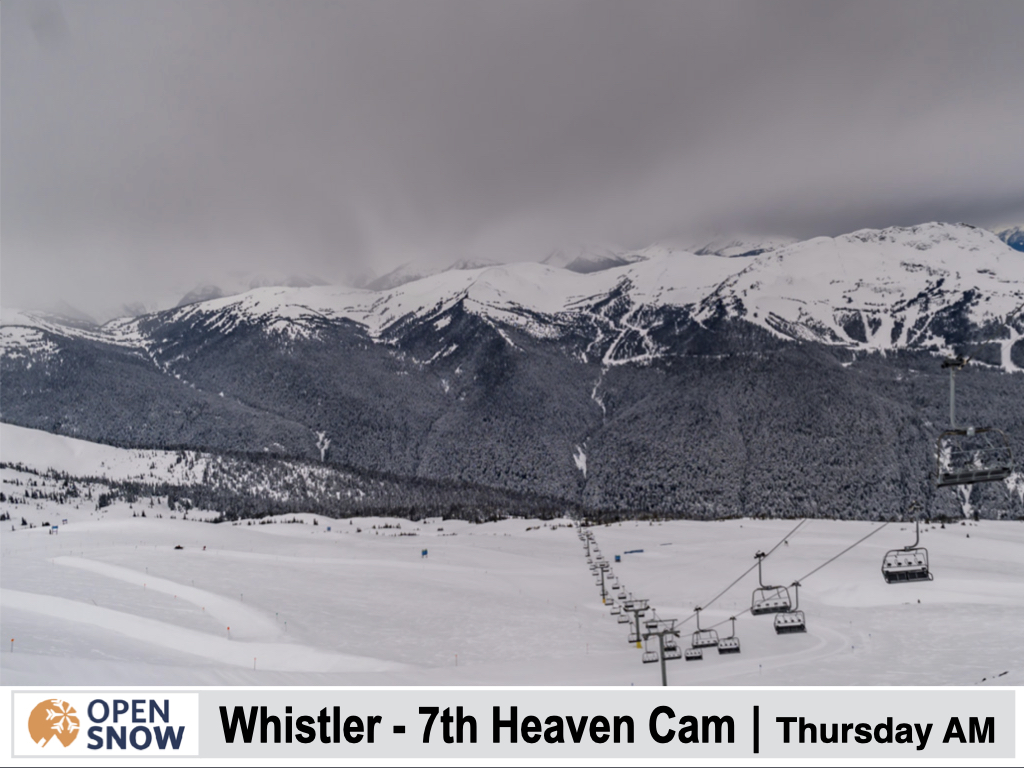 Thursday through Saturday will feature a gradual trend toward quieter weather and more spring-like skiing conditions.

Thursday will continue to be unsettled due to lingering moisture and instability, which will result in snow showers throughout Southern BC with additional snow amounts of 2-10 cm (1-4") for most mountain ranges. Snow levels will range from 1,100-1,400 meters (3.5-4.5k feet).

On Friday, conditions will start out dry with more sunshine early in the day, but then we'll see convective cloud build-ups in the afternoon with scattered snow showers/flurries developing. Snow showers will be more spotty in nature and mostly confined to the Interior with a trace to 5 cm possible. Snow levels will be similar to Thursday.

Saturday will be the nicest day for spring skiing throughout BC with warmer temperatures and more sunshine expected. We will still see some convective cloud build-ups on Saturday afternoon, but less extensive compared to Friday and most areas will stay dry save for perhaps some stray flurries over the Interior.

During the first half of next week, we will transition back to a more unsettled pattern as a trough of low pressure deepens off the West Coast with pulses of moisture and energy moving into BC during the Sunday to Wednesday timeframe.

This does not look like it will be a big storm by any means, rather a "spring showery" type of pattern with occasional rain/snow showers followed by breaks in between. 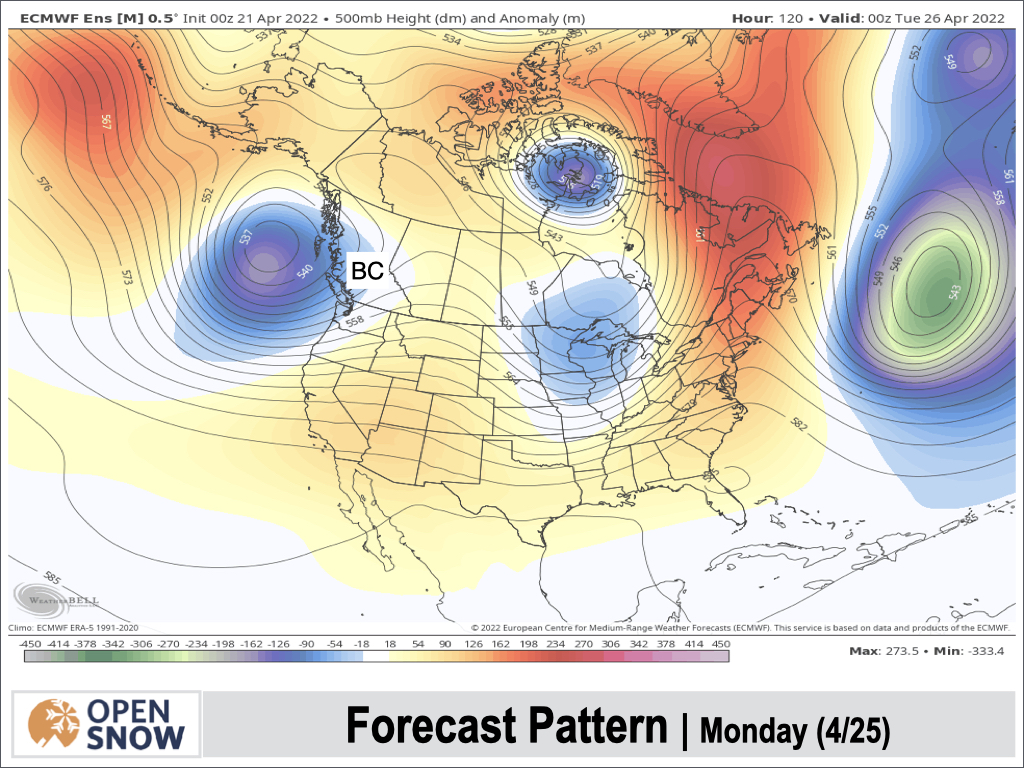 On Sunday, clouds will increase across the Coast Range and the Northern Powder Highway region around Revelstoke/Rogers Pass with rain/snow showers developing in the afternoon. These areas will also be favored on Monday.

The Southern Powder Highway Region including Kootenay Pass and east toward Fernie should stay dry/mostly sunny on Sunday with just a slight chance of rain/snow showers on Monday.

From Tuesday through Wednesday, rain/snow shower chances will increase across the Southern Powder Highway Region (Kootenay Pass to Fernie) while activity decreases a bit over the Coast Range. The Northern Powder Highway region (Revelstoke, Rogers Pass) should continue to see showers on Tuesday/Wednesday as well.

Snow totals above the rain/snow line could range from anywhere to a trace to 10 cm on any given day from Sunday through Wednesday, with variable amounts expected due to the convective/showery nature of this activity.

Looking further out, we should see decreasing showers chances from approximately Thursday (4/28) through Saturday (4/30), then a more active pattern with more frequent showers chances could return as early as Sunday (5/1) and continue through the first week of May.

Temperatures will generally be cooler than average throughout the extended period with day-to-day fluctuations in snow levels.

Thanks so much for reading! Next update on Monday (4/25).

SKI RESORTS THAT ARE STILL OPEN:

Whistler (open daily through May 23rd)