Strong storm on track for Wednesday 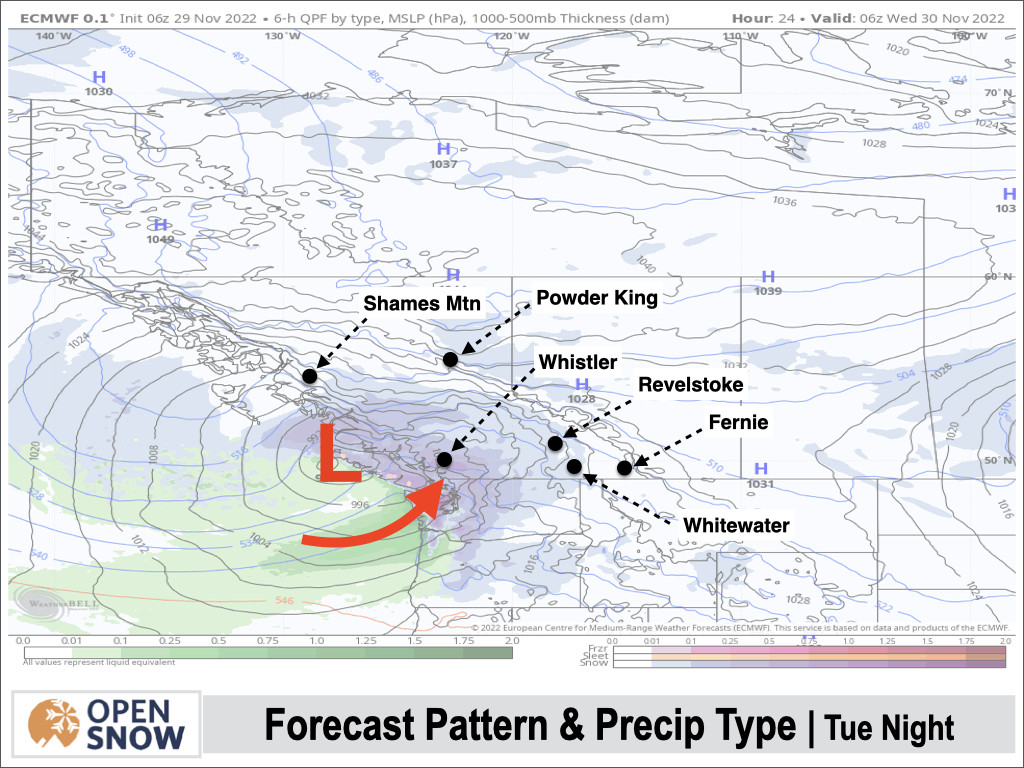 Arctic air has settled into BC, while a storm approaching from the southwest will spread moisture into Southern BC on Tuesday night & Wednesday, resulting in heavy snow, low snow levels, and good snow quality. Wed will be a storm skiing day while Thu AM may be the best time for freshies once winds & travel conditions have improved. We'll see additional light snow chances in the days to follow.

Last weekend's storm delivered the goods to much of BC, especially the Interior. In particular, the Okanagan region did very well with west/northwest winds on the backside of the storm and Apex was the big winner with 50 cm. Not all areas are reporting yet, but here are the storm totals from areas that are reporting:

A powerful storm remains on track to impact Southern BC. Arctic air has already settled into place across the province and will hold strong throughout this event despite a relative warm-up with snow levels staying well below ski resort base areas. Heavy snow accumulations will even occur down to sea level around Vancouver Metro on Tuesday night before changing to rain on Wednesday.

Snow is already underway across Vancouver Island and will pick up as the day progresses across the mainland Coast Range with heavy snow falling from Tuesday evening through about midday Wednesday. Snow will taper off to flurries across the Coast Range on Wednesday afternoon and Wednesday night.

Strong south/southwest winds can also be expected across the Coast Range on Tuesday night and Wednesday morning, before decreasing on Wednesday afternoon. 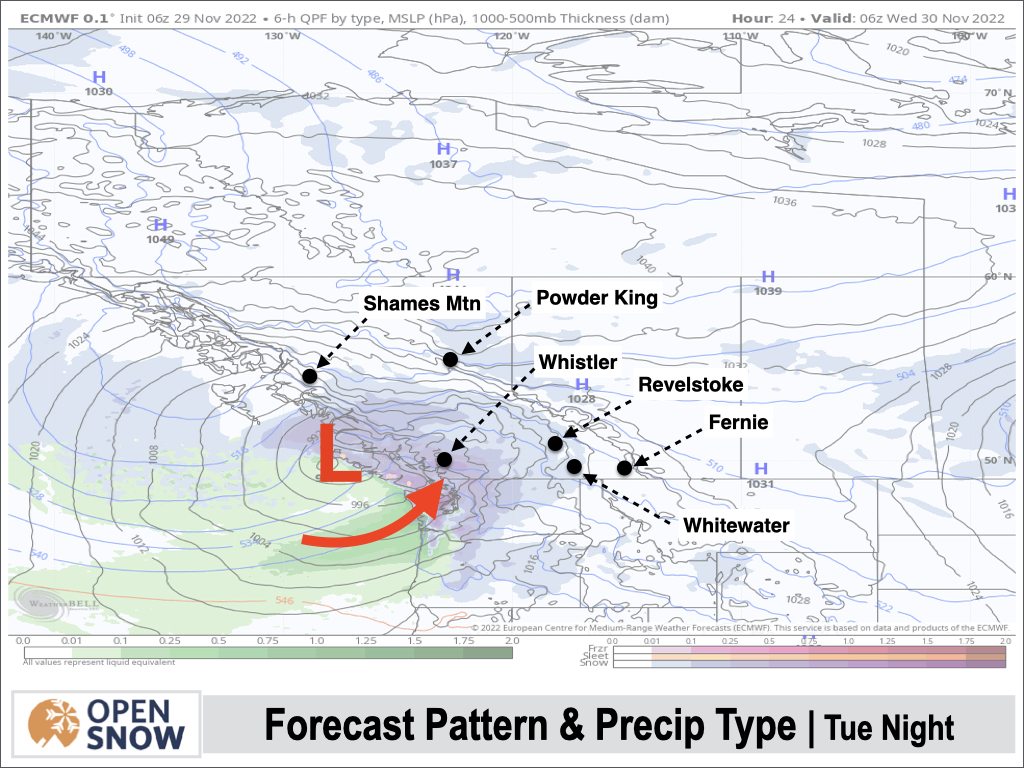 Snow will begin across the Okanagan region and Revelstoke on Tuesday afternoon then will become moderate to heavy across these areas on Tuesday night. Snowfall rates will start to pick up around Red and Whitewater on Tuesday night as well. 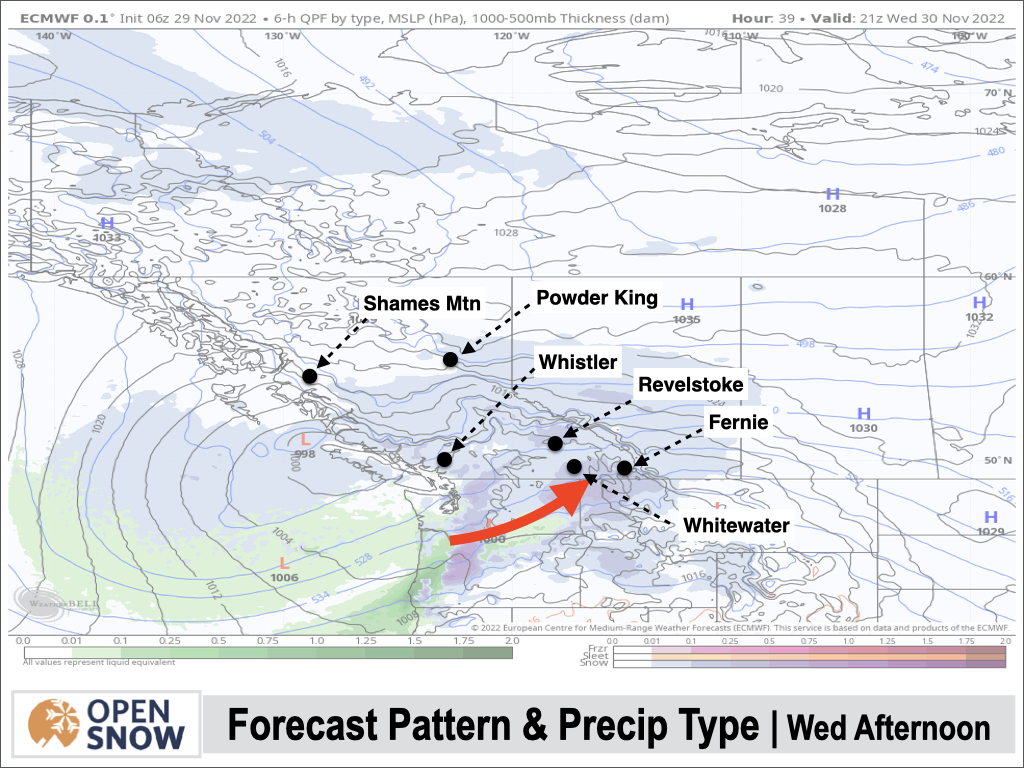 For the Coast Range, I'm expecting snow totals to range from 30-60 cm (12-24") at Cypress, Grouse, Seymour, Sasquatch, and Mt. Washington. Snow totals will be slightly less further north and east, ranging from 15-40 cm (6-16") at Whistler and Manning Park. This will be a drier and more powdery snowfall than usual as well thanks to the cold air in place.

Wednesday will offer the deepest conditions, and the afternoon hours may be the best once the winds start to calm down a bit. Travel conditions will also be difficult out of Vancouver on Wednesday, but Thursday morning should still offer fun conditions (and with better visibility/lighter winds) if you can't make it up Wednesday.

Below: Snowfall projection from the high-res Canadian Model 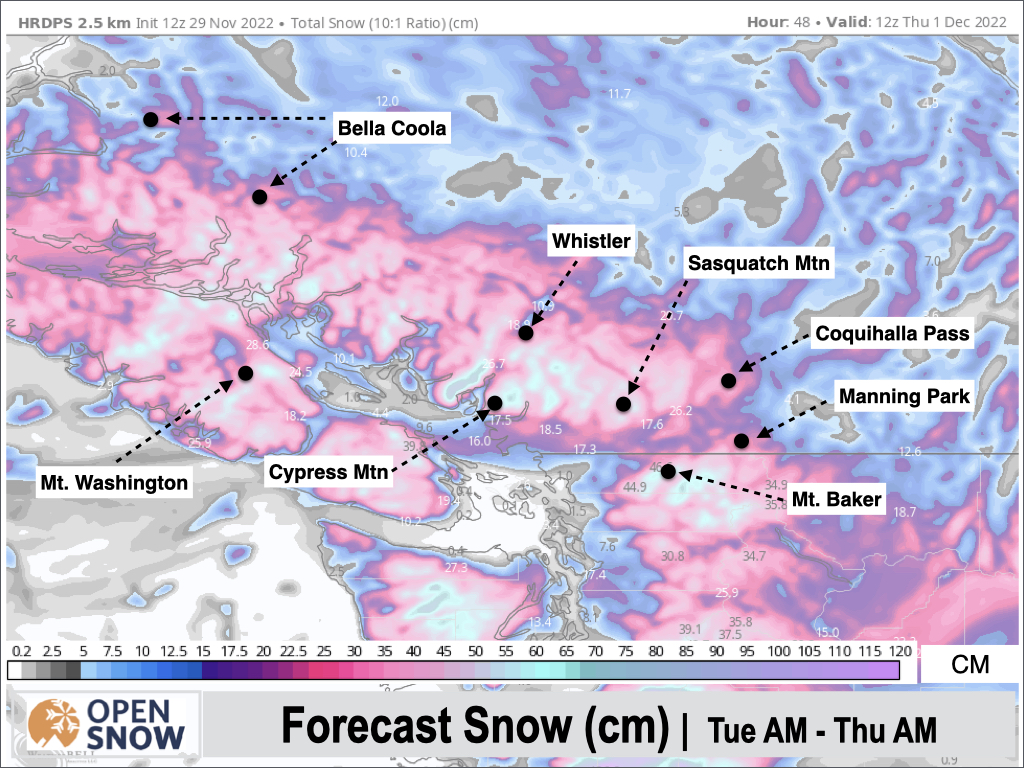 Across the Interior, the best moisture and energy will favor southern areas near the U.S. border from Big White to Fernie, while Revelstoke should also do well with southwest winds (though they could veer more southerly at times).

Here is my snow forecast in table form for the Interior: 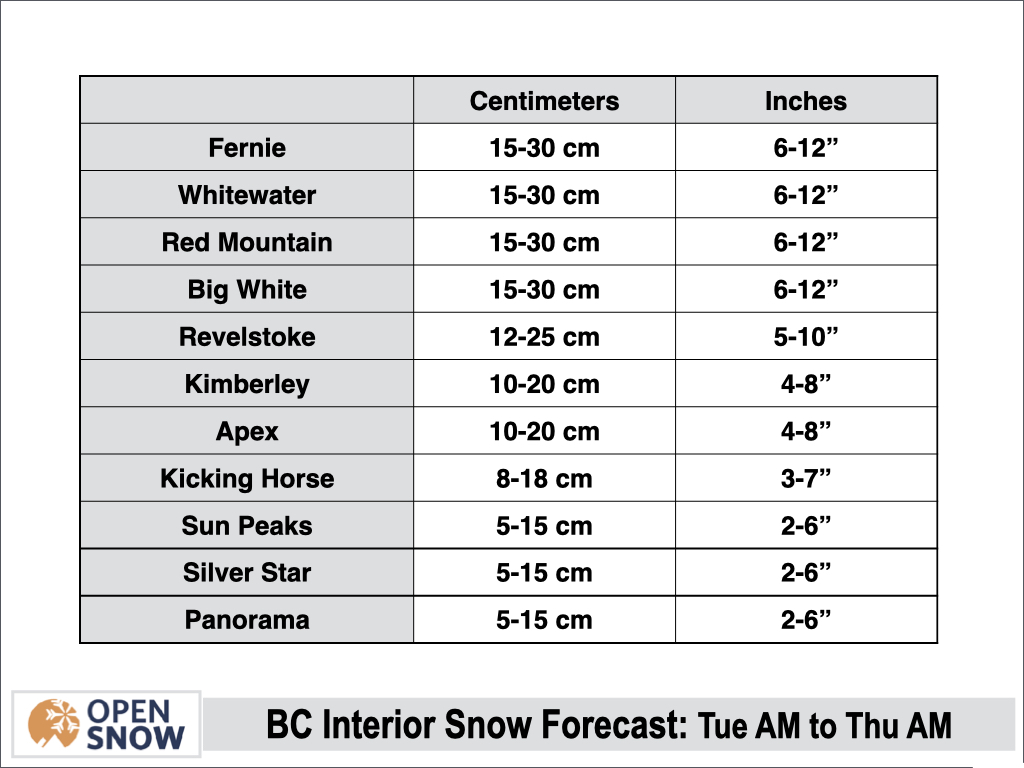 Below: Here is a graphical snow forecast from the high-res Canadian Model, which gives a good overall idea, though I think southern areas will do better than what this map indicates. Also note, this map assumes 10:1 snow-liquid ratios, while in reality ratios will be closer to 15:1. 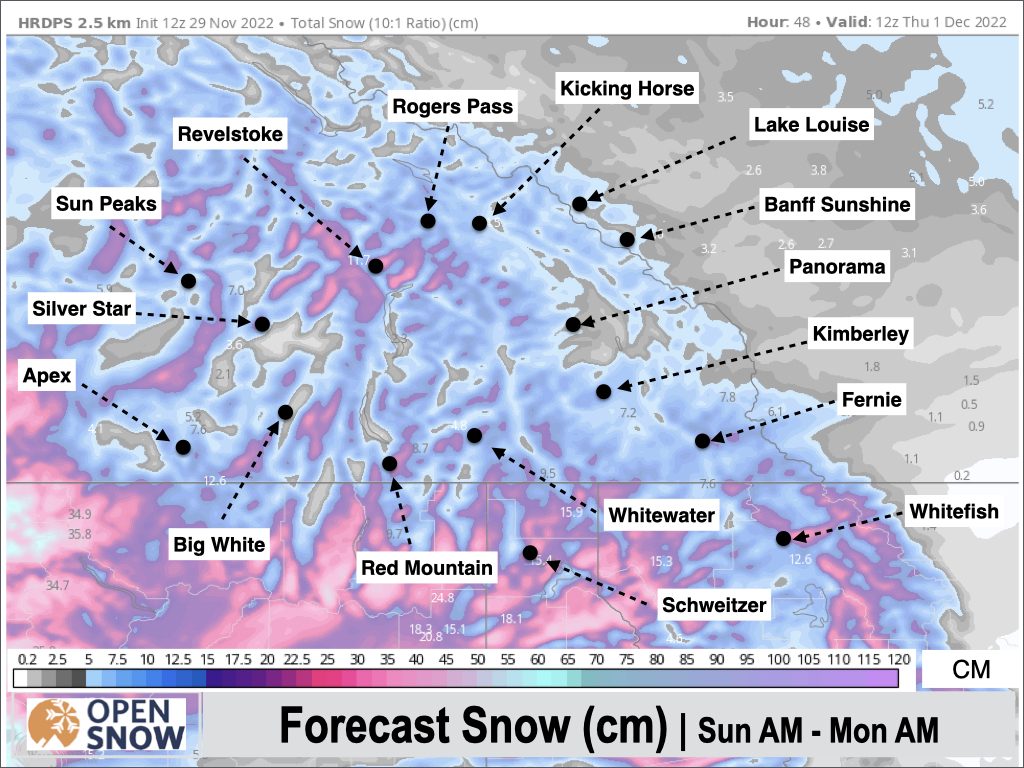 The main storm will have moved southward into the U.S. by Thursday. However, some models are indicating a secondary surge of moisture and energy to reach Southeast BC. This is a close call as some models are keeping all of the moisture south of the border, while others are producing a strong enough surge that Fernie and other southeastern areas could score some bonus powder.

At the low end, southern areas may end up with just flurries. But if the higher-end model solutions prove correct, then Red, Whitewater, Fernie, and possibly Kimberley could be looking at another 15 cm (6") of powder during the day on Thursday. Stay tuned...

We will see a break in the pattern early on Friday, then the next storm will deliver a glancing blow to Southern BC on Friday night and Saturday.

The latest model trends have taken this storm further south, and as a result, I'm only expecting light snow for areas such as the North Shore, Manning Park, Apex, Big White, Red, Whitewater, and Fernie. However, we're still far enough out that any subtle shifts northward or southward could change this outlook.

Next up, a storm is projected to arrive from the west/northwest in the Sunday night-Monday (12/5) timeframe. This doesn't look like a particularly strong storm, but it could offer a nice refresher for some areas (likely favoring the Interior) and snow levels will remain low.

A brief break is possible next Tuesday (12/6), but then more storms are possible during the second half of next week. Temperatures are expected to remain colder than average throughout the week of 12/5 to 12/11 and this should continue to result in low snow levels and good-quality snow.