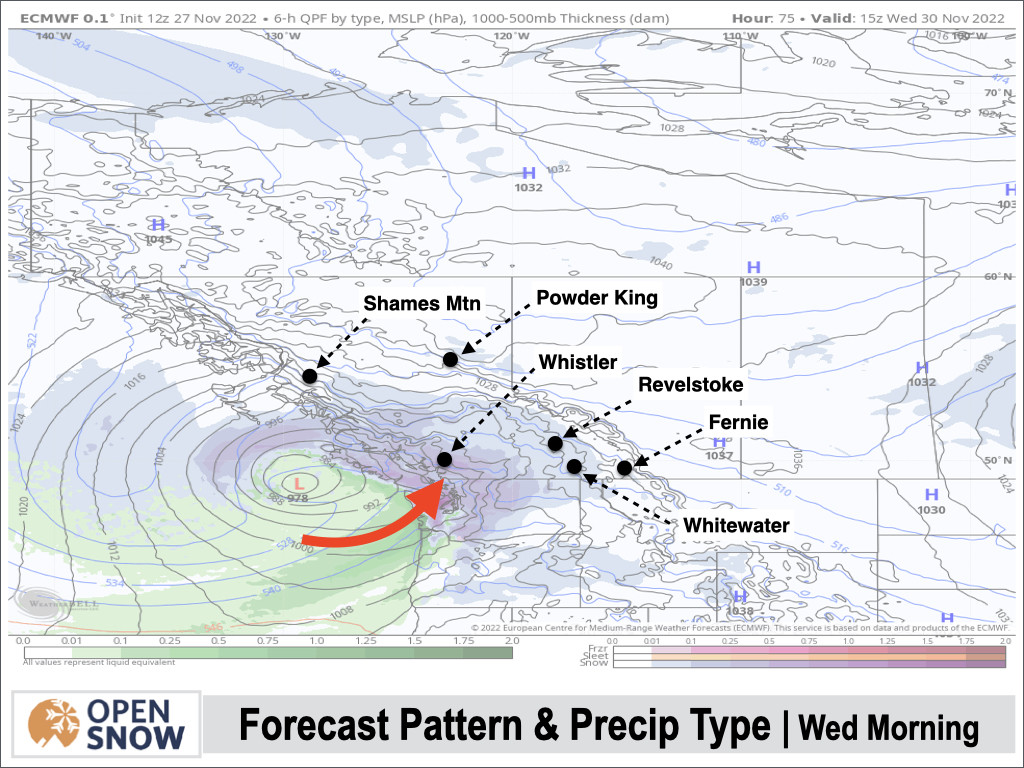 Preliminary snow totals as of Sunday AM include 24 cm at Fernie, 23 cm at Manning Park, & 20 cm at Powder King. Lingering snow showers will wind down Sun night, followed by an arctic air intrusion on Monday with cold & dry conditions. A strong storm will impact Southern BC Tue PM to Thu PM & will feature very cold air & low snow levels, with the highest totals over SW BC & the Southern Interior.

Keep in mind that not all areas are reporting snowfall yet this season. Based on the areas that are reporting, here are some preliminary snow totals from Saturday afternoon through Sunday morning:

We are on the backside of the storm on Sunday with off-and-on snow showers expected to continue through the afternoon and evening hours before tapering off to isolated flurries (mainly across the Interior) by early Monday morning. Cold air is filtering into the area, so snow levels will be low – well below ski resort base areas.

Additional snow totals from Sunday morning (counting what has fallen since AM reports) through Monday morning will generally range from a trace to 5 cm (trace-2") over the Coast Range and 2-10 cm (1-4") across the Interior with little to no snow for Northern BC.

Moisture and energy have shifted further south more quickly than expected along the Coast Range, so the North Shore Mountains are no longer expected to capitalize on backside snow showers like I was previously anticipating. 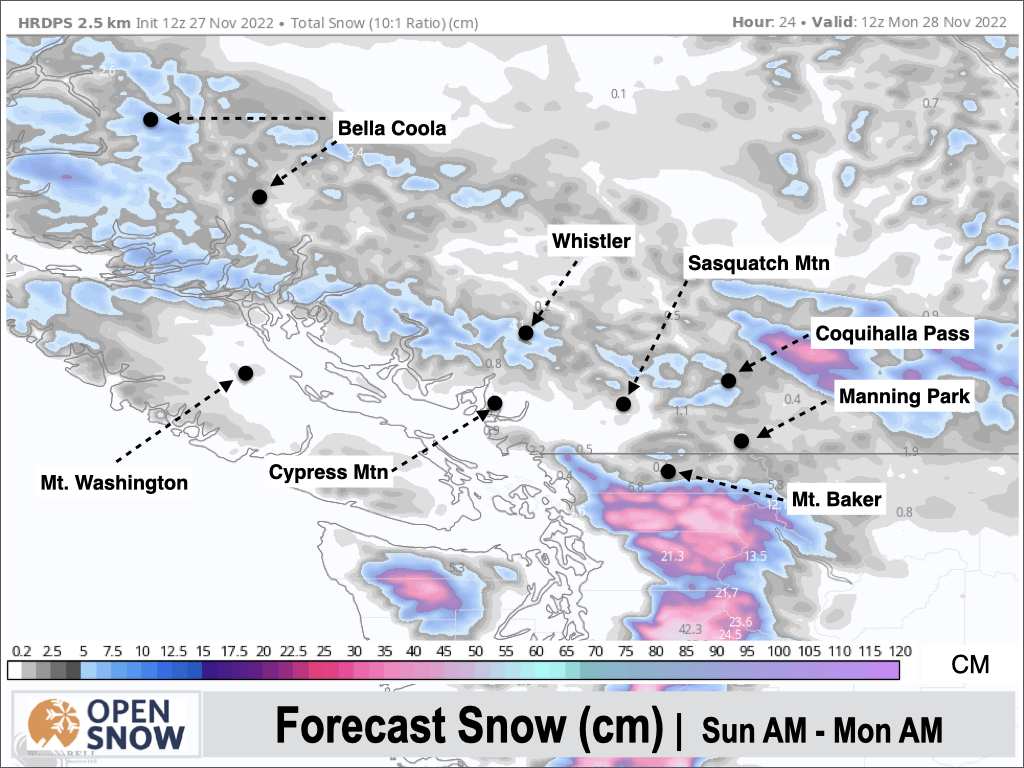 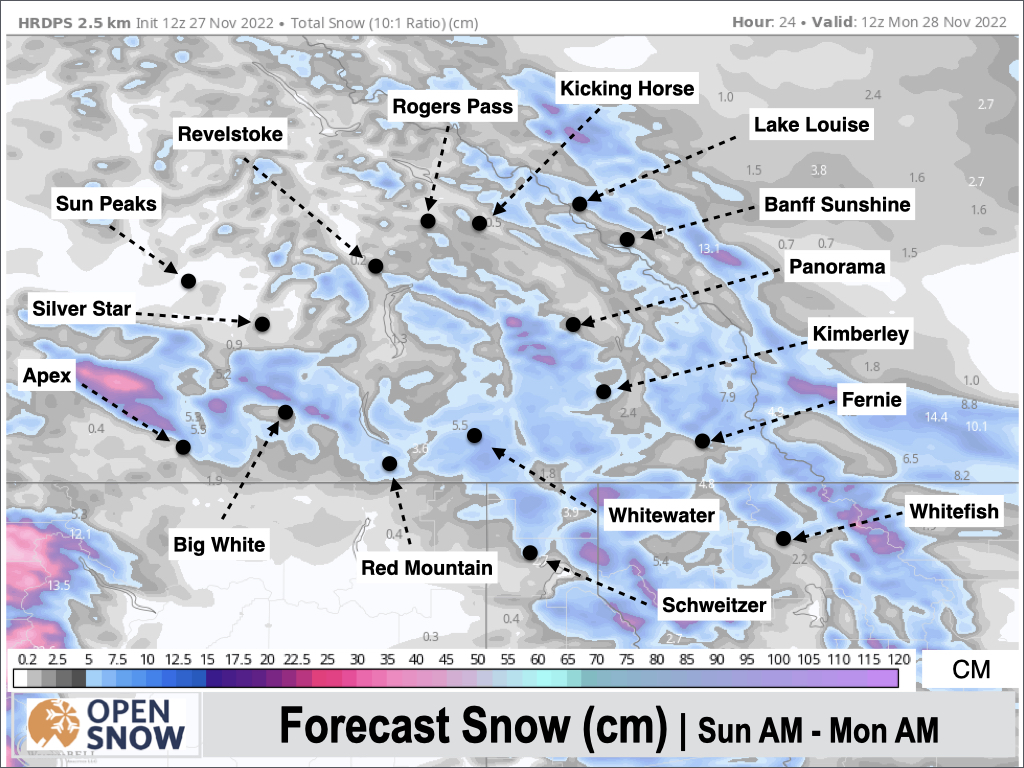 Arctic air will take hold throughout BC on Monday, resulting in frigid temperatures and generally dry conditions aside from some lingering flurries and light snow showers across the Interior.

High temperatures on Monday at ski resort mid-mountain elevations will range from -10º to -5ºC across the Coast Range and -15º to -10ºC across the Interior.

Forecast for Tuesday to Thursday:

A powerful storm will impact Southern BC during the middle of the week, and there is a lot of excitement brewing around this storm since frigid arctic air will result in snow levels dropping to sea level with significant accumulations possible around Vancouver.

For ski resorts, the cold air in place will result in high snow-liquid ratios and good-quality snow as a result. The main question will be how far north away from the U.S. border the snow from this storm makes it.

On Tuesday, light to moderate snow will spread into the Coast Range (Whistler & the North Shore) with heavy snow developing across Vancouver Island as a surface low (area of low pressure) intensifies to the west. 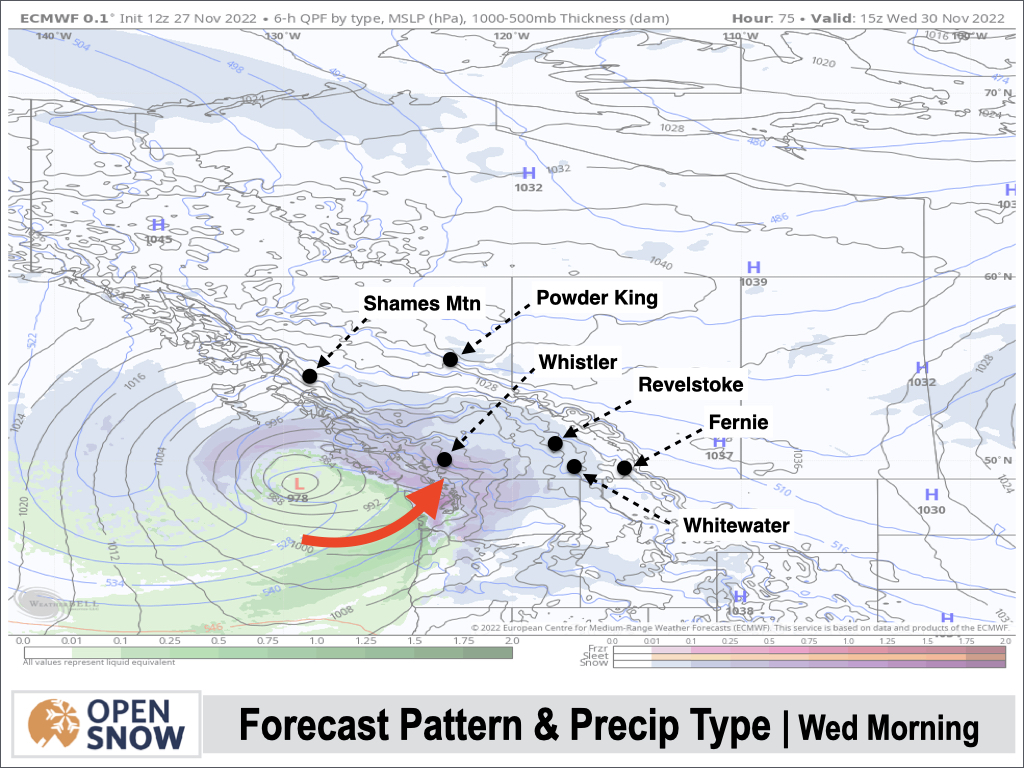 Light snow will begin across the Interior early on Wednesday morning, then will pick up as the day progresses with moderate to heavy snowfall rates expected from Wednesday afternoon through Wednesday night. Snow could potentially linger well into the day on Thursday across the Interior as well, though confidence is lower on whether or not this happens.

Strong winds can also be expected across the Interior on Wednesday and Wednesday night, with the dry/powdery nature of the snowfall resulting in blowing snow and difficult travel conditions. Snow levels will also be down to valley bottoms. 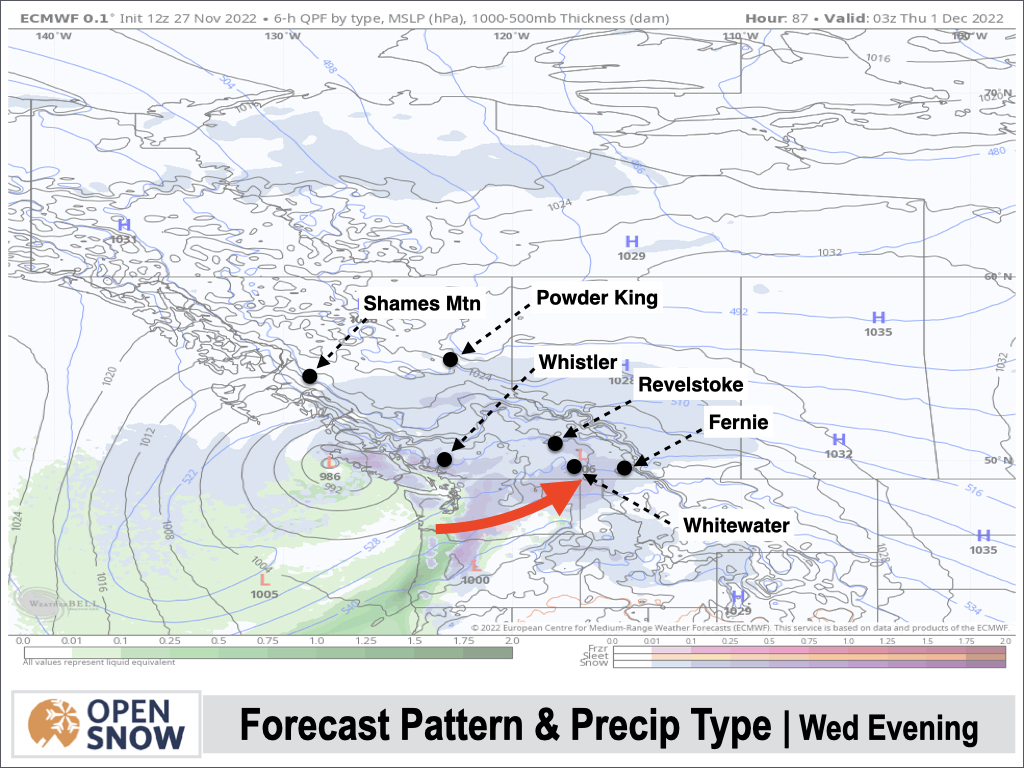 There are still some details and model differences to work out in this storm, but generally speaking, I'm expecting snow totals from Tuesday through Thursday to range from 30-60 cm (1-2 feet) across the Coast Range of Southern BC and 15-40 cm (6-16") across the Southern Interior, including Big White, Red Mtn, Whitewater, and Fernie.

The Northern Interior (Revy, Rogers Pass, Kicking Horse) will be a wild card as models are struggling to get a handle on the northern extent of the moisture. For now, I would expect anywhere from 10-30 cm (4-12") across this region.

We'll get more dialed on the snow forecast for all areas moving forward. 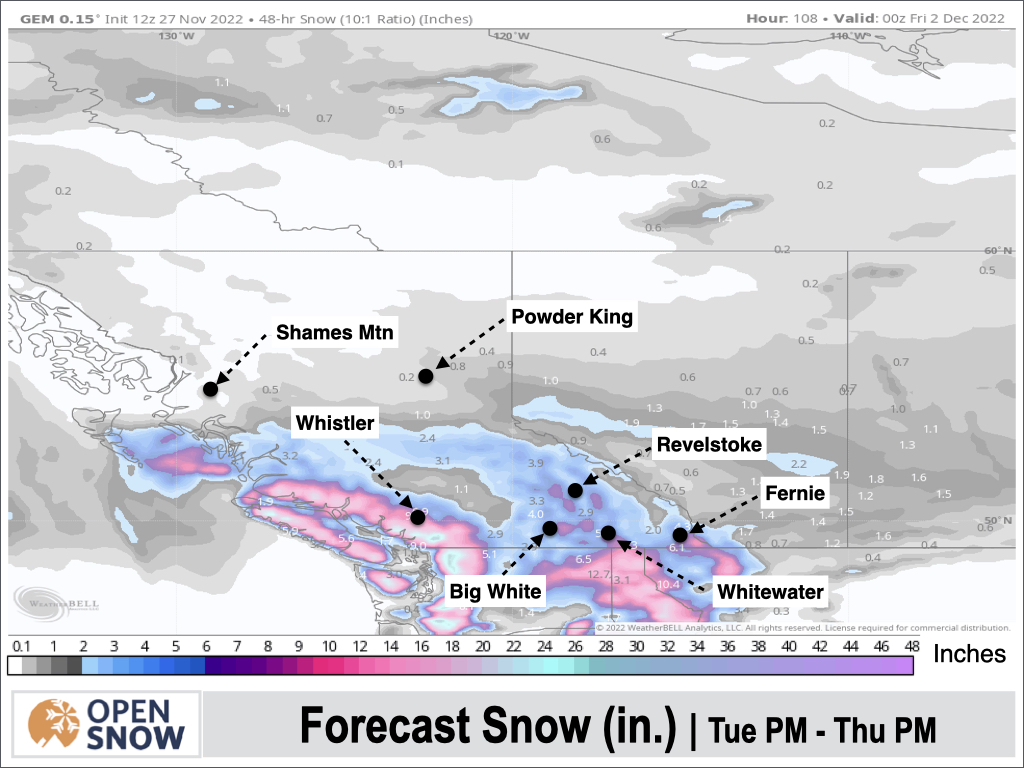 As far as skiing conditions go, I would target Thursday morning throughout Southern BC. Wednesday storm skiing could be fun, but strong winds will also result in difficult travel conditions and possible upper mountain lift closures.

We may see a relative lull in the action on Thursday night/Friday morning, then another storm is possible from later Friday through Saturday. This storm looks weaker than the last one and will favor southern areas near the U.S. border the most, but it could serve as a nice refresher.

After that, we should stay in a relatively active pattern during the week of December 4th-10th, though the pattern will favor weak to moderate storms more so than strong storms with the dominant storm track being out of the west/northwest.

Temperatures are also expected to be colder than average throughout the extended period, which is good news in terms of snow levels staying low, while snow quality should also be good.