Multiple shots of snow along with colder temps 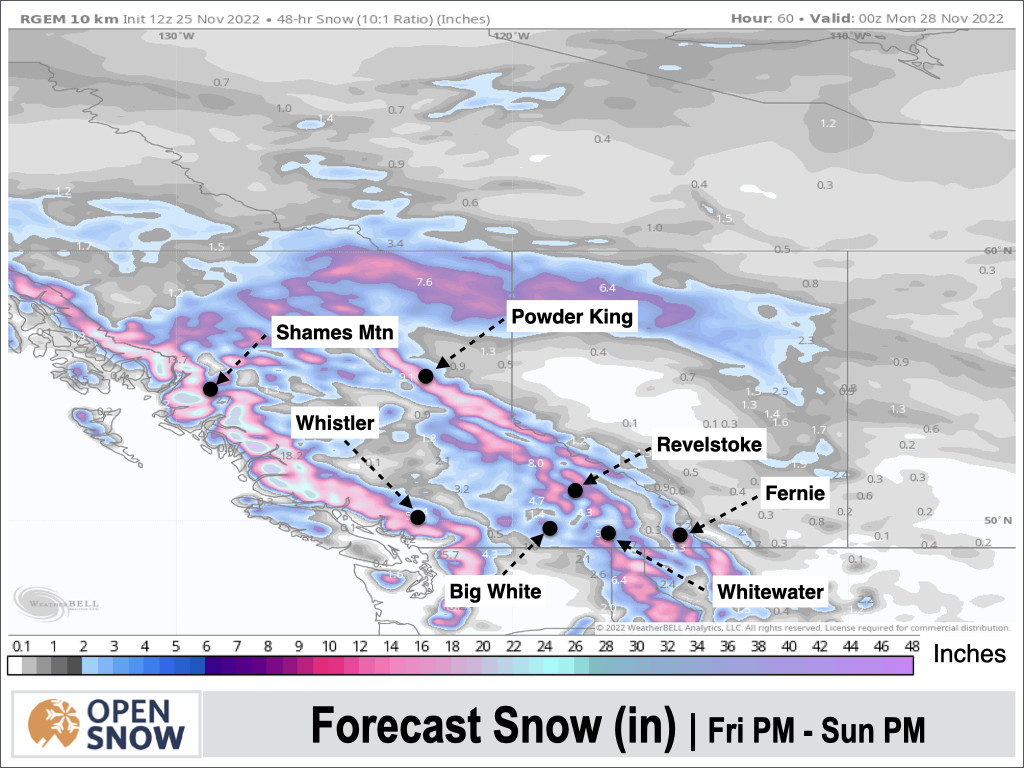 November will be ending on a snowy note across BC, which is great timing as most ski areas are opening up over the next 1-2 weeks (some are already open). A storm will bring snow to most of Southern BC on Friday with snow levels trending lower. A stronger storm will arrive Sat night-Sunday with heavier snow along with a further lowering of snow levels. Another storm is possible Wednesday.

A storm is moving into Southern BC on Friday morning and snow is falling at Whistler with 3 cm reported so far. Snow levels are starting out around 1,500 meters at Whistler (and even higher over the North Shore Mountains), but a cold front moving through will result in falling snow levels as the morning progresses.

Most of the snow will fall across the Coast Range during the morning hours on Friday before tapering off to flurries in the afternoon. Snow levels will drop to around 1,200 meters (3k feet) by the time snowfall starts to wind down, but areas that saw rain prior will only see light snow amounts once it becomes cold enough to snow.

Snow will begin across the Northern Powder Highway (Revelstoke area) and Okanagan region late Friday morning before picking up across the entire Interior on Friday afternoon when the heaviest snowfall rates are expected. Snow will taper off to flurries on Friday evening and overnight.

Snow levels will generally be low across the Interior, but the bottom of Revelstoke (below 900 meters) and the bottom of Fernie (below 1,200 meters) will see precipitation start as rain before changing over to snow toward the end as colder air arrives.

Snow Totals (Fri AM to Sat AM):

Additional snow amounts will range from 5-10 cm (2-4") at Whistler and Manning Park with only dusting level accumulations for the North Shore ski resorts as rain briefly changes to snow on the backside of the system. Heavier snowfall on the order of 10-20 cm (4-8") can be expected around Coquihalla Pass. 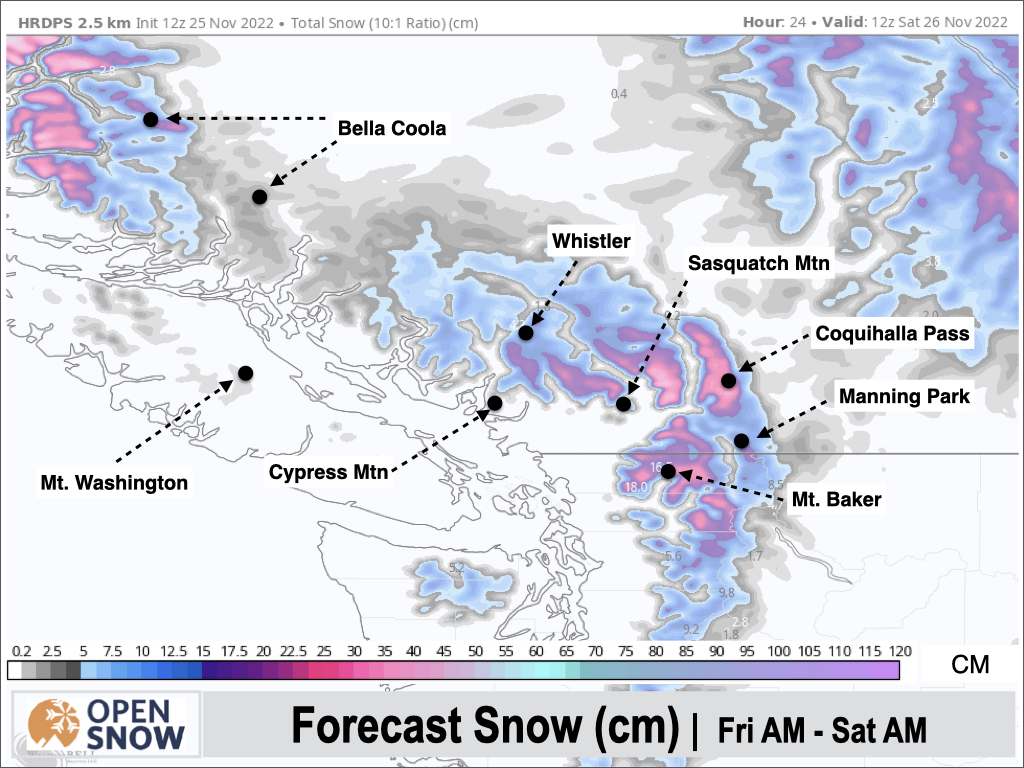 Across the Interior, Revelstoke, Rogers Pass, and Kicking Horse will be the most favored areas with 10-20 cm (4-8") of snow expected. Elsewhere, snow amounts will range from 5-15 cm (2-6") at Whitewater and Fernie, and 2-10 cm (1-4") for all of the Okanagan resorts as well as Red Mountain, Panorama, and Kimberley. Saturday morning will be a good time to catch some fresh powder turns. 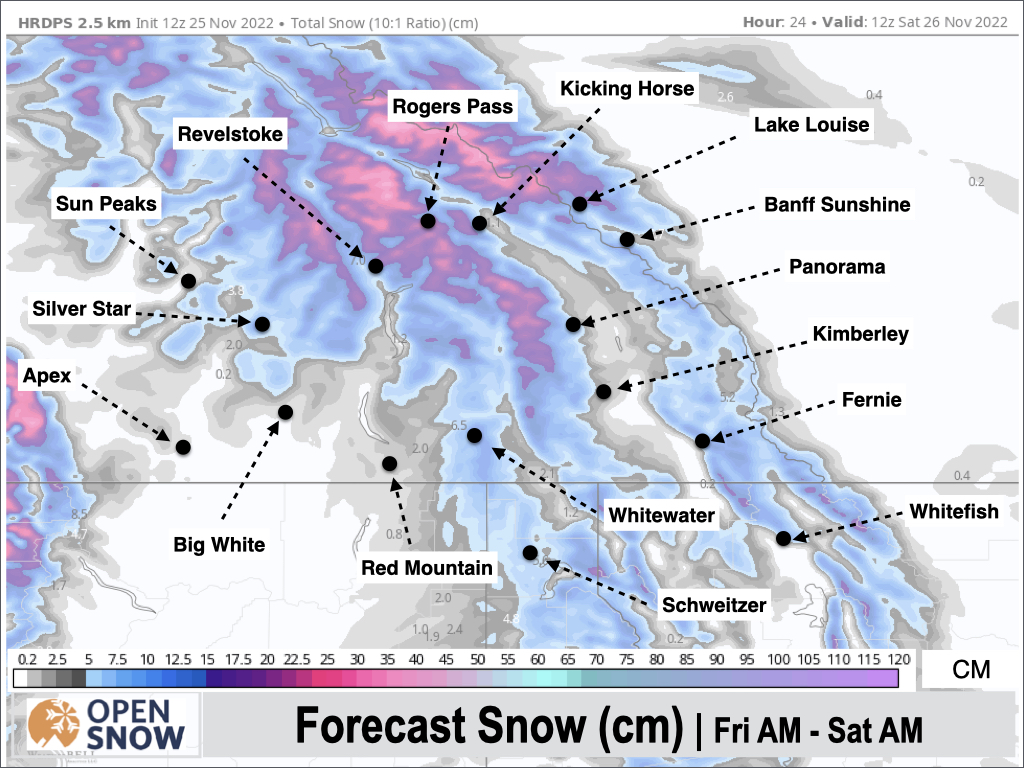 A stronger storm will impact all of BC this weekend. Colder air will also be arriving from the northwest, and this will result in lower snow levels and better snow quality compared to the last storm.

By Saturday afternoon, snow will pick up across the Coast Range (Whistler to Vancouver North Shore Mtns), then will become heavy during the overnight hours on Saturday night. 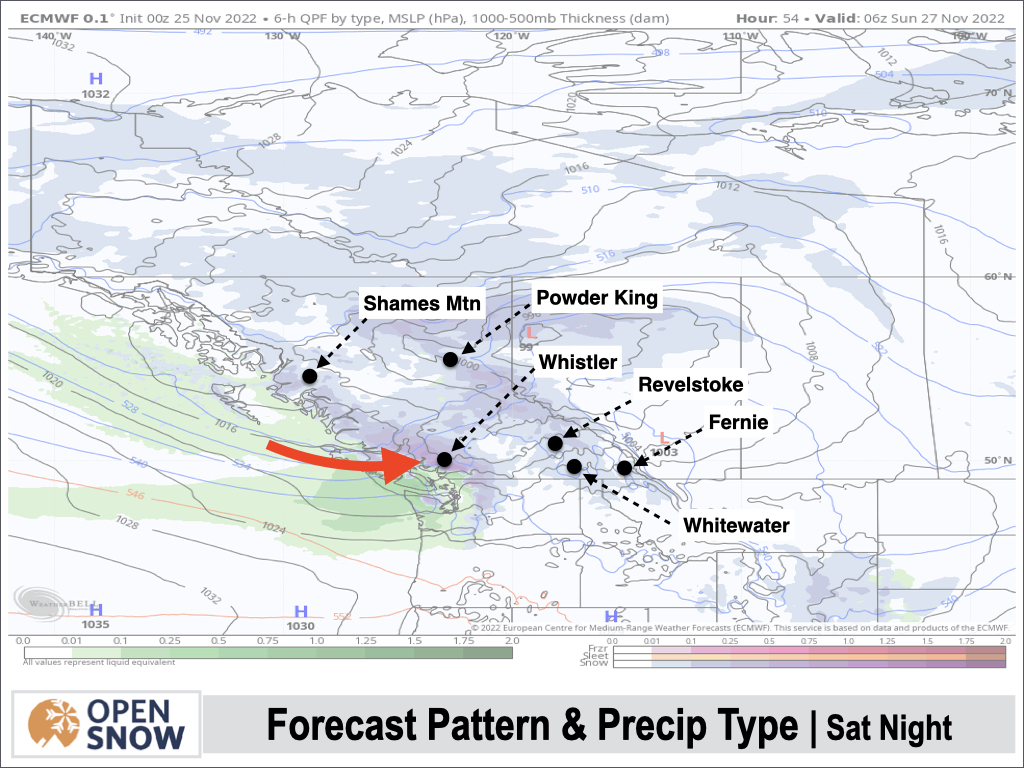 On Sunday, snow will taper off around Whistler but a backside surge of moisture from the northwest will favor the North Shore Mountains and Manning Park for additional snow showers during the day on Sunday with snow levels staying low.

Across the Interior, snow will begin during the evening then will become heavy and more widespread late in the night and through the morning hours on Sunday. On Sunday afternoon and evening, snowfall will taper off to flurries, though widespread snow could persist a bit longer around Fernie compared to other areas.

Snow levels will remain below base areas throughout this event across the Interior. 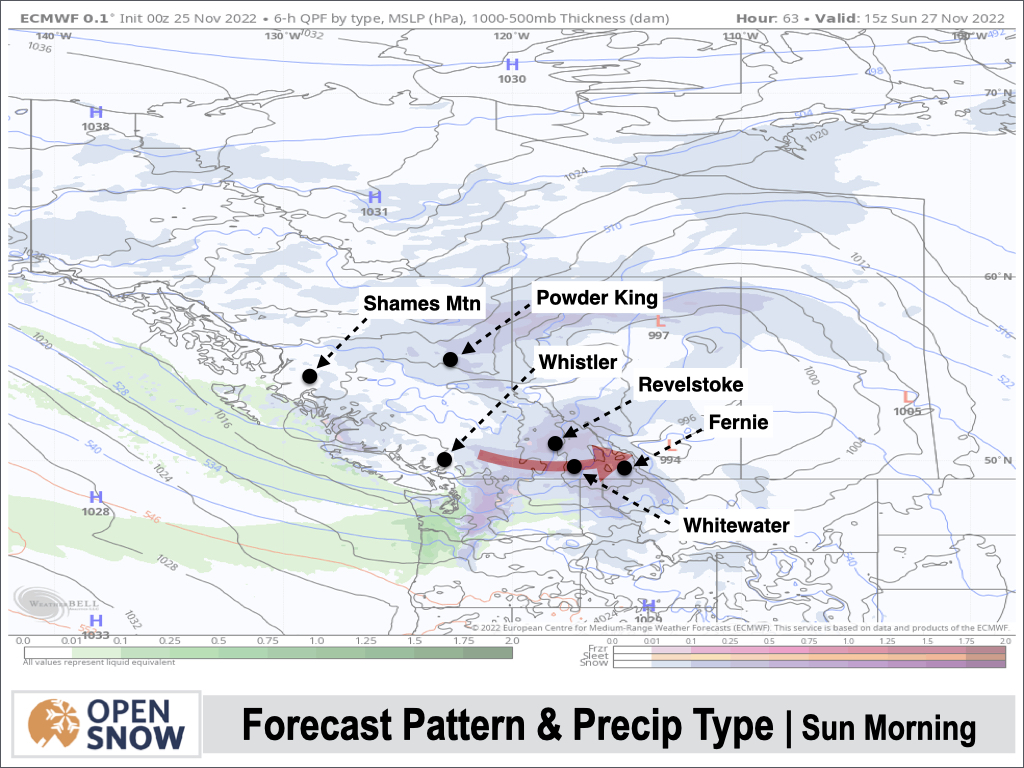 The west (and eventually northwest) flow isn't super favorable for Whistler, but strong dynamics will still support moderate/heavy snow totals on the order of 10-20 cm (4-8 inches) through first thing Sunday morning, when the best powder turns can be expected.

The North Shore Mountains (Cypress, Grouse, Seymour, Sasquatch) will see higher amounts of 15-30 cm (6-12") through Sunday evening, though lower portions of these mountains could see a brief period of rain on Saturday night. Sunday afternoon may be the best time to ski here as snow adds up on the backside of the storm.

I expect similar totals of 15-30 cm (6-12") at Manning Park with precipitation staying all-snow. Mt. Washington and the Vancouver Island Mountains will not be as favored in the west/northwest flow but should still pick up 5-15 cm (2-6"). I would target Sunday morning for the best turns, and with a colder airmass in place, the fresh snow will be lighter and more powdery compared to the last storm. 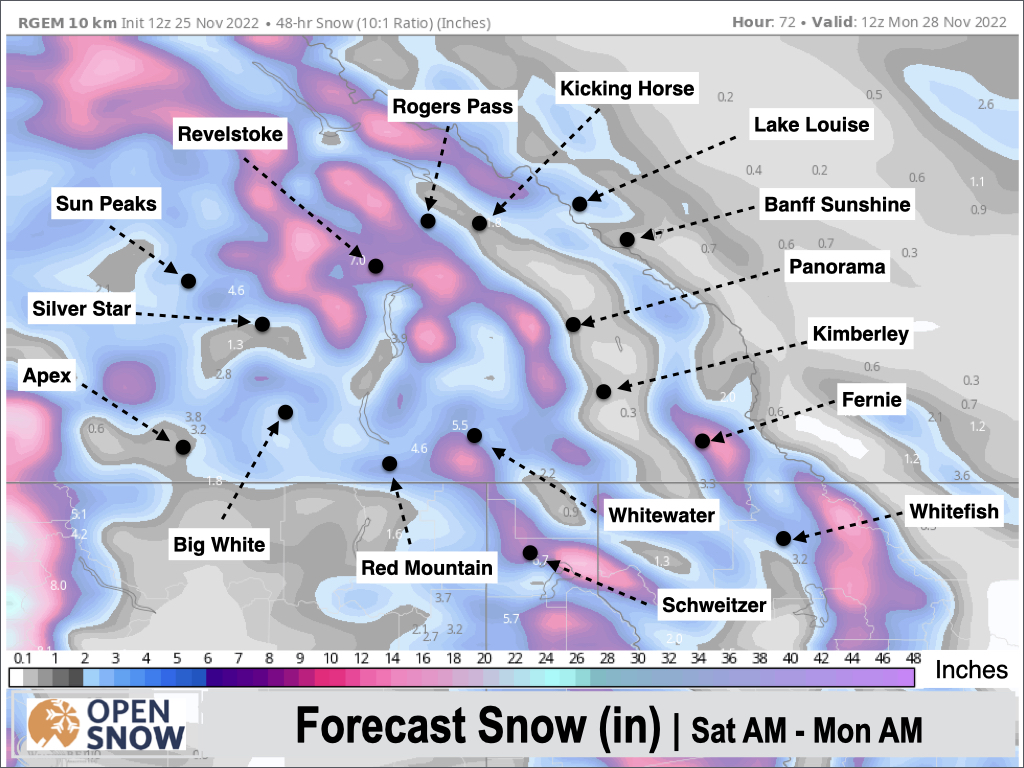 This will be a significant storm across Northern BC as well. Shames Mountain and Powder King should both pick up anywhere from 25-50 cm (10-20") from Friday night through Sunday night. Shames Mountain and the Northern Coast Range will see its heaviest snowfall from Friday night through Saturday afternoon, and the Northern Rockies/Cariboos from Saturday afternoon through Sunday morning. 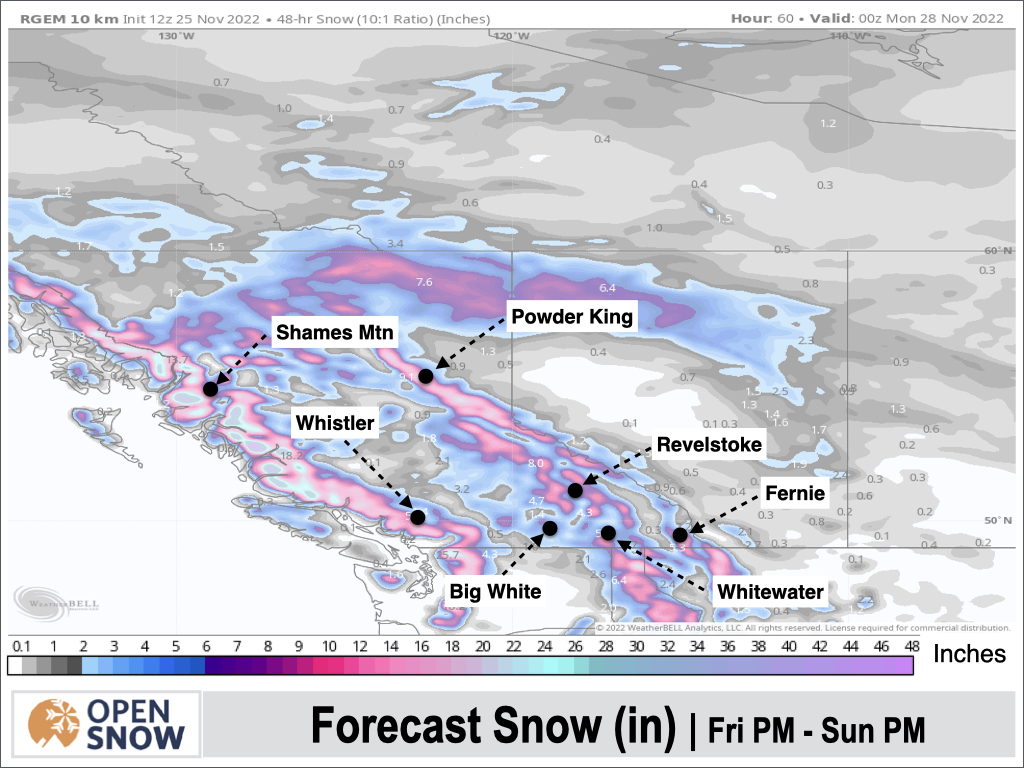 An arctic cold front will arrive from the north on Monday and will settle across Southern BC, resulting in a cold and dry day throughout the province. The Interior could see some flurries on Monday, but any accumulations will be minimal.

The next storm is possible on Tuesday night (11/29) and Wednesday (11/30). Models are in poor agreement on this storm with the European Model having the most favorable outlook with heavy snow possible across Southern BC in a southwest flow. Cold air would also result in low snow levels and good quality snow.

On the other end of the spectrum, the American GFS Model is trending much further south with this storm with very little moisture reaching Southern BC.

The Canadian Model is in the middle (and perhaps the most realistic solution now) with moisture reaching Southern BC, with potentially sneaky good snowfall for areas closest to the U.S. border (North Shore, Manning Park, Apex, Red Mtn, Whitewater, Fernie). Stay tuned...

Looking further out, another storm may arrive from the west/northwest in the Friday (12/2) to Sunday (12/4) timeframe, but this would likely be weaker compared to prior storms.

Temperatures are expected to be below average throughout the week as arctic air remains entrenched across BC.

Outlook for December 5th and Beyond:

Below-average temperatures are expected to persist heading into the first full week of December. However, long-range models are projecting a drier pattern to set up across BC with high pressure located near the Coast, which could act as a barrier for storms.

However, we'll keep an eye out for any storms that could slide in from the Northern Gulf of Alaska along the eastern periphery of the ridge, which could temporarily "shove" the ridge further west and tap into some Pacific moisture.

For what it's worth, we have seen these sorts of patterns set up in the short to medium range recently after not being picked up by models in the long-range.