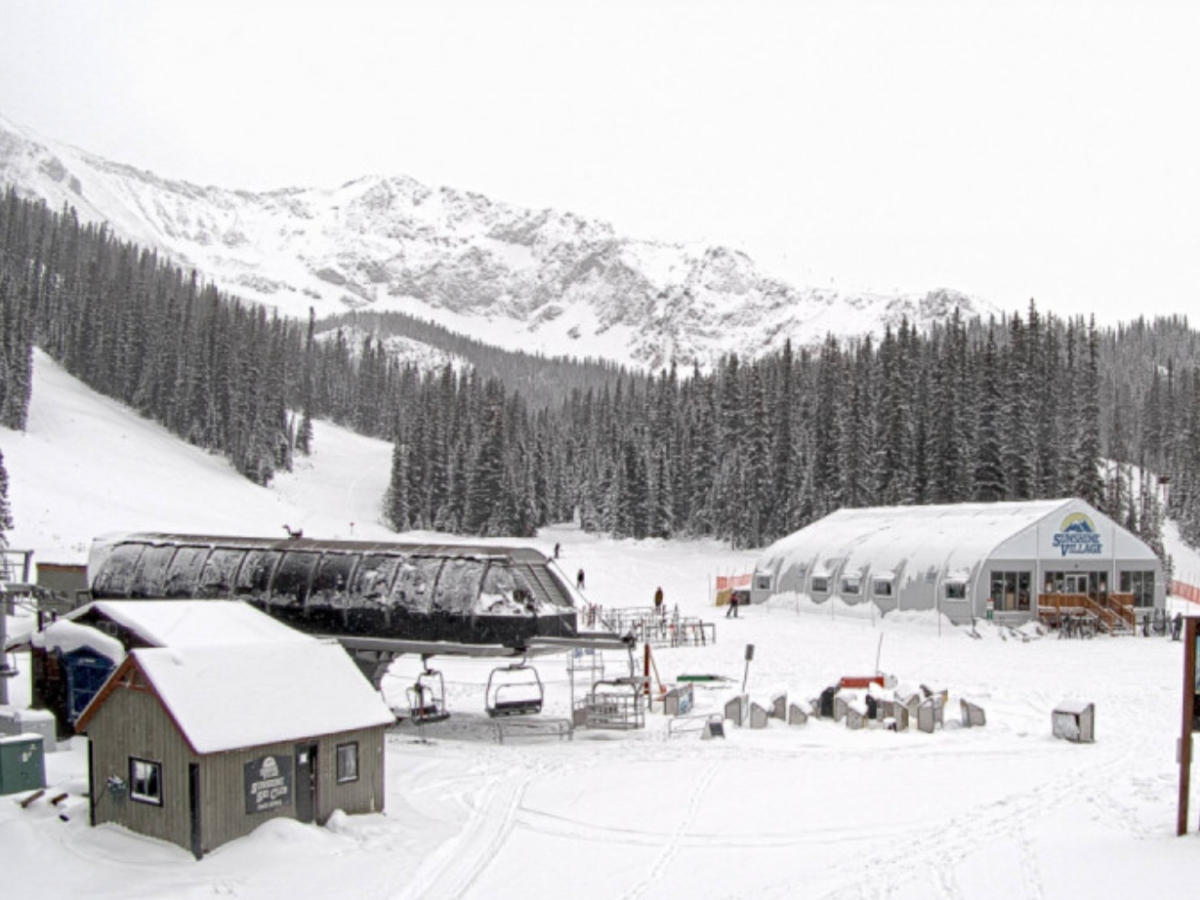 Pretty good snowfall over the last 48-hours with 24cm at Sunshine, 20cm at Castle, 18cm at Louise and Marmot, and 11cm at Nakiska. The storm will add another 5-10cm Sunday afternoon/evening at Sunshine, Norquay, Nakiska, and Castle, before ending overnight. Arctic high pressure then moves in for a cold week. The far South Rockies (Castle) could see another decent storm midweek but that's about it.

Below: Looking up at Delerium Dive from the Goats Eye lift at Sunshine Village. With 24cm over the last 2 days, it's slowly filling in. 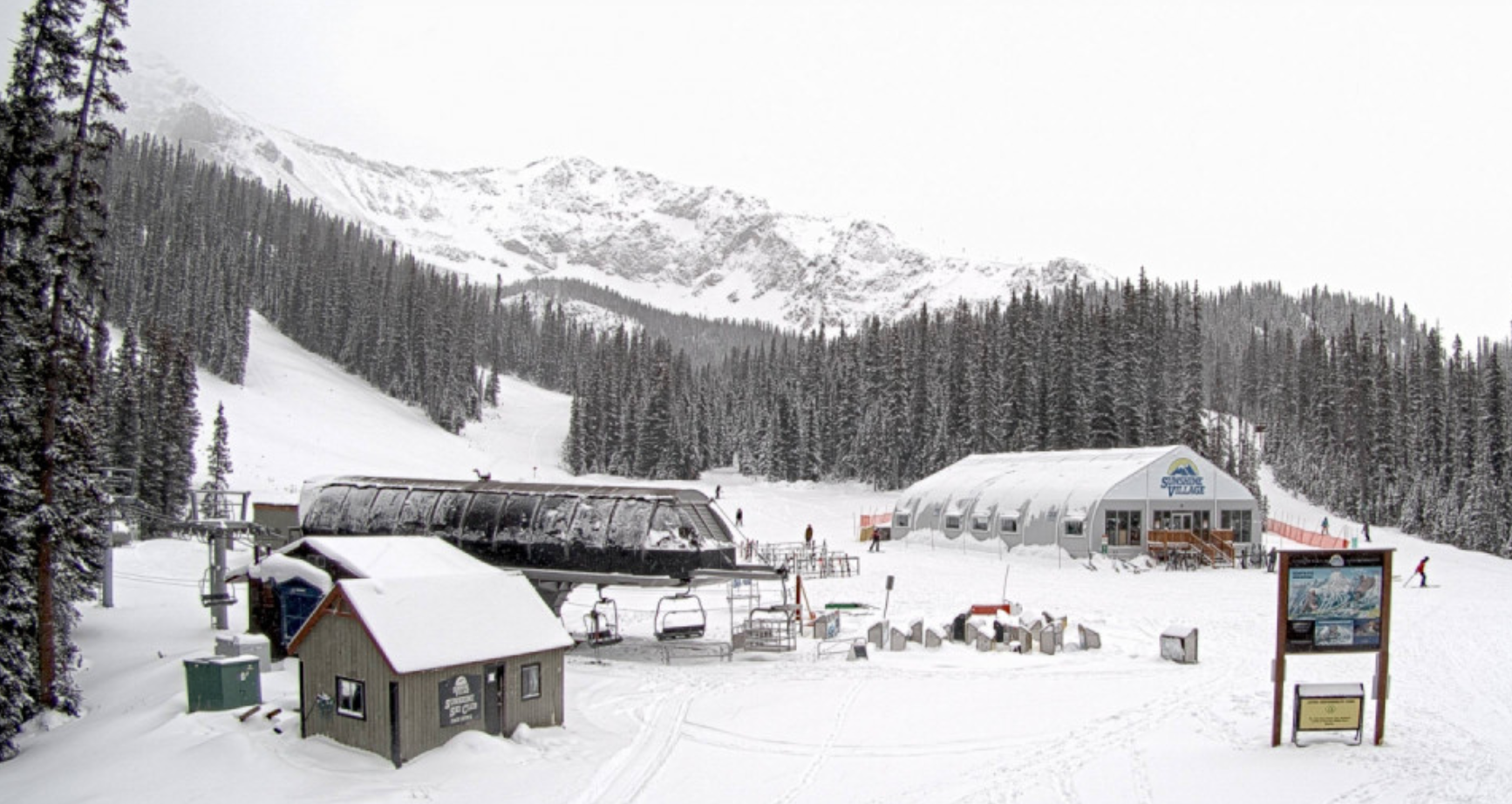 Sunday: Snowfall has ended at Marmot Basin at noon and clearing will be seen at Lake Louise by midafternoon. For the rest of the day on Sunday, the cold front will spread south into Kananaskis and the South Rockies with another 5 – 10cm likely in those areas. Cooler behind the front.  Temps at 2200m dropping to around -10C. Gusty W/NW winds to 20- 40kph.

Monday: An arctic high-pressure ridge pushes south out of the Yukon and NWT on Monday drying the Rockies out and ushering in frigid temps. Morning low of around -20C, with an afternoon high of -19C (2200m). Light N/NE winds.

Tuesday: Cold with a mix of sun and clouds. Some light flurries are possible in the afternoon. Dangerously cold wind chills. Actual surface temps at 2200m with a morning low of -25C, with an afternoon high of -19C. Light E/NE winds.

Wednesday: High pressure remains to the east of the Rockies buffering the effects of an incoming low-pressure system being transported on an SW flow. Wednesday looks to be a mainly cloudy and cold day across the Rockies with afternoon flurries developing, and possibly some trace amounts. Lows around -20C and highs around -15C at 2200m.

Thursday: As Pacific moisture from the incoming low-pressure system hits the frigid crest of the Rockies Wednesday night, upslope cold air at the Divide will create light to moderate snowfall. At this point, weather models are favoring the South Rockies (Castle, P-Keg) for the highest snow potential in the 10 -15cm range. From Kananaskis to the north, flurries are likely with just light accumulations of 3 – 6cm, with potentially up to 10cm for areas along the Divide (upper mountain at Sunshine). Temps at 2200m with a morning low of -19C, with an afternoon high of -14C. Light E/NE winds.

Below:  European Model animation for the period Sunday afternoon 11/27 – Sunday 12/4 shows the outgoing storm system being overtaken by the arctic high-pressure express. On Wednesday afternoon, a SW flow will bring remnants of a BC low-pressure system into mainly the South Rockies.

An arctic high-pressure ridge remains entrenched over the prairies east of the Canadian Rockies with a few blips of moisture riding high over the ridge creating just enough instability for snow flurries to develop on Friday into Saturday. Another shot of arctic air is also expected on Friday. We could see another system ride over the high pressure for the Saturday into Sunday (12/3 - 12/4) time frame that could bring light accumulations for areas around Banff south to Castle Mountain. Continued cold with well below average temperatures sticking around through next weekend.

Below: Canadian model animation for surface temps across BC and Alberta from Sunday 11/27 through Sunday 12/4 indicates a very cold week ahead. Those purple shades indicate the coldest surface air.

Thanks for tuning in, cover any exposed skin and stay warm out there! Next update will be on Tuesday 11/27.

Castle Mountain   RE-OPENS for the season on 12/2, then daily Op’s