Colorado scored deep powder on Thursday with some areas up to 16 inches reported by late Thursday! The next 5 days will feature bouncing snow levels for the Pacific Northwest, significant upper elevation snow (Rain/snow at the bases) with timing the key to any chases. The northern Rockies stay unsettled with steady light to moderate events adding up to double digits through the week

Thursday kicked in with 3-7 inches of new snow at 5 AM for many ski areas in Colorado (My forecast was 3-6 with Vail and Breck being orographically favored).  Both Vail and Breck kicked into action after the 5 AM report with an additional 4-8 inches during the day.  Breckenridge wins the battle with 16 inches reported by the end of Thursday.  Vail had nearly a foot of good quality powder. For those lucky ones that either paid attention to the radar, webcams or just chased on the 3-7 inch morning report you scored.

Below: Breckenridge Cam as of Noon Thursday (Snow since 5 AM). 16-inch storm total.

The forecast for chasing powder in the next 5-7 days is going to be tricky if you're looking for double-digit overnight dumps. The Pacific Northwest will be very wet with snow levels flip-flopping through the next several days from just above the bases creeping up towards mid-elevations. The trend is to cool next week in the extended forecast. Upper elevations of many Northwest ski areas including Whistler may see significant snowfall through Sunday albeit dense.  If you like deep cream chase it! Washington and western BC will be favored. The interior of BC grabs steady periods of light or moderate snow next week with slightly cooler temps (consider an inland chase).

The Rockies trickle light snow Friday/Saturday (Wasatch, Tetons, Northern Colorado) with an increase by Sunday night. Steady light to moderate snow will be falling favoring the Tetons pushing somewhat into southern Montana (Big Sky). The peak periods will be Sunday night into Monday and again for Tuesday PM to Wednesday in the extended.  The Wasatch may end up with a moderate storm for Monday morning. While the Tetons won't see any single deep event the sum totals are likely to exceed 9-14 inches through Wednesday (Steady periods of light or moderate snow). Colorado will benefit Sunday night and again for Wednesday with the northern mountains favored for some light or moderate snow.

Below: Total liquid moisture for the west through Wednesday morning.  Significant amounts noted in the PNW followed by central and northern Idaho and Wyoming 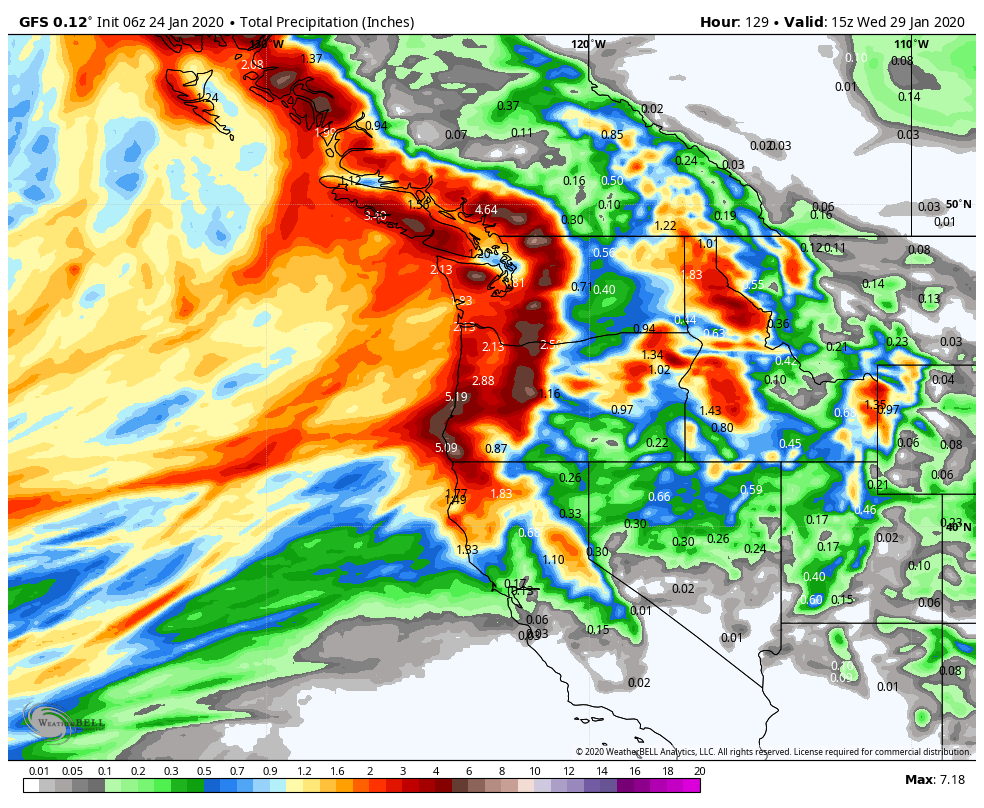 Cooling temps in the PNW offer a glimmer of hope for a decent powder day for Monday or Tuesday (3-3500 snow levels).  The Rockies continue to grab the teasing leftovers Wednesday with another shot of moderate snow for the Wasatch. Snow continues in Wyoming and much of central Idaho midweek albeit no single deep event is likely. The sum totals continue to build especially in Wyoming and perhaps some isolated areas of western Idaho.

Below: January 30th, Thursday warming for the PNW with snow levels rising above 5-6K. The interior of BC and even northern Idaho is much colder. 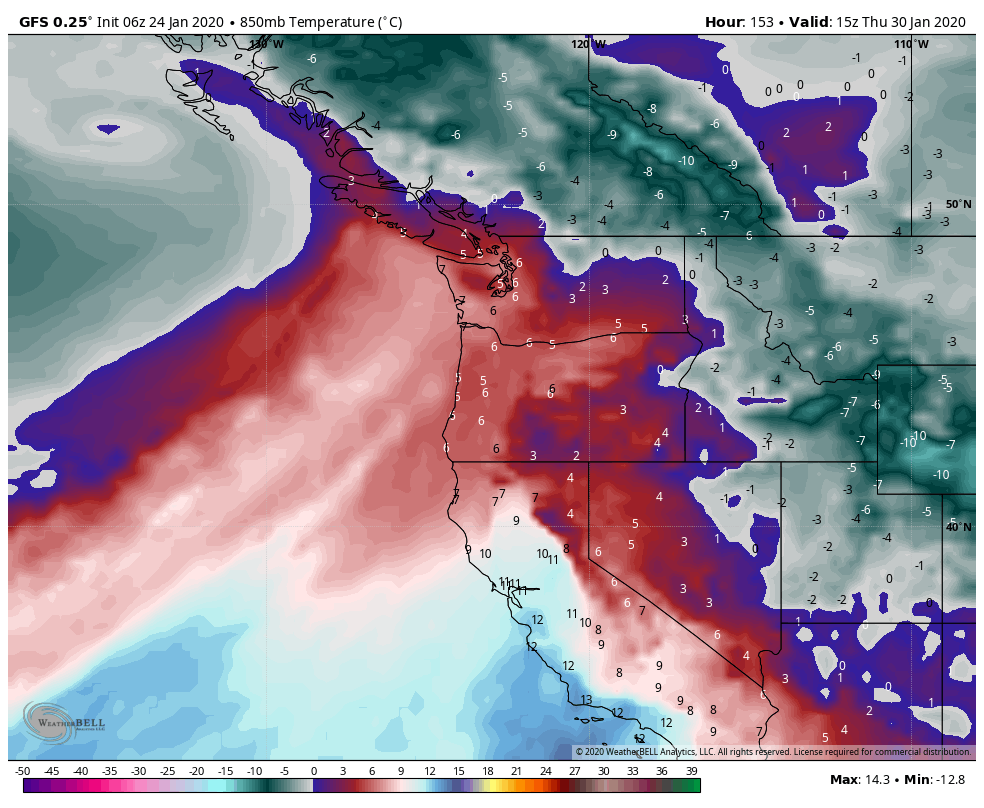 Looking to the 7-10 day period much colder air will finally blast into the Pacific Northwest by late Saturday or Sunday next week.  It's likely that the Cascades and western BC score a deep powder day.  The confidence this far out is limited but my hunch is for a welcome change to a colder pattern that will eventually impact much of the west.

Below: Significant cooling for the PNW by late next weekend. Moisture may accompany this front! 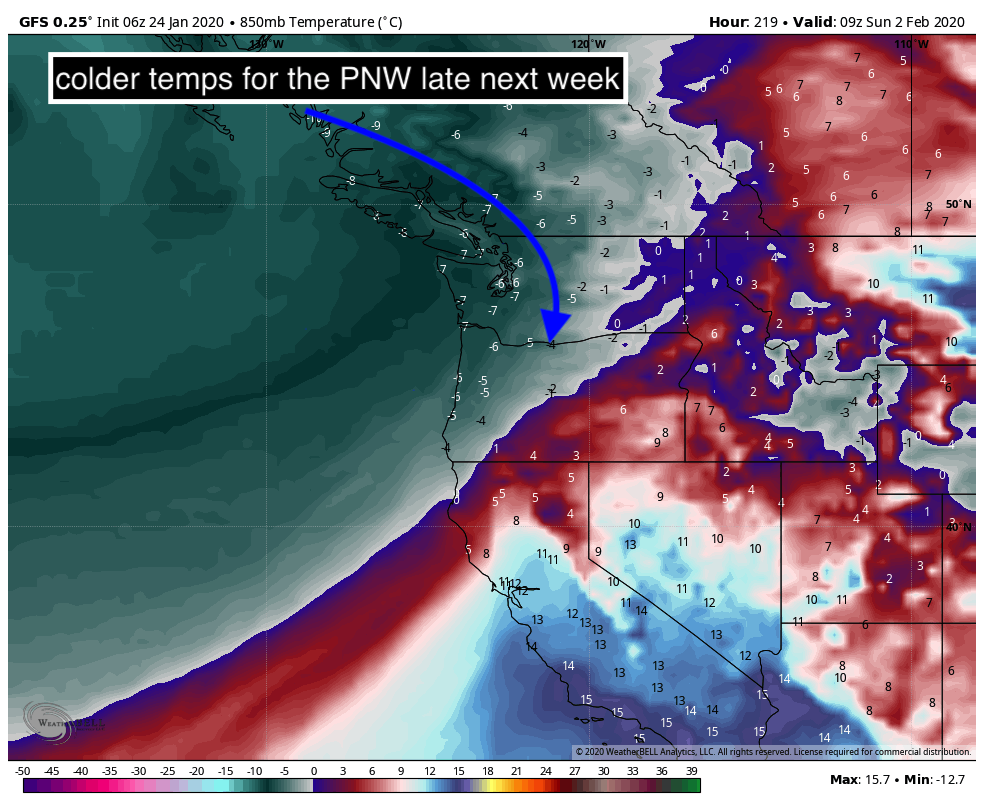 In looking out even further, it's possible that the cold air moving into the PNW late next weekend kicks off a decent low-density dump favoring the PNW and eventually migrating over the northern Rockies towards the following week.

Enjoy the powder everyone!

OpenSnow 2019-2020 Audience Survey
WATCH: Steeped In Tradition - Alta Ski Patrol
WATCH: King of Spring Reads Mean Tweets - The Snow Report Show with Halley O'Brien
Welcome to the new version of OpenSnow. Please give us feedback by emailing us at [email protected].
We use cookies to better understand website behavior and share relevant information. Learn more in our Privacy Policy.