By Powderchaser Steve, Forecaster
Posted 1 month ago
December 4, 2022 9:14am MST

Chase from the Sierra to the northern Rockies 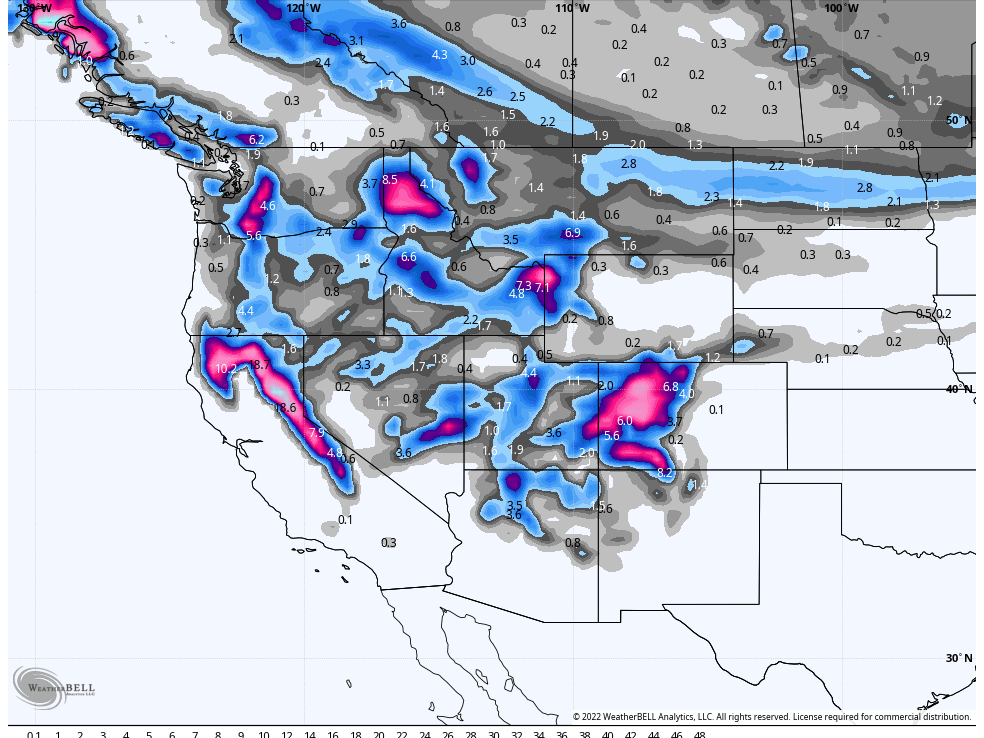 Tricky forecast with temps falling in the Sierra with snow increasing. Rising temps In the Rockies and a stalled frontal boundary (Cold front) will bring 4-11 inches to many areas of the north followed by decent snow to the southern Rockies by midweek. Temps will be cooling. Extended is deep for the PNW.

The past 7 days have been one of my top chases this early in the season. Targhee-Snowbird-Crystal-Crystal-Jackson (Over 50 inches of powder). My big miss was the 12-20 inch dump in the Tetons on Friday where roads closed from east to west preventing access from the I-15 side of Idaho. I should have hit the Wasatch on Friday. Some areas of the western panhandle of the Idaho-Montana border scored 30-50 inches in the past 4 days (Ski Lookout and Lost Trail). It's been a very impressive week. The grand finale for me was the opening of the tram at Jackson Hole on Saturday with bottomless powder from top to bottom. 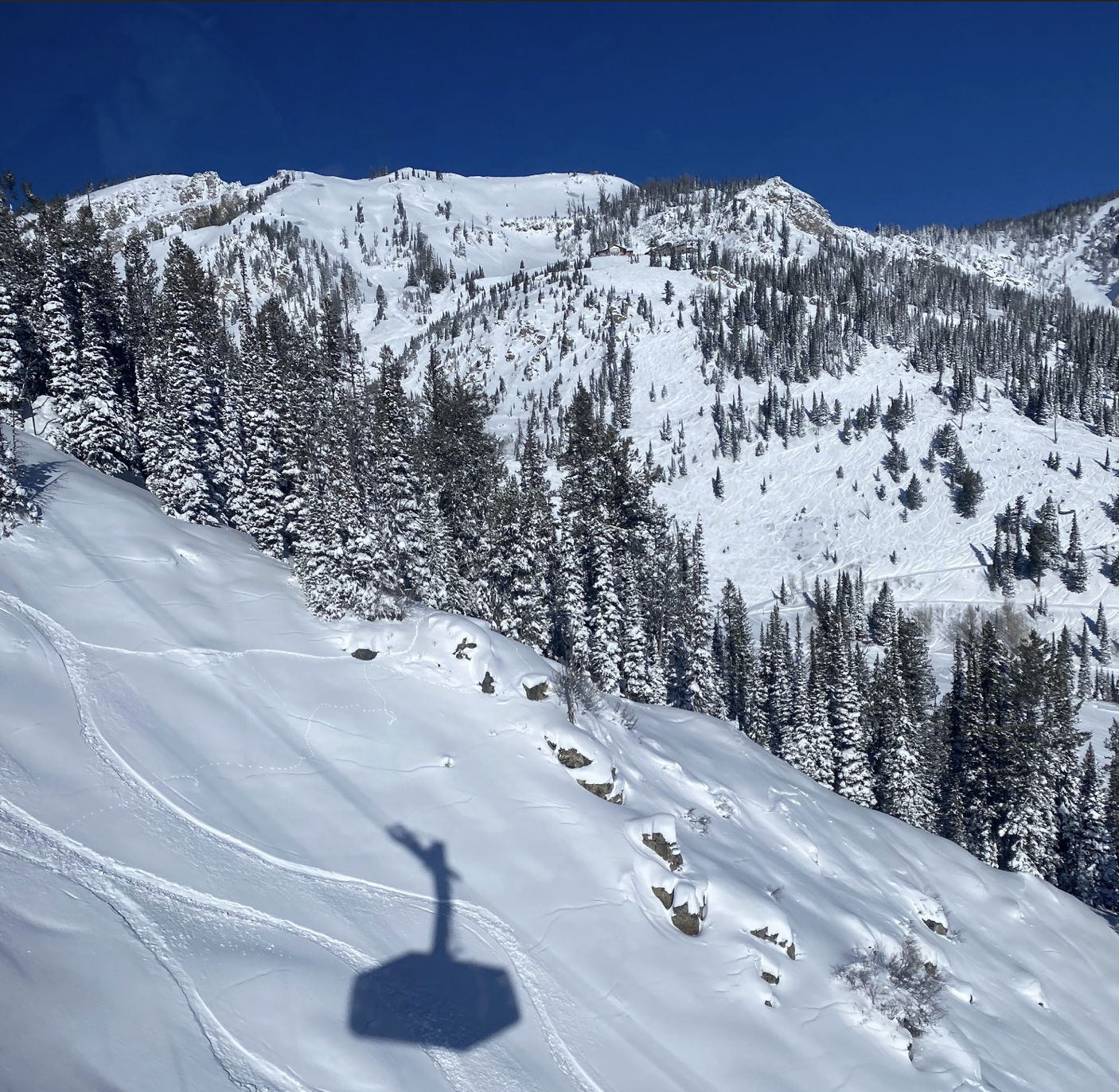 The chase for powder for Sunday should focus on the Sierra. Warm temps and strong winds Saturday created multiple lift closures and wet snow for many resorts. Rain/mixed with snow was noted in the Tahoe Basin Saturday. Conditions improve for Sunday and Monday.

Some storm totals as of Sunday:

I mentioned in my quick update Saturday to chase from south to north as most of the moisture for the southern Sierra filled in well before moving north. Temps were on the warm side thus far so quality will be surfy. Winds are still gusting at Mammoth into the '70s at the summit.

The short-term high-resolution models show an additional 8-14 inches are possible focussing on the ski areas in the northern Sierra Range (Lake Tahoe region). Colder temps will also drive higher totals at lake level (Base areas) and better quality for turns on Sunday and Monday. Monday could be a great day to score new openings, especially at the summits. Storm totals will be healthy along the Sierra Crest.

Below: Most of the snow from the southern Sierra has ended with the focus of banded precipitation that is likely favoring resorts on the northern end of the lake (Homewood, Palisades, SugarBowl). Expect another 8-10 inches for the Sierra Crest on Sunday with some light snow continuing into Monday. Conditions and quality will improve with cooler temps.

For the Rockies, it's a stubborn forecast with no single deep overnight event. However, my eyes are on the Tetons, Wasatch, and a wide area of Colorado for the next few days. For Sunday, snow will increase in northern Montana (Whitefish, or areas east to Teton Pass MT). The Tetons grab 2-4 inches Sunday and another 4-7 inches PM into Monday AM. It's possible that 6-11 inches await those areas favored by SW or westerly winds (JHMR). Temps are warm initially keeping new snow at the base to a minimum until Sunday night. The best odds of 6 or more inches will be from mid-mountain to the summit on Monday morning and the peaks could end up with more (*Some of that snow will fall while the lifts are open Sunday). Bottom Line Tetons: Decent moderate-range storm for the Tetons favoring JHMR and Teton Pass. Comes in warm and finishes cool (Dense to mid-density surf). Much less snow will be noted at the bases!

The Wasatch Range sees a stalled front Sunday afternoon near the Idaho border. The Logan area mountains (Beaver) might outperform for Monday morning (Snow beginning earlier). That front will slowly drag south to I-80 Sunday night and should kick off some light to moderate steady snow late Sunday and early Monday. Temps are warm initially before a weak cold front improves quality on Monday (Snowing during the day). Models are not in agreement on amounts. The best guess at this point is 2-5 inches for the Park City mountains (Perhaps a bit higher for the Logan area with snow beginning Sunday), and 3-6 inches for the Cottonwoods by Monday morning. The frontal boundary is likely to stall near or south of I-80 keeping moderate convective bands falling. Expect 5-9 inches for the Cottonwoods by mid-Monday with an outside chance of higher amounts (9-13). Park City might also outperform at the summits depending on where that frontal boundary stalls. I don't have high confidence in this forecast.

Bottom Line Utah: Hard to pinpoint who sees the best snow with this slow-moving system. Not overly bullish on a deep double-digit dump with models showing a range from 6-15 inches in the Cottonwoods (Consensus is not great on the models due to the narrow band of snow that falls with the frontal boundary). The most likely scenario is 5-10 by Monday mid-morning with light snow continuing. Last-minute chase decisions.

Chases to Colorado are likely for Tuesday/Wednesday. Snow will be falling in the northern mountains as early as Sunday night and Monday. Confidence is pretty high that chasing in Colorado is best for the northern mountains for Monday (North of I-70- Rabbit Ears, Steamboat), Central or northern mountains Tuesday PM (I-70 western corridor, Aspen, Steamboat) or Wednesday (Might be the deeper day). On Wednesday PM and into Thursday it's possible we see some decent totals for the southern mountains (Wolf Creek, Purgatory). This is a very slow-moving front. It's rare to be able to grab chases in 1 State for 3 days. Consider starting north of I-70 (Steamboat would be my pick) Monday or Tuesday, and chasing south to I-70 or slightly south for late Tuesday or Wednesday (Western Eagle, Summit County, Pitkin). Aspen might be a good choice. That front drags over the southern mountains for Wednesday/Thursday. Totals in Colorado look deep at this point with some spots in the 9-15 inch range. Eastern areas on I-70 will see less. Bottom Line: Rare chance to chase for 3 days in 1 State. Start north and head south by mid-next week. Amounts could be decent, but with such narrow boundaries of moisture (Exact location of the Jet) expect some upside and downside surprises. There may be continuous bands of light or moderate snow during the Monday-Thursday period (Northern mountains including I-70) with conditions improving every day.

Below: High pressure moves into the Rockies for Thursday, December 8th for the Rockies where an approaching storm moves into the PNW and Canada. This could kick off decent amounts of snow for the Cascades including Northern Idaho. 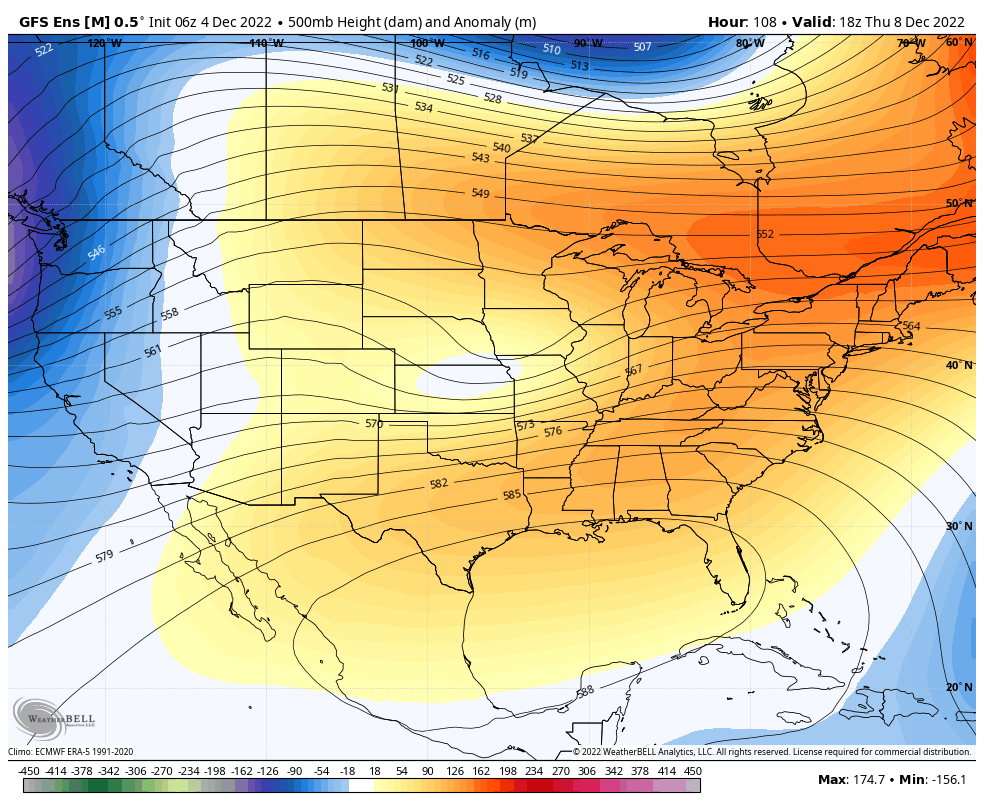 Below: Low pressure is noted in the PNW and much of Western Canada next weekend, December 10th with leftovers aimed at the northern Rockies. (Low to moderate confidence this far out). 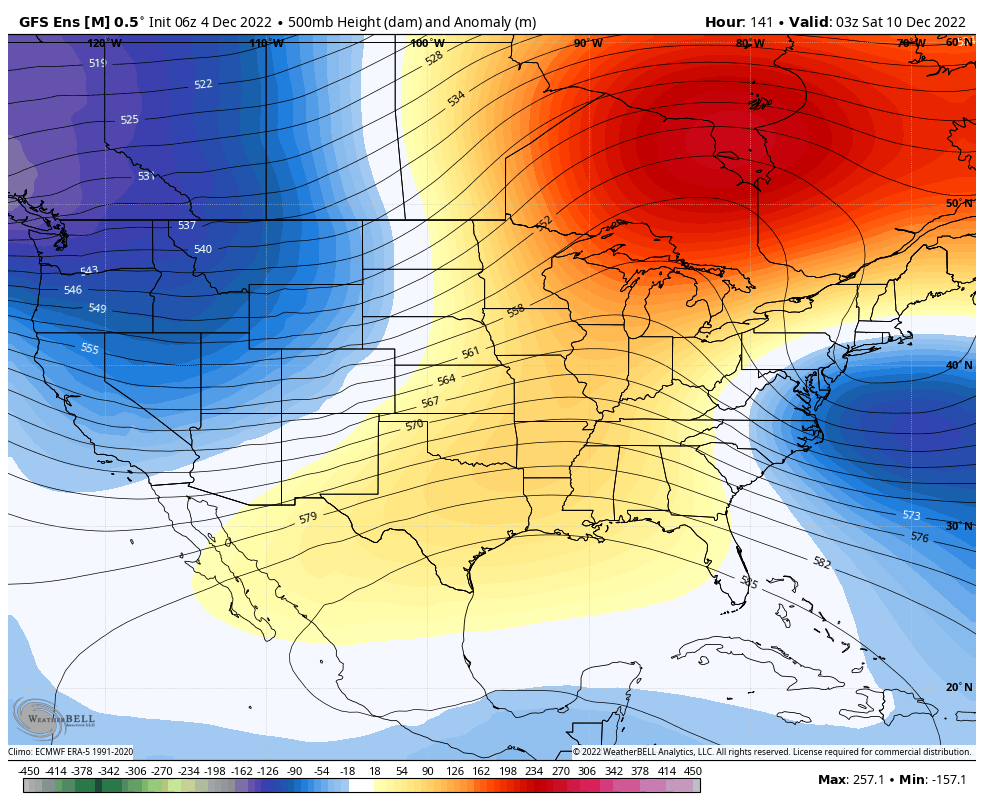 Be safe on the chase!  See you in the first chair!