By Powderchaser Steve, Forecaster
Posted 1 month ago
December 3, 2022 5:34am MST

Chase Updated- Higher snow levels for the Sierra and an increase in totals. 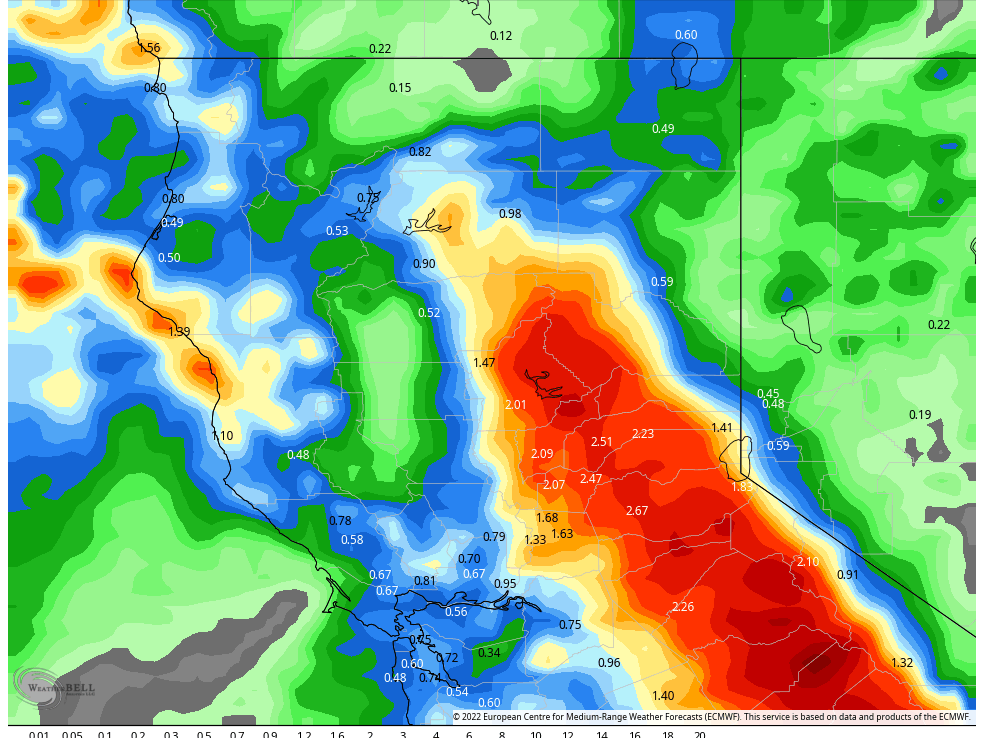 Sierra snow totals updated to 2-4 feet and temps may be a red flag for chasing in certain areas. Deep storm with some caution on chases for the Sierra. The cold front may stall initially in the northern Sierra on Sunday.

Updated Snow Totals- Total Sierra moisture will be higher in the southern Sierra from Mammoth or even further south. Up to 3-4 inches of precipitation are possible with 3-4 feet of dense. Further north towards Tahoe I am expecting 20-28 inches. The cold front due Sunday morning may stall near the northern Sierra range bringing lower temps to the Lake area resorts, Mammoth sits higher and will benefit slightly at the summit, but temps will be warmer due to less cold air. Winds Saturday are a red flag for quality as snow is falling. Sunday sees less wind.

Below: Cold front over the northern Serra range at 10K (-8C) with warmer air still hovering further south towards Mammoth or Big Bear on Sunday. Avalanche danger will be high with this storm. You might consider heading north for a bit less snow but the higher quality on Sunday. Many summits might not be open Saturday or early Sunday. 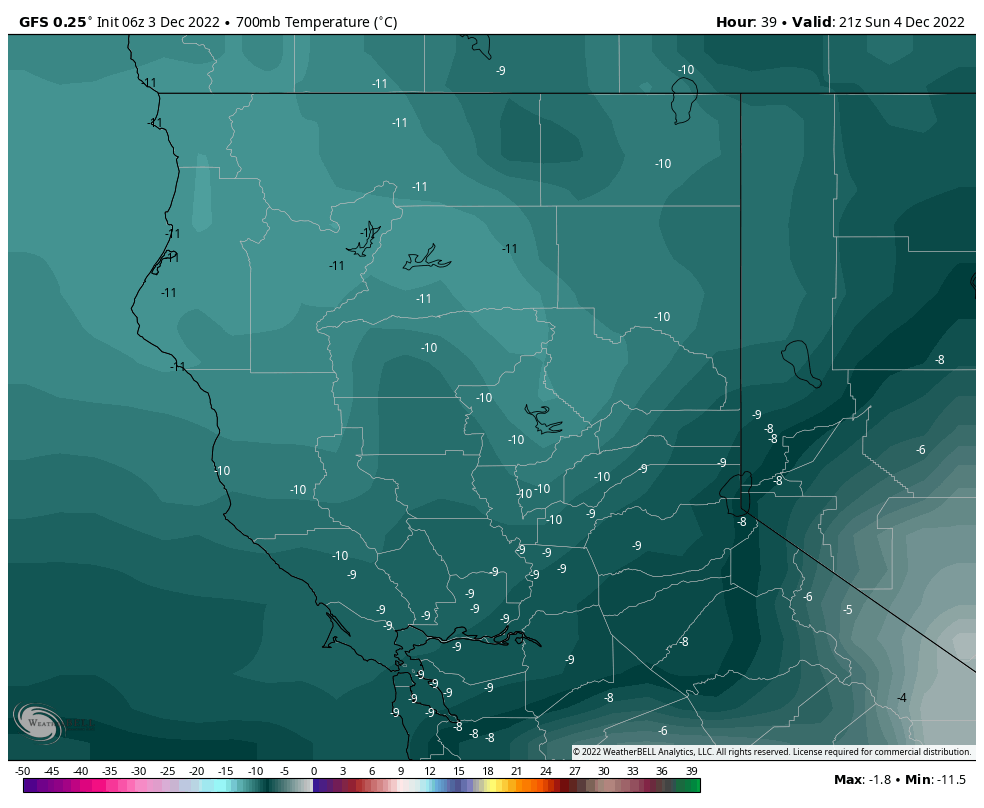 Below: Total precipitation through Sunday mid-morning. Higher amounts are noted in the south (3-4 feet) with 2-3 feet possible further north (Dense snow other than perhaps summits). Less snow will fall at the bases! 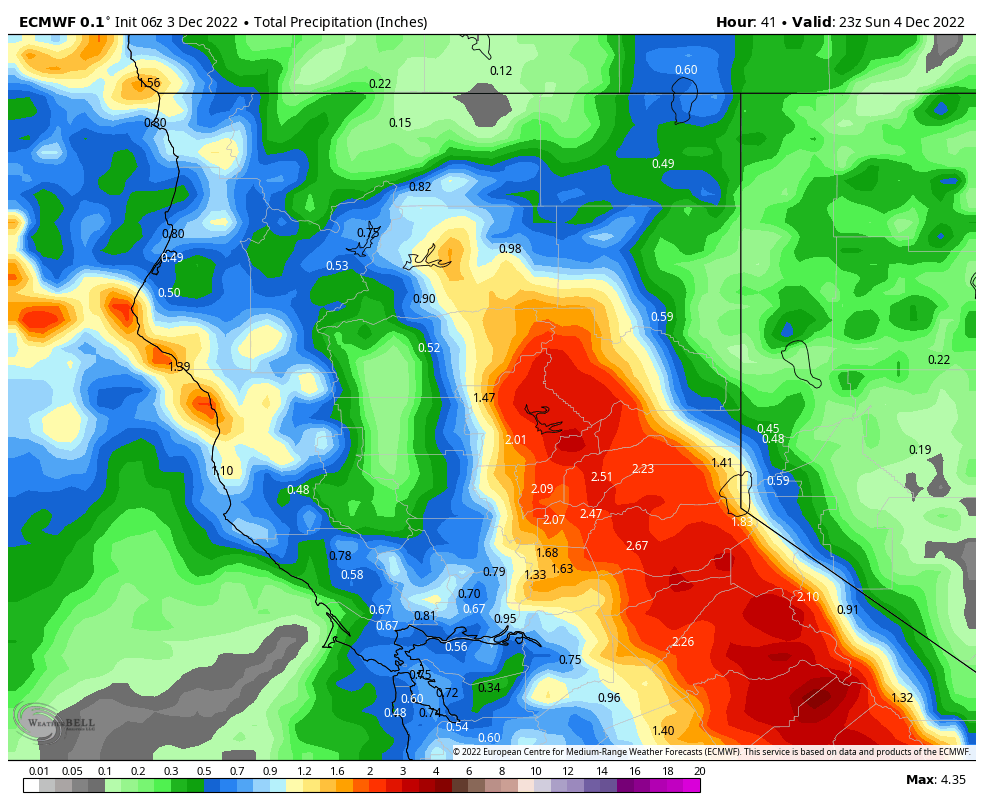 I am on my 5th day of double digits, all with high quality. On Thursday, I returned to Crystal for the opening of the South Back hike terrain. 8 inches of feathers had fallen the night before on top of the 18 inches from Wednesday (26-27 inch storm totals). The ropes dropped around 11 Am. After post-holing (Snowboarders have a huge disadvantage on this hike/flat traverse) for 45 minutes reached the King and had my best run of the season. Untracked, windless, dry-density fluff that was bottomless. Crystal Mountain Patrol rocks!

Below: @powderchasersteve in the white room Thursday at. Crystal. 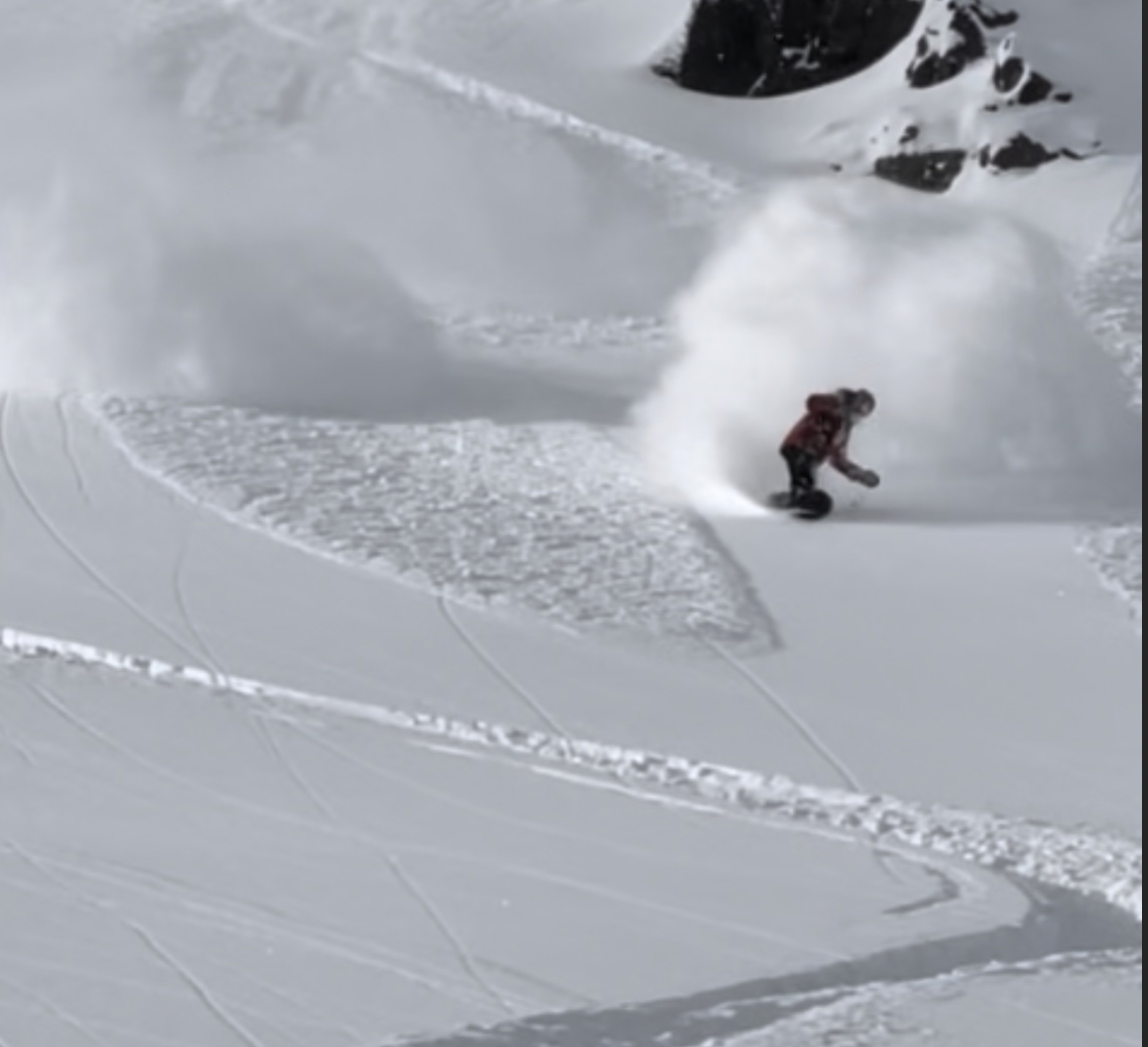 The deep powder was falling in the Tetons Thursday night and my chase to Targhee or Jackson came to an abrupt halt Friday morning when all E/W roads from Idaho to Wyoming closed for visibility and wind. At 4 AM my hunt for pow was shut down (End of the chase). Up to 21 inches fell at JHMR in 24 hours with 12 at Targhee. There's nothing worse than watching telemetry, webcams get deep with no possible routes in.  I am currently in Idaho Falls posting.

Some big totals also fell in the Sierra Thursday/Friday (Very strong winds Thursday) where many resorts are reporting 18-22 inches. This was a cold, but a very windy event with many lift closures Thursday. Look for openings on Friday. This event was well handled by the models.

The hunt for deepness for the weekend will be confined to the Sierra Range from Saturday PM to Sunday. The models show up to 2 or more inches of water. Snow fills in Saturday night from south to north (Mammoth might start to see snow as early as Saturday morning). The last chair Saturday could be decent in the southern Sierra, while the northern areas grab the deepest periods Saturday night to Sunday. Expect slightly warmer temps than the previous storm and less wind. This is a good storm to chase.

Below: Departing storm over the Rockies with a new storm moving down the coast from the PNW Saturday/Sunday. This low tracks along the coast in the PNW provide deep snow for the Olympic Range (Coastal) and very little snow inland in the Cascades. The system nudges inland over California by Saturday.

Below: You can see snow filling in from south to north under SW flow Saturday peaking in the PM for most areas. Expect 2 feet or more at the Sierra Crest. The southern Sierra might see higher totals. Ride late Saturday further south or most anywhere in the Sierra range for Sunday morning. Winds are not going to be as much of an issue as the previous storm. Temps will be a bit warmer providing medium-density snow at the upper elevations. You can also see snow filling in for the Wasatch, Colorado, and Tetons for Monday (end of the map range).

The Rockies remain a bit less certain on totals. Bottom Line Rockies: High confidence of moderate or deep snow returning to Utah, Wyoming, South- Central Idaho early next week as moisture feeds north under SW flow from the Sierra storm. Lower confidence in amounts. Currently estimating 6-12 inches for many locations in the Rockies, especially for Utah, Idaho, and the Tetons-(Wildcard sitting a bit further north). Monday is likely the best day to chase in these areas. Monday/Tuesday will offer some decent totals for Colorado favoring western areas, but a healthy jet that should bring some upside surprises to many resorts especially the south-central mountains, and perhaps streaming up to Steamboat and further east from Glenwood to Summit County (not the perfect I-70 storm, but SW flow can bring upside surprises on the western side, and also at Breckenridge). It's simply too far out to pinpoint totals.

Below: Total snowfall through Tuesday with the next system providing a narrow band of deep snow stretching from the Sierra Sunday due east over the Rockies by Monday. The Sierra will be deepest Sunday with the Rockies grabbing some decent leftovers Monday and Tuesday. 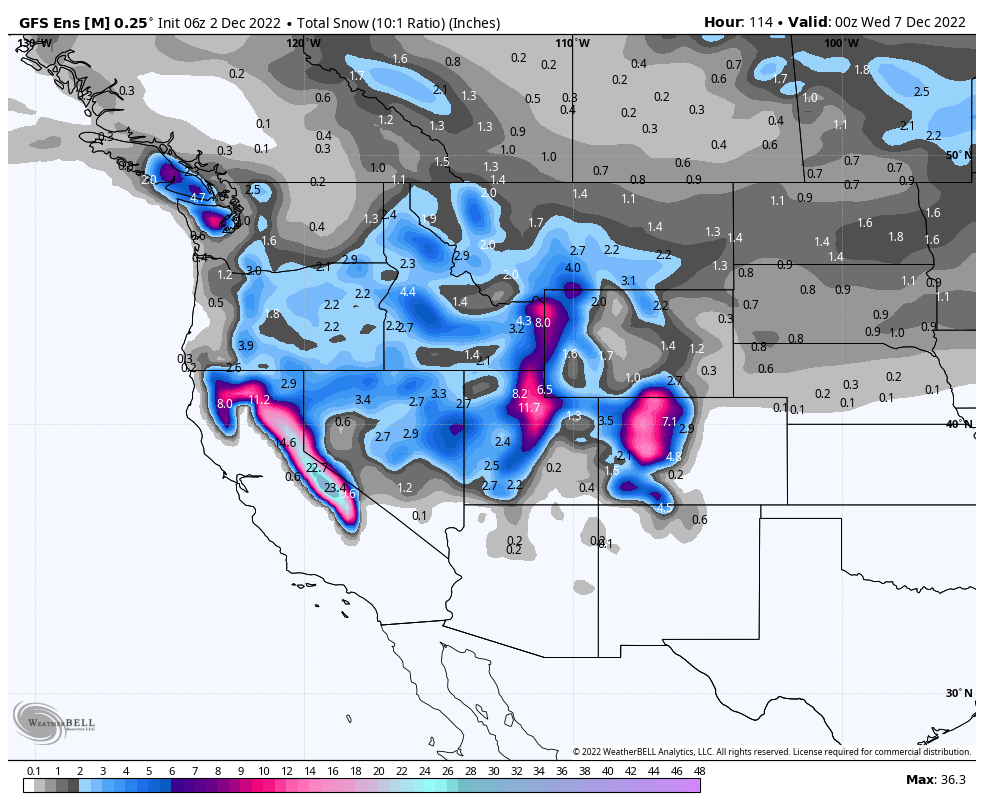 Below: Brief ridging in the PNW with some low pressure still noted over Southern -California next Wednesday, December 7th. The original low slowly pushes south 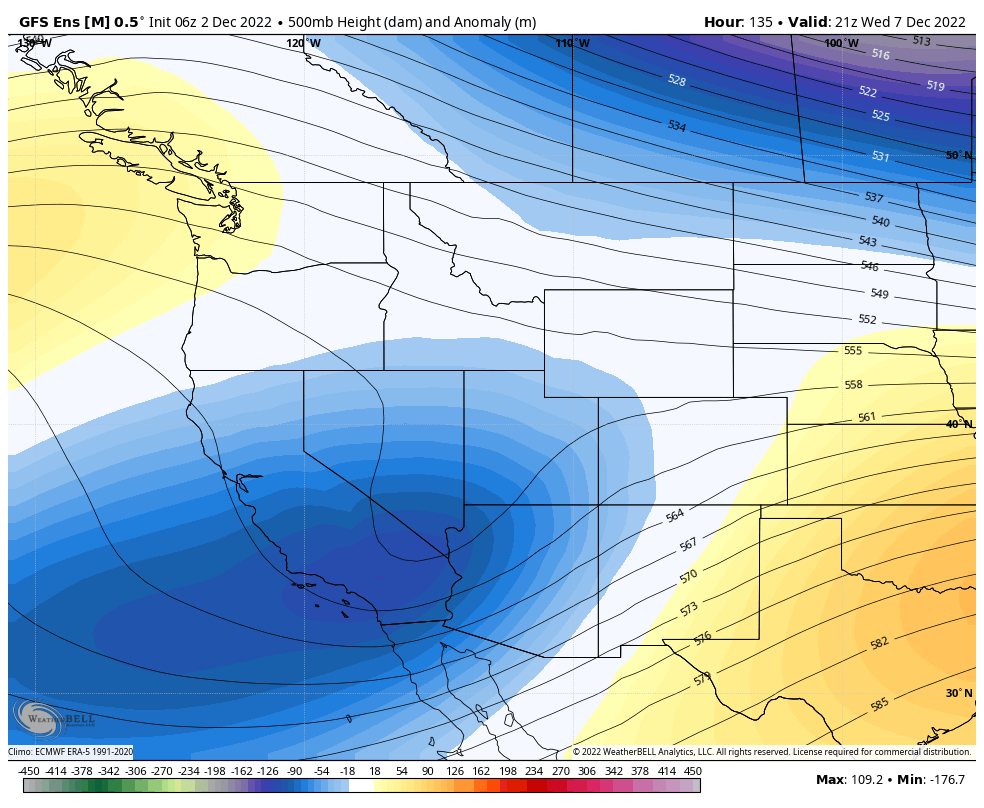 Below: Low pressure might return to the PNW and overspread the west late next week in the December 8-9 time range. Low- to moderate confidence this far out. 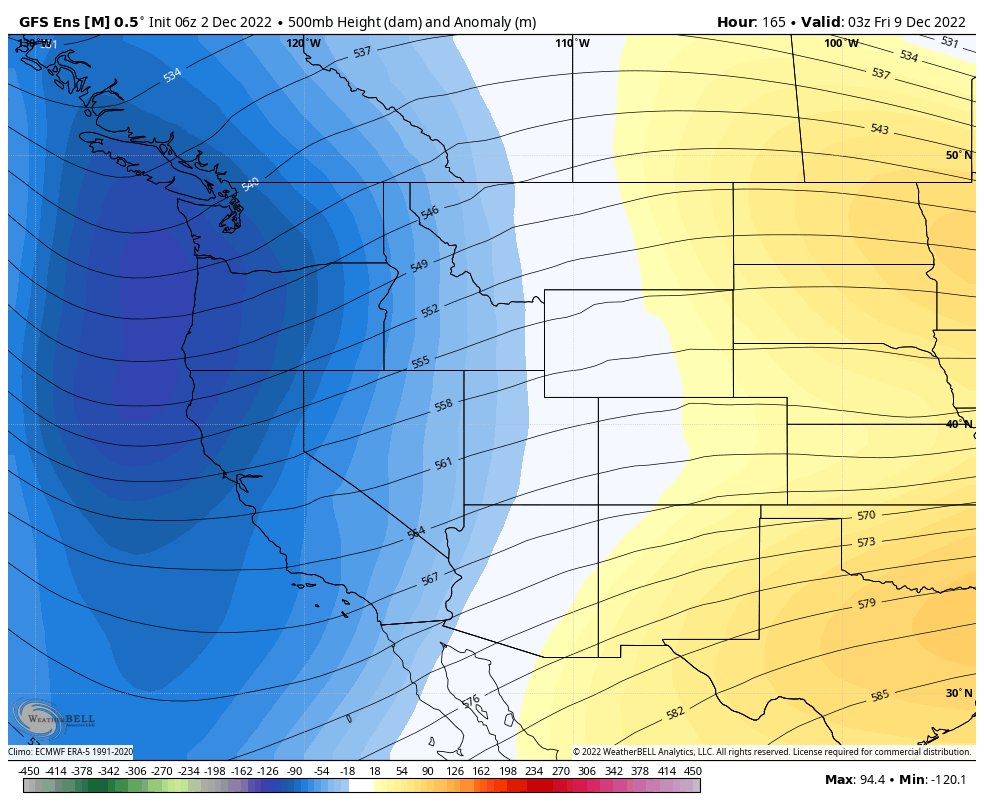 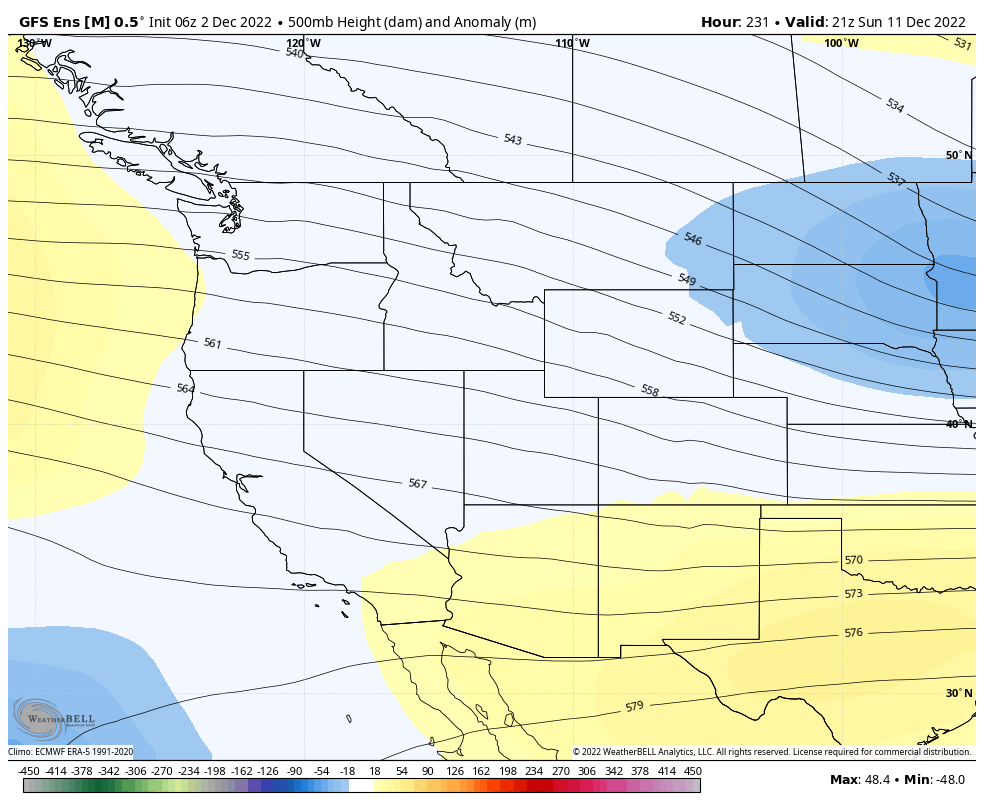 While my 5 day chase came to a halt today, I look forward to the weekend and early next week. You can follow me on Instagram @powderchasersteve for the latest in photography, travel, and of course deep powder.