Looking back for a moment, the weak storm that moved across Colorado on Saturday morning delivered just a few flakes to the northern and central mountains while the southern mountains picked up a coating to 2 inches. The rest of Saturday and Saturday night was dry.

Now on Sunday morning, we are enjoying temperatures that are 5-10 degrees cooler than on Saturday morning and this has allowed crews to fire up the snow guns. Temperatures just before sunrise on Sunday were in the teens and low 20s, which, combined with a dry atmosphere, is favorable for snowmaking. 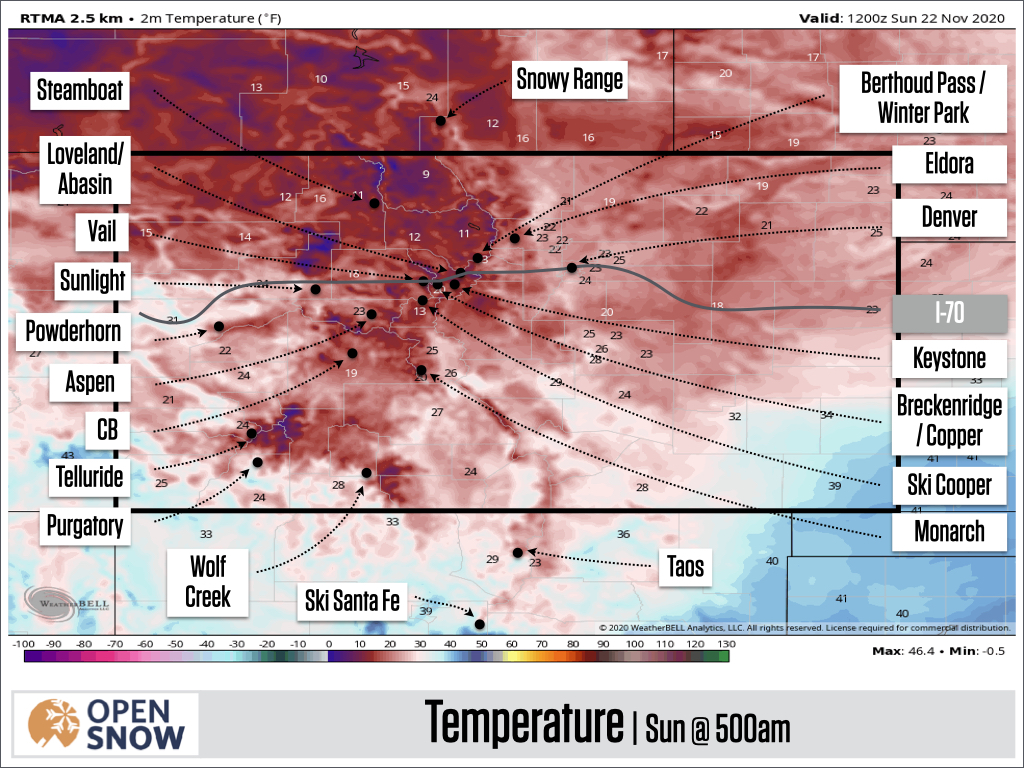 Sunday will be dry for most of the state with more clouds later in the day as moisture moves in from the southwest.

On Sunday evening, snow will begin for the far southern mountains.

On Monday, steady snow should fall over the southern mountains with significant accumulations while other mountains will see on-then-off snow showers with little or light accumulations. Temperatures will be warm with a snow level of around 9,000 feet and thicker snow quality.

On Monday night through Tuesday, the main storm energy will move across Colorado, temperatures will cool, the winds will switch to blow from the west and northwest, and this is when all mountains should see decent snow accumulations.

Total snow should be 10-25 inches in the southern mountains and 5-10 inches for other mountains. Monday will bring the deepest snow to the far southern mountains, then Tuesday should be the best powder day overall with new snow for all mountains and a lighter, fluffier snow quality. Of course, there is still limited terrain and thin coverage (the exception is Wolf Creek which is nearly 100% open).

Let's dig into the forecast details just a bit.

The best chance for the deepest snow will be around Silverton and Wolf Creek where a wind from the south and southwest is favorable. The multi-model forecast from the University of Utah for Wolf Creek shows an average of about 20 inches at Wolf Creek which is supported by other models and could wind up being too low as Wolf Creek often 'over produces' during a multi-day storm with southwest winds. 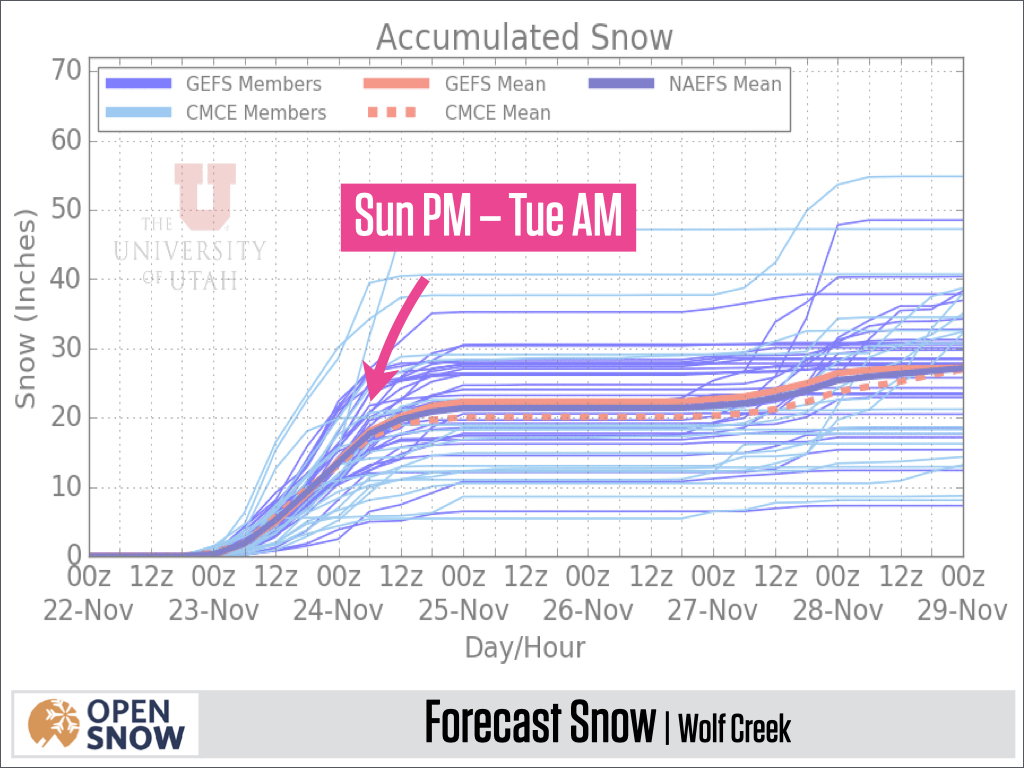 With a high snow level early in the storm, the deepest accumulations should favor the higher southern mountains like Wolf Creek and Silverton, though Purgatory should also see maybe 10 or more inches thanks to a favorable southwest wind. Telluride is in the southern mountains but does not do well with a south or southwest wind (hit or miss) and therefore they might see the best snow later Monday night when the wind direction changes.

For the central and northern mountains, the southwest wind on Monday will not be favorable. Instead of steady snow, these areas should see a few snow showers and also breaks of dry weather and sunshine. The multi-model forecast from the University of Utah for Loveland in the northern mountains shows an average of 6 inches which feels reasonable though that forecast could be a little low if snow showers crank up on Tuesday in favorable northwest winds. 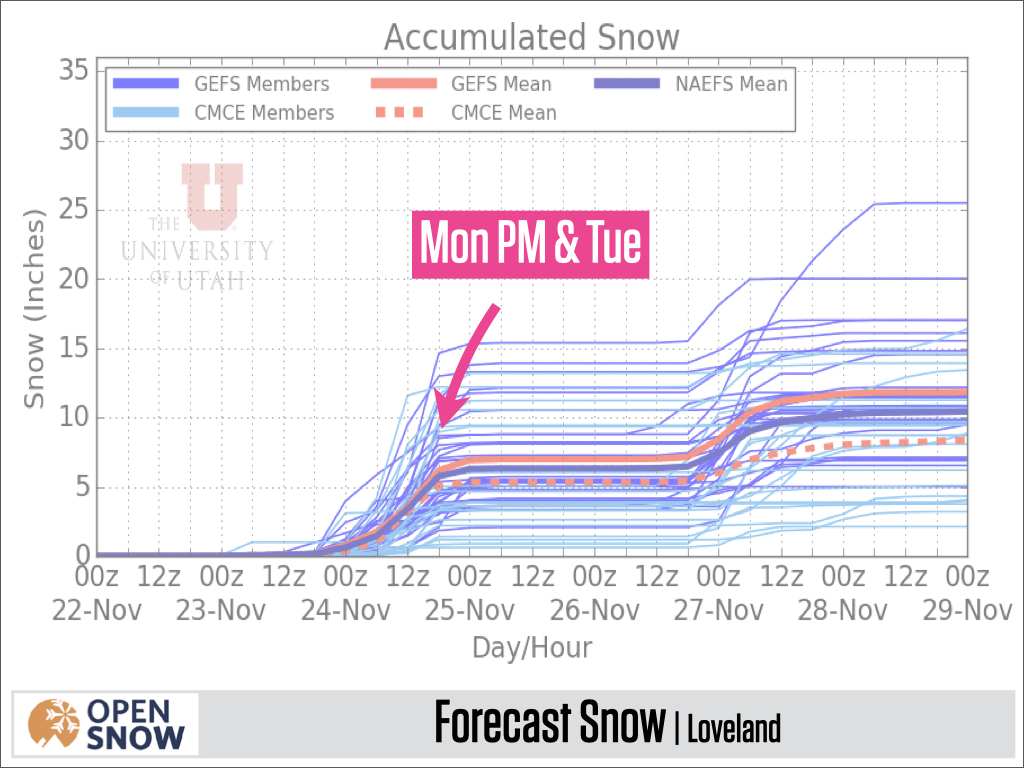 When I look at high-resolution forecasts, such as from the CAIC WRF 2km model below, I try to adjust them based on the wind direction. 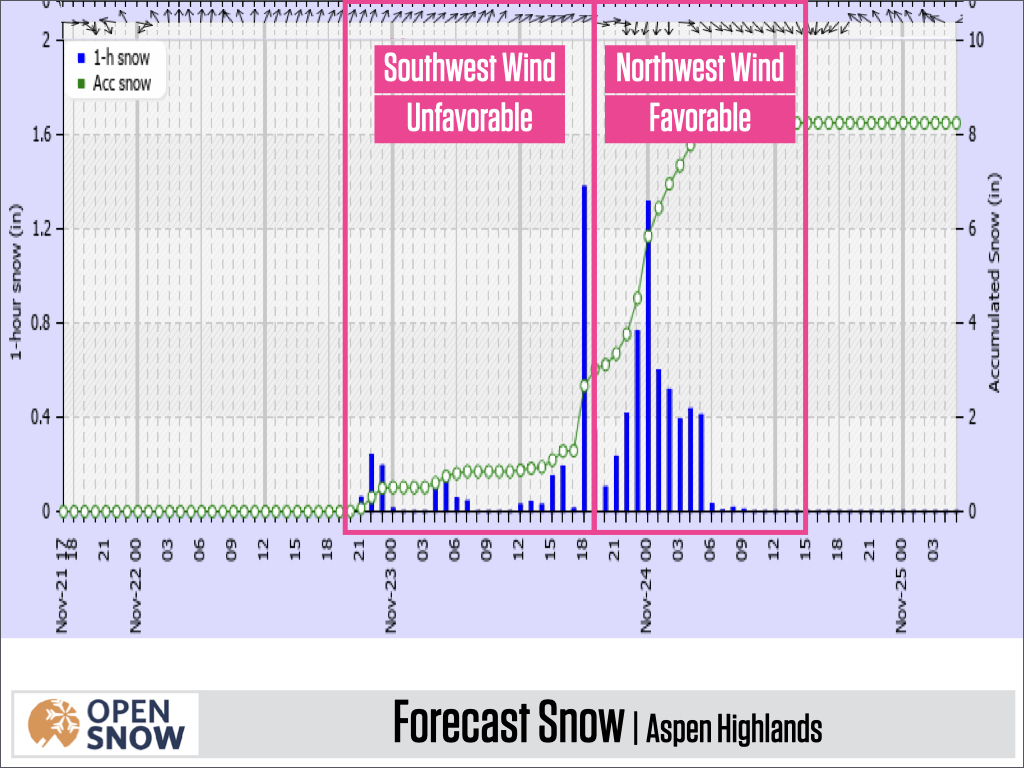 But about 3 of these inches are forecast to fall during the part of the storm with unfavorable southwest winds (wind direction shown by the arrows at the top).

So if I take those 3 inches out of the total (since the probability of snow during southwest winds is lower) then we're left with a likely lower bound of 5 inches. If those +/- 3 inches of snow materializes during the unfavorable southwest winds, just due to luck, then we'll see totals of 8+ inches. Hence the 5-10 inch forecast range for the northern and central mountains.

Following the storm on Tuesday, the weather from Tuesday night through Thursday morning should be dry.

Our next chance for a storm will be from later Thursday through Saturday morning. At this point, all models show this storm splitting as it moves toward Colorado with most of the energy staying to our south. 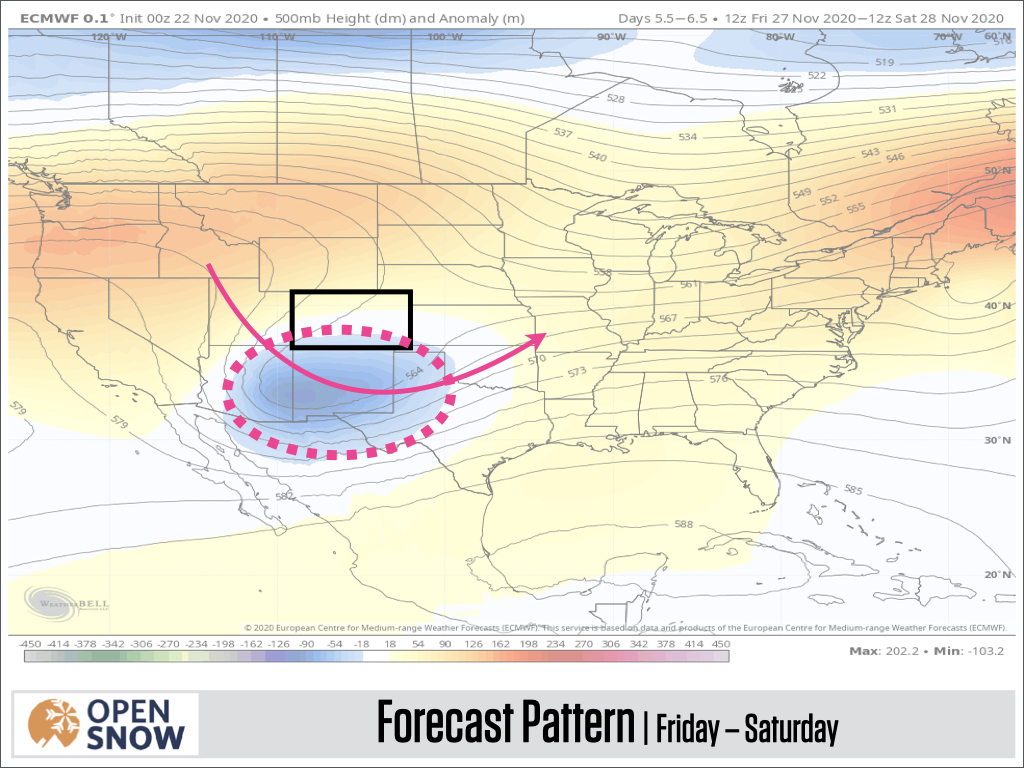 Even though snow totals from this Thursday night to Saturday storm are likely to be very low (or zero), the upshot is that the storm will bring colder temperatures which should allow for a day or two of solid snowmaking across the state. 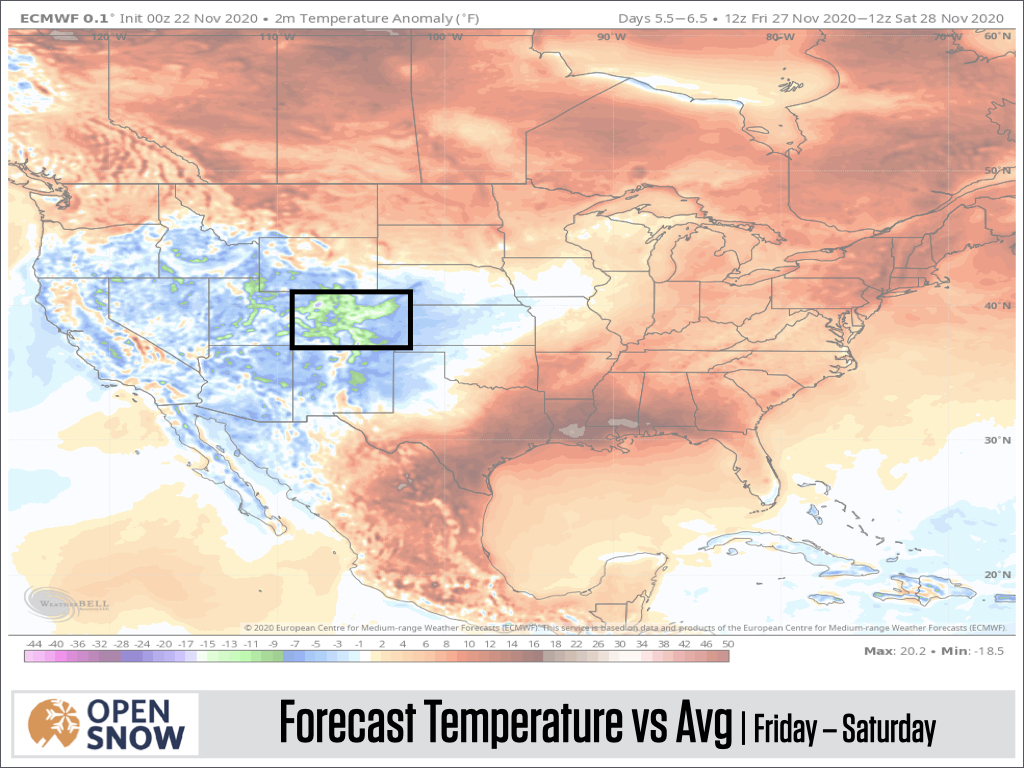 Yes, talking about snowmaking temperatures is reaching a bit in order to put a positive take on the upcoming weather pattern, but if the atmosphere won't deliver snow from the clouds, we'll at least take cold enough temperatures so that we can make snow from machines.

Looking out into December, our next chance for a storm will be around December 2-3, though this system looks rather weak with low moisture, so my expectations are quite low.

The longer-range models continue to hint that the pattern will become more active starting around the middle of December. Maybe we can get lucky with a few good storms between now and then and perhaps a more exciting pattern will unfold during the second half of the month. 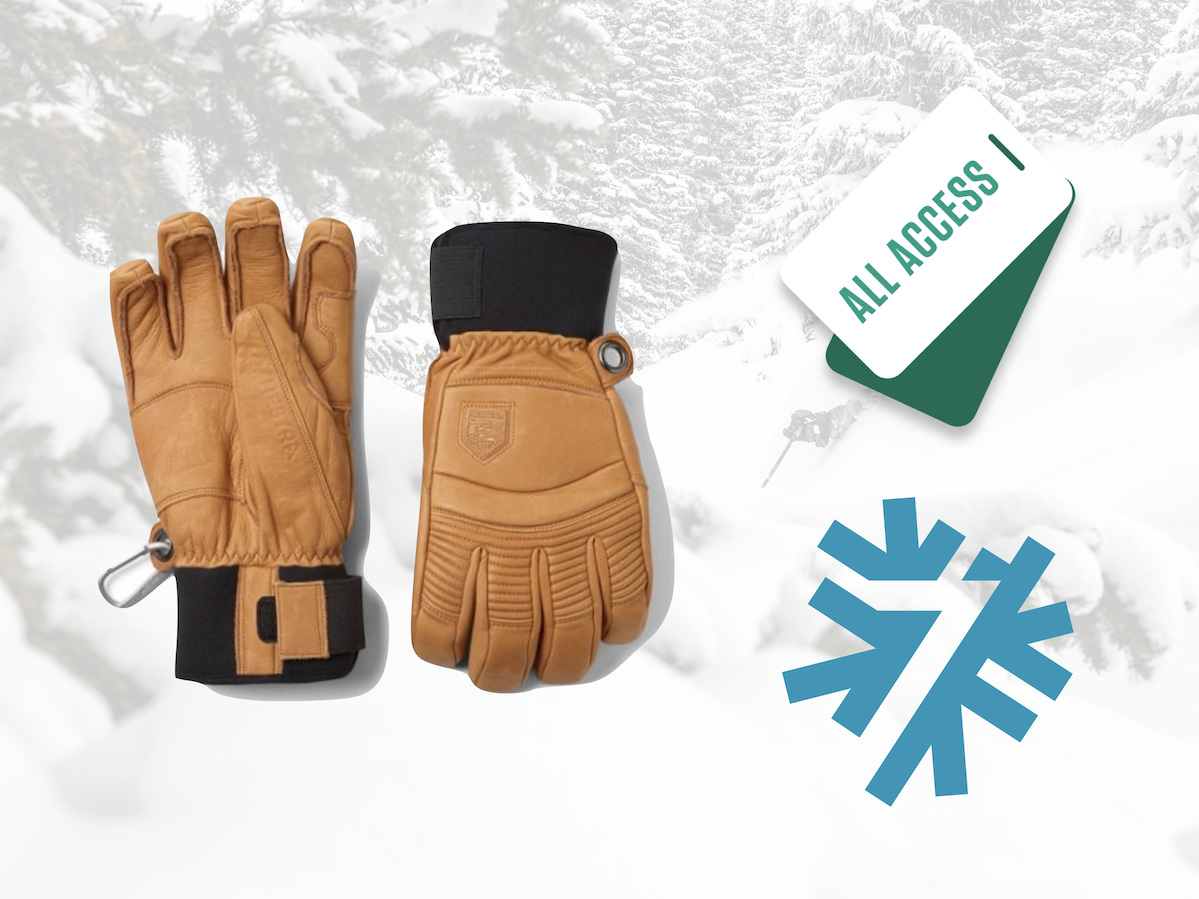