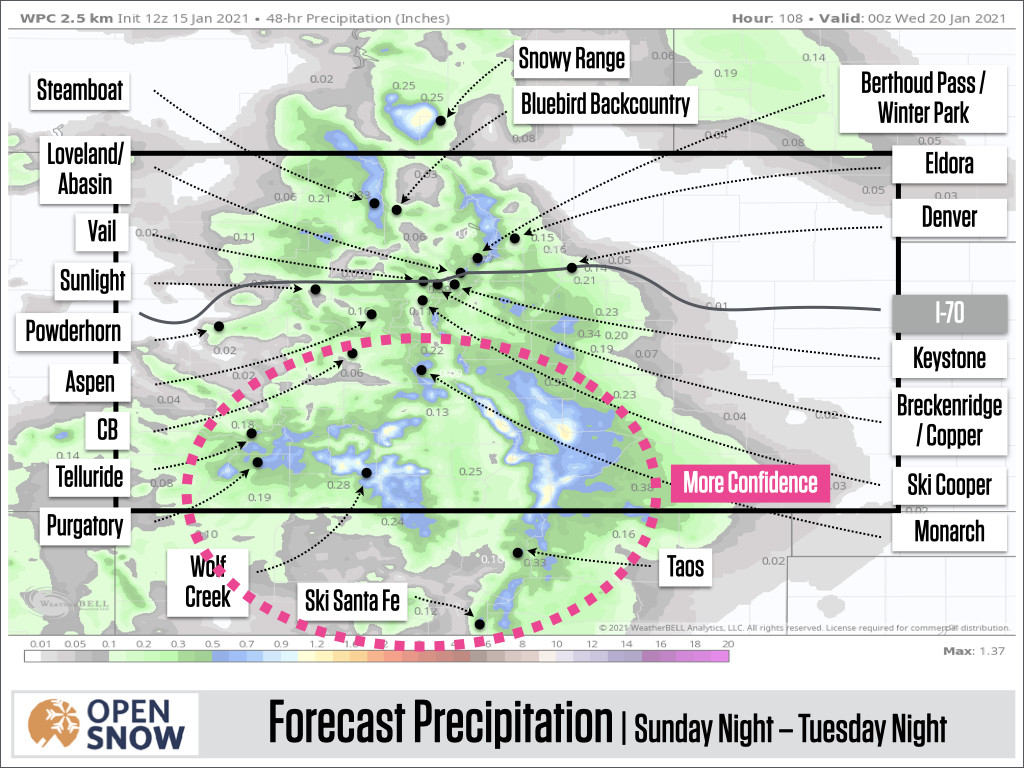 Friday will be dry with continued gusty winds along the divide. On Friday night into Saturday morning, a fast-moving system will bring a coating to a few inches of snow to most mountains. Then from Sunday night through Tuesday night, a hard-to-forecast storm has the potential to drop moderate or significant snow amounts especially over the southern and eastern part of Colorado.

Thursday's wind gusts were not quite as fast as those that we saw on Wednesday night, but areas near the divide still saw gusts near and faster than 50mph. Otherwise, the day was dry and partly-to-mostly sunny and chilly with temperatures in the single digits and teens.

Friday will be a little more comfortable compared to Thursday with chilly morning temperatures rising into the 20s by midday and afternoon. A few spots will continue to deal with fast wind gusts especially near and just east of the divide. Our new wind gust map layer is an AWESOME tool that I now reference multiple times per day especially during wind events like this one. You can zoom far into the map and can also animate the wind gust forecast 18 hours into the future with updates every hour. 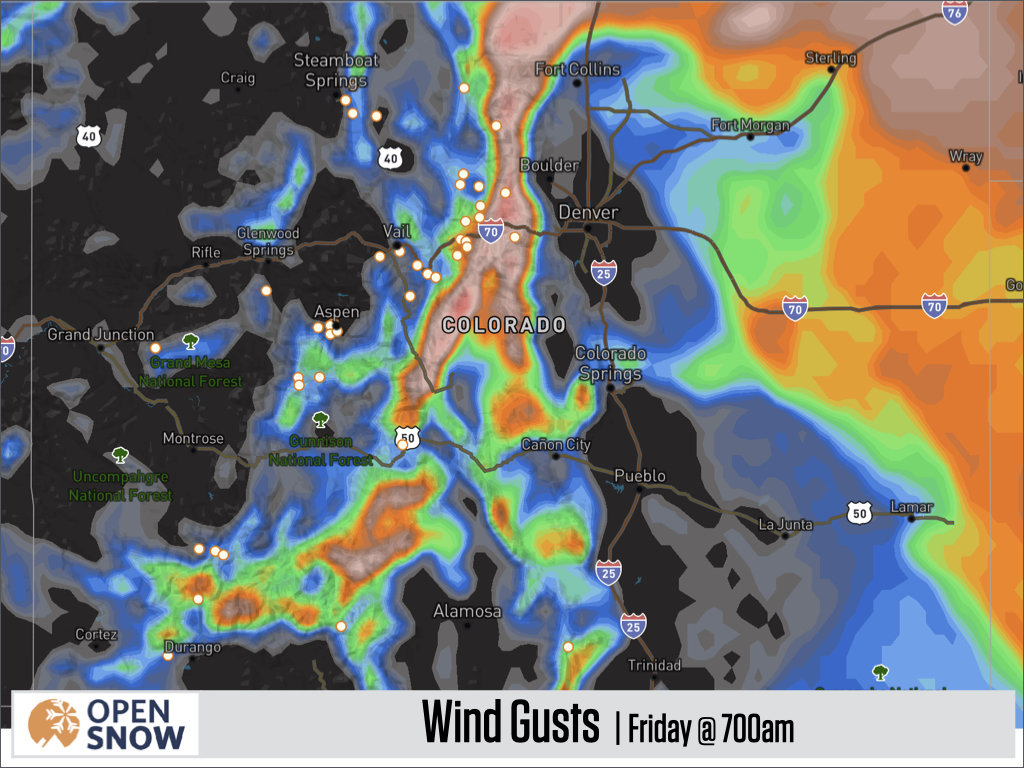 Saturday will offer a little refresh of snow during the morning. Flakes could fall anytime between about Friday night at midnight and Saturday at noon with the best chance likely around and just after sunrise on Saturday morning. This will be a fast-moving storm with limited moisture, so expect low-end snow amounts, likely just a coating to a few inches. The best chance for these accumulations will be over the northern mountains, some central mountains, and on the north side of the southern mountains (Telluride, Silverton). The graphic below shows the forecast precipitation, so multiply by about 15 to estimate snow. 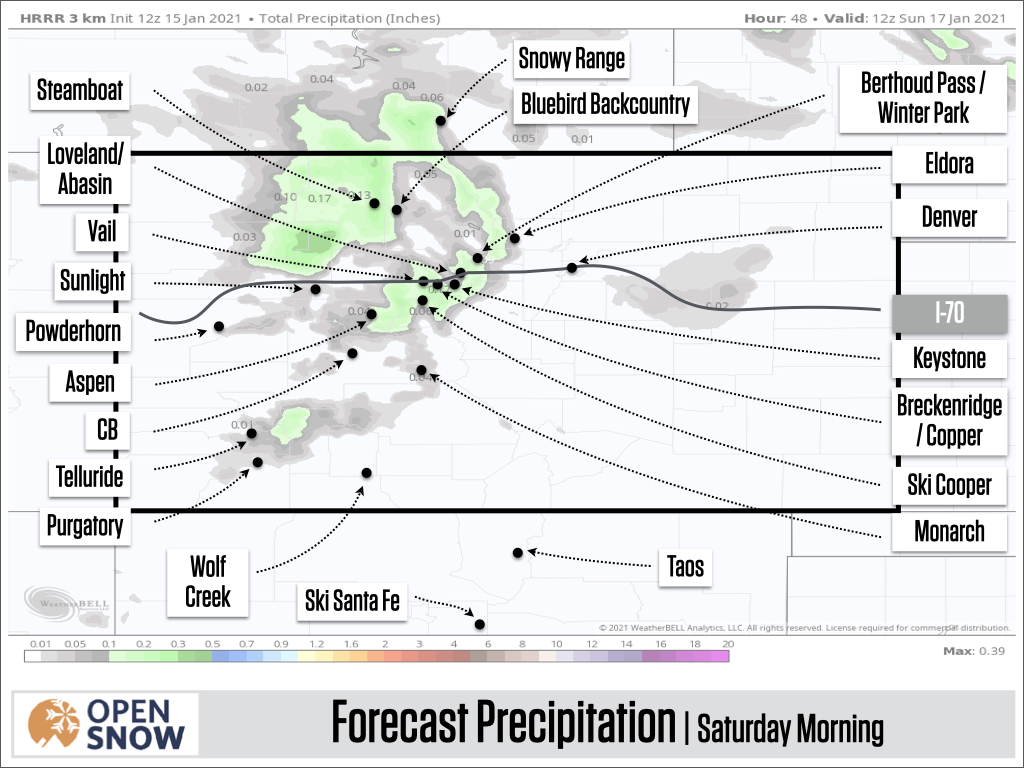 Sunday will likely be a dry day for all areas of the state. We'll just need to be patient as the next storm will arrive during the evening.

Sunday night through Tuesday night has a lot of potential for some spots but I am not yet super confident in the snow forecast. I think about this time period in two parts.

The second part from Monday evening through Tuesday night is when the storm will dive to the southwest and we should see winds blow from the east and south. This wind direction, and this storm track, should favor more snow near and east of the divide and over the southern mountains. It's possible that some of these eastern and southern spots could have a real powder day on Tuesday, though I am nervous to commit to a "powder day" call for Tuesday because the trend in the models is to take this storm even farther southwest, away from Colorado, which could limit the storm's ability to drop significant snow here in Colorado. The map below shows precipitation and we can multiply by about 15 to estimate snow. If the precipitation does fall as expected, the snow could be fluffy on Tuesday thanks to cold temperatures in the teens. Next Wednesday, January 20 through the following Monday, January 25 will be active with chances for snow nearly every day.

On the downside, it's possible that storms could stay to the south and west of Colorado with just light snow for many of these days and maybe a burst of more intense snow sometime around the 24th or 25th.

On the upside, it's possible that multiple systems could bring storm energy to Colorado throughout these days, initially favoring the southern mountains and then bringing a lot of snow to all mountains around the 24th and 25th.

It's too early to know which of the two scenarios above will come to fruition, or more likely, what other scenario will actually occur. Keep your eyes on these days, especially the 24th and/or 25th, as there should be a powder day in this time period.

I will continue to post reader-submitted pictures to keep us motivated to ride even during periods of drier weather. Here are today's photos…from the air!

A friend and I were headed up the Dragontail Couloir in Rocky Mountain National Park when an unexpected localized storm blew in. We were maybe between a third to halfway up. With conditions not improving, we decided not being able to see the state of the cornice at the top of the couloir posed a serious risk, and we turned around. My friend snapped this shot of me skiing out the bottom of the couloir into the fan. We found out later that a friend was in the Elevator Shaft Couloir the same day (one ridge over) when it avalanched. He and the two other people present were extremely lucky they weren't caught. My friend and I spent the rest of that day having a blast skiing through the trees in another area of the park. It was a good reminder that sometimes you've gotta change your plans on the fly, but the reward is that more fun awaits!  -Ashley G. 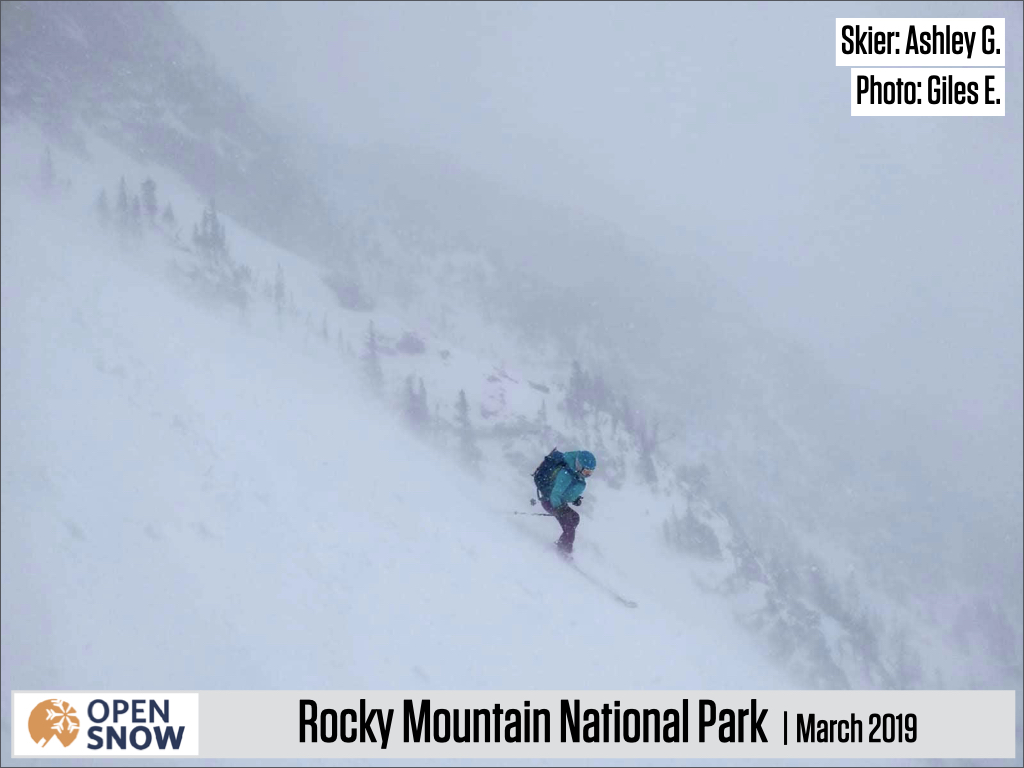