Snow on Monday, Tuesday, and Saturday 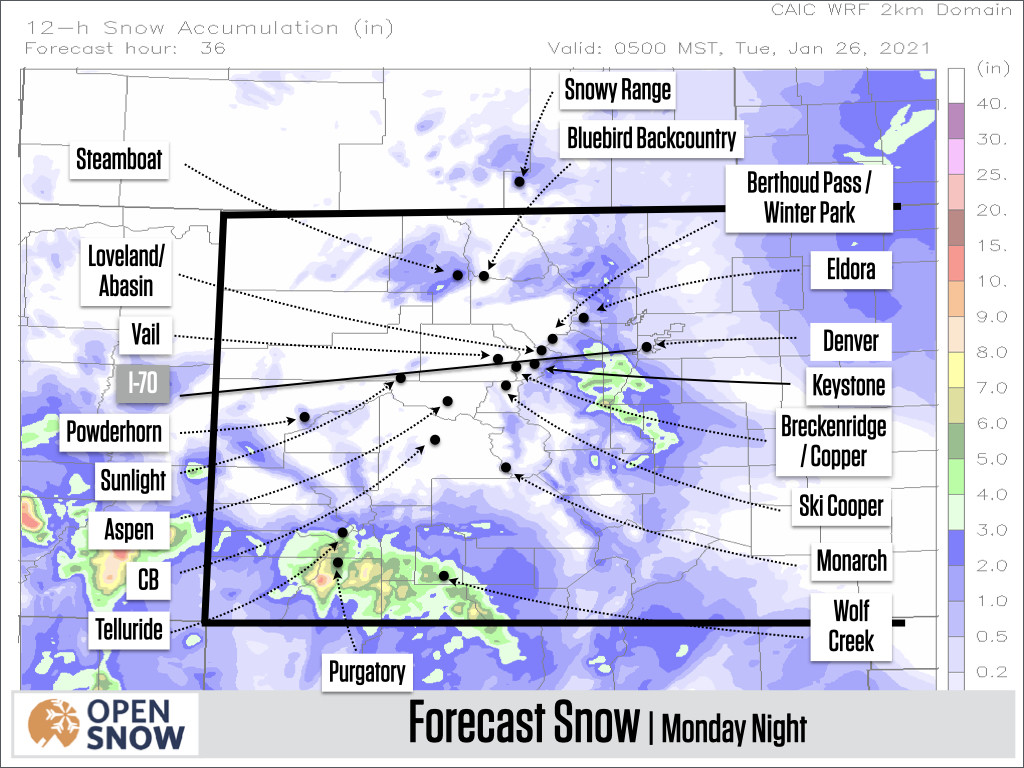 Waves of storm energy will continue to track from the southwest to the northeast across Colorado on Monday and Tuesday. The steadiest snow could be on Tuesday for most areas, but the details are more nuanced than that and I'll discuss more in the post. Looking further ahead, the next storm should bring snow from Friday night through Saturday, and another storm should arrive around February 3.

The far southern mountains saw additional snowfall of 2-10+ inches and most other mountains received just a coating to an inch or two.

The forecast radar from Monday morning to Wednesday morning nicely shows the multiple waves of snow, with one on Monday morning, another on Tuesday, and then northwest flow developing for a few hours Tuesday night to finish out the storm.

Snow totals look a little scattered on the map below. My best estimate is that one wave finishes in the southern mountains in the morning while another wave moves through some central and northern mountains during the morning and midday. Then a shot of snow will develop over the eastern part of the I-70 corridor late in the afternoon (more on that below). 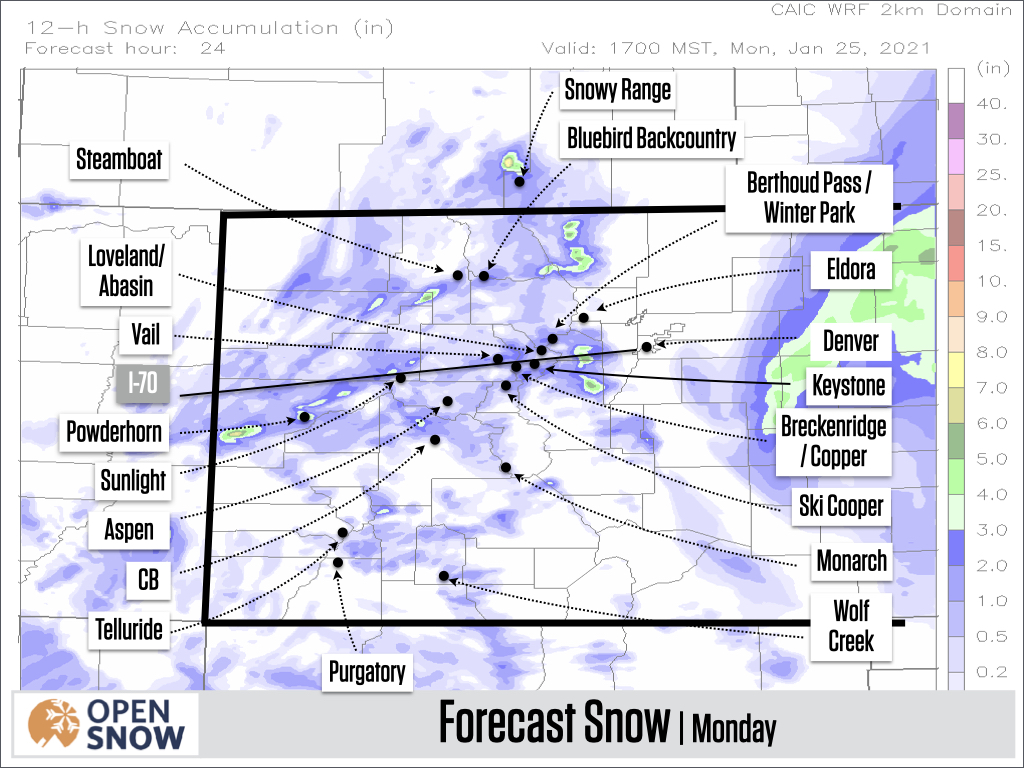 There will be two main areas of interest.

Mountains near and east of the divide near I-70 should see a burst of snow. While it looks like the best chance for this snowfall will be just south and east of most ski areas, Echo could see this snow, and, if the snow pushes just a bit farther to the west, it will be close to Eldora, Berthoud Pass, Winter Park, Loveland, Arapahoe Basin, Keystone, and Breckenridge. While I do NOT have high confidence that these areas will see a lot of snow, it's a close call so it bears watching.

The other area of interest will be the far southern mountains. The next wave of snow will arrive before sunrise and likely provide fluffy powder for Tuesday's first chair. 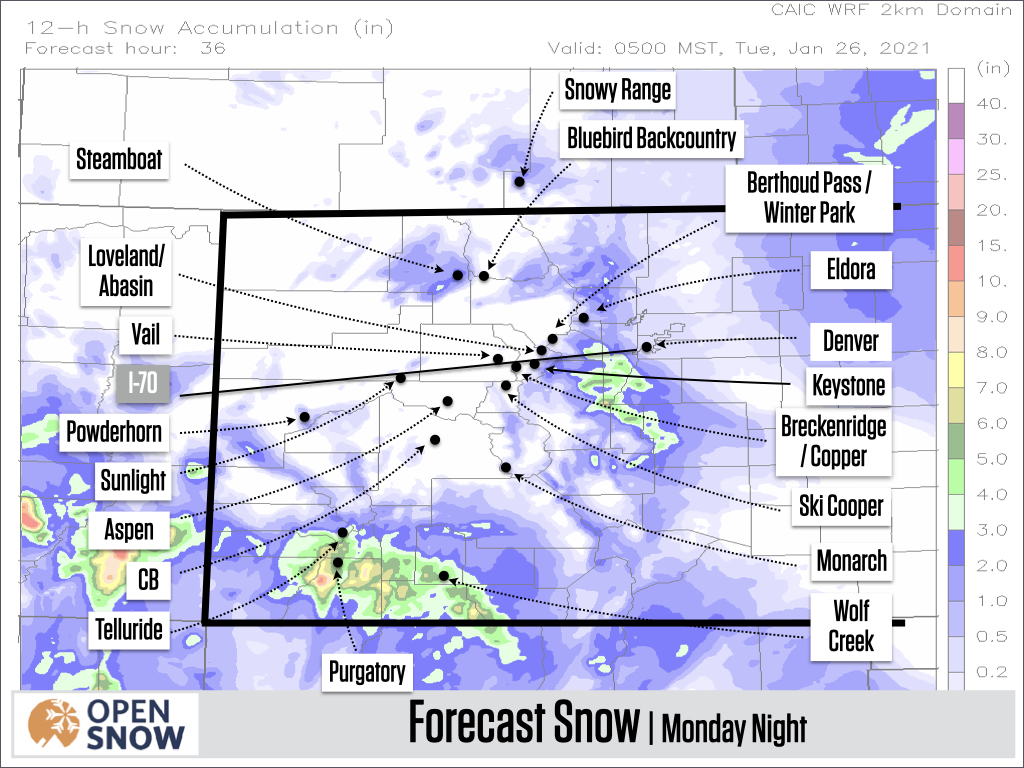 The wave of snow that will hit the southern mountains late on Monday night will move across all mountains on Tuesday and should bring at least a couple of inches of snow to most areas. 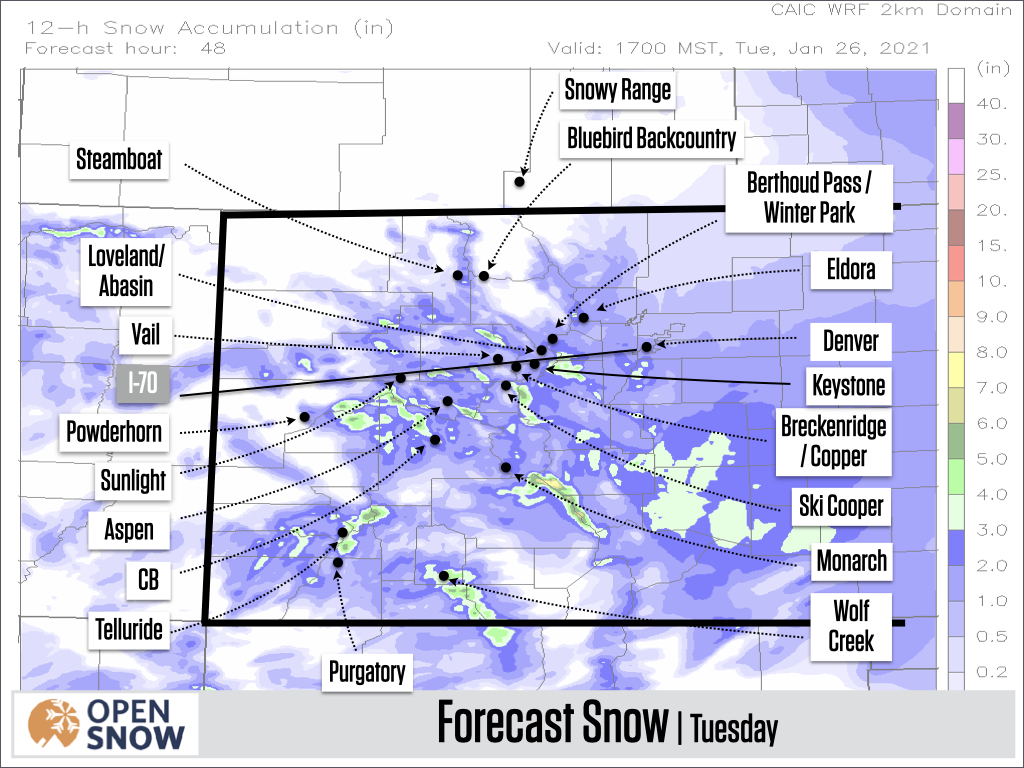 The storm will end with a period of flow from the west and northwest. This should keep snow showers going over the northern, central, and some southern mountains and will likely result in at least a few inches of new snow and fun/soft conditions on Wednesday morning. 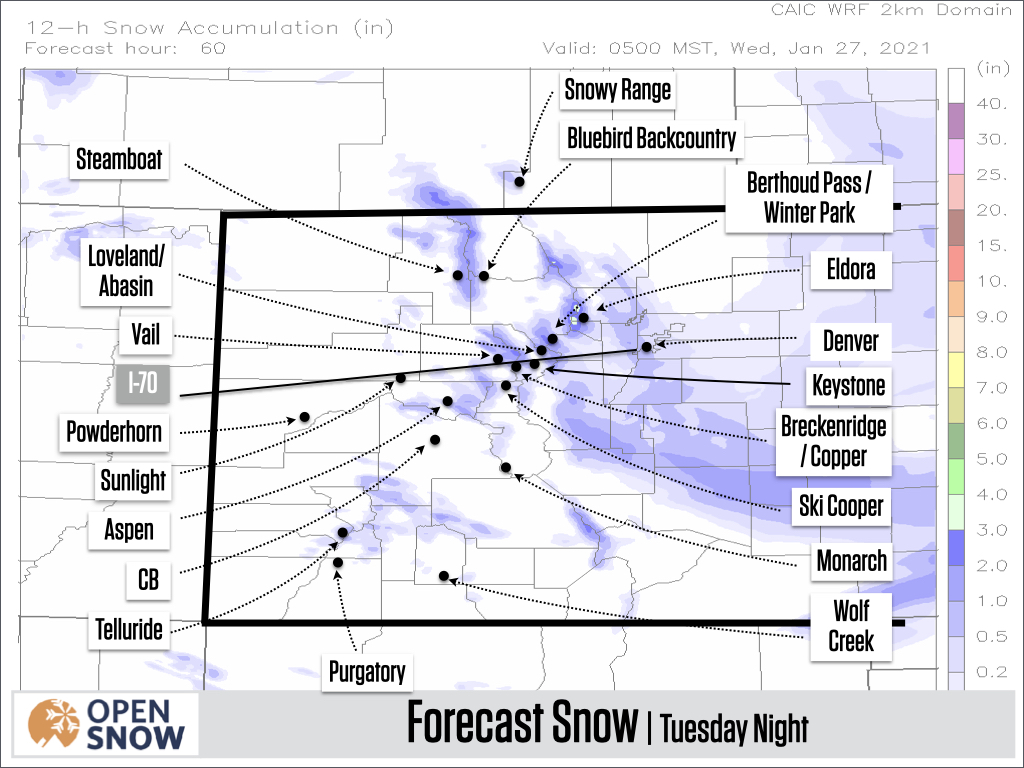 These days will be mostly dry. A few showers could sneak in on Wednesday, and completely dry weather is likely on Thursday and early Friday. Then the next storm could deliver snow as early as Friday afternoon.

The first storm in the longer-range outlook will bring snow between Friday afternoon and Sunday, January 29-31. Everything about this storm screams "moderate". Not too weak. Not too strong. Somewhere in the middle. For snowfall, my initial estimate is 2-10 inches and Saturday could be the softest day to ride. 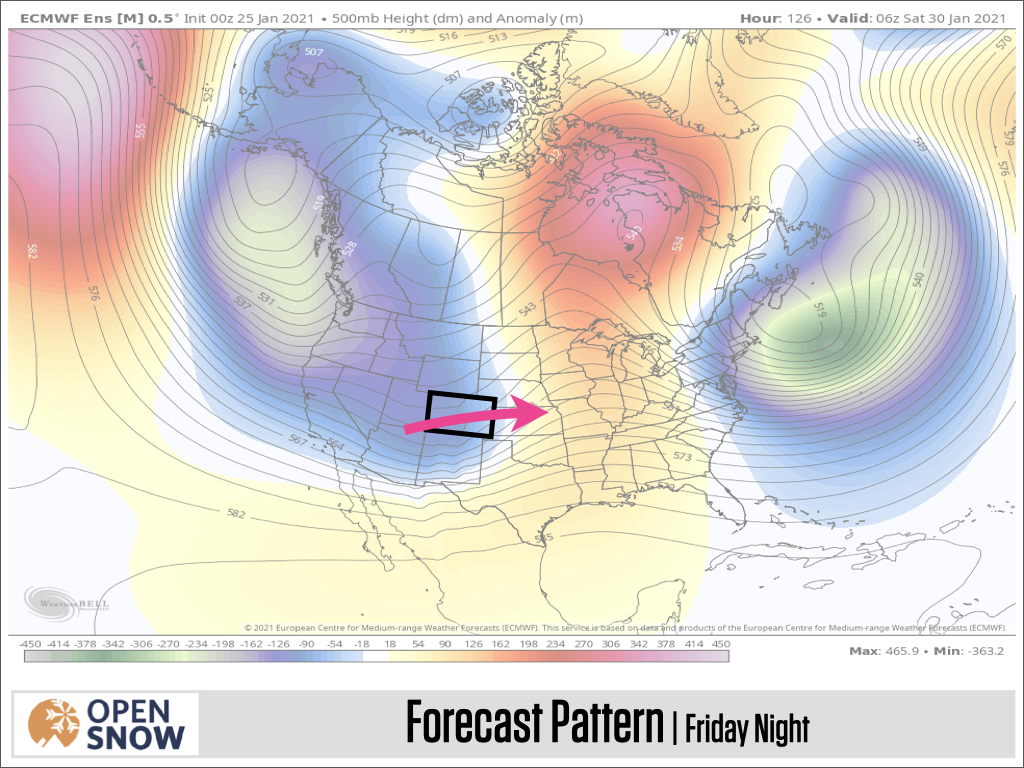 The second storm in the longer-range outlook should arrive later on February 2nd or more likely on February 3rd. This storm could be just the first of many waves of energy that could bring snow to Colorado on-and-off over a 5-day period. 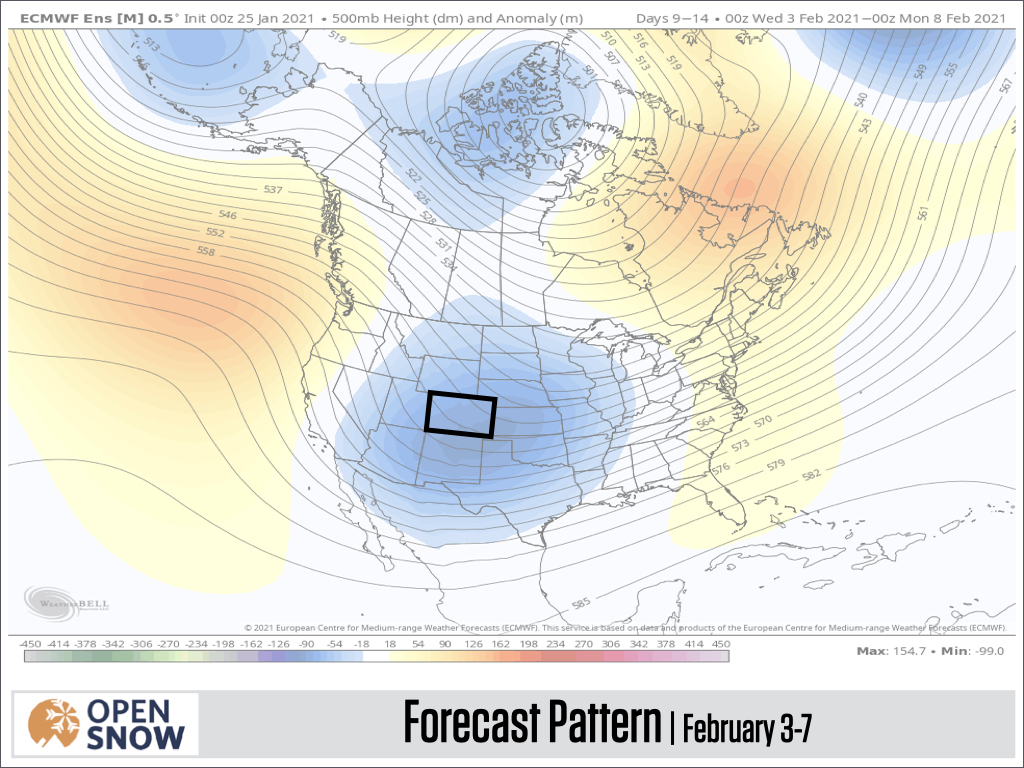